When museums are closed, there is still a wealth of available information online – a chance to familiarise yourself with specific works of art in your favourite collections or ones you have never visited before. The content available on a museum website is not only helpful for a curious art-lover, but it is an important source of information for curators, art historians, dealers and other art-world professionals, who use it for organising museum exhibitions, auction catalogues and scholarly research.

This article is meant to explain what type of general content one may encounter when using an online museum collection search tool. It is organised based on the example of a portrait by renowned Russian artist, Ilya Repin, at the Metropolitan Museum of Art in New York, but is applicable to most museums that make their information publically available. Museums will reopen, it is a matter of time, so now is the chance to start planning your trips and thinking about the works of art relevant to you.

Repin at the Metropolitan 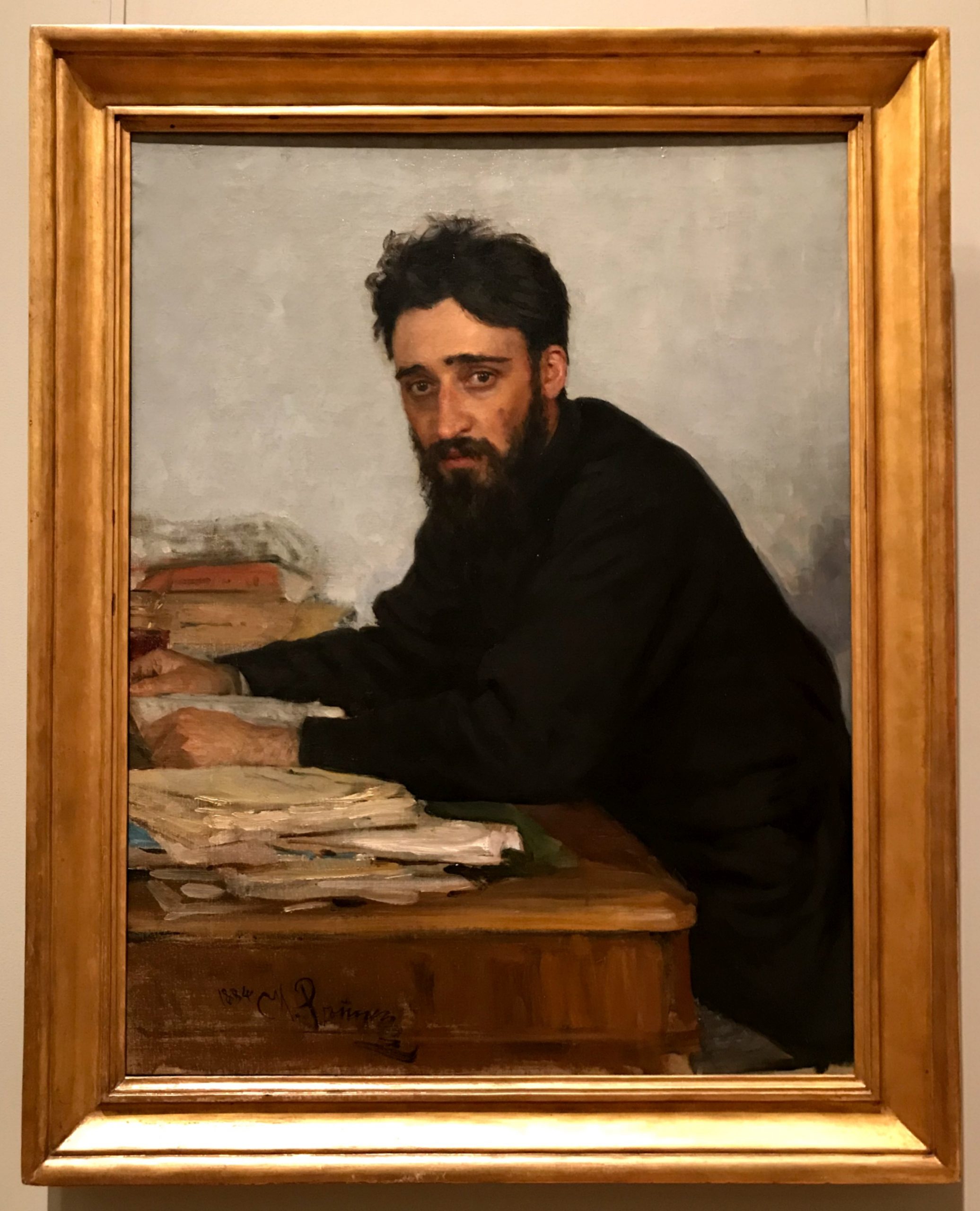 Portrait of Vsevolod Mikhailovich Garshin by Ilya Repin at the Metropolitan Museum of Art, New York. Image courtesy of the author.

A museum as large as the Metropolitan Museum of Art is full of masterpieces and it is easy to overlook many when visiting in person. One painting that has been on view at the Museum for many years is a portrait of Vsevolod Garshin by Ilya Repin.

Ilya Efimovich Repin (1844-1930) is considered one of the leading Russian portrait painters and a central figure of the Russian realist artist group, The Peredvizhniki (The Wanderers or The Itinerants). Repin’s portraits show an exquisite ability in capturing both physical resemblances, as well as the internal state of his sitters, who were predominantly intellectuals and artists.

Vsevolod Mikhailovich Garshin (1855-1888) was a Russian writer, who in his short life completed a single volume of just 20 stories on the themes of nature, compassion and the struggle against evil. As seen in the painting, the piles of loose paper and files, as well as the book in Garshin’s hands, are all references to his writing profession and literary genius. Repin’s friendship with Garshin provided him insight into the writer’s tormented mind, which he fully encapsulated in the haunting, intense, yet somewhat aloof, gaze – an ominous preview of the writer’s tragic suicide four years after the portrait’s completion.

Repin’s portrait is located in the 19th- and Early 20th-Century European Paintings and Sculpture Galleries of the Metropolitan. When at a museum in person, rarely does one take the time to learn more than the artist’s name and painting title, perhaps, it may be wise to do so. The goal of the museum is to give key information to the visitors without overburdening them. Hopefully, some works of art will have stood out and one will be inclined to research them online later.

The most obvious source to learn more would be the museum website, where you can usually search for the artist’s name or title of the work. Upon landing on the corresponding page, one will see an image of the painting and the key information, such as the title, artist, and a short description. This will be similar to what one would have seen at the museum on a wall label or tag, attached to the wall next to the work of art.

What one would see first are the object details, informally known as “the tombstone”, a term that sounds rather grave (pun intended), but has become standard. It usually includes the artist’s name, origin and dates of life; the date the work was created; the medium of the work (oil, watercolour, pastel, etc.); the dimensions; and details more specific to the museum, such as how and when the painting entered the collection (gift, purchase, bequest, etc.) and its museum-specific identification number – this varies, but usually has something to do with the year it was acquired or entered the collection.

Repin’s portrait of Garshin was painted in 1884, during a particularly prolific period of portraiture in the artist’s career. It was done using oil paint on canvas, the most traditional medium for painting.

Depending on the work of art, one may be able to read a longer written description about it online, which would be called the full entry or catalogue essay, with more context, history and scholarly references.

Sometimes mentioned with the other object details, signatures, inscriptions and markings can reveal interesting information one would not otherwise be able to see: certain works are signed on the back of the canvas or the frame, and museums may provide photographs of it. If one’s eye did not automatically spot the signature, reading about its location can tell the viewer where to find it.

Repin’s signature on the Garshin portrait is quite easy to see, signed on the lower left, in black against the chestnut-colour background of the table. 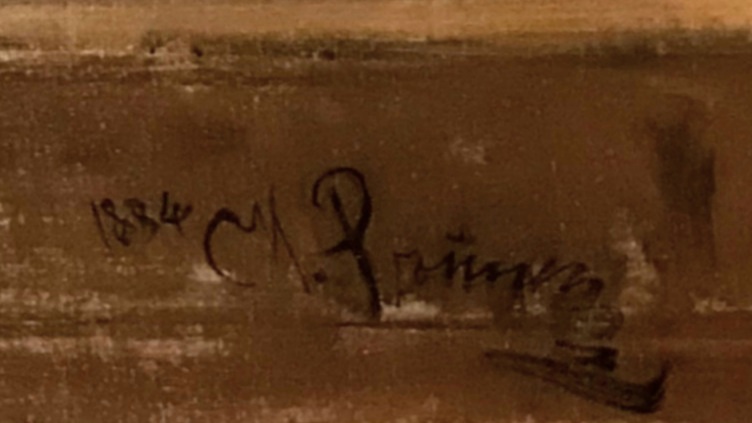 Detail of Repin’s signature. Image courtesy of the author.

The provenance is the history of the object’s ownership, ideally, from the point of its creation to the moment it entered the collection of the museum. The older the painting, the more likely it is to have a long list of prior owners, with potential blanks and questions marks because with time, records are lost, erased and leave room for doubt. While provenance does not change once a work of art enters a museum collection, unless it is deaccessioned, the list of its exhibition history and references can continue to grow.

Repin kept this portrait for three years before selling it to Ivan Tereschenko for 500 Roubles. For context, the monthly wages of an average worker or low-ranked official were around 20 roubles at that time. The expense of such a painting called for great family wealth and the first owner was, in fact, the heir to the Tereschenko dynasty, large landowners and sugar-refining magnates in the Ukraine.

Ivan Nikolaevich Tereschenko (1820-1903) devoted much of his life to philanthropy and art, assembling a great collection, some of which he took with him to the family villa in Cannes, in the South of France. The Tereschenko family is associated with the Khanenko name through the marriage of Varvara Tereschenko, Ivan’s sister, to Bogdan Khanenko. The Khanenko couple were also actively involved in the patronage of the arts; the collection they acquired went on to become the Museum of Western and Oriental Art in Kiev, also known as the Bogdan and Varvara Khanenko Museum of Art.

After the Tereschenko-Khanenko family, the next owner of the Repin portrait was Boris Bakhmeteff (1880-1951), a Russian-born engineer who became a US Ambassador, taught at Columbia University and made a fortune through his industrial inventions. The painting remained in Bakhmeteff’s collection until his death in 1951. During his life, Bakhmeteff also founded and endowed the Humanities Fund to help advance the study of Russian culture in America. In the early 1970s, its trustees dissolved the fund, with most of the archive gifted to Columbia University, and many of works of art – to the Metropolitan Museum in 1972.

Museum exhibitions are rarely put together from the permanent collection of a single museum. Usually, they involve loans from other institutions, collectors and private individuals. Paintings have a passport or a travel log, recording each of the exhibitions in which they took part. The more, the better, usually, showing the demand for the work; however, it can lead to condition issues that in the most serious situation can restrict future outside loans entirely.

Repin’s painting has eight specific entries in its exhibition history. Its first public appearance was at the 15th exhibition of the Peredvizhniki (The Wanderers) in 1887, at which point it was already in the Kiev-based collection of Ivan Tereschenko. Before the portrait left to America, its final public showing was in Paris in 1906, lent by Elizabeth Tereschenko.

Only after the painting entered the Metropolitan collection in 1972, did it start to once again travel. First, it was in a 1978 exhibition at the New York University Grey Art Gallery, which looked at the emergence of Modernism in Europe and America. The portrait returned to Russia once, both to Moscow and Saint Petersburg, for the exhibition in honour of the 150th anniversary of the artist’s birth in 1994-1995. Twenty-five years later, in 2019, during the retrospective on Repin’s 175th birthday anniversary it did not reappear.

Most recently, in 2005-2006, the portrait left the Metropolitan to travel just several streets up 5th Avenue to the Solomon R. Guggenheim Museum for a monumental exhibition RUSSIA! – a survey of Russian art from the 13th century to the current day.

The dossier or collection of important scholarly references about a painting is the holy grail of information and reading that one may need to do in order to fully understand this work of art. Many of these sources may be available online or accessible through the museum website.

The list for Repin’s painting is quite extensive, with over twenty-five references, and a line-by-line review may exhaust anyone, even a determined researcher. The portrait of Garshin is mentioned in personal letters, exhibition catalogue entries, scholarly journal articles, publications by the Metropolitan Museum and other important mentions that give credibility and invaluable information that substantiates the painting’s place in the history of art.

When there are known preparatory drawings, related studies, later copies or other works that are important to understanding the one at hand, a museum webpage may have a “Related Works” category. In the case for Repin’s portrait, these comments are in a “Notes” section, and the two paintings mentioned are both famous in their own right. 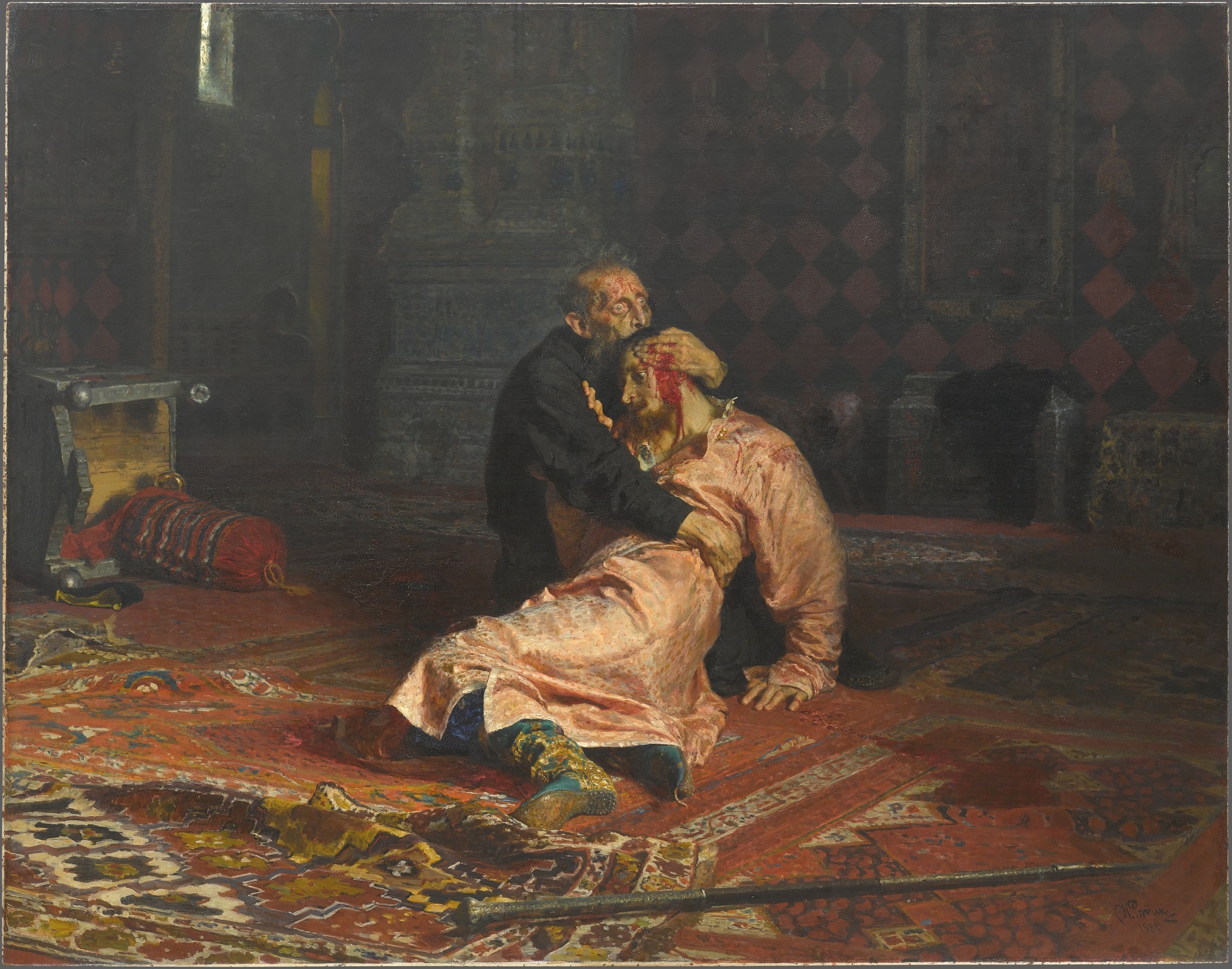 There is an existing direct study of Garshin in profile in the Tretyakov Gallery Collection, which likely influenced Repin in how he painted the face of Czar Ivan’s son in Ivan the Terrible and His Son Ivan on November 16, 1581 (1885).

They Did Not Expect Him (1884-88) can be traced to Garshin through letters from Pavel Tretyakov, in which the collector mentioned that Repin reworked the face of the central figure to look more like the writer at Tretyakov’s request. 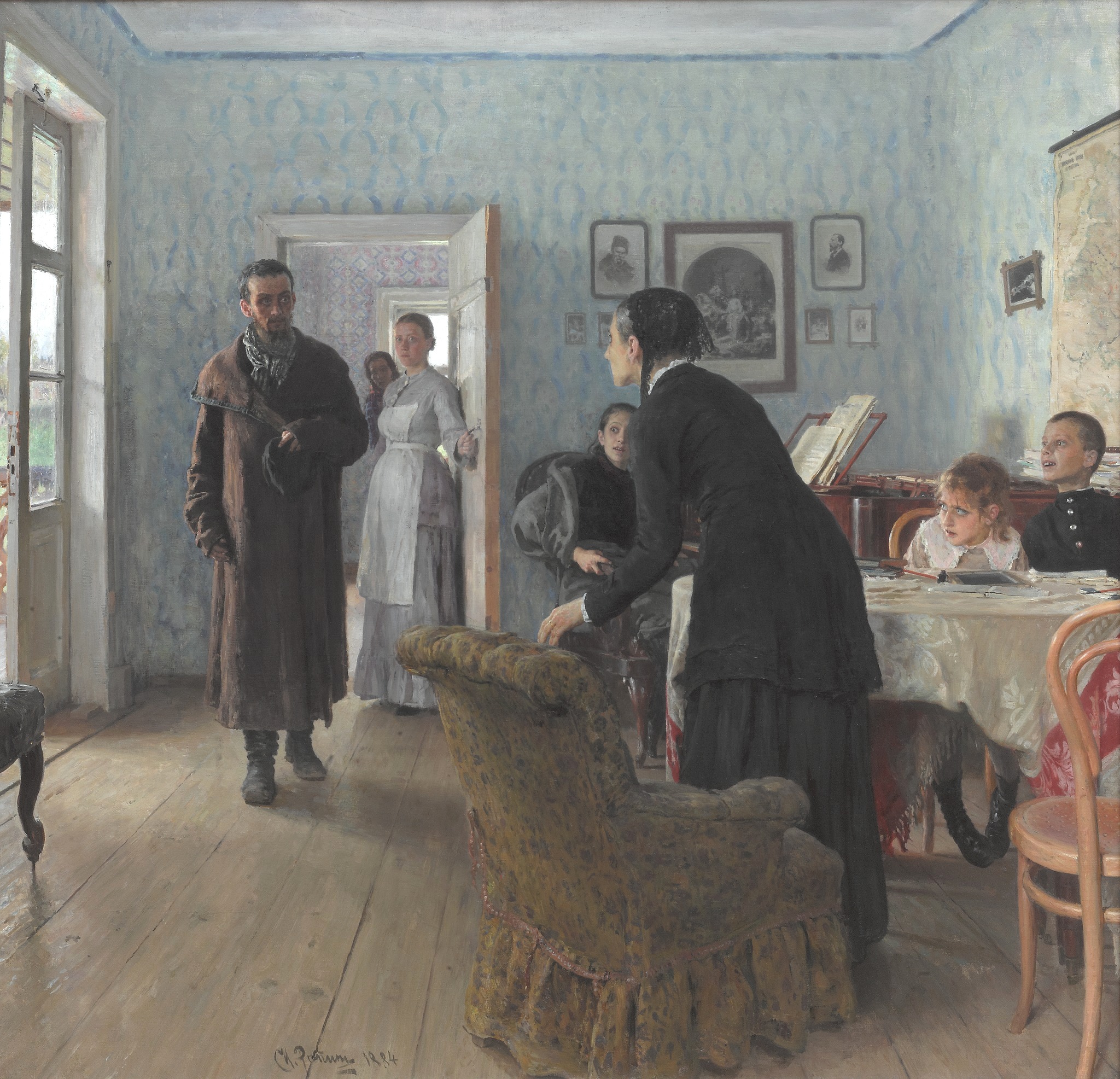 They Did Not Expect Him (1884-88). Image courtesy of The Tretyakov Gallery.

Most museums today have high-resolution images of works of art, which allow the user to look more closely at the details than one would not even notice at the museum. Sometimes, they are available to download for personal use, which means that if a specific work has taken your fancy, it can become the background on your computer. For fans of audio guides or tours, some museums have pre-recorded audio files available for listening online.

Of course, nothing can quite replace standing in front of a work and looking at it in person, but there is plenty to explore and learn about a work of art online. It can be the perfect opportunity to create your own “Must See” list for the museums when they do open.

Other Articles By Olya Voronetskaya

Interview with Natasha Butterwick: Behind the Scenes Look at Running RA+C 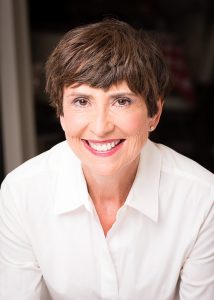 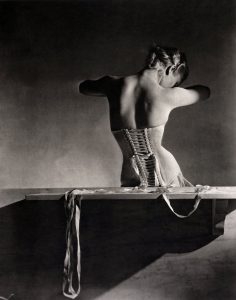 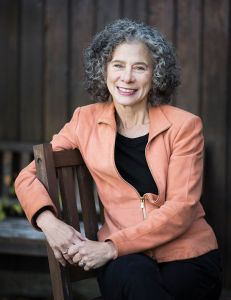