We continue the publication of interview with Svetlana Zvereva. Svetlana Zvereva is co-Musical Director of Russkaya Cappella, a chamber choir based in Glasgow and specialising in Russian Orthodox liturgical music, folk song and art song. Russkaya Cappella produced a season of concerts in June 2017, Music from the Time of the Earthquake, which featured recently recovered and revived  Alexander Kastalsky’s ‘Requiem for Fallen Brothers,’ discussed in another interview Finding Kastalsky, plus songs and music for piano from that era. Ashley Holdsworth asked Svetlana about the challenges inherent in producing a concert commemorating the events of 1917 in a meaningful and balanced manner.

AH: The music Russkaya Cappella performed after Requiem for Fallen Brothers was quite different in tone to Kastalsky’s oratorio as it featured shorter folk songs, workers’ songs and music from the years of peace after 1922. How did you develop that side of the programme?

SZ: That was the programme which I found greatest difficulty in compiling for our choir; especially while deciding on how to represent that astonishing phenomenon in one single concert. It’s a series of events the interpretation whereof still provokes much debate. I understand the Requiem of Kastalsky to be a requiem for the pre-Revolutionary Russia as a whole. The work was first performed in Petrograd in that very year of 1917. Whole century after it was conducted by Sir Henry Wood in Birmingham, which somehow symbolises the whole complex of events and ideas to do with the massive change in which that year was a major landmark. I thought it would be a good idea to represent the immensity of the events of that time by music from that very time, and a little bit before and after.

AH: Yes, it was significant that the choir included music from the years of peace in the 1920s.

SZ: The idea was also to include Medtner’s  Sonata Tragica [performed in June 2017 at Russkaya Cappella’s concert by pianist Ivan Penev which incorporates some of those ideas but without any words and without anything concrete. We practically handed the microphone to the people who spoke at that time, whether they were on the White side or the Red side, or anywhere else, and that was partly behind the choice of music. Moreover the people at that time sang the same melodies with opposed texts and we wanted to include that. The tunes mainly date from before the revolution but were given different texts by opposing sides in combat after the revolution. They were even sung by combatants such as Makhno. Singing, including choral singing, was big in Russia before the revolution and of course it continued 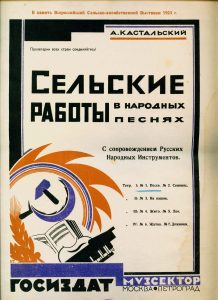 through and beyond the revolution. It was going on in post-Imperial Russia with new texts and a different kind of attitude, but it also went on in the Russian emigration as well. Quite soon after the revolution the idea of liquidating illiteracy took hold in a big way, and choral singing was among the resources deployed to that end, consciously cultivated. Kastalsky, too, contributed to that process Russia-wide and his pupils and former students similarly contributed to that very large-scale educational programme of  bringing literacy to the formerly illiterate mass of the Russian peasantry. We are singing arrangements of music by composers formerly known as composers of church music: e.g. Viktor Kalinnikov, Kastalsky himself, the famous church music composer Gretchaninov. It is the music which was published exactly at the beginning of the 1920s. I am interested in authentic publications of that time; the spirit, the energy of that time is conveyed by these pieces. The programme of the concert is not a great intellectual construction, it is made up of the music that was genuinely heard in many places during those years. I was very struck when we saw the exhibition at the British Library [Russian Revolution: Hope, Tragedy, Myths] by the fact that our programme was very much the equivalent of what was in the exhibition. I have not found any other programme that could convey the idea of the complexity and scale of the events. Many paradigms are interwoven there.

AH: Yet the predominantly British audience demanded that Russkaya Cappella sang that favourite of the Red Army Chorus, Kalinka, afterwards.

AH: Maybe the request reveals how much, or how little, a British audience knows about what happened in Russia 100 years ago, and why it matters now. From a personal perspective, it was enlightening to sing music that represented more voices from this time, and to realise that there were years of peace at the end of the civil war, culminating in a period of intense artistic development during the 1920s. It wasn’t a series of events that simply stopped because one has closed the history book.

SZ: Not all archives are researched. We think we should go on doing what we are doing, not singing Kalinka. We’re doing something genuine. Proper art is not necessarily always understood at once.

AH: How do you gauge the reaction to Russkaya Cappella’s repertoire of the Russian singers that are in the choir and those that aren’t Russian? There was considerable difference of opinion about which pieces were most popular when the choir was in rehearsal for the concert.

SZ: The Russians respond most to what they have known since childhood. Thinking of Troyka, Kastalsky’s music makes heavy demands on the previous musical experience of our Russian singers and they needed to develop and come up to a stage where they got more out of it. Folk songs promote an emotional response in Russians whereas for the Brits Russian folk songs are difficult. There is a kind of pagan energy about some of the folk songs that eventually reaches the British singers, as well. The same type is to be found in Stravinsky’s Les Noces (The Wedding) or something similar. But religious music somehow touches everyone, whether it is Kastalsky’s Requiem, funeral music or spiritual chanting. Everything needs time, and one has to live with something, to immerse oneself into it, in order to become accustomed to it and get much more out of it, irrespective of whether one is Russian or British.

Other Articles By Ashley Holdsworth