History, heritage, and fate combine in this recording from Gianandrea Noseda and the London Symphony Orchestra, bringing together the music of Tchaikovsky and Rimsky-Korsakov.

Tchaikovsky’s Fifth Symphony, brimming over with drama and emotional intensity, charts a course from darkness to a final, life-affirming glimmer of optimism. Composed in 1888 and conducted by Tchaikovsky for its November premiere that year, the symphony makes use of a recurring main ‘Fate theme’ to bring together the work’s four movements. 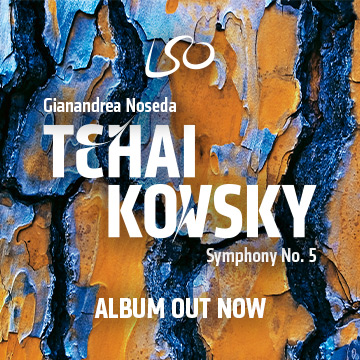 Rimsky-Korsakov dug deep into Russian legends and folk tales for his opera The Legend of the Invisible City of Kitezh. Follow the mythical, magical story of the ‘Russian Atlantis’ in this orchestral suite, told through the composer’s glittering orchestral palette.

Known for his mastery of Russian repertoire, Noseda’s previous Tchaikovsky recording with the LSO was paired with Mussorgsky’s Pictures at an Exhibition, and received glowing reviews:

“No shortage of versions of either work, of course, but this is a shortlist release, for Pictures especially, very well recorded and neatly tidied to studio standard.”– Classical Source

“Conductor Gianandrea Noseda and the London Symphony Orchestra players not only fully capture and project the implacable feelings of anger that set off the opening movement, but also the dichotomy of moods, from sad to heroic, that drive this dramatic motif to its impassioned conclusion.” – Classical Music Sentinel

“Bold, a performance of hot blood and obsessive thoughts.” – The Times