A rare, early work by the celebrated conceptual artist, Ilya Kabakov, will highlight Sotheby’s mid-season online Russian art sale which opened for bidding on 24 September and is about to finish on 1 October.

Dated to 1964, Conditional Reflex is considered to be only the second conceptualist work created by Kabakov, and the earliest painting by the artist to ever come to auction. Presented with an estimate of £350,000 – 500,000, the work has changed hands only once since it was acquired directly from the artist by the journalist, Henry Shapiro, in Moscow in 1973. 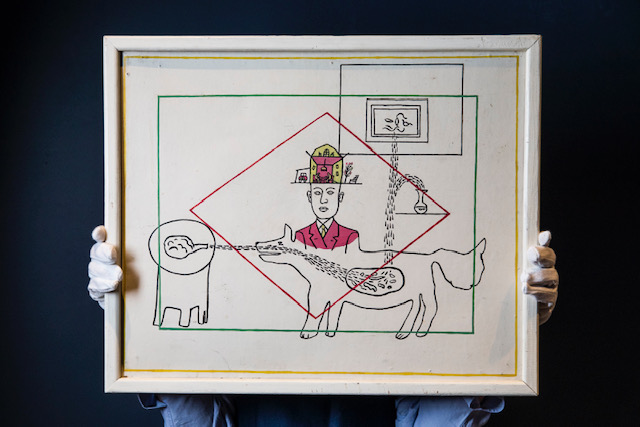 Noted by the artist in a description of the work, the title and subject of the painting take inspiration from the scientific discoveries of the great Russian physiologist, Ivan Pavlov, and his theory of classical conditioning. Linking the idea of conditioned responses to the political and social realities of Soviet life in the 1960s, the painting, like others by Kabakov’s contemporaries, was created in direct response to Soviet socialism of the time.

Reto Barmettler, Sotheby’s Specialist of Russian Paintings, and Head of the Department said, “Conditional Reflex is a hugely important early work in the oeuvre of Kabakov, who would go on to become one of the world’s leading conceptual artists. While it was created in the specific context of the Soviet Union and

Khrushev’s Thaw, its central idea of how humans are influenced and controlled by political and economic powers is universal and remain as relevant today as they were back then”.

In his appreciation of the work, curator and art historian, Norman Rosenthal notes that ‘[n]ow, looking back at a complex sixty-year history of painting, drawing and installation art, the small seeds of all that Ilya Kabakov was to imagine and execute in his art – later to be joined by his wife Emilia – and Moscow conceptualism in general are weirdly contained in this very early work of the artist’.

Conditional Reflex is offered as the top lot of Sotheby’s sale, Escape Artists – The Non-Conformists Online which opened for bidding from 24 September through 1 October 2020. Dedicated to unofficial Russian art from the post-war era – the so-called Soviet non-conformists, or second avant-garde, the sale presents works by artists who sought to escape the ideological confines of Soviet artistic culture.

The third auction of its kind, this sale which features works by influential artists, such as Oleg Vassiliev, Ivan Chuikov, Erik Bulatov, Oskar Rabin and Vladimir Weisberg, follows in the wake of two hugely successful sales of the same name, both of which saw results in excess of pre-sale estimates and sell-through rates of over 85%.

The strength of the Russian art market was also demonstrated earlier this year when Ivan Aivazovsky’s monumental painting The Bay of Naples soared to £2.3 million / $2.8 million, more than doubling its pre-sale estimate (£800,000 – £1.2 million) to become the highest value painting ever sold in an online sale.