Over a frenzied 56-hour period from June 4-6 Christie’s, Sotheby’s, MacDougall’s and Bonhams will be holding their usual spate of Russian sales – and hoping to pursue the market-upturn discernible last November. One difference this time out: MacDougall’s viewing and auction will take place at The Mall Galleries near Admiralty Arch, as their King Charles II Street premises are being redeveloped. Meanwhile Bruun Rasmussen will again be adding a continental take by staging their own Russian Sale in Copenhagen on June 8. 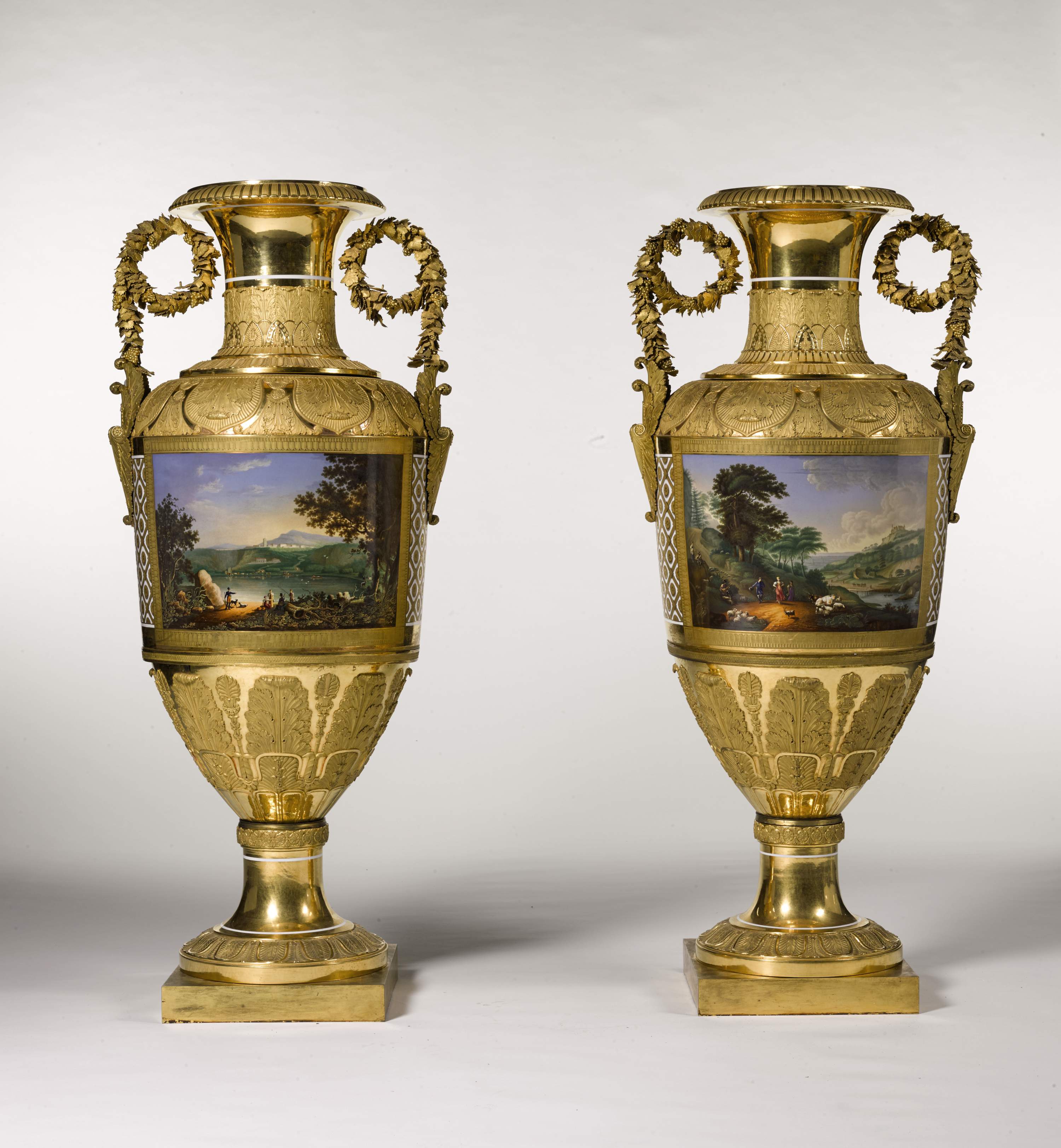 Top price during Russian Week could be generated by a pair of ormolu-mounted, flared Imperial Porcelain vases moulded with raised, neo-classical leafy friezes and painted with landscape views by Kornilov & Stoletov. They were made in St Petersburg in 1825 and will be offered at Sotheby’s for a substantial seven-figure sum (est. £1-1.5m). 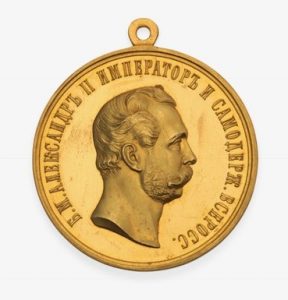 Along with a glitter of icons de-acquisitioned from New York’s Metropolitan Museum of Art, Sotheby’s also showcase a silver-gilt and enamel triptych icon by Savelev Bros from Kostroma. This was sent to Nicholas II and Alexandra by the City of Kostroma as a wedding gift in 1894. The central icon replicates the Feodorovskaya Mother of God in Kostroma – patron icon of the Romanov Family (est. £80,000-120,000).

Christie’s have a Gold Medal (c.1855) for Service In The Tsar’s Personal Escort (est. £100,000-150,000), plus an Imperial porcelain platter (1906) with Soviet propaganda decoration applied in 1923 (est. £12,000-18,000). Bonhams offer a large silver-gilt kovsh by Yakov Maslennikov in Moscow, presented in February 1763 to Cossack commander Starshin Dyak Ivan Artemev by Catherine II, whose profile appears on the side (est. £40,000-60,000). Maslennikov established his workshop in 1758 and worked for Empress Elizabeth before Catherine the Great; his craftsmanship can be admired in the Kremlin and the Hermitage. 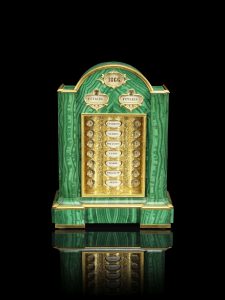 Bruun Rasmussen continue their interest in icons with an 18th century example depicting the prophet Elijah in his chariot of fire (est. £25,000). They also have their own presentation kovsh, in the form of a St Petersburg parcel-gilt silver kovsh gifted by Tsaritsa Anna to Ataman Ekim Petrov of the Astrakhan Voisko on 9 April 1737 (est. £45,000-60,000). Ivan Kovshenkov’s 16-inch patinated bronze Cossack from Sevastopol (1856), commemorating Crimean War heroics, comes with a charming provenance, ‘acquired by the present Danish owner from another Dane, who bought the sculpture in an antique shop in Murcia, Spain’ (est. £20,000-25,000).

Bruun Rasmussen propose several items once owned by Nicholas I’s grand-daughter Grand Duchess Anastasia Mikhailovna (1860-1922), a colourful blueblood who grew up in the Caucasus and survived a lifeless marriage to a German toff to bear a child by her Personal Secretary, then ramp up the fun on the Riviera before her demise in Lausanne. 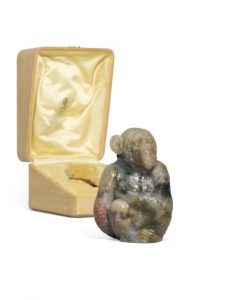 Nastya’s trinkets include two Easter egg pendants (c.1900) – in agate and rhodonite – and a wooden ‘shrine’ decorated with Russian folk scenes, destined to house Osman cigarettes (Petrograd 1914-17). Each item is expected to bring around £1250. So is a Fabergé tie-pin (workmaster Andrei Goryanov) decorated with a stylized poppy and set with faceted rubies and rose-cut diamonds (St Petersburg 1896-1903).

A Fabergé Easter egg by Henrik Wigström, decorated with salmon pink translucent enamel on a guilloché ground and set with four rose-cut diamonds, could fetch £10,000.

Pricier Fabergé is to be found at Christie’s and Sotheby’s, who have a jewelled gold and enamel box from 1897 (workmaster Michael Perchin) whose lid is adorned with the diamond-studded cypher of Nicholas II on a ground of translucent red enamel over sunburst engine-turning within an openwork panel chased with two sword-wielding griffins rampant (est. £150,000-200,000). 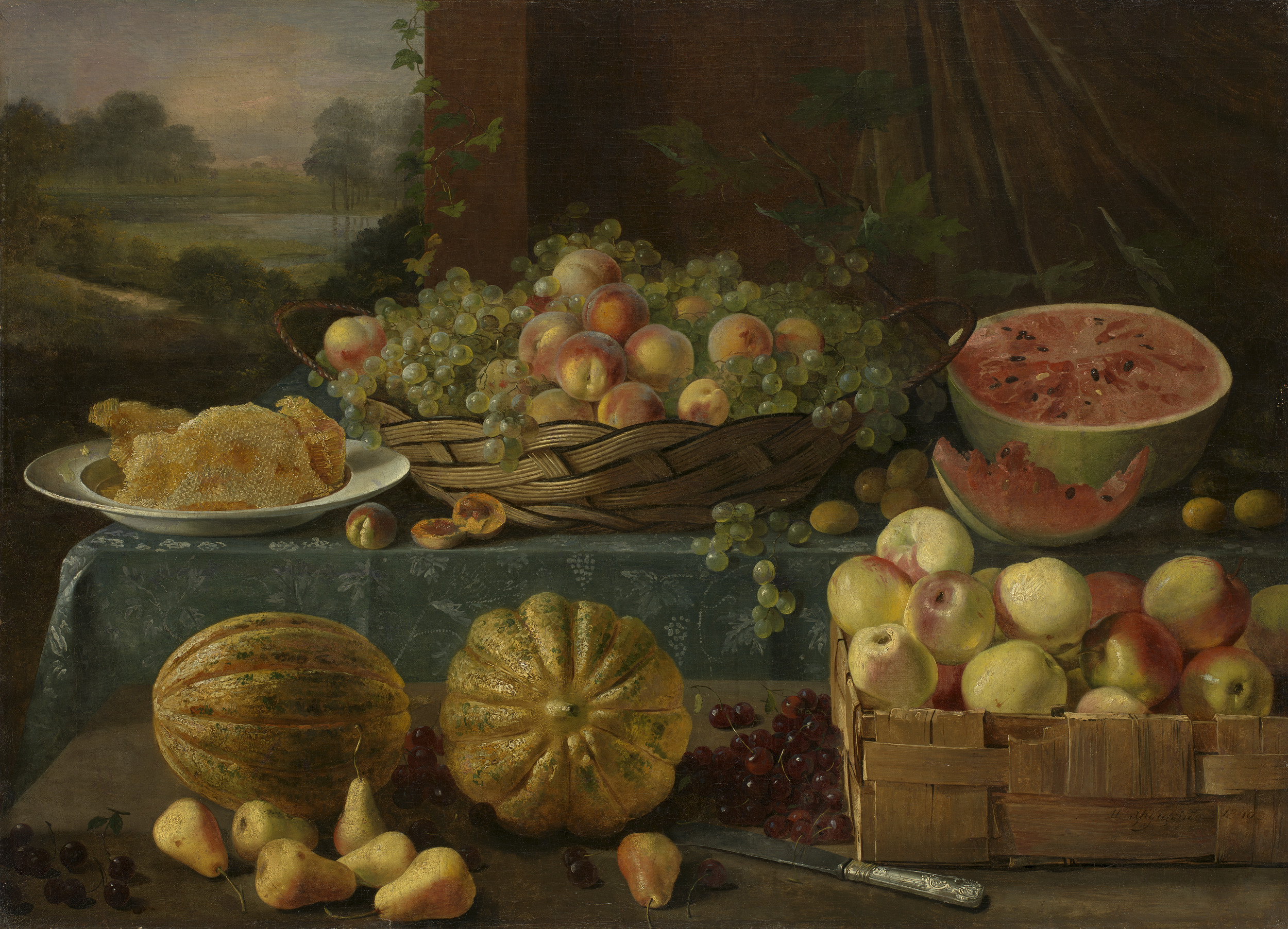 Sotheby’s have a minor Aivasovsky: his 1851 Chapel by the Coast on a Moonlit Night (est. £180,000-250,000), owned by the same family since the First World War, having been acquired by the North Norwegian entrepreneur Jacob 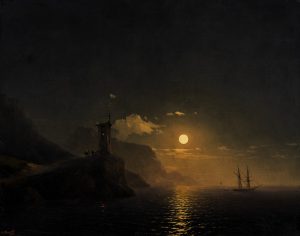 Andreas Whist. He moved to Russia in 1901, aged 16, to join his brothers’ trading post in the Kola Peninsula. He later settled in St Petersburg, but fled Russia after being briefly arrested by the Bolsheviks – sending his art collection to safety via Murmansk, where his brother Ole had it shipped on to Oslo. 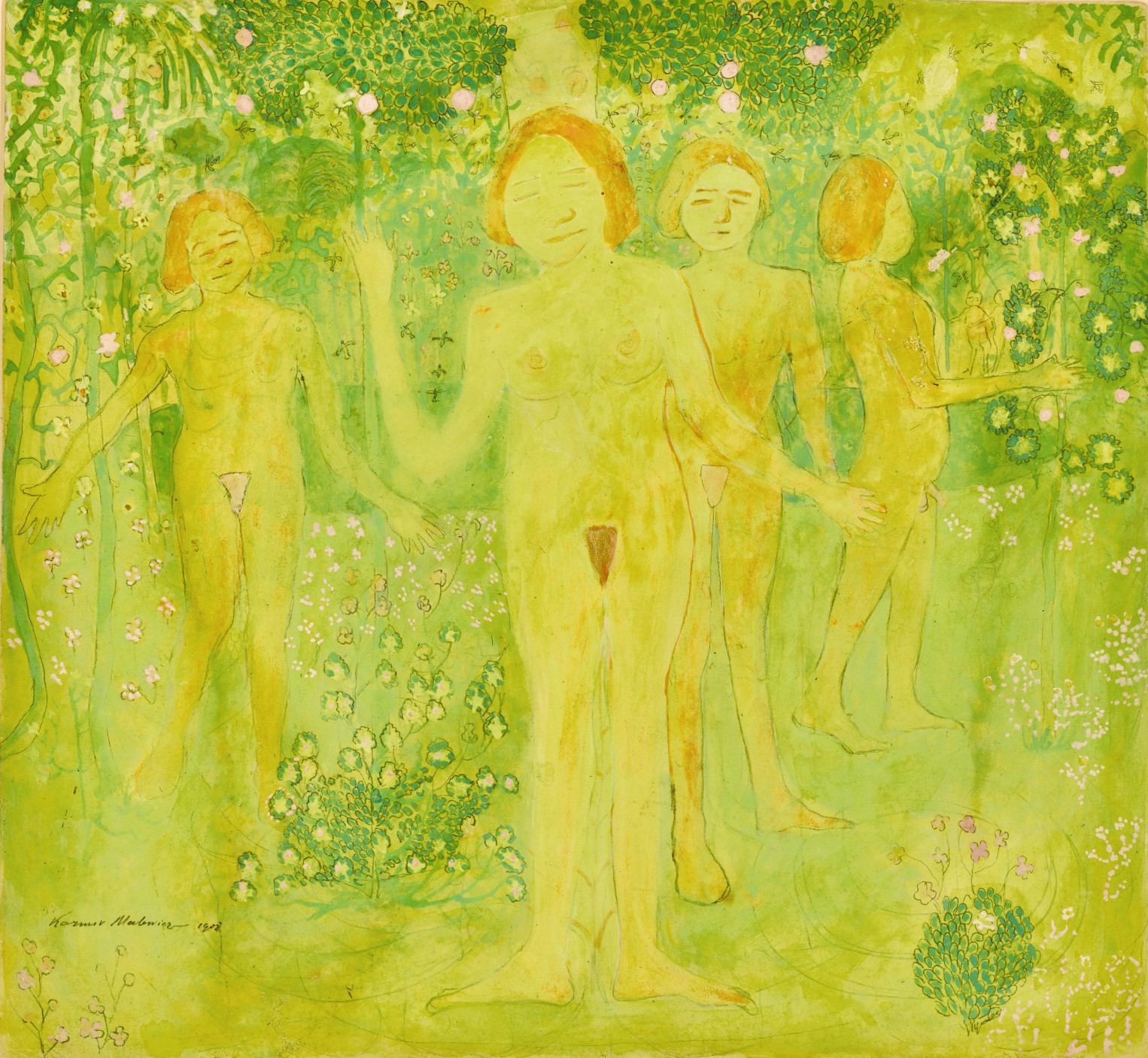 An early Figurative Malevich, The Secret of Temptation (1908) from his religious-oriented Yellow Series, stars at Sotheby’s. Its mystical landscape features naked young girls whose ‘carnal characteristics’ (report Sotheby’s racily) offer ‘a direct infringement’ of artistic propriety. A staider portrait of Malevich’s mate Kliun graces the back. The estimate reads £250,000-350,000. 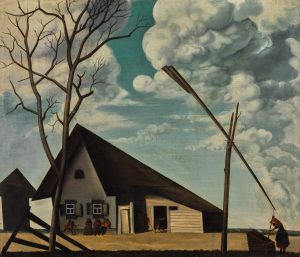 So it does for Pavel Tchelitchew’s Excelsior, painted at West Dean in Sussex – the home of Surrealism collector Edward James – in Summer 1934. This triplicate portrait (with a fourth, obscured figure) evokes a game of blind-man’s buff, complete with butterfly blindfold. The first and probably second figure are modelled on the artist’s new lover, Charles Henri Ford; the third is thought to represent Parker Tyler, the American author of the then-scandalous gay chronicle The Young And Evil.

Vasily Shukhayev’s Russian Landscape, completed in Paris after he arrived in 1921 from a year in Finland awaiting a visa, comes with a similar estimate. Shukhayev’s friend Yakovlev is represented by a 1922 Harlequin (est. £150,000-200,000) that evokes the Pierrot & Harlequin double self-portrait the pair daubed in 1914 Petersburg while students at the Mikhailovsky Academy.

Vladimir Stozharov’s 1964 depiction of Bolshaya Pyssa, a village on the banks of the River Mesen east of Arkhangelsk, is predicted to bring £150,000-200,000. So is a 1925 Konchalovsky view of SS Boris & Gleb Novgorod, originally owned by Vasily Tikhomirov, head of the Bolshoi from 1924-37. Vera Yermolayeva’s 1920 Suprematist Façade Design (est. £30,000-50,000) is claimed by Sotheby’s as her most important surviving Suprematist work. Vera adopted Suprematism after Malevich’s arrival in Vitebsk in November 1919, a few months after her own: she was dispatched to the eastern Belarus outpost by the People’s Commissariat of Education in April 1919 to assist Chagall at his People’s School of Art. The design was part of her programme for May Day street decorations in the town; the façade is thought to be that of Vitebsk Theatre (destroyed in World War II). 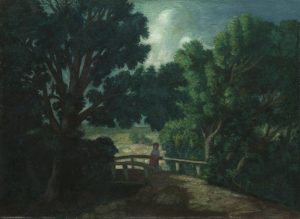 Vasily Yermilov’s 1934 Design for a Recreation Room in the Kharkov Palace of Pioneers & Octobrists has a vibrant colour scheme chosen, speculate Sotheby’s, to appeal to children. From the collection of the former Sotheby’s owner, Alfred Taubman it carries an estimate of £40,000-60,000. One of Sotheby’s contemporary highlights promises to be a Weisberg Still Life with Eleven Test Tubes (1975), included in his solo show at the Galerie Gorky Basmadjian in Paris in 1984 (est. £40,000-60,000). 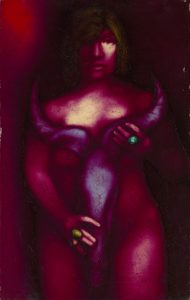 Bonhams highlight should be Leon Gaspard’s large Siberian Sleighriders (1921) from the Arizona estate of swashbuckling Midwest middleman Russ A. Lyon Jr., shown at New York’s Berry-Hill Galleries in 1986 (est. £250,000-450,000). Both a Serebriakova Self-Portrait with Brushes (Paris 1945) in watercolour, gouache and oil on paper, and an atypical Fechin Still Life with Daisies thought to date from his time in, New Mexico, come with estimates of £100,000-150,000. 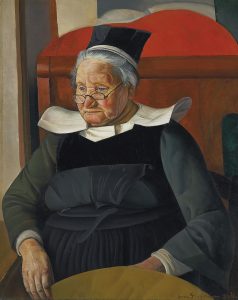 The main Russian picture at Bruun Rasmussen is Feodor Sychkov’s Russian Village in Winter (1934), starring cheerful girls in colourful shawls. This turned up at auction in Rødovre (a suburb of Copenhagen) in 1975, when it sold for DKK 2,700. The estimate today reads £35,000-50,000… equivalent to a hundredfold increase.

Art, even Russian, knows no boundaries and a small 1904 Russian Woman in a Colourful Headscarf by Arkiphov (est. €7,000-10,000) has done the rounds. It was first owned by Danish businessman Johan Poul Quaade (1888-1958), branch manager of the Siberian Company in Minusinsk from 1911-16 then company director in St Petersburg. Quaade quit Revolutionary Russia for Istanbul in 1919, settled in Riga in 1925 and only made it back to Denmark in 1938. 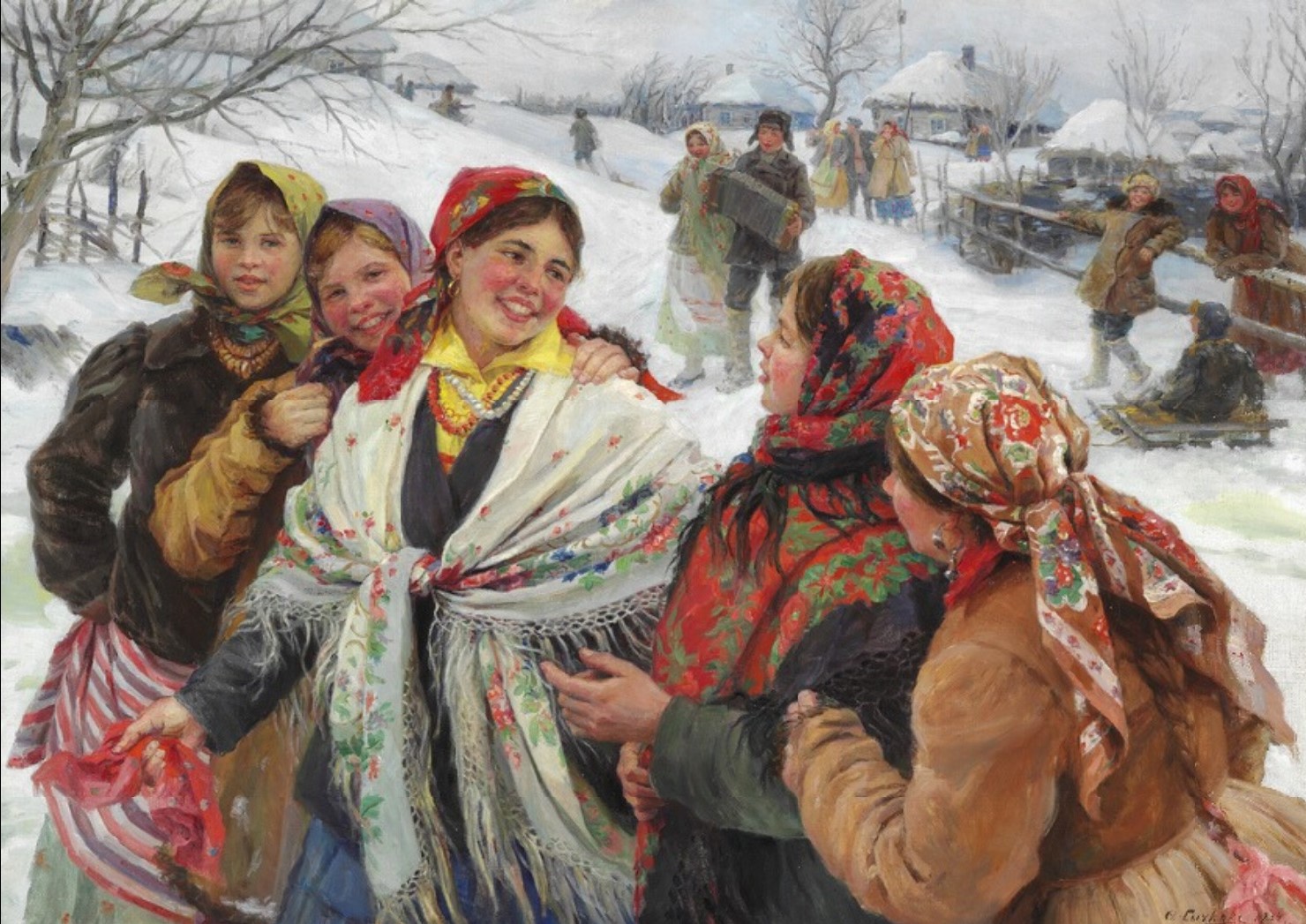