Pussy Riot is once again in the news.  In July, three women dressed in police uniforms staged a pitch invasion of a World Cup match to protest human rights violations in Russia. This month, Maria Alyokhina made headlines by defying the travel ban placed on her to fly to Scotland for her performance at the Edinburgh Fringe Festival.  Few can forget the video showing three women in balaclavas rocking out in front of the altar of Moscow’s Cathedral of Christ the Saviour.  The show trial and unjust imprisonment of Nadia Tolokonnikova and Alyokhina rightly garnered international media attention. But, six years on, I suggest, risk becoming a mere shadow of their former selves. 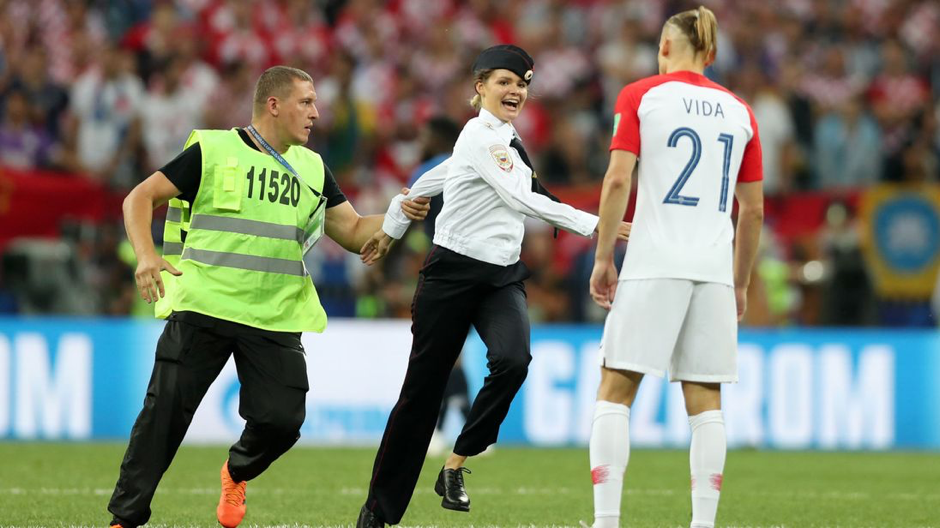 A Pussy Riot activist running onto the pitch during the World Cup final in Moscow. 15 July 2018

The Pussy Riot ‘Brand’ and the Banality of Protest

Pussy Riot have become an easily accessible but lazy shorthand for resistance against authoritarianism.  They offer a pleasing aesthetic: bright colours, balaclavas, and 80’s style punk clothing.  Want to be like Pussy Riot?  Find yourself some neon clothing.  Their image is reproduceable – anyone can share in their rebellious glamour.  This was not lost upon the high-end fashion designer, Marcel Gerlan, who, in 2014, sent her wedding dress models down the catwalk in Pussy Riot inspired balaclavas.  The show’s theme was ‘Gerl Power’, transforming the group’s signature look from a contextually specific protest act into a universal symbol of female empowerment. While anything that promotes the latter is to be lauded, the appropriation of protest symbols for commercial purposes is deeply problematic. 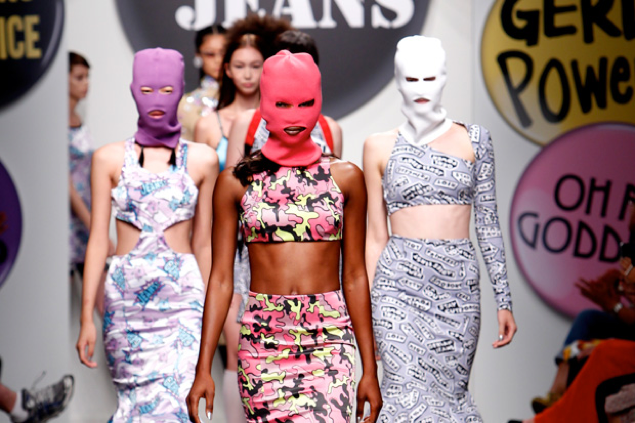 Alyokhina and Tolokonnikvoa themselves did something of a fashion shoot in a 2014 interview for Vanity Fair, sporting a decidedly softer and more feminine version of their protest gear.  The Cathedral protest was a clear rejection of Russia’s conservative attitudes towards gender.  By covering their faces, they rejected the objectification of women’s bodies, and also rebelled against the Orthodox Christian ideal of docile, quiet women. Arguably, the sanitised aesthetic in the famous fashion magazine trivialises the original bold rejection of traditional femininity. 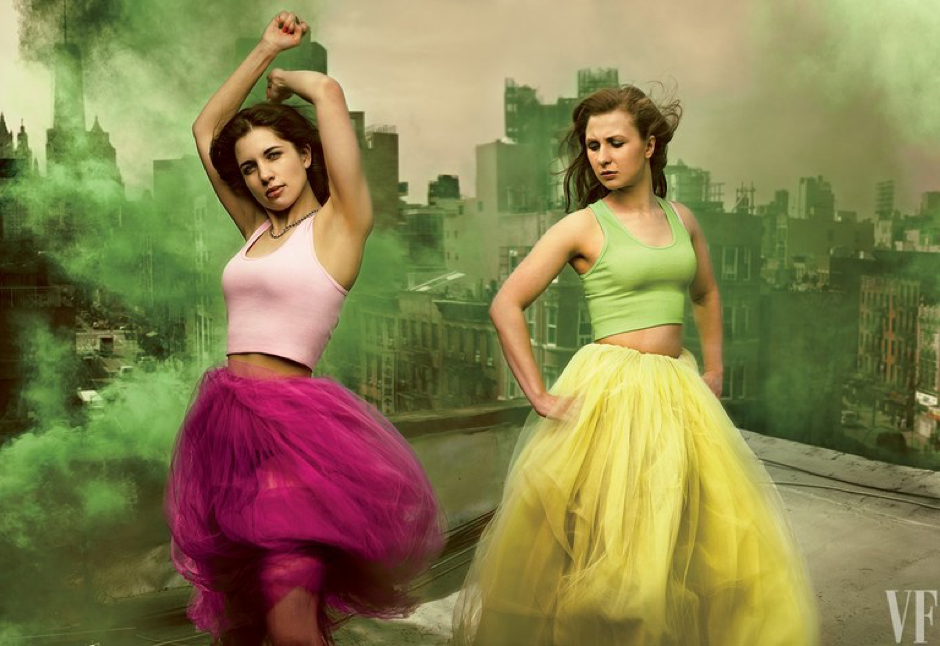 If they were a company, we would say that they have created the perfect brand.  Indeed, in 2017 they launched their own clothing brand called ‘It’s Gonna Get Worse’ featuring their signature balaclavas and technicolour T-shirts.  In 2015, Tolokonnikova and Alyokhina appeared in the hit series House of Cards as thinly disguised versions of themselves alongside an equally thinly disguised Putin replica.  In 2016, Alyokhina performed her experience of life in prison in the theatre production ‘Burning Doors’ with the Belarus Free Theatre.  Walter Benjamin, in his iconic 1935 essay, The Work of Art in the Age of Mechanical Reproduction, argued that mass production of an art object reduces the ‘aura’ of the original. The relevance of this theory to Pussy Riot is clear: The more that its members ‘reproduce’ themselves – whether through merchandise, gigs, or TV series – the less meaningful the group becomes. 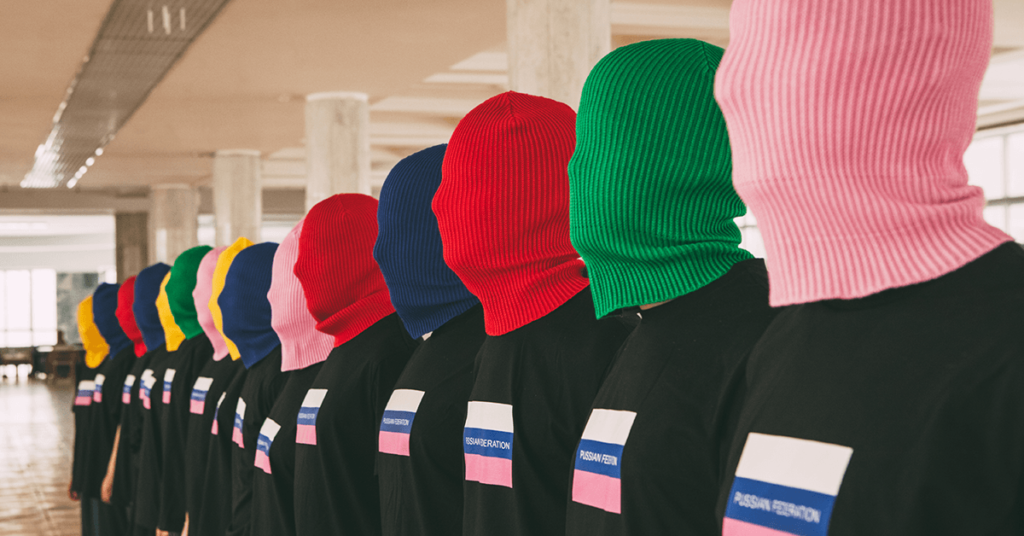 The Problem of Post-Modernism

In his theory of semiotics, the 20thcentury linguist Ferdinand de Saussure defined a ‘sign’ as that which communicates a meaning that is not inherent in the sign itself.  A word does not have an inherent meaning, but instead one assigned to it by social consensus.  Post-Modernism takes this theory yet further, arguing that signs have no ‘real world’ anchor and, instead, create their own reality.  To most Western analysts, Pussy Riot are a ‘sign’ in the Saussurian sense: They represent not only their own act of protest, but also every opposition-minded individual in Russia.  In reality, however, they have become a Post-modern sign, referring to nothing but themselves.  Yes, some Russians may agree with the sentiment of their performances, but they do not represent any tangible social constituency.  The harsh reality is that they are simply too brash, too offensive, for most Russians to stomach.  Our failure to fully grasp this is creating a widening perception chasm between the West and the Russian public beyond the creative classes of Moscow and St. Petersburg.

Hope for the Future

None of this is to say that Pussy Riot do not deserve our respect.  Anyone brave enough to challenge the existing system is worthy of admiration.  Their punk prayer in the Cathedral of Christ the Saviour raised the important concerns of the corruption in the Russian Orthodox Church and political class.   Rather, I am questioning the reasons for – and impact of – our deification of them. What signal are we sending to less telegenic, less well-connected organisations that do equally, if not more, valuable work in holding the authorities to account? Nelson Mandela had to serve 27 years in prison to become a protest icon.  Pussy Riot had only to wear colourful balaclavas while singing a few anti-Putin lines in a cathedral. 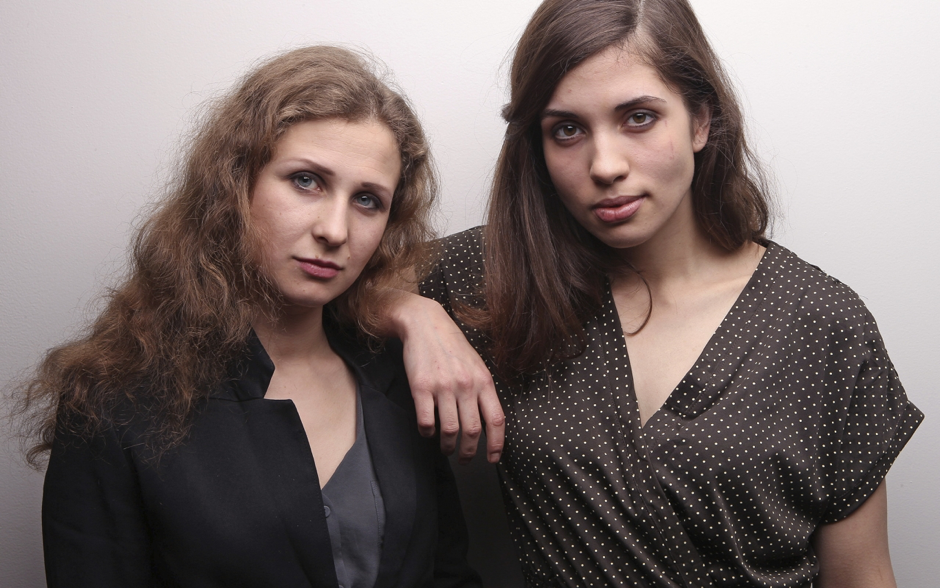 But this is changing.  Alyokhina and Tolokonnikova have reunited to create the independent news platform MediaZona which focuses on abuses in Russia’s penal system and offers an alternative source of information from State-run channels. While Russian is the site’s main language, they have collaborated with major international news outlets such as The Guardian to publish hard-hitting English language articles on human rights abuses in Russia, and war-torn East Ukraine.  As Russia’s youth turn their backs on traditional information channels, this recent initiative has enormous political potential.  Due to political pressures, the platform cannot rely on crowd funding (contributors would be in danger), but instead relies on donations and fees for talks given by the two women.  Perhaps it is not such a bad thing, then, that they curry such favour with the press.

It should be noted that, while I have mentioned only Alyokhina and Tolokonnikova by name, that Pussy Riot comprises many more activists equally deserving of respect whose names are either less well-known, or not known at all.  Whether or not the group transforms into a broader social movement, the sheer importance of brave young women challenging Russia’s entrenched sexism cannot be understated.

So, maybe one day Pussy Riot will deserve our veneration – but not yet.

Korney Chukovsky, the writer & translator. Then and Now

Instagram
📚 If you haven’t seen our new books yet, clic