Postcards from the Edge: Russia on the Eve of Revolution

The recent publication Greetings from the Barricades: Revolutionary Postcards in Imperial Russia by Tobie Mathew is the first major study of the postcards produced in revolutionary Russia. RA+C contributor Peter Lowe reviews this fascinating book. 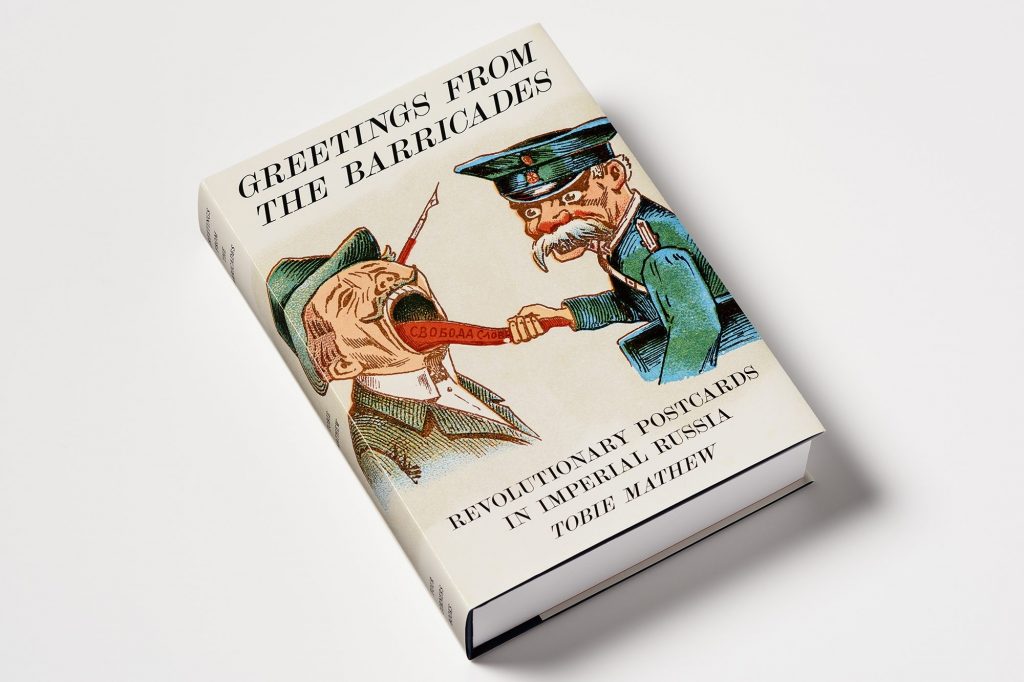 The postcard, by design, is a medium devoted to brevity and clarity.  With limited room for a textual message, it requires the writer to be concise and the recipient to understand it readily. The image on the other side to the text may be purely decorative, like a reminder of a place visited, and if the image is itself imbued with a message it needs to be easily understood.  If the message or subtext are intended to be subversive then the stakes are even higher, and it is in this latter group that we find the contents of a fascinating new volume.

Greetings from the Barricades: Revolutionary Postcards in Imperial Russia takes as its theme the popularity of the postcard format in the late-nineteenth and early-twentieth century.  Chronologically, its content ends with the abdication of the Tsar in early 1917 and the apparent fulfilment of many of the reformist hopes that inspired the cards seen in its pages.  These were not, in the main, views of places or people intended to be sent simply through the Russian postal system.  They were, rather, inexpensive ways of circulating photographs, cartoons, or other images via underground and, occasionally, commercial channels, facilitating the exchange of ideas in a country where the print media was often heavily censored.

If the volume has a focal point in Russian history it is surely the crises of 1905 and their aftermath.  Many of these cards take as their content the events of ‘Bloody Sunday’, the violent suppression of public protests, and the resultant outrage that produced calls for reform so loud that even Nicholas II had to grudgingly accede to some of them.  Postcard-sized images of the carnage of 9thJanuary 1905 (under the old calendar) spoke more eloquently than words ever could and were common currency amongst liberals and revolutionaries whose patience with the Tsar’s authority was wearing thin. In this climate, it was significant that the first ‘cartoon’ postcards had appeared in February 1904, creating an opportunity – either within the censor’s limits or outside of them – for images to be circulated through the Russian postal system or to be purchased from shops by collectors looking to build up albums of prints like a personal archive.

The images on these cards vary remarkably.  Some are photographs of fallen revolutionaries, or protesters recovering in hospital from injuries meted out by the authorities.  Others depict, in graphic form, the bodies left behind after a march has been violently suppressed. 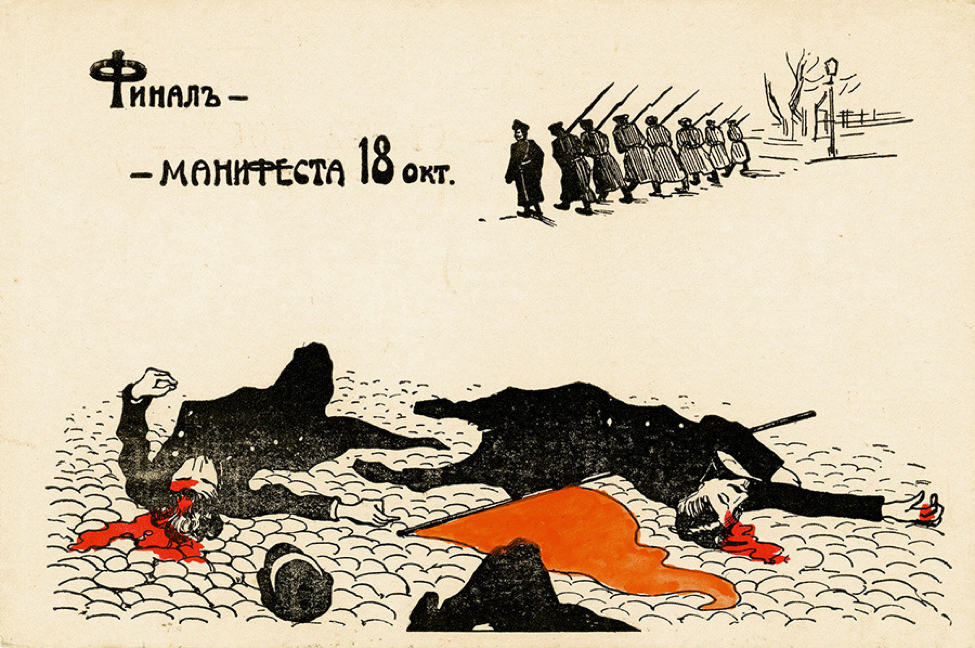 Anonymous, ‘The Conclusion of the 18th October Demonstration’ (1905)

In ‘Two Perspectives’, a line drawing by Mikhail Chemodanov from October 1906 Tsar Nicholas II, shown in his imperial robes with the crown on his head, is seen dancing on top of a mound of skulls while rows of gallows fill the middle distance behind him.  Alongside this gruesome image the same mound is shown with Nicholas himself hanging from gallows set up in the very spot where he was once balancing.  “It will all come to a bad end” the caption reads. We can imagine the risks run by those printing and distributing a card like this, and also the blend of autocracy and anxiety in a state that could order executions, imprisonment, and exile but could never wholly prevent the circulation of a postcard.  In another, produced by the Socialist Revolutionary Party in 1905 Nicholas is seen sitting in a tree (labelled ‘Russia’) and sawing off the branch on which he sits.

Tobie Mathew, who has been accumulating these images since the 1990s, has collated a host of postcards in this volume and given the reader a glimpse of their remarkable diversity and inventiveness.  In a series of usefully inter-connected chapters he outlines the production history of the cards, the political parties invested in their manufacture and circulation, and the themes and content that appear frequently on them. The reader can appreciate the means by which these subversive images evaded censorship and made their way across pre-Revolutionary Russia.  Police raids on the homes and offices of those involved in the printing and dissemination of these cards were commonplace, but however hard the Tsarist state tried to clamp down on these small shows of dissent it never managed to suppress them completely.  Thousands of these postcards were seized by the authorities, but thousands more were seen and sent amongst the regime’s opponents. 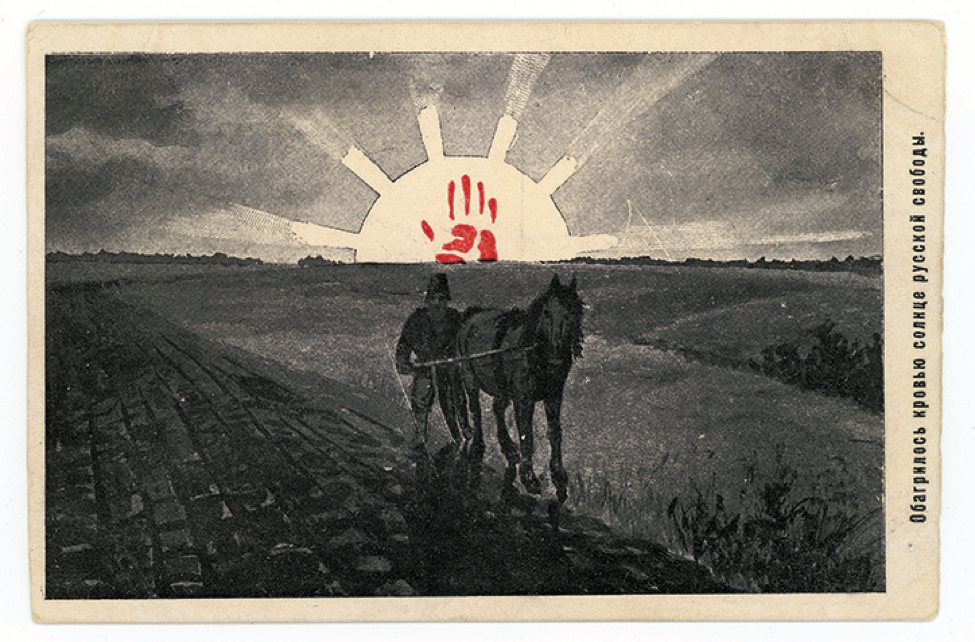 Nikolai Merder, ‘The Sun of Russian Freedom has been Smeared with Blood’ (1905)

These are, in every sense, postcards from another time and place.  They reflect a moment in Russia’s history where the old regime was unstable but still dangerous for those advocating change, and they anticipate the tumult of 1917 when those institutions that had been shaken in 1905 would be toppled completely.  The background to these images is the world of Dostoyevsky’s The Devilsor the plays of Maxim Gorky: a world in which the Tsarist order can barely contain the forces at work beneath its surface.  One of the most striking images in the book was first published by Nikolai Merder in Saint Petersburg at the end of 1905, entitled ‘The Sun of Russian Freedom has been Smeared with Blood’.  In a monochrome landscape, a farmer is seen ploughing his field like a character in a Tolstoy novel – or, indeed, like Tolstoy himself in the painting by Ilya Repin now in the collection of the Tretyakov Gallery. A huge sun throws its beams over the landscape as it begins to sink below the horizon and, in the only use of colour in the image, a blood red handprint is positioned in the heart of the sun.  The image is at once pastoral and political, hinting at forces unleashed and not wholly addressed in the midst of the ‘eternal Russia’ it depicts.  The blood is a reminder of lives lost, and of violence to come.  With Russia’s disastrous entry into World War One it would become impossible for the authorities to stifle the dissent that many of these cards had helped to articulate, with consequences beyond what even the most daring radical of the late-19thcentury could have thought possible.