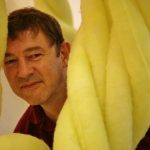 AS RA+C FOUNDER THEODORA CLARKE (aka Theo) campaigned tirelessly in Bristol East in T-shirt and jeans, the art world focused on Mayfair and the ability of the Russian auction market to pursue its tentative turnaround of last November.

Electoral periods are seldom good news for the art market, which thrives on political and economic stability. So sudden was Theresa May’s U-turn decision to go to the polls that the contents of this June’s Russian sales were not affected: the catalogues were pretty much finalized when she launched her snap Election. Yet consignors remain the problem: the catalogues were almost totally bereft of big-ticket numbers. Owners of major masterpieces still do not see the market as strong enough to offer them for auction.

It is clear that consignors are no longer calling the shots as regards reserves and estimates as they were two or three years ago. The number of mid-range lots which doubled or tripled low-estimate was the highest I can remember. Consignors are currently selling more from necessity than desire, and cannot afford to be greedy. It remains an interesting time to buy, and there is still plenty of money around for anything that looks like good value.

Early signs were mixed. Christie’s sale was up on last November, with a healthy selling rate of 79%, but the two star lots failed to sell and the top price was just £377,000. 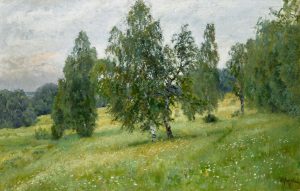 Sotheby’s sales and buying-rates were down slightly, but they had seven works that sold for more than anything at Christie’s – although none were able to break the £1m barrier.

Levitan came closest, with two works of different provenance that both pulled in an identical £909,000. For his Overgrown Pond from 1888, this was impressive: double the low-estimate. But for his larger work Summer, painted in Zatishye near Tver in 1891, it was a disappointment: the estimate read £1-1.4m. An 1894 Repin, showing his 16 year-old son Yuri in Naples, also underperformed, struggling to a low-estimate for £765,000.

In contrast, a string of works doubled published predictions, notably by Ayvazovsky, Korovin and Bogoliubov, whose undated, market-fresh View of Venice speared to £501,000. Three small Pokhitonovs impressed with a combined £406,000; Konchalovsky’s Women Bathing frothed to £488,750; and Konstantin Yuon’s Kremlin at Night (1914) sold well £729,000. His much later Beautful Day (1952), presented to the Conservative politician Rab Butler by Nikita Khruschov during his visit to London in 1956, doubled predictions with £321,000.

Post-war offerings here included two still lifes: Deneika’s 1947 View from the Artist’s Studio at £248,750 and Weisberg’s Two Vases with Peaches at £131,000. A  further 20 works from the Bar-Gera Collection, which Sotheby’s showcased last November, brought a modest £129,500, and there was a purported £6000 auction record for Gosha Ostretsov, currently starring with a solo show in Venice.

Among the Works of Art, A Fabergé clock by Henrik Wigström, once owned by Yul Brynner, landed a healthy £297,000, followed by Taking Ducks to Market, a quirky bronze group after a model by Leonid Posen, on £137,500. A bronze model of Trubetzkoy’s galumphing equestrian monument to Alexander III, known to Petersburgers at The Hippopotamus and now confined to a courtyard in the Marble Palace opposite a boxed-up monster by AES+F, made do with £112,500, but an 1840s ormolu-mounted rosewood and porcelain writing cabinet by Hambs, the German-origin cabinetmakers of Ilf & Petrov Twelve Chairs fame, doubled hopes on £100,000.

Many paintings also doubled their estimates at Christie’s, albeit in a lower price band. Highlight was a Leon Bakst costume design for Creon from Antigone (c.1904) at £377,000, followed by Somov’s small 1932 drawing Matin d’Eté on £281,000. Other fine prices were achieved by Boris Grigoriev, Georges Artemoff, Grand Dichass Olga, Petrov-Vodkin (a £75,000 Self-Portrait) and Stepan Erzia, whose wooden Female Head collected £112,500. Chief Contemporary lot was a Nemukhin Card-Table at £47,500.

A Fabergé silver kovsh and ladle, at £87,500, was the highest-priced work of art as a  Fabergé silver-gilt and guilloché enamel mantel clock, touted at £300,000-500,000, languished unsold. But it was good to see Christie’s catalogue back to a respectable size after their woeful, diddy-format effort last November.

William MacDougall revealed ahead of his auction that ‘strong private treaty sales’ over recent months had encouraged him to be ‘optimistic’ for his ‘great collection of Russian paintings.’ 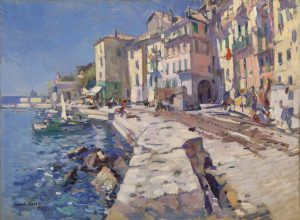 That optimism was fully justified in the case of Korovin’s sun-drenched view of the quayside in Villefranche-sur-Mer near Nice, as it zoomed to £629,700; less so as regards Polenov’s view of Christ Setting Out for Jerusalem or Petrov-Vodkin’s Portrait of an African, both unsold against an estimate of £400,000-600,000.

A colourful, early Masterkova, at £51,400, starred in the Contemporary section but Komar & Melamid’s irreverent 1982 Yalta Conference, showing Stalin in the company of Hitler and E.T., failed to broach its £80,000 reserve.

Works of Art featured a large plaster model of Vera Mukhina’s Worker & Kolhoznitsa, that sold well at £46,800, and a pair of glilded bronze models by Klodt, after his famous Horses & Tamers on St Petersburg’s Anichkov Bridge, that galloped to £108,000.

Pictures by Dmitry Stelletsky headlined at Bonhams, where his 1911 Stag Hunt culled £69,000 and his larger Fox Hunt from 1912 – shown that year at the 9th  Exhibition of the Union of Russian Artists in St Petersburg – raced to £257,000. But contemporary works struggled, with Irina Zatulovskaya’s 2005 couple proudly holding a large fish, whimsically entitled It’s A Boy, making do with just £1875.

Two tea-services caught the eye amongst the works of art: a cloisonné enamel chinoiserie service by Alexeyev (c.1910) at £81,000; and a service in Imperial porcelain with archiotectural scenes, made for Baron Stieglitz around 1866, at £112,500. But a silver-gilt and cloisonné enamel pictorial casket by the 11th Artel was unsold against an estimate of £150,000-200,000.

Takings from Russian Auction Week this June were virtually identical to those of last November at just over £23m. The buy-in rate climbed very slightly to 34%.

Not one lot made it into seven figures. Sotheby’s again dominated the big sellers, with eight prices in the top ten; MacDougall’s and Christie’s contributed one apiece. Levitan and Yuon were each represented twice. There was no major Avant-Garde offering,  and only one work (Yuon’s Beautiful Day) was painted after the death of Lenin. As in November, the list does not include a single non-painting: highest price in the Works of Art was £297,000 for a Fabergé timepiece by Wigström at Sotheby’s. Bonhams’ top price was £257,000 for Stelletsky’s 1912 Fox-Hunt.

Fine Art (Pictures & Sculpture) accounted for 77% of all sales, down 6% from November, with Sotheby’s market-share down 10% (their November total having been fuelled by the  £6.64m Avant-Garde collection of textile tycoon Wilhelm Otten). MacDougall’s widened their market-share lead over Christie’s from 5% to 8%, as every firm bar Sotheby’s posted higher sales in the field then six months ago. Overall takings, though, were down 8% at £17.8m. The number of lots on offer remained roughly the same, at about 600, for the fourth Russian Week in succession; the buy-in rate was stable at 34%.

Christie’s narrowly lost their traditional lead in this field to Sotheby’s, who increased their sales by 77%; together, both firms accounted for 85% of the market (up from 79%). Bonhams’ market-share fell from 19% to 11%, but MacDougall’s doubled theirs to (a still-modest) 4%. The total number of lots was up 10% on November, and takings halted their decline of the past year to rebound 37% to £5.2m. The buy-in rate, however, climbed from 27% to 35%.

Sotheby’s remain the dominant force in Russian auctions and performed unusually strongly in Works Of Art, a field which this June regained a certain buoyancy. Paradoxically, Sotheby’s sold less in total than six months ago, whereas their three competitors sold more. Individual reasons for satisfaction: Christie’s had the lowest buy-in rate (23%); MacDougall’s consolidated their status as number two for Fine Art; and Bonhams confirmed their improved showing of last November. The stability in the overall sale total, and the number of lots offered, can be read two ways: as a failure to build on the tentative market-rebound observed last November; or as reassuring consolidation in what remain, politically and economically, turbulent times. Christie’s proferred an encouraging statistic: 20% of their buyers were new to the Russian Art market. But it is consignor confidence that remains the name of the game.