Roseberys is delighted to be presenting another strong Old Master & 19th Century Pictures sale on 20th July, starting at 11am. 239 lots comprise the auction in a variety of medium, and the works on offer vary from early 16th-century Italian compositions through to late 19th-century Victorian and European pictures. A highlight theme within the sale is works by Russian Masters in particular. In the last decade, London has emerged as the global epicentre of Russian art. The market for superlative Russian paintings is particularly buoyant. Roseberys are delighted to be offering exceptionally strong Russian art works that demonstrate an excellent provenance to the market. It will be the debut auction at Roseberys for Lara L’vov-Basirov, new Associate Specialist of the Old Master & 19th Century Pictures department.

Lara L’vov-Basirov comments: ‘The content of the sale spans Europe, and features early Italian, Flemish, and Spanish religious images; Dutch, British, and Italian landscape and genre scenes; a significant grouping of Russian works; 19th-century European paintings; handsome examples of Northern and Southern European portraiture; a strong contingency of British portraiture throughout the centuries featuring a large number of Victorian female portraits; and a small number of Impressionist oils on canvas. The sale offers an important and varied Russian section (lots 87-90), comprising an early 19th century portrait of a Russian hussar official, an equestrian scene by Nikolai Yegorovich Sverchkov, the ‘Portrait of Count Nikita Ivanovich Panin’ by Rokotov, and an atmosphere landscape by Pawel Dshogin.’ 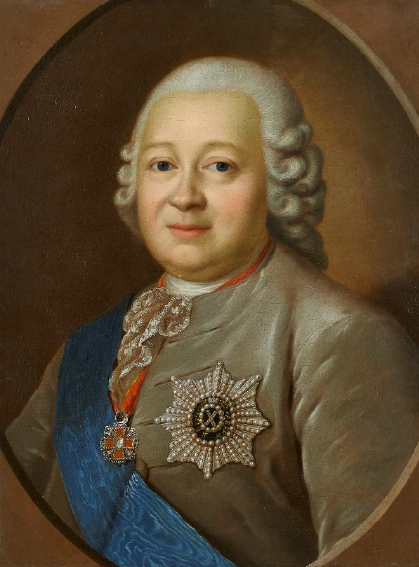 Leading the highlights in the sale is lot 89, an oil on canvas, by Russian Master, Fedor Stepanovich Rokotov, 1735-1808. The Portrait of Count Nikita Ivanovich Panin measures 61.5 x 47.5 cm and comes with a pre-sale guided price of £100,000-£150,000. The portrait is one of Rokotov’s most exceptional and compelling works. Panin was an influential Russian statesman and chief diplomatic advisor to Catherine the Great. The present work was painted by the artist in the 1760s or early 1770s, during his short lived ‘Petersburg period’, after which he moved to Moscow. At the time, the artist was working on the coronation portraits of Catherine II for the Russian embassies abroad, commissioned by the Collegium of Foreign Affairs. Panin is depicted here with the Order of St Anne (received in 1748) and the star-shaped, pearl-spangled Order of St Andrew. This was the highest order of the Russian Empire, awarded to him on 22 May 1762 by Peter III for preventing war with Sweden and for his twelve years of diplomatic service. The latter award was a crucial milestone in his career, and very likely occasioned the commissioning of the present work for commemoration purposes. Rokotov’s palette in the present work is restrained, reflecting the intimacy with which the subject is treated, and in keeping with the austere and economical range of colours generally adopted in his intimate portraits. Rokotov is often celebrated as the ‘Russian Da Vinci’, due to the curious ‘half-smiles’ he bestows his subjects. Indeed, his portraits were widely admired at the time for their psychological realism, and the sympathetic, soft rendering of his sitters’ features. Interestingly, Panin and Rokotov were both members of the same Masonic organisation, the Moscow Masons Lodge. 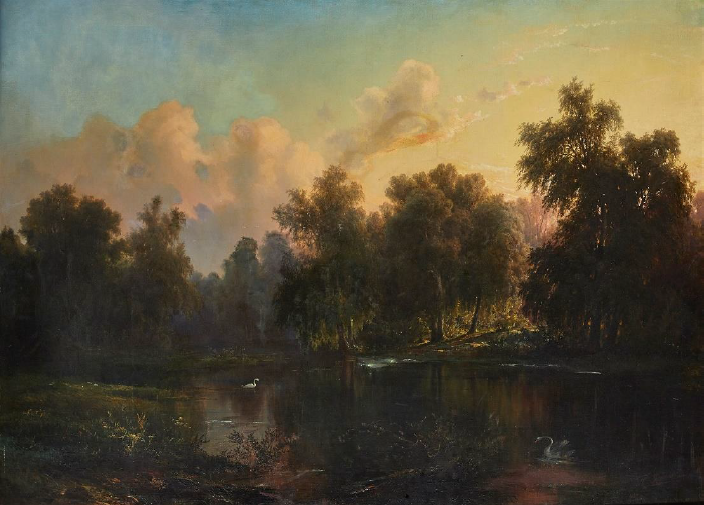 Pawel Pawlowitsch Dshogin, Russian 1834-1885- Dusk; oil on canvas laid down on board

Lot 90, that comes with an estimate of £12,000 – £18,000, is another work by Russian Master, Pawel Pawlowitsch Dshogin, 1834-1885. Dusk (oil on canvas laid down on board, signed and dated ‘1867’) measures 97 x 135 cm. A typically atmospheric oil by the nineteenth-century Russian landscape painter Dshogin, it recalls many of the artist’s works, in its dramatic early evening sky, its large scale, and its absence of human forms, thereby emphasising the immense and impressive expanse of the natural world. 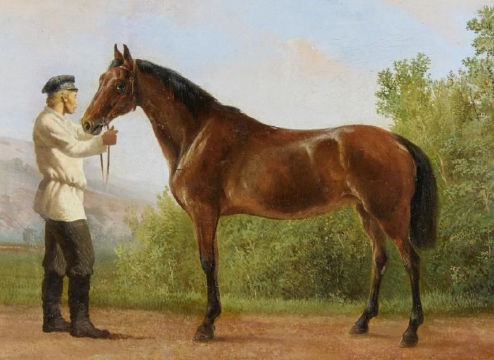 Nikolai Yegorovich Sverchkov, Russian 1817-1898- A Groom and his horse; oil on board

Nikolai Yegorovich Sverchkov, 1817-1898 – A Groom and his horse; oil on board, signed in Cyrillic with inscription, measuring 24.5 x 32.5 cm, also is a noteworthy Russian work on offer. Celebrated for his depictions of animals and people, Sverchkov proved to be a popular choice amongst European collectors and the Imperial Court of the 19th Century. His depictions of historical scenes and equestrian subject matter earned him a considerable reputation across Europe, particularly in his ability to portray the sense of motion in his paintings of horses. During the 1840s, Sverchkov would travel to various stud farms to paint scenes of horses, which would inevitably develop his skills and lead to further commissions from prominent studs, including from the Khrenovskii and Chesmenskii stables. This work has previously been exhibited at Philadelphia, ‘International Exhibition of Arts, Manufactures, and Products of the Soil and Mine’, May-November 1876, no.7. It comes with a provenance with Anon. sale, Trinity Auctions, USA, 3 December 2011, lot 174.; Anon. sale, Doyle, New York, 13 February 2019, lot 118. The oil of a groom and his horse has been given a pre-sale estimate of £1,000- £2,000. 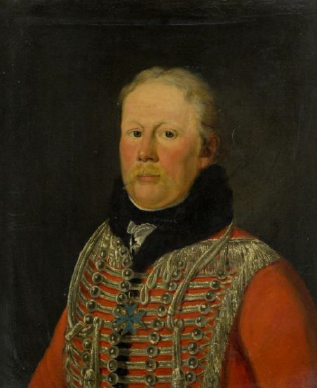 Rounding up the highlights of Russian works on offer is lot 87, is this dashing portrait of a Russian hussar officer, European School, early 19th Century. This oil on canvas, measures 65 x 53.5 cm and comes with an estimate of £300- £500.

You can find the fully illustrated online catalogue on the Roseberys website here.

If you are interested in any of the works on offer at Roseberys within the upcoming Old Master & 19th Century Pictures, please contact the Head of Sale Lara L’vov-Basirov