Pokras Lampas on his commission for Dover Street Market

In the end of November this year the Russian-born artist Pokras Lampas unveiled his monumental mural created on the facade of Dover Street Market in London. Lampas is one of the world’s most famous calligraphy artists, who became famous for his unique fusion of graffiti and calligraphy called “calligraffiti.” His self-developed technique cought the attention of the famous minimalist fashion designer Rei Kawakubo. Kawakubo has already been known for he appreciation of Russia and Russian art and she openly declares her interest and support of the Russian world of design. Lampas and Kawakubo collaborated on the series of installations for Dover Street Market’s many international locations which include not only London, but also Beijing, New York and Tokyo. RA+C correspondent Anna Kanunikova met with the artist to talk about his practice. 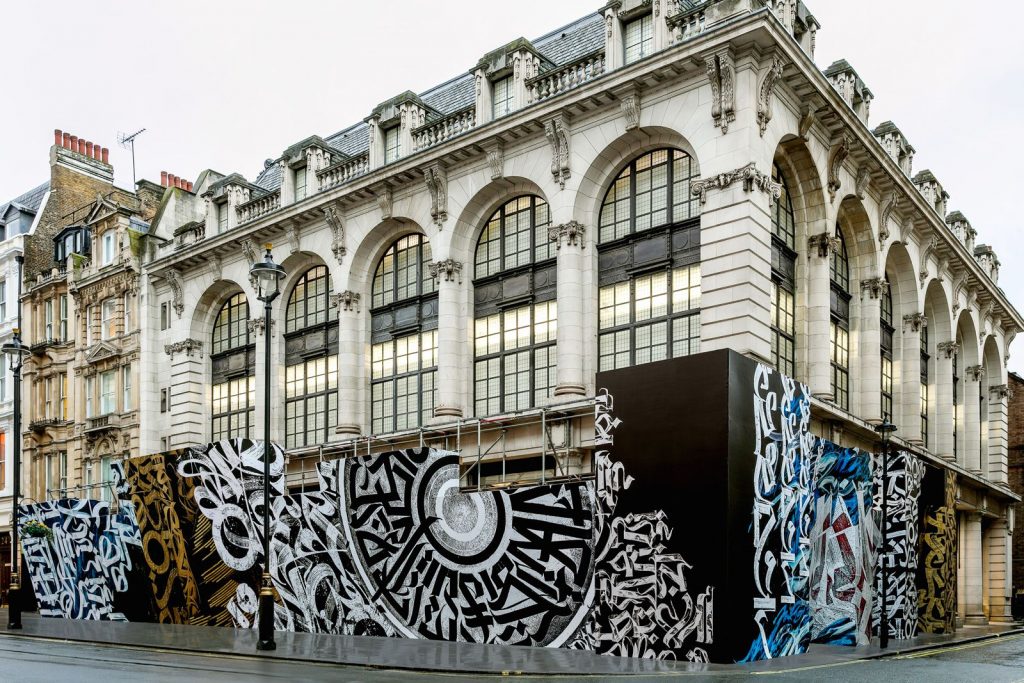 Anna Kanunikova: Pokras, your project in collaboration with the CDG brand is a series of large installations in different cities of the world. Tell me, please, how this project started and why you got involved in it?

Pokras Lampas: This project was initiated by Rei Kawakubo. She invited artists and designers to create a set of graphics. They then were used to create interesting books, postcards or collages, which were posted all over the world. For this project Kawakubo worked with a number of globally acclaimed artists, such as the French photographer and street artist JR, and also collaborated with DAU Magazine. This year CDG focused on typography and calligraphy. They reached out to me as the major representative and innovator of this style and asked to create the work over the period of 6 months. At first the graphics were used for various purposes, such as Fashion week, and later turned into the large-scale installations which are now placed all over the world. 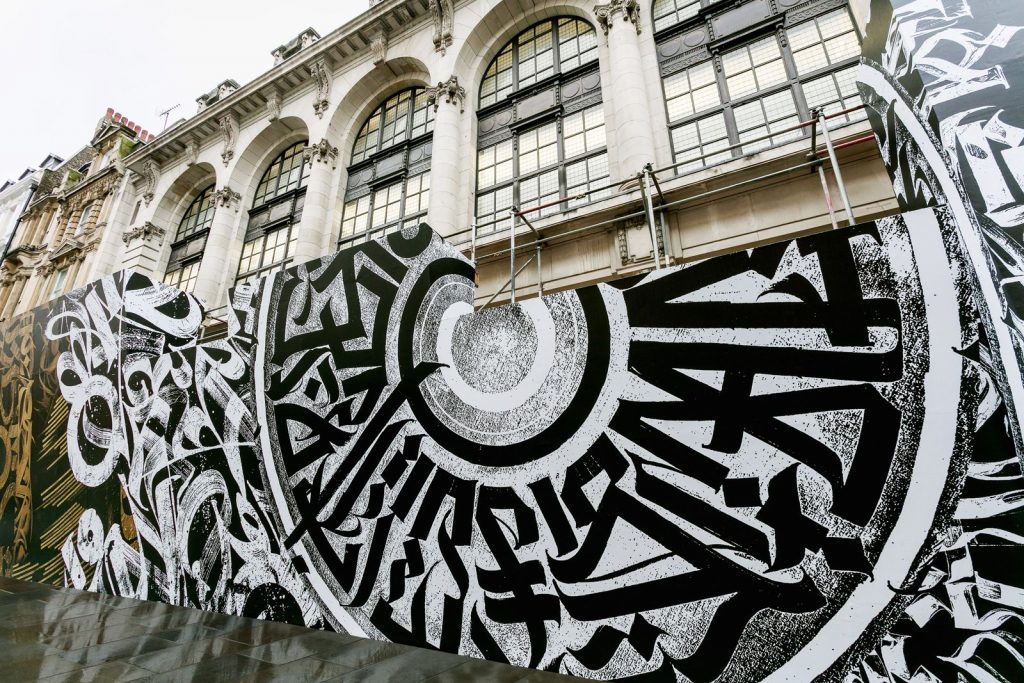 А: Is the London installation the first one in this series?

PL: No. The first installation appeared in Tokyo and was followed by the works in Beijing and New York. The London installation was unveiled on 29 November simultaneously with another one in New York. The final work in the series was created in Paris.

A: Are they site-specific? What is the process of their creation?

PL: Unfortunately, it is impossible to create these works on site due to their scale and our tight schedule. The work was first made on canvas and then transferred into the digital format. It was later developed into the series of canvases which was used to create collages printed for the installation.

Pokras Lampas, Void of the Memories, 2019

A: Prior to that you have also worked with several famous brands, such as Fendi. What are the specifics of cooperation with CDG and Rei Kawakubo?

PL: I really liked their message. When we have just started, I asked for the history of their collaborations and ideas for texts that we could write together.  Among other things there were two ideas that stated: ‘Wear your freedom’ and ‘Wear with feelings ‘. These seemed to me the perfect way to unite art and fashion. Many of their texts in general speak about freedom, feelings, creativity and I think these ideas are very important and they should be communicated through completely different formats and projects. Another important factor was freedom of expression: Rei and her team not even once edited what I wrote. On the contrary, they were very open to what I was doing, they always gave new interesting meaning to my work and as an artist I was excited to observe how a designer reinterprets and sees my work. 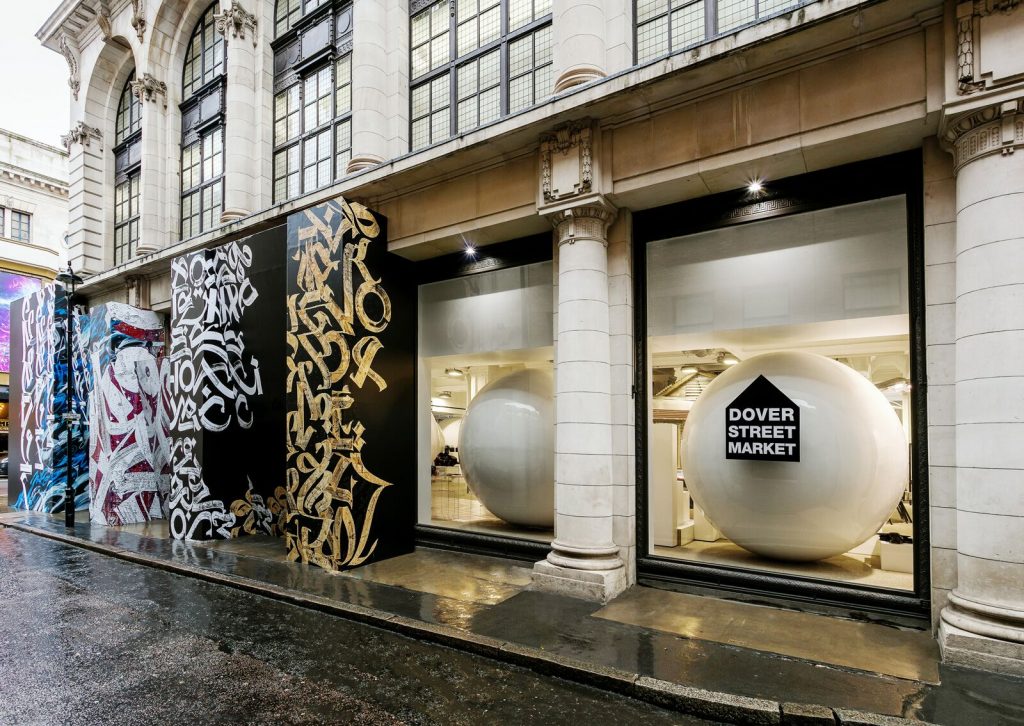 А: Is this kind of freedom of creativity a rare phenomenon in collaborations?

PL: From my experience I would say it is not particularly rare. I am interested in expressing myself in one or another form through the collaborations. My main requirement in such projects is not to be limited artistically. CDG is a well-known both for their stores and their unique style and statements. When they give such credence to me as an artist, I value the importance of it for my work.

A: Your every work has their peculiarities and there is often some hidden meaning and features. What were the key meanings in this series of works?

PL: Perhaps, the most important feature is that I maintain my main concept – I mix different cultures through calligraphy, and the writing presented in our collaboration highlights this. There is no single pronounced language or any cultural identity with which this language can be associated. This, in fact, is a test of whether this work can look relevant both in New York and in Paris and Tokyo, in world capitals, where the agenda of multiculturalism is the most relevant. I think that it is precisely the power and scale of these cities that emphasize these works.

А: Contemporary art is often complex and tricky to understand, especially for people outside the realm of art. In your experience, are there any differences in the perception of this art among people in those countries where you presented your projects?

PL: First of all, I would like to parry your first statement about the comprehension difficulty of contemporary art. We are now living in the age when art has gone beyond the museum and gallery walls. Look at the ideas of postmodernism – they are about mixing different social strata, about the possibility of replicating art, which remains art, nonetheless. The pop artists, such as Andy Warhol, and the artists of the later movements, such as Jean-Michel Basquiat, Keith Haring, Jeff Koons, Murakami are all the examples of the art being embedded in the everyday life. Collaborations with brands, works in the streets, phone screensavers – all of it is both right next to us and in the major collections of the largest museums. In other words, such art exists both inside and outside of the institutional paradigm. This dispersion of contemporary art provides space for reflecting on how we often do not recognize that we have just passed a work of art, although had we seen the same piece in the museum space, we would have perceived it in a different way. Ut all comes down to the viewer and how open we are.

A: Does interest in the contemporary art differ across the countries? Is contemporary art in Russia less popular with wider audiences because of the social conservatism and reluctance to accept the challenging practices?

PL: I think it is a matter of generations. We live in different paradigms, our generation is capitalist, the generation of our parents, grandparents is socialist. In the west the capitalist system and art are closely intertwined. This system meant a lot of resources spent on opening new museums and galleries, on the search for new experimental artists. On the other hand, in the Soviet Union there was the distinct party policy, strict censorship and persecution of the artists. All this informed the attitude towards art of the several generations and made them less perceptive of something new. In my opinion though, it is no longer a problem: the new generation is here, it is changing the world as we speak, and it is feeling fine in the Russian atmosphere. At the same time, as an artist, I find it very interesting to establish a dialogue with the older generation, because when you find common ground, you will see a lot of initiative, support and sincere interest. 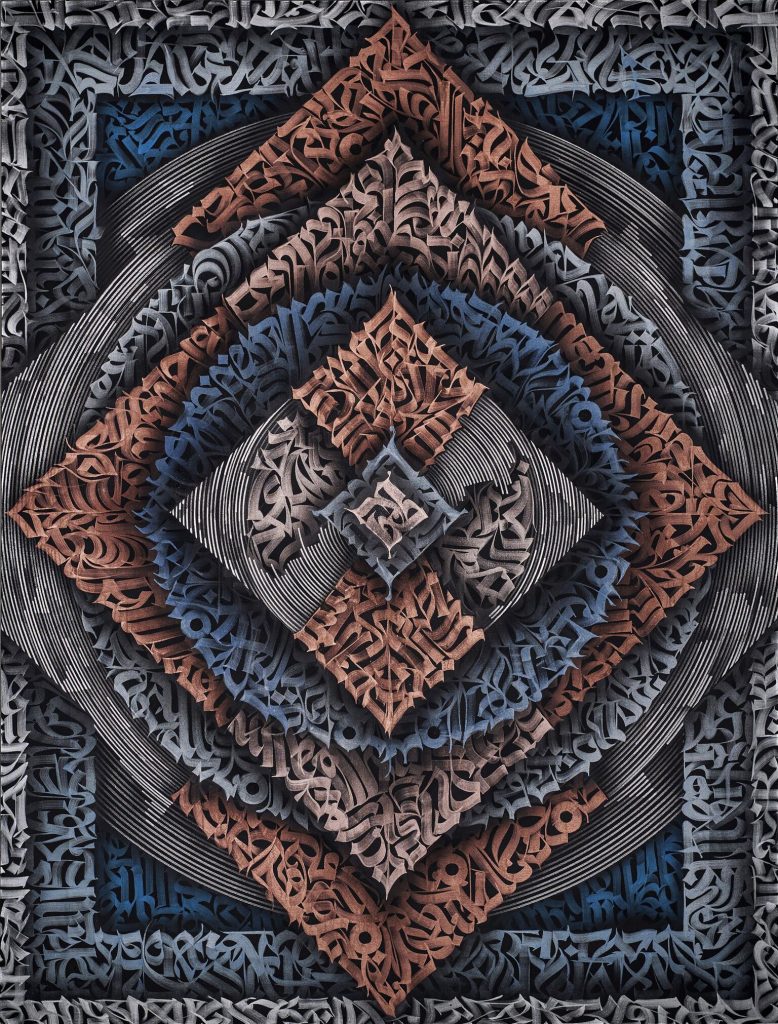 Pokras Lampas, Mark of the Harmony, 2019

А: Nowadays, in the age of globalization, many artists face the issue of positioning themselves. That is, whether the artist positions themselves as an international figure, or whether they have a distinct cultural connection to their homeland. Is it important for you to position yourself as an artist from Russia, or do you perceive yourself as a “citizen of the world”?

PL: I am trying not to position myself as an artist attached to any particular geography and culture, as it imposes certain limitations. My position depends on each specific work, however. For example, for a certain project I could say: «Being a Russian artist I want to redefine the Cyrillic alphabet in the context of Arab culture». Such a project could be presented at the Biennale in Sharjah. Here I am acting as the representative of the Russian culture and portray through the lens of Arabic culture. That is just one case. The other example is my project in Yekaterinburg. Here I turned to the Soviet avant-garde. I explored how the cross, often used by the avant-garde artists, has both religious and aesthetic connotations. In this case the fact that I am a Russian artist is not as important as my knowledge of the local cultural context. If that project later goes abroad, everyone would be more interested in how Russian avant-garde fits into the global context. There are also cases when I exhibit my work in a gallery and people don’t realize that I am from Russia. For example, that happened in Shanghai when I had an exhibition during their Art Week. My calligraphic canvases resonated with their culture. So you see, each case is unique. Artist are increasingly mobile today and this mobility gives greater freedom and independence. 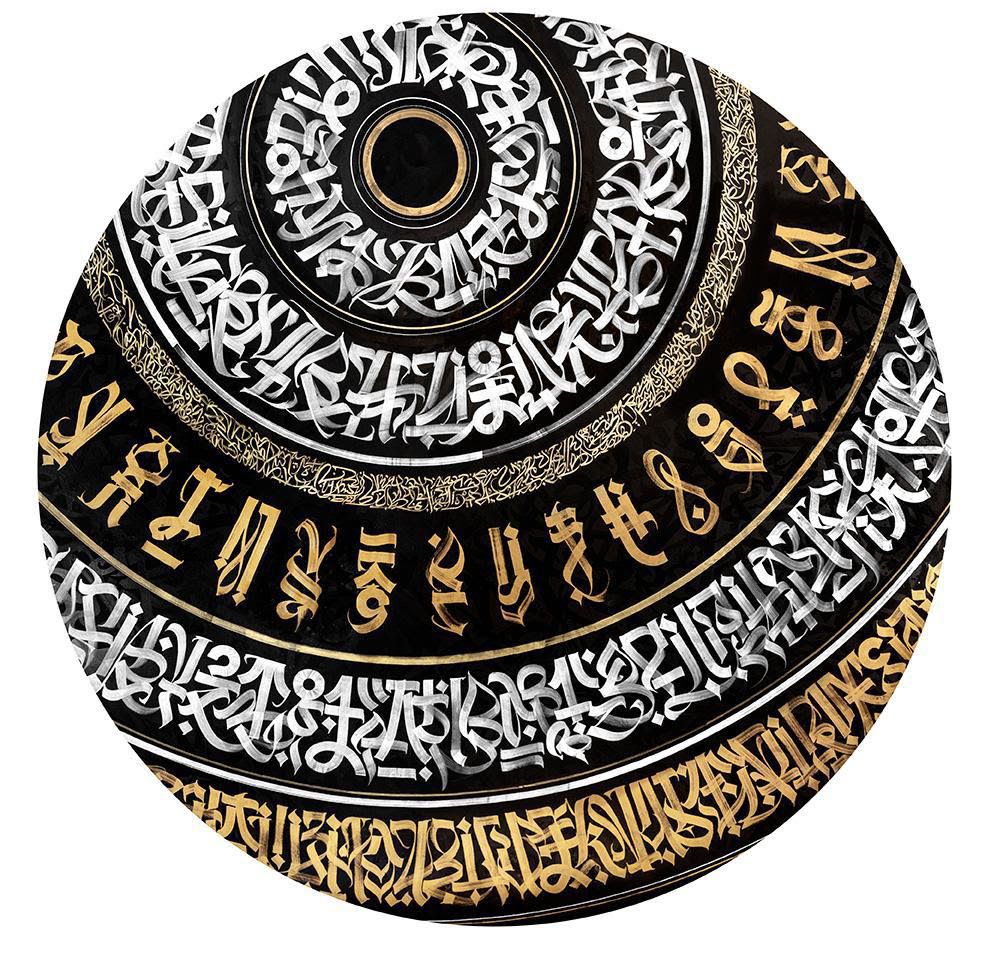 A: Do you think it is important to promote Russian culture and its values abroad?

PL: I think it is very important as long as it remains meaningful. This applies not only to Russian art, but also to many other topics. For example, today there are a lot of projects on ecology or multiculturalism, but while some make a valuable contribution to these fields, others just try to benefit on the buzz around these subjects. Promoting Russian culture requires attention to detail. It is a very rich field, that has a lot of potential. We just need to find the right way to speak about it to spark the interest.

A: Pokras, what inspires you today?

PL: I would say that the “flow” I am in right now is my inspiration. It includes many things: the news agenda, literature, graphic material, old and new paintings, unexpected thoughts and ideas. For example, just recently I came up with a concept for the project that had already been coordinated. Even if this concept does not get accepted for this project, I will definitely realize it some other time. That is why being in the “flow” is so important to me.

Currently, the artist is working on preparations for projects, including solo projects, both internationally and in Russia; in particular, he is interested in projects in various regions of the country, outside of capital cities.

Other Articles By Anna Kanunikova 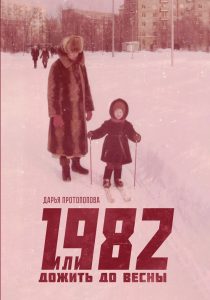 Station “Russia” at the Architectural Biennale 2018 in Venice