Oscar Rabin: If I Had a Literary Talent, I Would Write 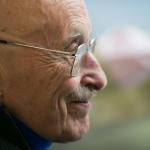 The patriarch of Russian non-conformism, the leading member of the Lianozovo group and organiser of the famous Bulldozer exhibition, Oscar Rabin celebrated his 90th birthday in January 2018. To mark this anniversary, collector Mark Ivasilevitch of Russian Day with the support of The State Russian Museum in St Petersburg, and  founder of the AZ Museum in Moscow Natalya Opaleva, organised Rabin’s jubilee exhibition at the Grand Palais during the Art Paris Art Fair this April. The exhibition was a significant event: many friends and visitors came to see the new paintings, including the artist Mikhail Shemyakin, French couturier Jitrois, gallerist Olga Soldatova and many others. We could not miss the opportunity to interview Oscar Yakovlevitch. He is an amazing person who radiates wisdom, friendliness and calm. Just read and see for yourselves.

Oscar Yakovlevitch, are you pleased with the exhibition?

Yes, I am very pleased. I had many exhibitions in Paris, but the one on such a great scale is happening here for the first time. It is the most significant gift for my 90th birthday.

Can you say that France and Paris have become your home? 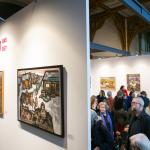 The exhibition at the Grand Palais this April

I do not have any other one, you understand? I am not sure if I can call France my own country but I have no other. If I go somewhere, I have nowhere else to return, but to Paris. And nowhere else do I feel needed as much as here.  And I need Paris, too. With France, of course, it is more difficult, because I was not born here and did not experience everything that the French went through. Therefore, I do not deal with any political or social problems in France with my art. I understand that I will not be able to respond to them in such a manner, that it would reach the French audience and touch this special string in their souls.

I paint my inner life as I perceive it. I made some paintings of what I love in France – the provincial landscapes, which is not very typical of me. I perceive France only lyrically, but, obviously, this is not enough to address the people here.

And what about the restoration of your Russian citizenship, then?

Well, this is another Russia. I left the Soviet Union. I was born there, lived there, and left the Soviet Union. So, when they ask me, if I am a French or a Russian artist, I reply that I am, actually, a Soviet artist. I have never known or seen the old Russia. Neither do I know the new one: I have visited it for a few weeks, but that does not mean that I now know the country. Many things are still the same, and yet, this is not my Russia. Oh, but please, do not think that I am a fan of the Soviet Union — I hated that system.

How could you characterise your work in your own words?

My paintings are the life that surrounds me. It is everything what is happening to me or my loved ones, my relatives. And by saying “relatives”, I am using the word in the broad sense: this can mean the country, as well. It is my inner life captured in paintings. 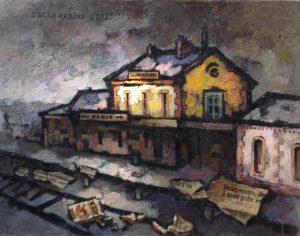 I would like my work to find an inner response in the hearts of other people. And I am not interested in anything other than this.

And which of the recent paintings is most dear to you?

The Abandoned Train Station. St Michel.  It is a forsaken provincial railway station. A quiet, modest picture. It is about loneliness. Even though we are leading an extremely busy and noisy life here on earth, many of us experience this feeling. And not just the people, but the objects, as well.

Please, could you tell us a bit about your latest painting Gare Père Lachaise. Terminal, which you have been working on for 10 years and which is the highlight of the exhibition?

It is the one about me, about my life. I have lived a long life: there was youth, and love, and children. Everything, that a person requires, I had it. And sorrows, and joys. And even the old age itself, which is also believed to be something good. Surprisingly, it also turned out to be a happy time for me. I should confess, that the one who turns 90 is not particularly overjoyed with this fact. However, everybody says, it is a very good thing! 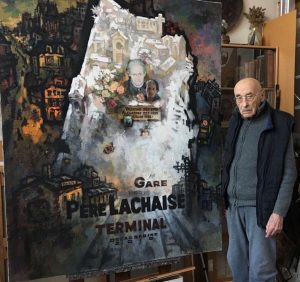 I was simply hoping to make a painting which could somehow capture my life in Paris. And you know, no matter how hard I thought or tried, nothing would work for me.  And then I realized that the most important thing which exists in my life, is that I have two homes. One home is where I now live in Paris. And my second home, where my son and my wife are, is awaiting me, too. They were buried here. And this is the most important thing that has happened to me over the 40 years spent here.

You seem to have a preference for certain images recurring in your paintings. What are they? Archetypes of  Russian life?

Somehow, I am trying to capture my life, express my feelings about my experiences. A herring for Russia (and those who lived there, would know) is practically an equivalent of the bottle of vodka. Well, not entirely, but still. And besides, I like the appearance of the herring and its shape — as an object. I call such image a character, a personage. And in the same manner, the icon is a character, and the crucifixion is also a character in my compositions.  I use them to convey what I want to express.

I am not an abstractionist, I cannot tell the whole thing through the light alone. It will help, it will, no doubt, enhance the mood. And yet, I believe, that if I had a literary talent, I would write. Since I am completely devoid of any literary abilities, I narrate through my paintings by trying to bring all these objects together.

And which role does the light play in your paintings, then?

Well, formally, this is an opportunity to highlight and emphasize what is most important for me. And not only formally, for the light creates a certain atmosphere, some kind of comfort, the sense of human warmth. Something like this, perhaps.

And, finally, you quite often interpret the topics that can be viewed as Christian, religious. And here is exhibited one of your impressing paintings named King of the Jews…

Well, quite recently there was a film released in Russia titled as The Flight into Egypt. I do not belong to any confession or follow any religion, however, while watching this film, you may get the impression that I am a religious person and a believer. I am as much of a believer as any person is. Neither do I belong to those who do not believe in anything (I think that, generally, it is impossible not to believe in anything. A person should believe in something). Nor, can I say that I belong to the group of believers, although Christianity is, perhaps, much closer to me in the sense that I grew up in a country that once used to be Christian. And even the fact that at some point this country rebelled against religion, and seemed to have stopped being Christian (and hence are the persecution of the believers, general atheism, and so on) – nevertheless, this Christianity did not just disappear overnight. These Christian foundations used to be present in life and culture,  and they manifested themselves somehow.  All this is quite complicated but, nevertheless, true…. 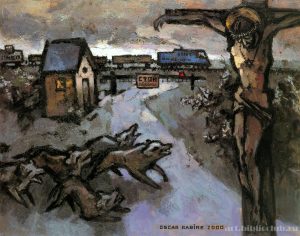 I have been brought up on the amazing church architecture. Of course, I have always liked the icon-painting, and the art itself — all art that came into existence through Christianity and on its accaount. The great art. Nevertheless, I turn to Christianity in another sense. I do not see it as a religion, but as an object of everyday life, which surrounds me somehow. This has always been something relevant to me, and it was also fashionable to have icons when I was young. If one looks at my works, one may single out approximately 20-30 objects that recur from painting to painting throughout my whole life. And they happen in my art even now. I treat them as characters, because I seem to fail depicting people: they come out as caricatures, not humans – not that I haven’t tried! Still, it is not the caricatures which I am after, but my feelings, my life depicted in my paintings. I have no intention to ridicule someone or something. And here, the King of the Jews is very direct, strong, practically — head on, as the wild wolves surround it. I very rarely do such poster-like works, and yet, this is how it used to be in real life! They persecuted the religion all the time, and I wished to express my sympathy. This is the way I am: there are people who are always on the side of the winner and themselves belong to the pack of winners. And there are those who belong to the flocks of the poor and persecuted. And I am always on the side of the persecuted and oppressed ones. Therefore, even though I have not been persecuted throughout my whole life, my sympathy still lies with the humiliated and oppressed.