An upcoming exhibit at the Magnes museum in Berkeley brings to light a fascinating yet little-known slice of modern European Jewish history.

One hundred years since the publication of Chad Gadyo, an illustrated version of the famed Passover song by the Russian Jewish artist El Lissitzky (Lazar Markovich Lissitzky, 1890-1941), a rare copy of this work has now found its way to The Magnes, thanks to a gift by Ira Fink and Penni Hudis of Berkeley. 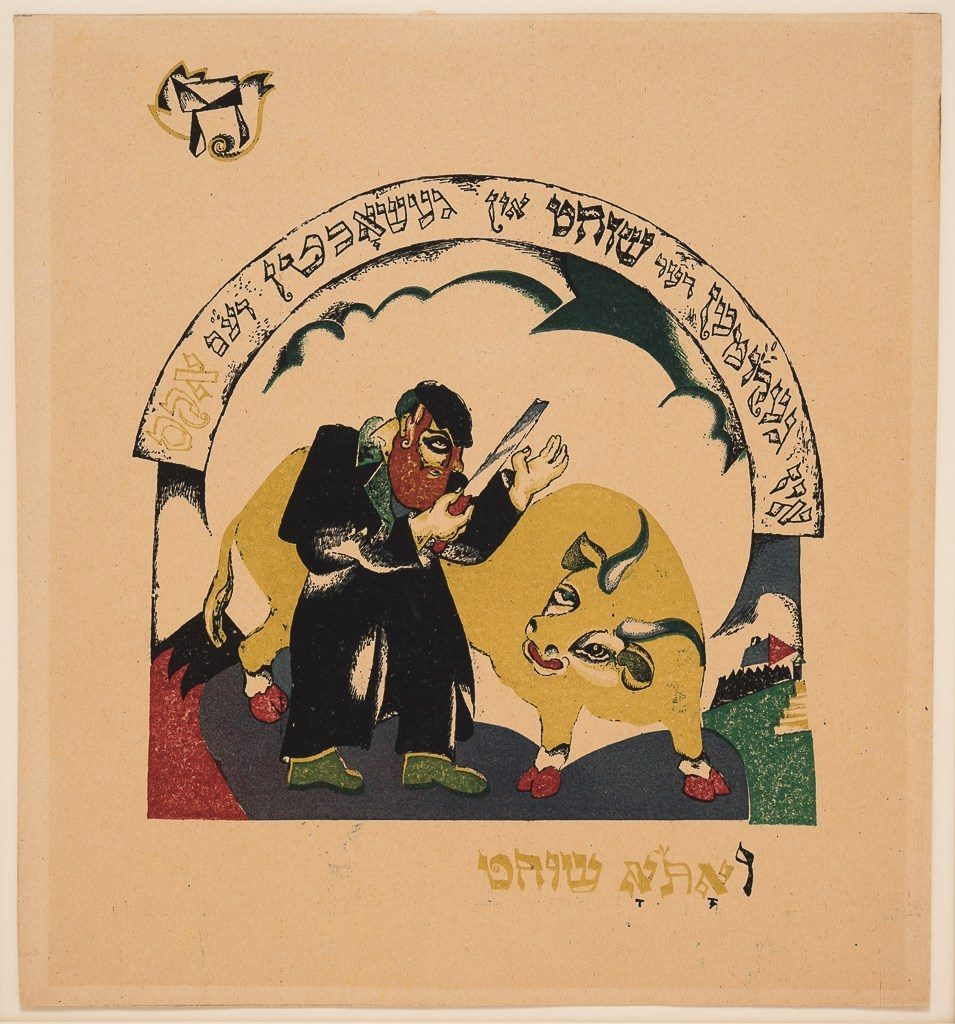 El Lissitzky’s illustrations follow and augment the “story of the goat”–a song that concludes the Passover Seder–with evocative images, accompanied by Yiddish and Aramaic texts. First printed in Prague in 1590, and known across the global Jewish diaspora, the song tells of a father buying “one kid” (chad gadyo, according to the Ashkenazi pronunciation of the original Aramaic), or “a little goat” (a tsigele, in Yiddish), for two coins. It continues with a cat eating the goat, a dog biting the cat, a stick hitting the dog, fire burning the stick, water quenching the fire, an ox drinking the water, a slaughterer butchering the ox, and, in a theological ending, the Angel of Death killing the slaughterer, and God slaying the Angel. Each of the song’s ten verses is captioned, illustrated, and numbered on a dedicated plate.

Chad Gadyo was first published by El Lissitzky in Kiev in 1919, in an edition of 75 copies (only about twelve of which can still be traced today in public collections worldwide). Since then, the connections between the artistic Russian avant-garde and early 20th-century Jewish ethnography have become more evident. The careful documentation of Jewish folklore that had begun in Czarist Russia and continued in the Soviet Union inspired many artists to create innovative works that combined traditional motifs with new expressive forms. Folk tales, proverbs, and songs, as well as visual motifs from synagogue murals and gravestones, were not only collected and preserved in Soviet archives, but also transformed into literature, music, theater, film, and visual art by a new generation of socially concerned artists and intellectuals.

Created at a time of great cultural renaissance and of increasing physical danger for the Jewish communities of Eastern Europe, this stunning work projects the power of preserving cultural memory through art and activism into our day. Following the recent gifts of the Taube Family Arthur Szyk Collection and the Roman Vishniac Archive to The Magnes, the acquisition of El Lissitsky’s Chad Gadyo marks the beginning of a new season of renewed interest for Jewish visual culture on the UC Berkeley Campus.