I FIRST came across Oksana Mas in an upstairs gallery of Kiev’s Saint Sophia Cathedral in 2010. Her giant Madonna, made entirely of painted eggs, was a work no man, woman or chicken could ever forget. 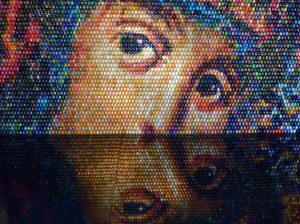 In 2014 I was invited to her Culture Code show in Almaty by Mariana and Madina Gogova of Moscow’s ArTwin Gallery. It involved a range of eye-catching media, from painted curtains to gilded car engines, and featured square lacquer panels symmetrically adorned with laser-cut plastic shapes symbolizing the ground-plans of churches, mosques and synagogues in ideal Spiritual Cities, ‘where all cultures and religions are united.’

The same mystical title was used for Oksana’s stupendous solo show staged at the Museo MA*GA in Gallarate, 25 miles north-west of Milan, from 8 October 2017–7 January 2018 – and for its scaled-down reprise at Sotheby’s swanky Milanese premises on Corso Venezia from February 2-4.

The Sotheby’s show involved three rooms. The first was shared between white-and-black Modernist icons and panels from the Spiritual Cities series.

Two of the icons, The Last Supper and Madonna & Child, exuded minimalist brilliance. I doubt Mas will ever do anything better.

Oksana Mas is never where you expect here. The second room showcased her as a painter of more complex vein. From afar, the circular work below left – a hefty 5ft 7in in diameter –  looks like a roughly daubed abstraction. Yet figures blur into view the longer you look and, up close, you encounter a mass of psychedelic coils and spirals whose intricacy is enhanced by being on different levels: the virtuoso Mas has built in a 3-D effect by applying successive layers of acrylic and varnish, like a Japanese lacquerist.

The third room contained some even bigger surprises.

I don’t mean her circular Mandala Dances, although their positioning either side of giltwood rococo door-frames was an aesthetic delight. 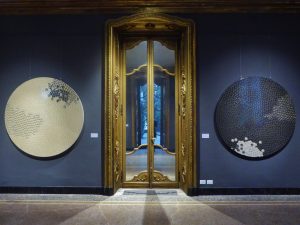 Again, close-up inspection was warranted: these mandalas are composed of round and egg-shaped stickers with tiny pictograms of figures walking or cycling. The effect is startling when you first see it – but I’d seen it in Kazakhstan. 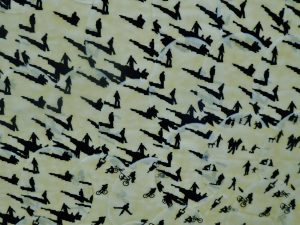 The opposite wall was hung with two giant canvases from Oksana’s 2017 Total Wi-Fi series. Seven were on display in all. 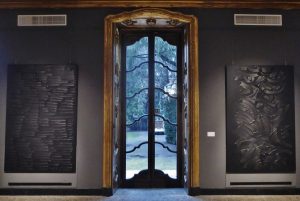 One – all swirls and circles – seem like a colour-starved Sonia Delaunay.

The oily, tactile, sensuous handling of paint is more Molodkin than Soulages.

And it’s not just paint. Manic pencil-strokes criss-cross the canvas, in a relentless up-and-down that Mas likens to an electrocardiogram. 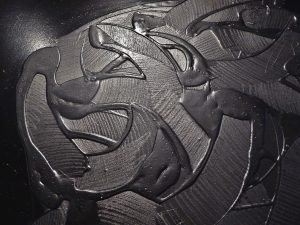 She is, she says, ‘aiming for infinity.’

At the far end of the room four giant canvases were hung side-by-side, again dating from 2017. They were collectively entitled Flamenco, but the absence of colour made you think of Whirling Dervishes rather than scarlet-clad Gypsies.

Absence of colour? Not so fast. Splashes of red, glimpses of yellow, undertones of blue and vigorous daubs of muddy grey bring the surface to life. 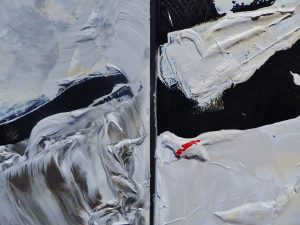 Why, I asked, had Mas swapped her hi-tech approach for back-to-basics brushwork?

‘No contemporary artist should be afraid of changing their technique, or of jumping from one style to another’ she replied, a little defensively. ‘Many recognizable artists find it hard to change.’

But still: all this powerful paintwork – utterly different from what she’d done before. What had made her change her approach so radically?

‘My new works are more energetic’ she agreed. ‘I feel more energetic. I feel everything is just beginning. Three years ago I had twins: Eva-Sophia and, one minute later, Cristina-Stefania. I received a kind of upgrade as a mother – energy from the depths. It is the essence of womanhood that a woman can combine being a wife and mother with her career, and pursue her creativity. A woman has enough energy for all these roles!’

Oksana is 48, knocking on 30. With her mop of blond curls, she looks like a feminine version of Sir Simon Rattle – and equally blessed with eternal youth. She’s tall and trim and, as we speak, in the lobby of her four-star-hotel, ensconced in a leather armchair with a red shawl draped around her shoulders. She’s wearing grey. No jewellery. Later, at Sotheby’s vernissage, she paces the halls in all black and stilettos. You half expect her to unleash a haka.

Gallerate was, astonishingly, her first big solo show in Western Europe. Its 150 works included her powerful Quantum Prayer series of car engines coated with Murano glass. These, for lack of room, didn’t make it to Milan but, she says proudly, ‘it’s the first time Sotheby’s Milan have staged an exhibition by a living artist.’ A small show, she admits, ‘but a huge step.’

She divides her time between Figueras in Catalonia – ‘I’ve loved Salvador Dali since I was young’ – and her native Odessa. ‘I am in a very happy period’ she says. ‘I have small children and my parents are still alive. It won’t last!’

Spanish summer temperatures can soar to 45°, but that doesn’t faze her. It helps her paint dry quicker. ‘I’ve no patience’ she grins. ‘And I love the light and bright colours of Figueras – even brighter than in Odessa!’

In which case – why her current obsession with black?

Art, she believes, is about balance. She’s had her ‘colours’ period, now she needs monochrome. But ‘exploring black is not always sad’ she adds. ‘There are layers. Big depth. Malevich used a huge mix of colours for his Black Square.’

Sadly Oksana’s shows in Gallerate and Milan have been and gone, but some of her works can be admired at nearby Malpensa Airport until the end of February, and a handsomely-illustrated 116-page Spiritual Cities catalogue – with installation views from MA*GA and Malpensa – is available from all good bookshops.