“Here I go again”, famously carolled Whitesnake frontman and ex-Deep Purple songsmith, David Coverdale, “goin’ down the only road I’ve ever known’. Thus it is with Russian Effing Art Week, my little Trussed Turkeys. ‘Like a drifter, I was born to walk alone!’, sang the Sage because, let’s be honest, life is such a grind at present, no-one reads my articles, except JR the Bosham Brainbox (before Kristen got him), R’D’W, the Muscovite Munificence, BGM the Saint from Sloane Street (address withheld) and my dog, Gibson. When he can be arsed.

In the past, at least my reviews made people angry and, as any great artist will tell you, anger is better than apathy. In the past we have received mail accusing me of being gobby, guilty, arrogant, likewise, an irrelevance, probably. But now? One reader, with links to a Russo-Ukrainian crypto-fascist underground pop group even threatened to ‘out’ me on the internet for quoting historical facts and having an aversion to my ‘tone’. But now?

It’s all such a grind, summoning up fake enthusiasm for sales that were, to quote my favourite philosopher, pretty crap. But go again I must, duty calls and the Editor of RAW has a kick like a mule. “A chto? Pisat’ ne budesh’ pridurak. Poluchish’. You get the picture which, after frenzied bidding, was the case on a number of staggeringly yucky works at RAW.

A damp squib is a phrase, perhaps, not known to many? It refers to a firework that has failed to ignite or, in the case of Russian Art Week, a fiasco. Worst of all, it’s not even an interesting fiasco, it’s a dire and depressing fiasco. A metaphor for life, especially as we are all going to die, one way or another, from the XI* variant.

The verb to ‘withdraw’ has, especially to those with the age of the above-mentioned Roman numeral, somewhat schoolboy connotations but in the art market, a world that has no link to reality, it means mystery, cloak-and-dagger, a Roman Chandler inside a Christie (over my dead body), wrapped by a Holmes.

At Bonhams, the top lot, a Serov of someone who made Bela Lugosi look like Brad Pitt, was withdrawn. At Sotheby’s, the ‘Premium lot’, a moniker that made a decent picture look like something you might find on the shelves of Asda**, a still life by Petrov Vodkin, was also withdrawn. No-one, even those with their noses to the ground seems to know why. Hercule sodding Poirot would have his work cut out.

Was it an irrevocable bid? Were there questions regarding ownership, export papers, owners’ links to drug cartels? Answers on a postcard to our Editor at No. 24 Whogivesatoss Street, London.

What happened? Haven’t got a Scooby, guv.

Back in Paris, a capital about to be as accessible as Gotham City, lot 67 at Millon (alykh roz) did, I am overtaken by football-speak, great. Estimate 600-800 euros – sells for 16,250. Why? A Mighty Mystery. Maybe Maximov? 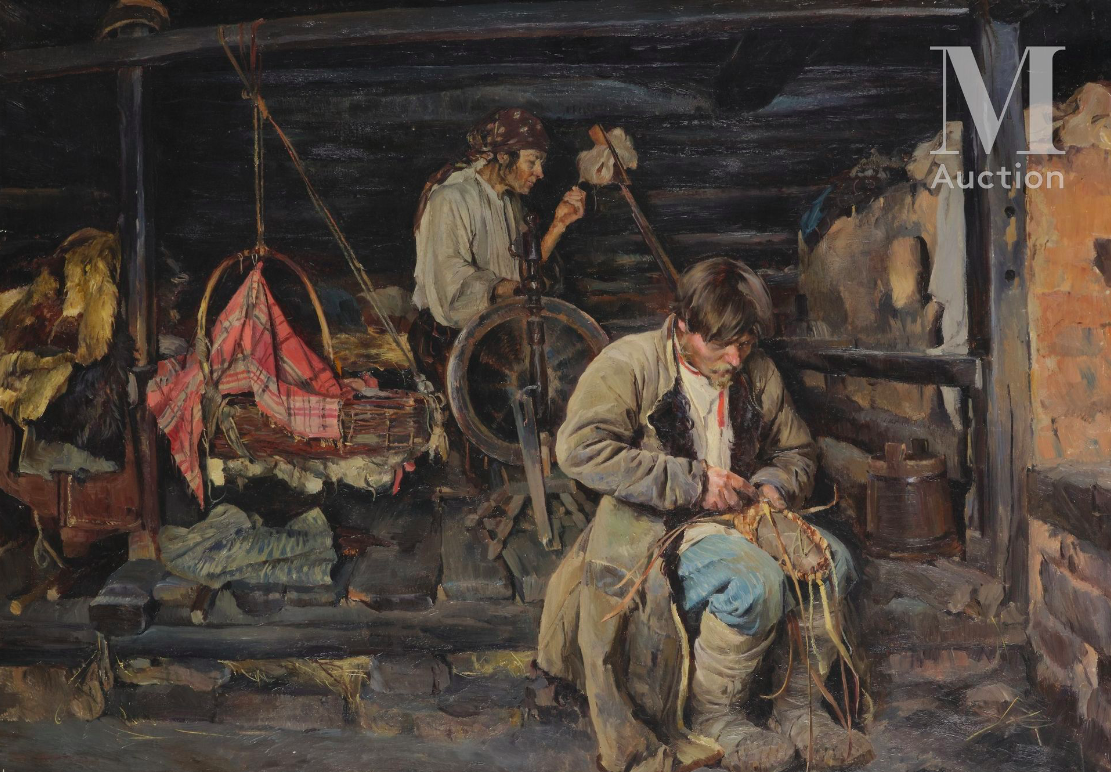 Bonhams bombed, Christies crashed, alliterations abounded but, to be fair, a phrase uttered by football players and similarly intellectually-challenged titans the world over, this article is only referring to the sale of paintings and works on paper.

Actually, Bonhams didn’t completely bomb, craftily sending out a post-sale press release with all sorts of tales of dering-do. To (sort of) quote: “Flight – In memory of Boris Sveshnikov by Oleg Vasiliev), achieving £150,250 against a pre-sale estimate of £30,000-50,000 is ‘enticing’, ‘serene’ yet ‘powerful’, an advertising slogan straight from the School of Chanel, All Spice and Hai Karate – ‘it is no wonder this work soared in the saleroom.” 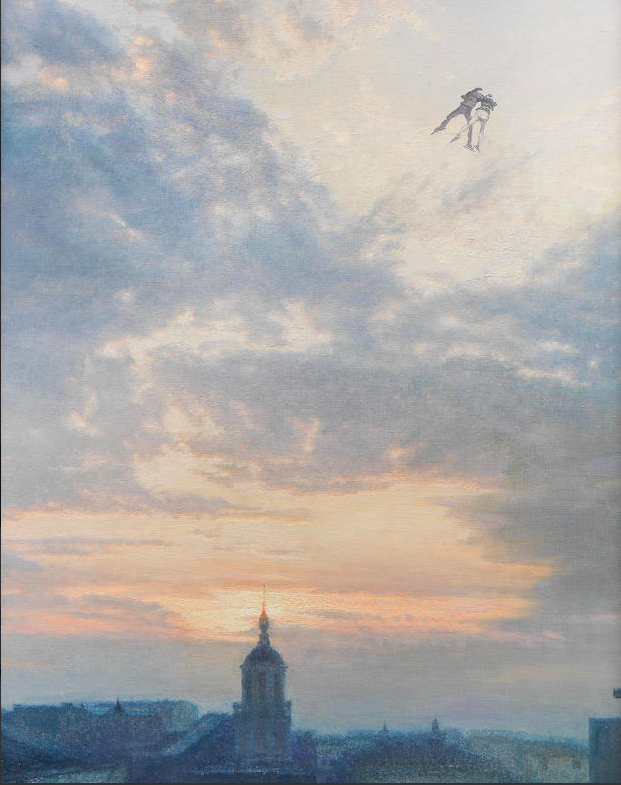 Soared in the Saleroom? Galvanised by the Gavel? Hitched High by Hyperbole? Bonhams sold a Bogdanov Belsky of a Boy Busking on a Balalaika. For 100 grand. Blinking, Bleeding, Befuddling, Bollocks.

Christies Concurrent Crash Coincided with Chaos – under 50% of pictures selling and only Volkov, thank you Lord for introducing me to that brilliant artist and charming family, doing really well. And Roubaud. And a godawful Korovin of someone sitting on a bench on, rather than in, Ecstasy. Roerich rocked, doesn’t he always, and Gloria Swanson got snapped up before she, spoiler alert, put a bullet in poor Bill Holden’s back. 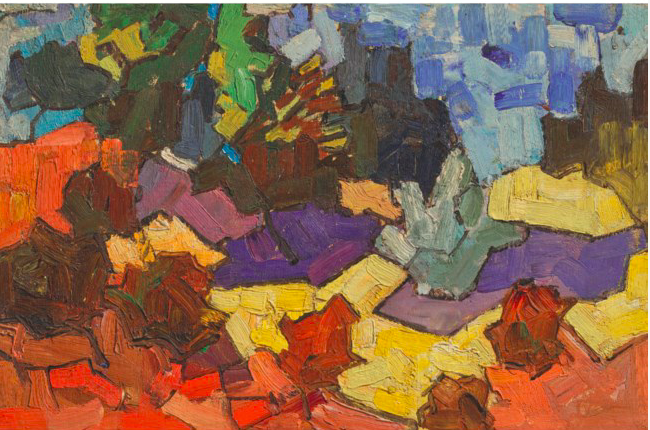 Sainted Sotheby’s (also) Soared Sensationally Sometimes Sweetly but, dear God, when will an auction house come up with a site that is ‘user-friendly’? Sotheby’s have, probably after ‘local consultation’ (one of those mealy-mouthed phrases that makes you want to reach for an emetic), have a site that, if you make the mistake of registering, is now unfathomable.

Yet again, Russian Art Week proved the maxim that, ‘no-one ever made a fortune by over-estimating the taste of the Russian People’. Sychkov? It’s Helen Allingham in Slavic National Dress FFS! Kharlamov is, as many of you know, my bete noir. Great God that boy is a bad artist but our Rooskie buddies just lap him up. The picture ‘Friends’, which has just set someone back, they MUST have had a taste transplant, 88 grand is, to quote Iggy Pop, a dog. Yup, an art world adage, a picture that’s so bad it barks. ‘Girl Crocheting’, all yours for 182k is just as bad and as for Konstantin Youboreovich Kakovsky! Someone, who clearly needs psychiatric help, shelled out 252,000 for this howler at Sotbiz. Why? Come and see me! I can convert you! Great Art exists! You want your friends thinking your taste is up there with My Little Pony? I can purify you! Save yourselves, before its too late! Actually, it is too late (see *)

Mercifully, a tolerable Sudiekin set design did OK whilst a decent Konchalovsky Still Life literally flew off the walls for over a million. The only painting which came into the, ‘Harrods v Primark’ category, Maria Vasilieva’s, blinking marvellous ‘Femme a l’eventail noir’, sold for nearly double its estimate thus greatly restoring my reputation as a tipster. 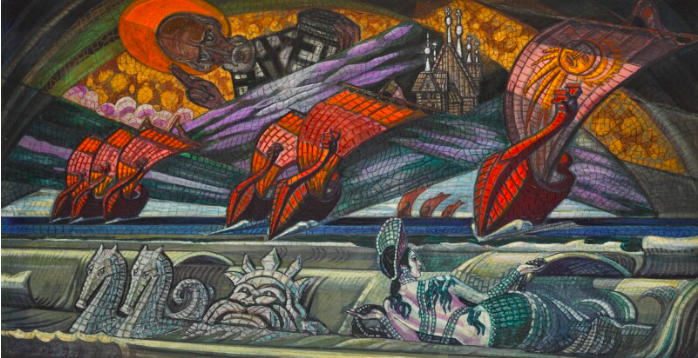 Dobuzhinsky’s ‘Poles in Galicia’, the Hound from Hell, the Cerberus of RAW lots also failed to find a buyer. There is a God.

All those Soviet soft-landscape detritus sold pretty well. Shcherbakov, Glazunov, Aralov but these proved a mere hors d’oeuvres to the main event. The Non-conformists.

With a huge raspberry blown in the direction of those who said I was talking out of my second-favourite organ, these babies sure came in to roost at RAW with the 30th November sale the warm-up for the 1st December. The support act, if you will. Like Van Halen when they blew Sabbath off stage***, UFO in support of Rush. The Krankies at Dundee Gaumont.

With 70 out of 87 lots selling and nearly £6m in takings, Sotheby’s sale devoted solely to non-conformists went just fine. Tselkov’s ‘Boy with Balloons’, available in Moscow a year or two earlier for $150,000 US sold for £570,000, Rabin’s ‘Socialist City’, something Mr Khan intends to do with London, flipped out of the blini-pan for £100,000 and the Bulatov, a masterpiece, hit a million. Actually, it went for £1,007,000 but that would require a James Bond gag and buffet humour is way below me****. 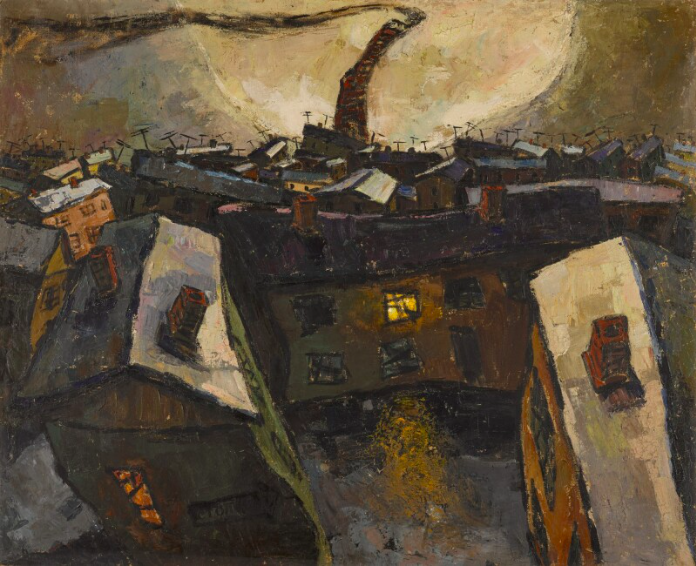 And now to the Golden Arches.

How the hell do they do it?

They, too, had a massive success with their non-conformists, to say nothing of the sale of the Levitsky of Catherine the Great, now speeding its way to Big Boy’s Palace, the Semiradsky (yes, I did indeed ask in a previous article what was a semi-radsky, so no need to mention that again, eh?) and a Murashko whom, for the uninitiated, was a top-drawer Ukrainian Impressionist, rather like Volodymr Zelensky. Or Rory Bremner. This little baby went for £312,000. MacDougall’s have a policy, sell as many lots as possible, damn the torpedoes if they don’t sell, and rake in the profits. I’m lovin’ it. 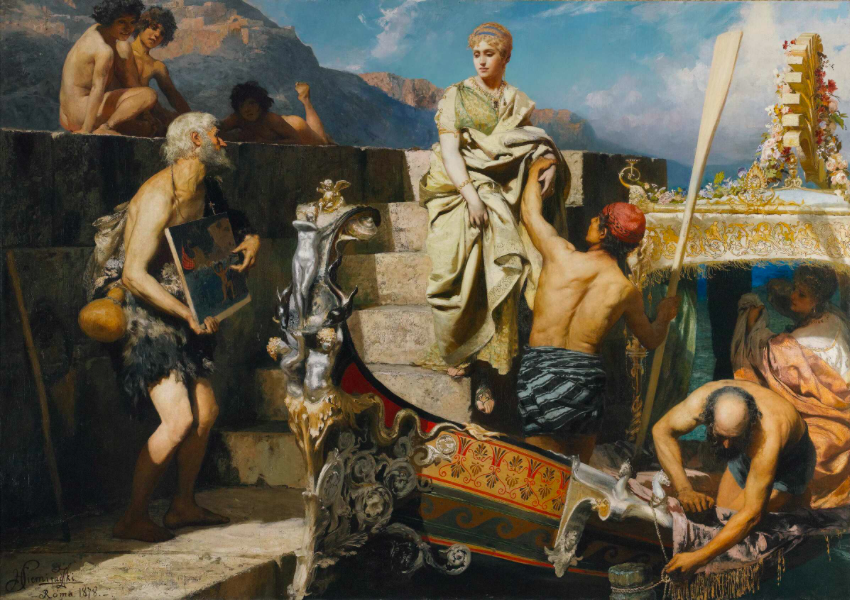 To quote David Bowie, inspiration have I none, I’m off to shoot Vaccines in Veins Veritably Voluminous in Veracity.

Vax up Sugars, the Bogeyman is coming.

* for clarity, I wish to state that this refers to the Roman numeral 11 and not the Chinese, may His Name be Praised Forever, President of the same name.

** I have never, knowingly, shopped in such an emporium. Off my tits, possibly.

*** any innuendo is utterly and completely without intention. There is no evidence of the mighty Halen doing anything to Ozzy and his chums either on, or off, stage.

**** take Viagra – it won’t make you James Bond, but it will make you Roger Moore.

No children or dolphins were harmed in the writing of this article, the proceeds of which go to charity.