Helsinki Festival 2018 that took place in the end of summer 2018 included a wide range of top class classical concerts, theatre and dance performances and was one of the events that attracted lots of visitors, international artists and Finnish audiences alike. It was complemented by installations and exhibitions in main museums of the city and indeed made Helsinki the focal point of cultural buzz. 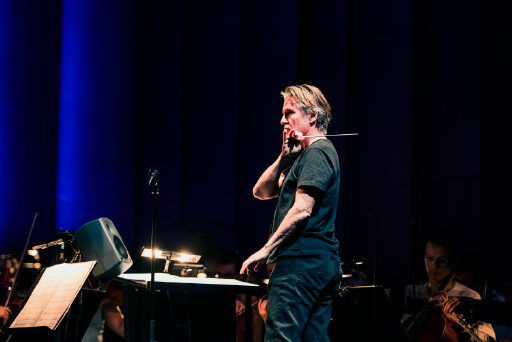 The highlights of its classical programme were the visit of Freiburg Baroque Orchestra, Mahler’s Eighth Symphony (extraordinary in its scale and efforts needed for its realization) conducted by Hannu Lintu and featuring Finland’s finest soloists (including Camilla Nylund, Anu Komsi, Helena Juntunen and Lilli Paasikivi) lined up on stage along with representatives of best Finnish choirs and Finnish Radio Symphony Orchestra. It also had a wonderful programme of music mixed with dance where the renowned Tero Saarinen Company presented its choreographically complex Zimmermann Trio based on the music of Bernd Alois Zimmermann, with Susanna Mälkki conducting Helsinki Philharmonic Orchestra. The Festival indeed showcased its most famous classical musicians, and it started with the concert that celebrated Finland’s probably most well-known international star – Esa-Pekka Salonen.

It was quite a revelation to see the level at which the country celebrates Esa-Pekka Salonen’s 60thbirthday. His birth date is actually 30thJune and was already marked by three consequtive celebratory concerts in Europe: Schoenberg’s magnificent, rarely heard Gurrelieder were hand-picked by Salonen himself for this occasion and were performed twice – in London and Paris, while Ravello Festival opened its programme with another birthday celebration for the artist. However, Finnish concert was a special one, and was the occasion to celebrate his Jubilee in his own country, among his long-time fans and supporters and with long-term collaborators and colleagues. The tickets were sold out in a few days, and the event also became a highly sought-for occasion. It proceeded in a beautiful new building of Finnish National Opera near the lake in the centre of Helsinki and was named the event of the year, being streamed online and broadcast on Yle TV, increasing its audiences to several millions in Finland and even more in other countries. Considering the scale of the event and its transmission to international audiences, it is a pity though that English subtitles were not introduced neither on stage nor in the broadcast, making it slightly difficult for international music critics to get their bearings amongst many witty Finnish jokes and comments exchanged between the host of the evening, a singer and composer Paula Vesala and Esa-Pekka Salonen himself during the evening. However, the atmosphere was radiant and sparkling from the very beginning, when beautifully dressed men and women starting to fill the hall of the National Opera. It continued to be so till the very late hours of the night, as an afterparty with two young bands Tölölab and Elifantree performing their own music and inviting young musicians to play Salonen’s solo pieces was also part of this wonderful, symbolic and historical event. 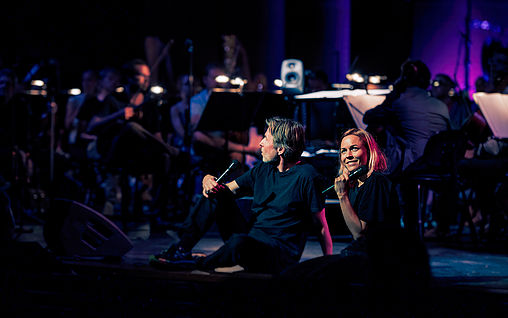 The concert featured a refined programme curated by Salonen himself where he chose a very suprising variety of pieces for himself to conduct and invited several other friends (including Paula Vesala, conductor Alan Gilbert and a collective Korvat Auki that was founded by Salonen and friends several decades ago) to participate in the evening with their own choices of musical material. It also involved many semi-improvised discussions between its host Paula Vesala and Salonen that were funny and sometimes even interactive, as audiences were invited to sing along at certain moments. Due to such format it felt indeed like an intimate birthday evening which scale was increased due to many guests wishing to attend the party – and everyone was welcome. I felt that may be in countries like Finland one indeed feels more personal connections with people due to its relatively close-knit community of classical music artists and also because of the country cherishing its international stars almost like relatives of the family. In the case of Salonen one could speak of a prodigal son who had been away in Stockholm, Los Angeles and London before making plans to be actively involved in Finnish musical life, planning to conduct Debussy’s Pélleas et Mélisande in the Finnish National Opera in May 2019 and stage the whole Wagner ring through the following years.

After a symbolic countdown appearing on every wall of the magnificent opera building, the evening started with a composition Massahumu that was envisioned collectively by five young composers (Niilo Tarnanen, Touko Niemi, Matilda Seppälä, Lauri Supponen and Joel Järventausta) from the Korvat Auki collective that has renamed itself into Ears of the Blind Wall collective but kept the connection with the initial one organized by Salonen and friends (Lindberg, Saariaho) in the 1970s. That was a very extravagant piece with musicians positioned on stage and on different balconies of the building, forming rays of the sun with a conductor’s box being the centre, and texts including congratulatory phrases for Salonen posted by people around the world on various social media (Twitter, Instagram, Facebook). That was almost impossible for non-Finnish person to understand, and one just enjoyed the atmosphere of a happening, with a video of Esa-Pekka appearing like deus ex machina from the lift backstage leading to his actual appearance to finish conducting of this extravagant creation that was enhanced by videos and changes of light supervised by Thomas Freundlich. 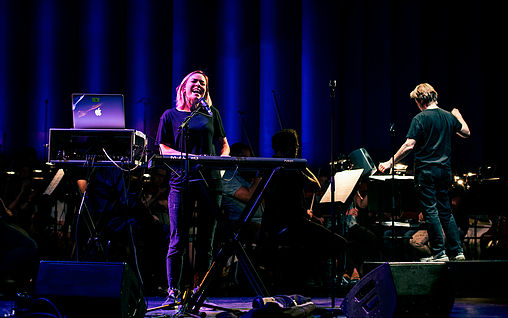 Then, after a birthday cake was presented to Salonen by Paula Vesala who was dressed in a very elegant dress resembling a Japanese kimono, an unsual piece by Heinrich Biber – Battalia (1673) was played, conducted by Salonen himself, and the musicians of Finnish National Opera orchestra performing. It is a piece beloved by Salonen – it has been performed in several of his programmes, and consists of 8 seemingly disconnected pieces that present music making as a joyous, humorous battle with some instruments seemingly running astray and sounding off tune. 16 musicians (mainly string) stand on stage, surrounding the conductor, and sometimes even tap the rhythm with their feet on the floor, with the bass using cooking paper to distort the sound. The piece represented Salonen’s attitude to music perception in general voiced by him many times – that we should not be in awe with the music we hear, but rather should digest it physically, almost like food and drink, making it part of our daily routine and not something ephemeral listened to once in a month. 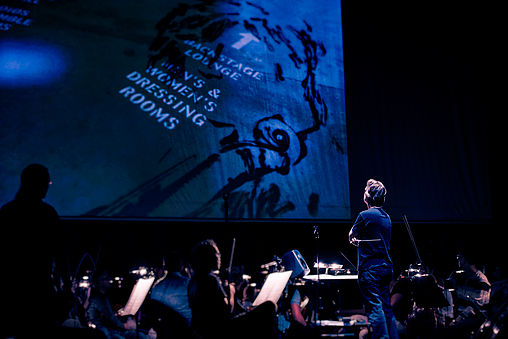 The evening continued with the theme of physicality and latent power of music influencing audiences in a real time, changing their levels of energy. After an exchange between Vesala and Salonen joking about social realism and its legacy in the modern world, a piece of Russian musical modernism was heard. It was Iron Foundry (1927) composed by Alexander Mosolov in the time when composers in Soviet Russia and abroad experimented with representing the sounds of real everyday life (including the sounds of mechanisms and factories) in music. One could recall mind-blowing Ameriques by Edgard Varèse (written between 1918 and 1921 and revised at the same time – in 1927) performed in the Barbican Hall during LA Phil residency in May 2018. In a very short piece one gets immersed in the life of a factory, hearing its mechanisms whirl, its metallic lathes at work and the Moloch of the factory life suppresing individual instrumental voices for them to become one body and sound. This piece somehow reflects Salonen’s tastes as a composer, as he even calls some parts of his compositions ‘machines’ as opposed to ‘chorales’, and likes to build his music up to dense seas of orchestral sounds driven by muscular inner sources of energy, never letting the listener rest or calm down. The first part finished with Alan Gilbert coming up to a conductor’s box to perform Suite No 1 from Ravel’s Daphnis et Chloé (1911). A long-term friend of Salonen, Alan Gilbert, while choosing his own tempi for Ravel’s masterpiece and containing the sounds in refined accuracy and tenderness, never let the evening lose its vitality and energy bursting from every musician and every sound, as though even the musical instruments themselves paid homage to the never-ending energy of Esa-Pekka Salonen.

The next part of the concert started with the solo piece by Paula Vesala herself – Olin kerran täällä (2018) which was very atmospheric, with lights dimmed and Esa-Pekka Salonen conducting his own orchestration of Vesala’s song. She was full of charisma, drawing audiences into her own world which was very complementary to that of Salonen on the evening. Then the video designer Jaakko Manninen made us meet with a new video surprise – a collage of celebrations from Esa-Pekka Salonen’s colleagues and friends whose participation marked important milestones in his career: Leila Josefowicz, Peter Sellars, Kaija Saariaho. Their faces and words were appearing gradually on the backdrop of backstage scenes, with Salonen intently listening to what they had to say about him, and audiences getting new pieces of insights about the artist. Then, following the logic of the evening, Salonen conducted his own brand new piece Pollux (2018), with its orchestral palitre reminding us of his beloved Debussy and leading us into dreamy, translucent, and still intense spheres from where one does not want to exit. Here Salonen explored new pathways opening for him as he is celebrating his 60thbirthday – that of philosophy in music, and possibility of meditation through sounds – the area still new to him as a composer, although he has been called by many colleagues a philosopher on the podium. 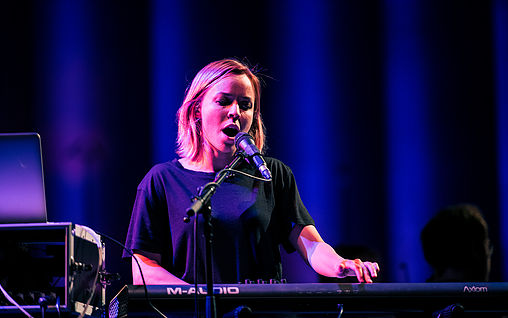 The evening finished with another Russian piece (the presence of the influence of Russia through music and history is never too far in Finland as one can feel in Helsinki) – a coronation scene from Modest Musorgski’s opera ‘Boris Godunov’ (1869) was performed by Finnish National opera choir and the renowned soloist Matti Salminen. It was interesting to a famous Russian aria about the inner fears and tribulations of Godunov during his coronation, and there was something in it that turned the evening into a different vein – that of anticipation and introspection amid the festivities. One might think of Salonen himself feeling sligthly weary amongst the celebratory events, as the innuendos and uncertainty of future are still unavoidable even for an established artist like himself. But the tune of Happy Birthday (sung in Finnish, English, Russian and many other languages) dismissed that melancholic tone, with all the soloists, the host Paula Vesala and Salonen himself appearing to take the final bow of the evening.

The wonderful event proceeded with an afterparty where Salonen’s solo piece for cello (Knock, Breath, Shine) was performed masterfully by young Senja Rummukainen, while his other piece for solo violin (Lachen verlernt) also drew attention from the public for its virtuosity. Young musicians entertained the guests who found time to stay till midnight, and one had an opportunity to talk to all the soloits and guests of the evening in a very democratic atmosphere of drinks and snacks purchased at the bar, friendly pictures made and shared, handshakes and hugs exchanged. Esa-Pekka Salonen was one of the last to leave the room, and generously encouraged young composers from Korvat Auki to continue with their endeavours and be brave and confident in creating new sounds out of silence. One hopes that the 65th and 70thbirthday of the Finnish international star in classical music will be celebrated with the same mix of democracy, familial intimacy and interactive fun and daring programme-making as it was on August 17, 2018. May be for that time a stadium could be booked to let all the admirers be part of the fun. 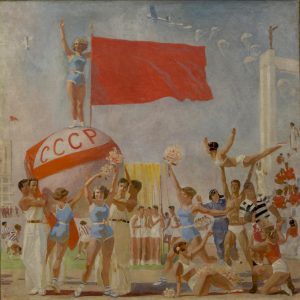