Poor Goncharova – given the attack on charges of ‘opportunism’ in this weekend’s Financial Times, to say nothing of the two tomes published by Antony Parton and Denise Bazetoux containing a large number of dubious ‘re-discovered’ works, the new Tate retrospective comes at an opportune time. In this review of her legacy one might argue that, in a sense, Goncharova never went away. Until recently the most expensive female artist at auction, she retains an originality and dynamism that the exhibition does nothing to dispel. Indeed, the show is a watershed, and thus the temptation to lapse into hyperbole must be avoided; Natalia Goncharova, as the tribute proves, is a truly great artist. 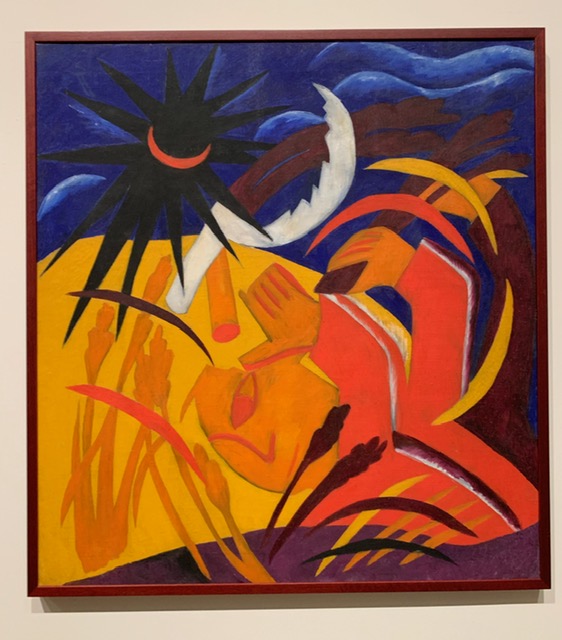 Goncharova may indeed have been a revolutionary and reactionary, but hers is a very Russian reactionism. Born in Tula province, 150 miles south of Moscow, the Slavic rituals, customs, peasant clothes and culture of her environment left a deep imprint. This is a fact not lost on the curators, who placed a peasant costume and pryalkain the first hall. Peasant lubki – woodcuts – are also shown, having featured large in her psyche, along with multi-coloured, one-dimensional primitive designs, sometimes featuring the fantastic beasts of Russian folklore. The whole Slavic philosophy was one that Goncharova trumpeted loud and proud prior to her forced emigration in 1914. 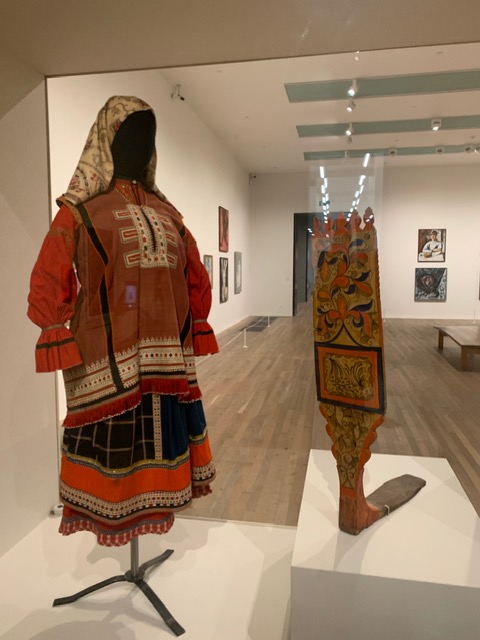 Indeed, virtually all her output pre-Paris is a riot of colour, experimentation and creativity. No two pictures look alike and the Tate, to their eternal credit, have assembled works from as far afield as Omsk and Serpukhov. I found the seven-panelled polyptych (rumour has it that the missing two parts are in Arthur Daley’s lock-up in Cologne) quite devastating in effect. Choosing a colour scheme of brilliant yellows, oranges and reds, Goncharova surpasses Fauvism; this is a far more brash version, the minimal brushstrokes creating a dynamism absent from her French contemporaries. But this is precisely what makes Goncharova such an exciting artist. 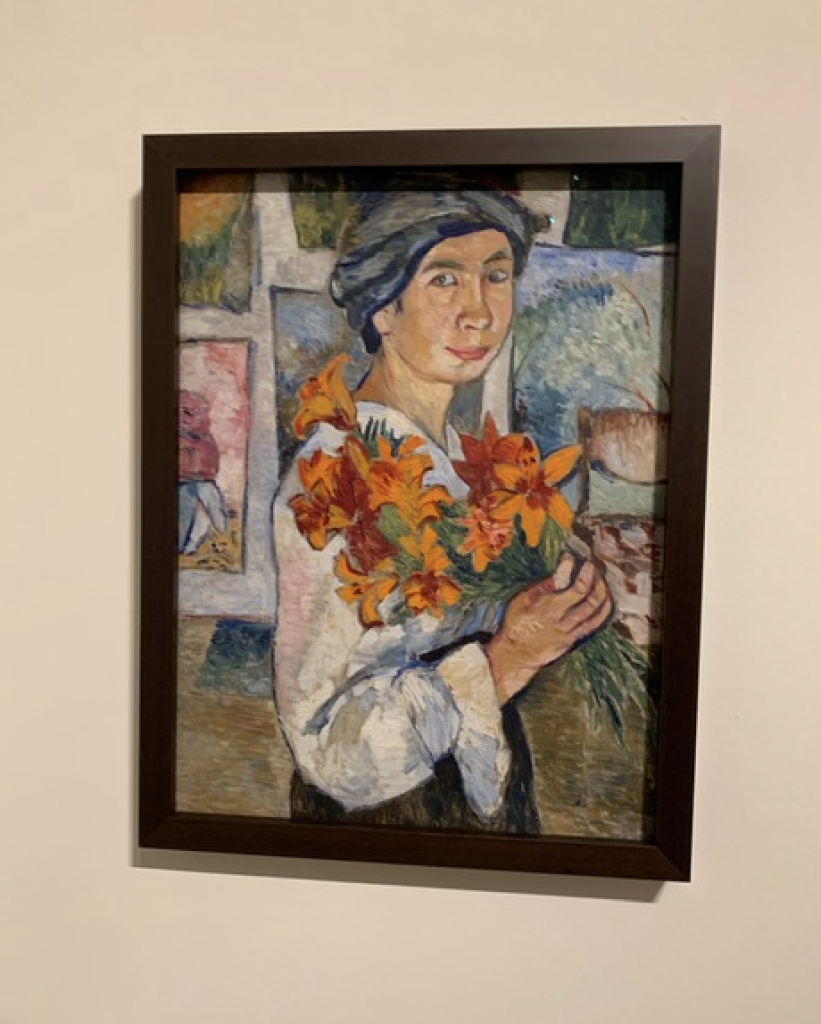 Picking Apples, one of the first paintings in the show, is a masterpiece. Slightly reminiscent of Primitivist-period Malevich but, in my opinion, a great deal better, the painting is a monumental study of two figures. Indeed, the work of her entire ‘peasant’ cycle is spectacular. One wonders how such genius could be surpassed but, with pre-1915 Goncharova, anything is possible. 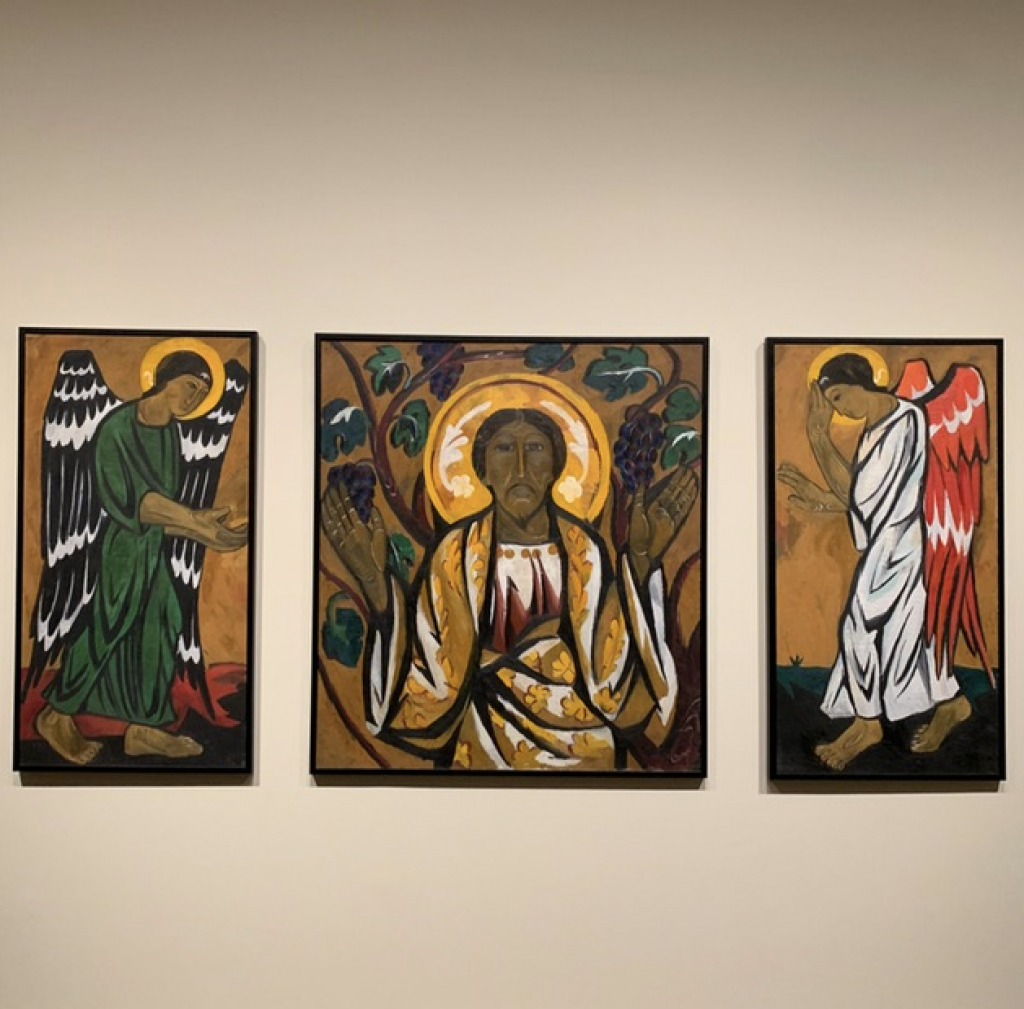 The Evangelists, removed from the walls by Tsarist censors in 1913, seems a mild representation today, but Orthodox dogma was, and is, inflexible. Overall, I found Goncharova’s religious paintings sympathetic. They don’t seem to be attacks on the Russian Church but her own interpretations, albeit unusual. The Christ the Saviour triptych is a modern-day icon; the angels flanking Christ gesture meekly, with outsized hands, heads inclined. They are celebrating culture, not denying it. 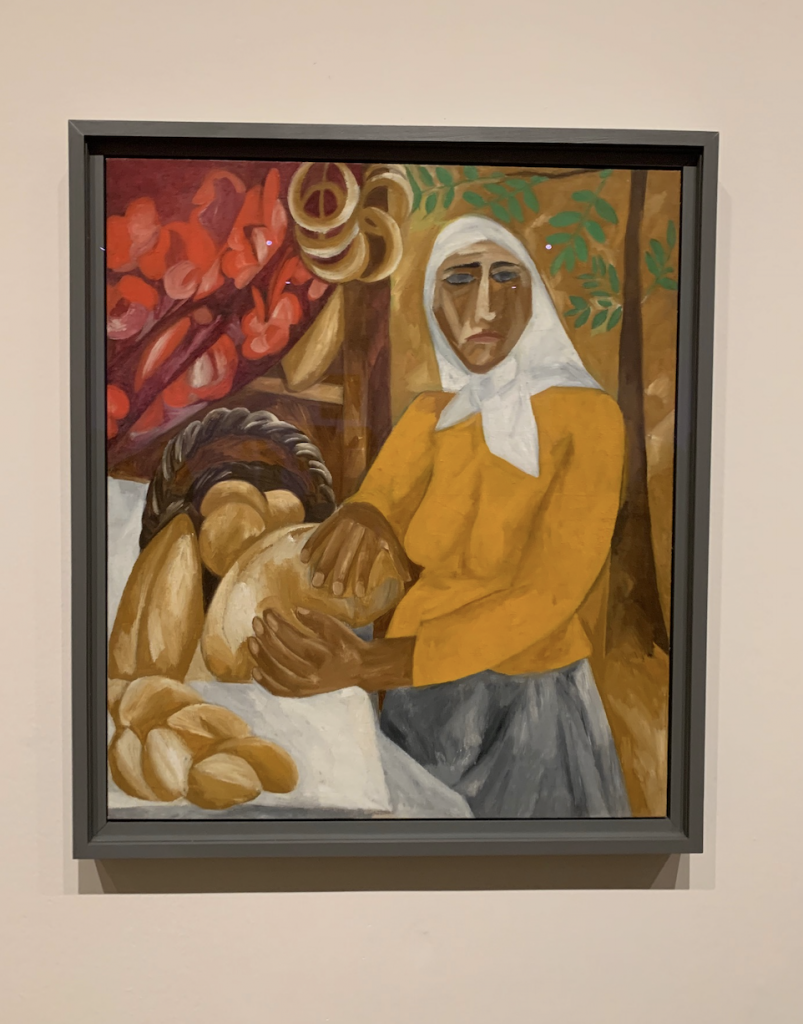 Goncharova was a revolutionary. Her painted face and semi-clad torso clutched in the arms of her paramour, Mikhail Larionov, is an internationally recognisable image and was utterly scandalous in socially conservative Tsarist Russia. Perhaps Goncharova’s gender does lend one to greater admiration of her work, given the longstanding struggle of the female cause east of Warsaw. 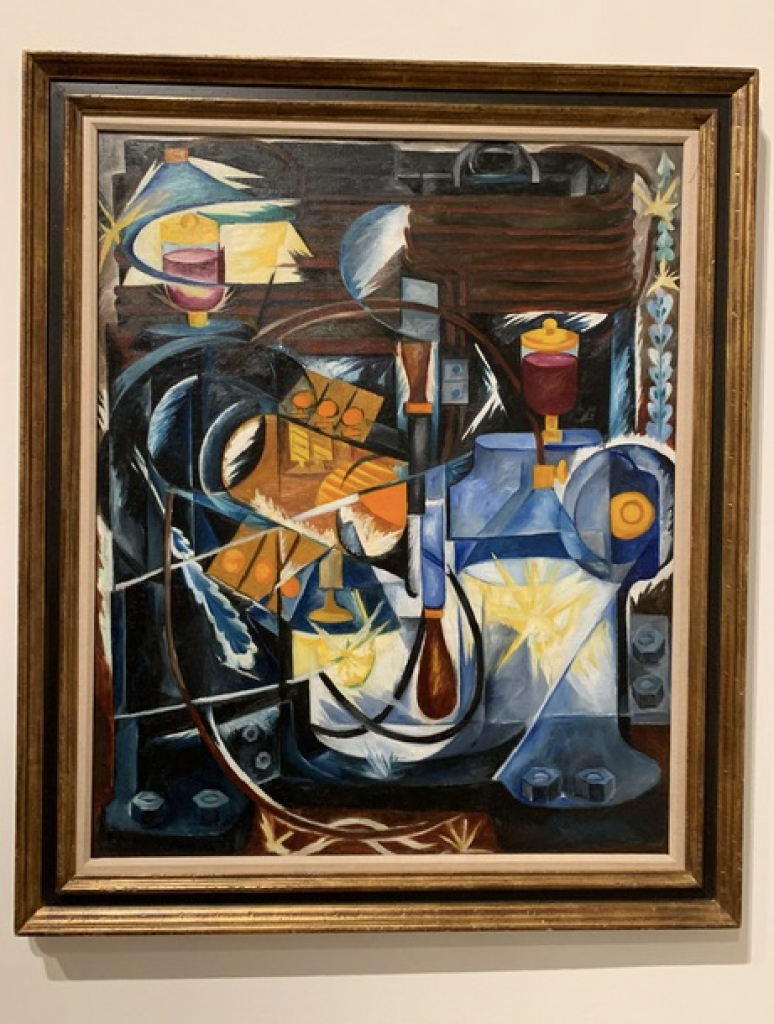 The exhibition could have shown a better selection of her theatrical works, with most chosen from her weaker Paris period. There were likewise insufficient Rayonist paintings, but these are small quibbles in an ocean of masterpieces.

Take, for example, the Mystical Images of Warseries of lithographs. Seeing the set as a whole, they do fizz with imagination, reminiscent of Manet’s Death of Emperor Maximillianand Goya’s The Firing Squadin the soldiers, accompanied by a heavenly choir, viewed from behind as they march to war. Aeroplanes and angels intertwine in another lithograph from the series, a patriotic triptych of French, Russian and British symbols. 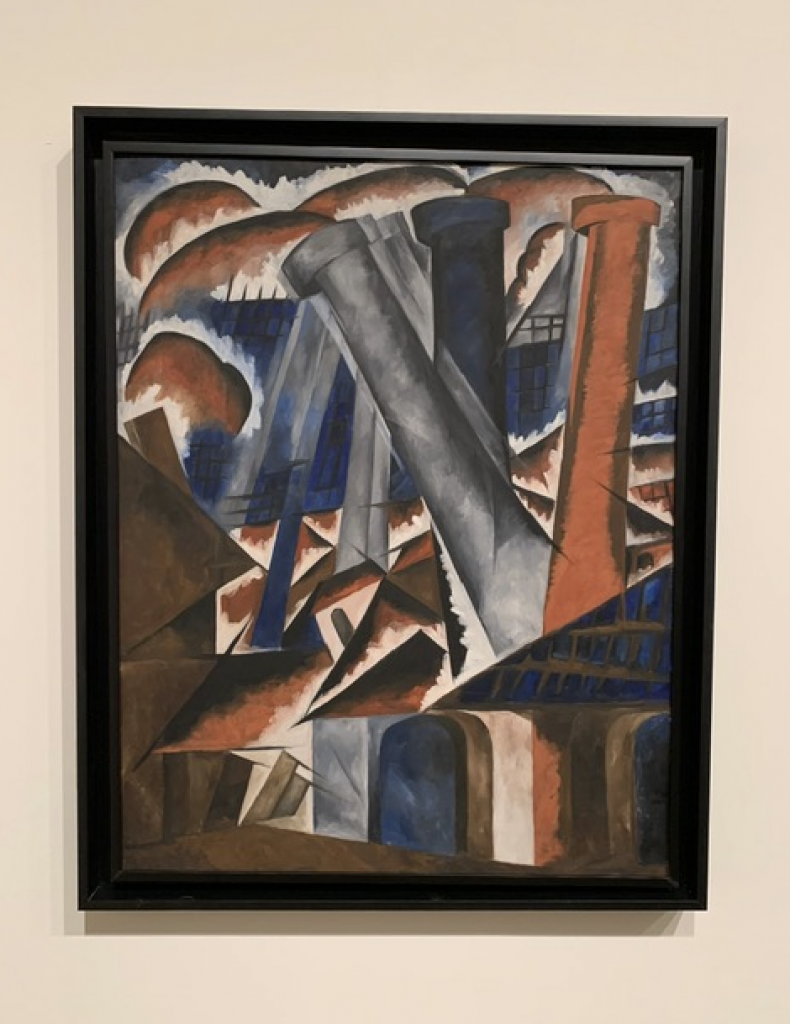 The Futurist paintings are no less interesting. Goncharova appears to have welcomed industrialization, at least on canvas – Factoryis a falling chimney, Cyclista pre-Balla study in movement and energy, Airplane Over Town an almost comic supplanting of one new invention on another. But it was Cyclistthat brought a lump to my throat; whilst I am loath to beat my own drum and that of my colleagues, this exhibition brought home in no uncertain terms the insult carried by the books of Antony Parton and Denise Bazetoux. The latter managed to publish seven versions of Cyclist, whilst Dr Parton dug up another Wrestlers in his book. Did they really think that the ‘evil’ art world, ‘motivated by power and money’, would let these errors slip by unnoticed? As a postscript, I must mention that the sale and distribution of Parton’s book was made a criminal offence by Russian Courts in June 2016. Such is the power of Natalia Goncharova. At last, the Tate retrospective puts her firmly in the highest tier of world artists, regardless of cultural origin or gender.