EBULLIENT AUSTRIAN CULTURAL ATTACHÉ Simon Mraz left his artistic footprints all over Moscow and its suburbs this Autumn with a smorgasbord exhibition-programme collectively entitled Na Rayone (‘Beyond The Centre’).

Mraz, 42, studied History of Art at Vienna University and the Sorbonne before opening the Milan branch of auction juggernaut Dorotheum, then invading Moscow in 2009. Previous forays into Russian contemporary have taken him to Krasnoyarsk, Murmansk (on an ice-breaker) and Birobidzhan, capital of the Jewish Autonomous Region in Dalny Vostok. In 2015 he curated one of Moscow’s stand-out shows of recent years: Nadezhda (‘Hope’), starring Mish-Mash and Dmitry Kawarga at the grimy Trekhgornaya Manufaktura near Metro Ulitsa 1905 Goda.

Mraz defines Na Rayone, his latest venture, as ‘an artistic exploration of Moscow beyond the city centre’ involving ‘Workers Districts, Green Districts, Dormitory Districts and New Districts… where the culture of today and tomorrow is defined.’ Most shows opened mid-October, some running into November, with over 40 artists involved. A Part II is slated for next April.

The Autumn programme began, geographically at least, in the heart of Moscow – on the seventh floor of Stalin’s notorious House On The Embankment, where Mraz opens his flat to artists on a regular basis. His guest this time was German-born, Vienna-based Michèle Pagel (below right, gazing at Mraz), with a show mystifyingly entitled Polly’s Cracker that consisted of kitschy sculptures and balloons on nooses (rather than strings) said to illustrate domestic violence. 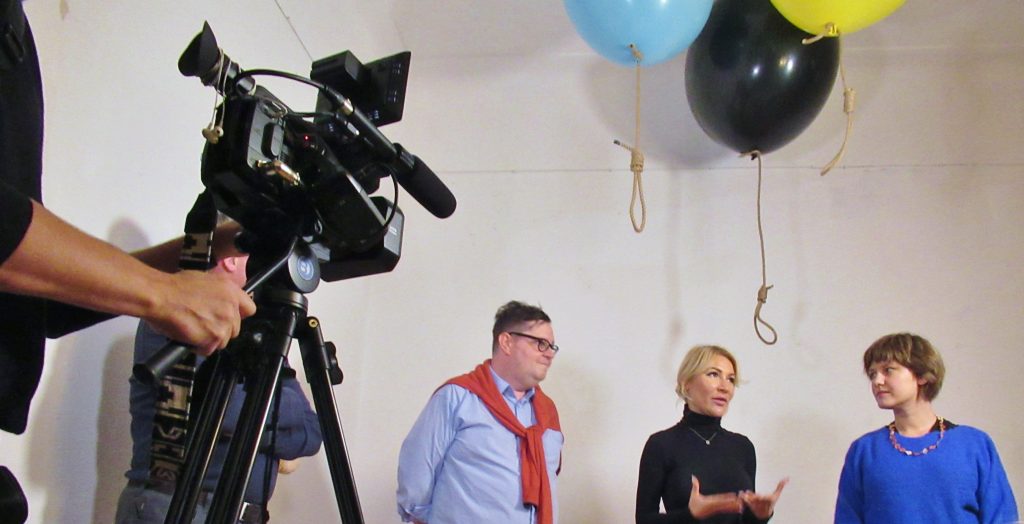 The next two Na Rayone venues were theatres east of the city centre. The small, Stalin-era Zvezda cinema hosted a film called I Am Moscow – the fruit of ‘ordinary citizens filming their everyday life,’ with anyone and everyone invited to upload videos to the website www.iamthecity.moscow for editing by the School of Documentary Cinema & Theatre. The idea was inspired by the Vienna Film Museum’s project Am Rand: Die Stadt.

Meanwhile, just across the Garden Ring, the Gogol Centre hosted a solo show by Rostov’s Pasmur Rachuiko – perhaps best known for his performances involving snails and nettles, but here represented by paintings of burka-clad females. They suffered slightly from the adjacent presence of a sombre Chelushkin masterpiece permanently installed in the theatre foyer.

Proekt Fabrika, a converted factory lurking in a side-street a stiff tram-ride up from Baumanskaya, has been a contemporary art venue for over a decade – becoming somewhat tarted-up in the process. Highlight of a hesitant show dubbed In Situ, concocted by young local curators Kristina Pestova and Anna Koslovskaya and their dog, was На Своём Месте (‘In Its Place’), a 16-page comic specially conceived for the occasion by Moscow’s top cartoonist Alexei Yorsh .

The giant ZIL Culture Centre, built in the 1930s alongside what remains of the Simonov Monastery near Avtozavodskaya, hosted a photo exhibition commissioned by the City of Vienna called Social Housing in Vienna. Although event blurb talked of ‘similarities in the social and cultural DNAs of Moscow and Vienna’ the show (below)made no attempt to illustrate them, and can have been solely of interest to architectural historians (like me) and Viennese politicians. It was, however, accompanied by a fine book of artistic photographs devoted to the aesthetic highlights of Vienna’s interwar housing boom. 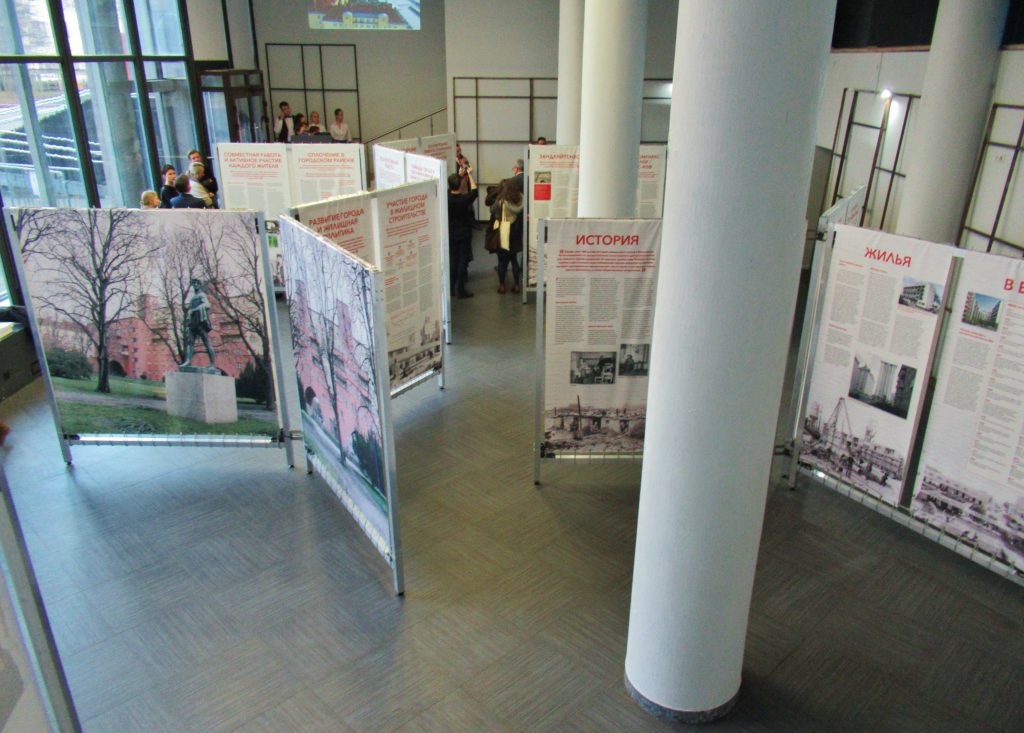 Meanwhile, beneath the extraordinary star-patterned neon strips of ZIL’s Constructivist amphitheatre, Austrian participants in Na Rayone were given a microphone and the chance to show why artists should let their works do the talking.

The penultimate venue, in the Lyublino District of south-east Moscow, was a shed full of junk known as the ‘Museum of Industrial Culture.’ Photographs of metal doors by Vienna’s Klaus Pilcher, enticingly entitled Self-Storage, fitted in admirably. 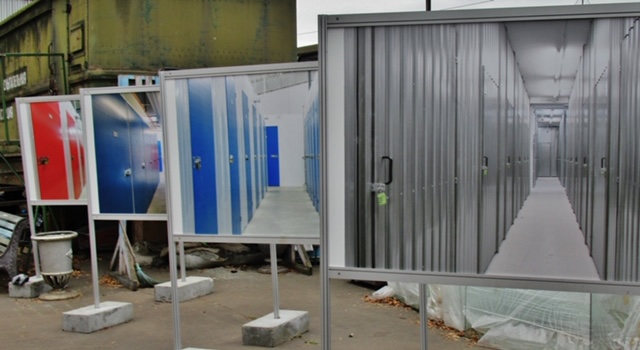 The outermost project, well beyond Moscow’s south-east limits in the new immigrant ‘micro-district’ of Novo-Molokovo (less to do with a micro-dairy than with Soviet air hero Vasily Molokov), was called Odnushka (one-room flat). It centred on a free-standing, glass-fronted estate agent’s office decorated with small-scale offerings by Russian and Austrian artists who had bravely volunteered to ‘go into residence’ a 40-minute bus-ride from the nearest Metro station. Stylized views of neighbouring buildings in colourful felt pen by Bulgarian-born Vasilena Gankovska, who works in Vienna, caught the eye. 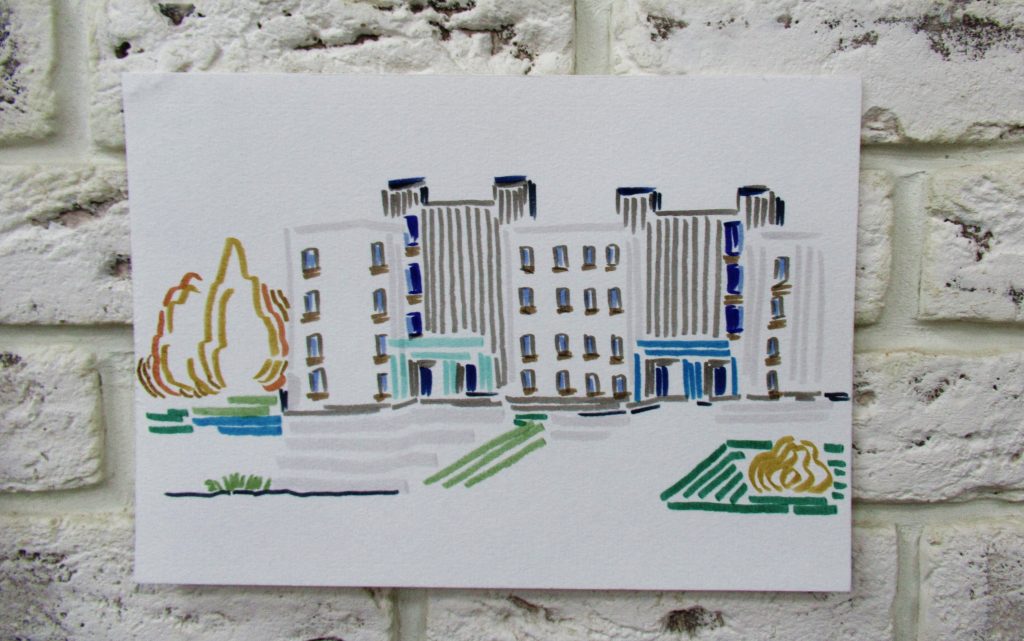 Amidst Novo-Molokovo’s gaily coloured tower-blocks the windows of what hopefully, one day, will be ground-floor shops provided a bare concrete showcase for eccentric sculptures, with locals summoned to the micro-district library to vote for their favourite (see below). ‘The idea’ explained Mraz ‘is not just to drop in an artwork, but to integrate the inhabitants of the district into the process of selection from the very beginning. Contemporary Art in public space is still very rare in Russia, but that should not be a barrier.’

No worries. He’ll be back.