Hygiene was an important signifier in 1920s Russia. Cleanliness developed into a political statement that extended from domestic maintenance to leisure choices and revealed gender, ethnic, and class prejudices. Dirt denoted the past and poor politics; health and cleanliness signified mental acuity, political orthodoxy, and modernity.  — Tricia Starks, Body Soviet: Propaganda, Hygiene, and the Revolutionary State, 2008

Kitty Brandon-James: In my first months in Moscow in 2013, I heard a story about a man beaten as he crossed a street for having holes in the knees of his trousers. I was told, quite solemnly,  that even if you have only one pair of trousers, it is up to you to keep them clean –  for you represent more than yourself in public spaces – you represent a collective. I arrived in Russia naive, energetic, and ignorant of the language, and internalised this tale with gusto, adding it to the interpretative toolbox of a mute illiterate, to gauge from nods and grunts of ladies in the Moscow metro tunnels who sold fruit and veg if my manicures met muster. I was quite regularly shouted at by strangers for the latest piece of muck on my collar, and assumed with some relish, that this was my comeuppance for breaking a rule I wasn’t sure I hadn’t invented. Can you reflect on this: what is hygiene in the contemporary situation? Is it a form of biopower, reflective of a wider body politic? Or is it just nice to smell nice?

Anya Mokhova: I guess in the current situation, when we are very much dependent on the politics of the worldwide brands, hygiene becomes a luxury again. Of course, such items as perfume, hair and body products from top brands have always been an expensive crave to see on one’s bathroom shelf and feel beautiful and polished about oneself, however in the last month even everyday basic drugstore hygiene items are becoming less affordable. Many worldwide brands left the shelves in Russia. I understand why, of course. But we could  say, now it is a form of body politic.

Kitty Brandon-James: In the sculpture we are discussing, Ablution, you cast your own mouth out of soap, parted open, in imitation of Gian Lorenzo Bernini’s sculpture of Saint Teresa in Ecstasy, which you invite your audiences to wash their hands on. It makes a provocative statement conjuring multiple meanings – sexuality, religiosity, iconography, hygiene, purity, and ways of knowing. Saint Teresa of Avila communicated with God, not through words, but through a ‘spiritual marriage’ of sensual intimacy, and this is theatrically portrayed in Bernini’s sculpture, housed in Rome’s Santa Maria della Vittoria Cornaro chapel, where Saint Teresa is carved into a state of ecstasy, pierced by the golden arrow of an angel. Why did you choose to cast the mouth specifically?

Anya Mokhova: There was something intriguing about the Saint Teresa story representation. I was thinking, would it give the impression it gives with her mouth shut? The thought it leads me to is that the open mouth is about acceptance or taking something in. In this work by Bernini for me it is about accepting something celestial and intangible, while in real life a female mouth is something corporeal, we taste food and speak with and at the same time a representation of female sexuality. Engaging with this part of the body in any way creates a context that breaks boundaries between two people, both physical and emotional. 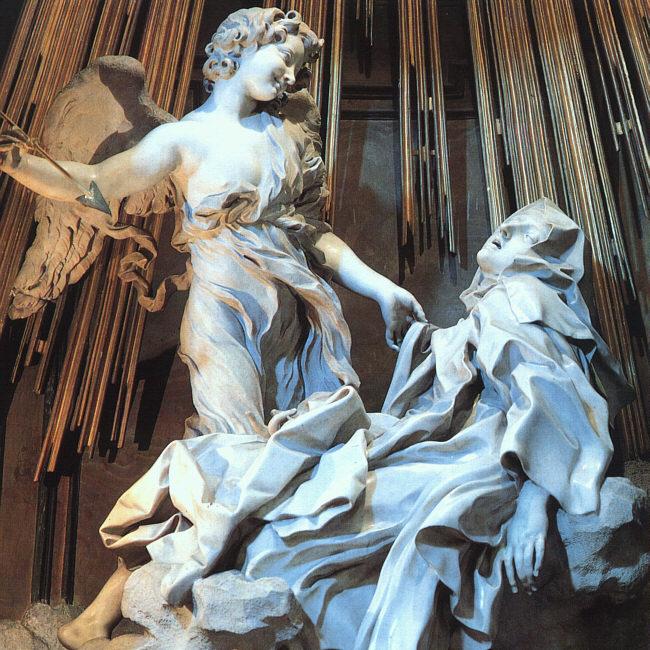 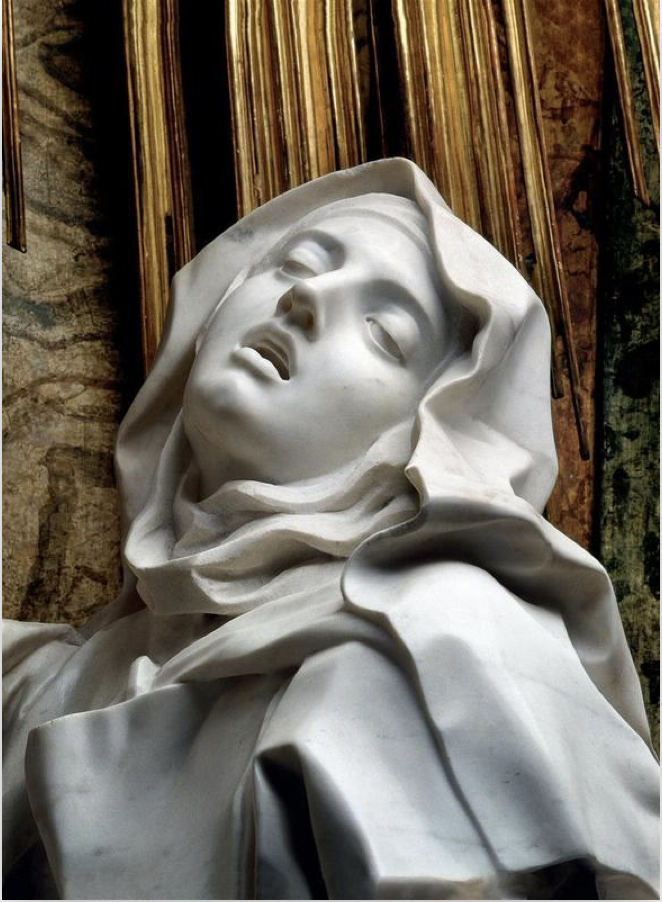 Kitty Brandon-James: What about materials: the melding of spiritual and sexual in white marble is one thing, and in soap it is another. It begs to be tactile, but it is destroyed by tactility. Why did you choose soap as a material for your sculpture?

Anya Mokhova: The choice of materials is generally significant for my practice, as I feel they tell a story of their own. Firstly, as the sculpture is created through casting of my own face and mouth, it is very detailed with all of the pores and tiny scars and wrinkles. However, when it is being touched by hand with water by the visitors, the identity is being washed away, and it becomes a more general representation of a female mouth. I think it was important that through this process it takes us back to classical sculpture as there are never any particular imprints of a particular person, it is always more of a general representation of a story spoken about through a three-dimensional representation of a female ‘hero’. Another thing important for my narrative in using soap is that it has been a tool to make a female body clean, generally attractive and accepted, and at the same time it is about self-care. 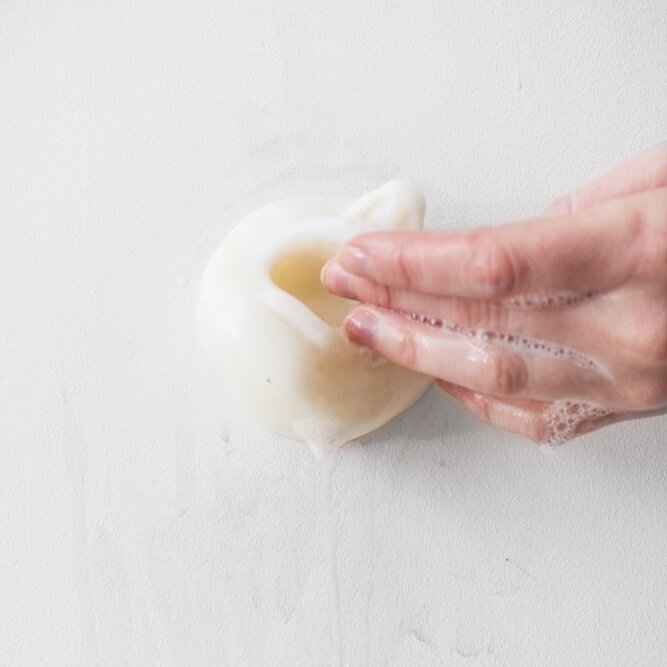 Kitty Brandon-James: To move onto subject matter, Saint Teresa has become a bit of a feminist and queer icon. Bernini’s sculpture, created between 1647–1652, as a piece of Catholic propaganda deflecting against Martin Luther and the reformers’ accusations of sexual malpractice amongst monks and priests, has inspired comment from Marquis de Sade, and Jacques Lacan, who both commented on her sexuality, and Saint Teresa herself gained detailed attention from Gertrude Stein in Four Saints in Three Acts, and Vita Sackville-West, who wrote her biography.

By washing hands on the soapy mouth of Ablution, (as you invite your audiences to do), the mouth ebbs away, erased into a soap stump. It is tempting to frame this as a visual expression of what is happening to freedoms of speech, and freedoms of sexuality world over as we become more binary in our thinking; as we cancel each other, and erase nuance. We could read the sculptures through a post-truth lens, or a new materialist lens, a queer lens, or a feminist lens. How would you like your work to be read?

Anya Mokhova: It is important for me to see how visitors engage with my works in their own way, referring to their own tactile impressions and fantasies, and materials of my choice suggest that there is always more than vision taking part in the process of interaction. I find it fantastic in my works that there is no need to have a thorough understanding of art theory to experience the emotions through interacting with them. It is a pretty straight forward sensual process, which then could be thought about and discussed. It is very much about the moment. I realised it quite recently, that sometimes it is great to let the visitors start with their own emotions and feelings rather than telling them first what the work is about. 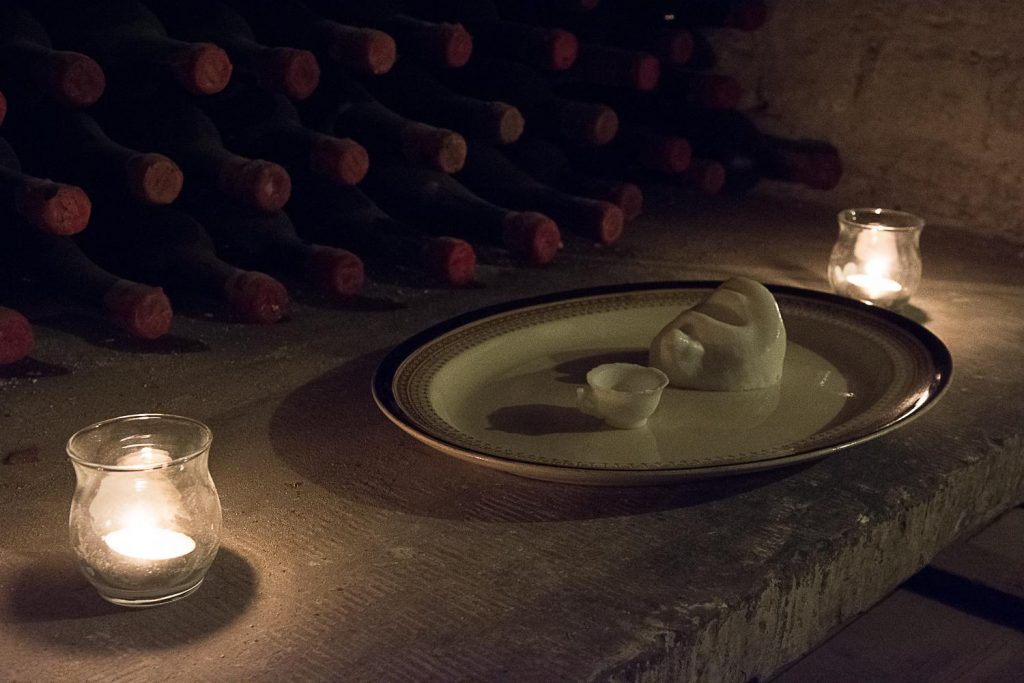 Ablution at the exhibition the Depths of Reflection. Soap. 2017

Kitty Brandon-James: Before COVID, what seemed striking about your work, was an invitation for audiences to touch a sculpture that invariably would be destroyed by their touch. It’s so different from Bernin’s sculpture which captures a fleeting moment (of Saint Teresa’s ecstasy) in perpetuity, whereas yours is like a self-destructive ode to invisible labour. (I am reminded of my grandmother’s oft repeated adage that cleaning is never seen unless it’s not done). Where is the work? Is it in the experience of touching the soap sculpture? In the soap itself?

Anya Mokhova: For me it is about the experience of engaging with meanings through touch. And it is interesting for me sometimes to make it a reverse way, for example, in the ‘Sweet Sound of Love’ I suggested that visitors engage with hands cast in sweet milk jelly with their mouths. I guess, the meaning is not only in the soap, which now has many more layers of ideas behind it, like social control, but also in the timeless stories the image of mouth brings to the sculptures, whether it is a cast or in a physical state. 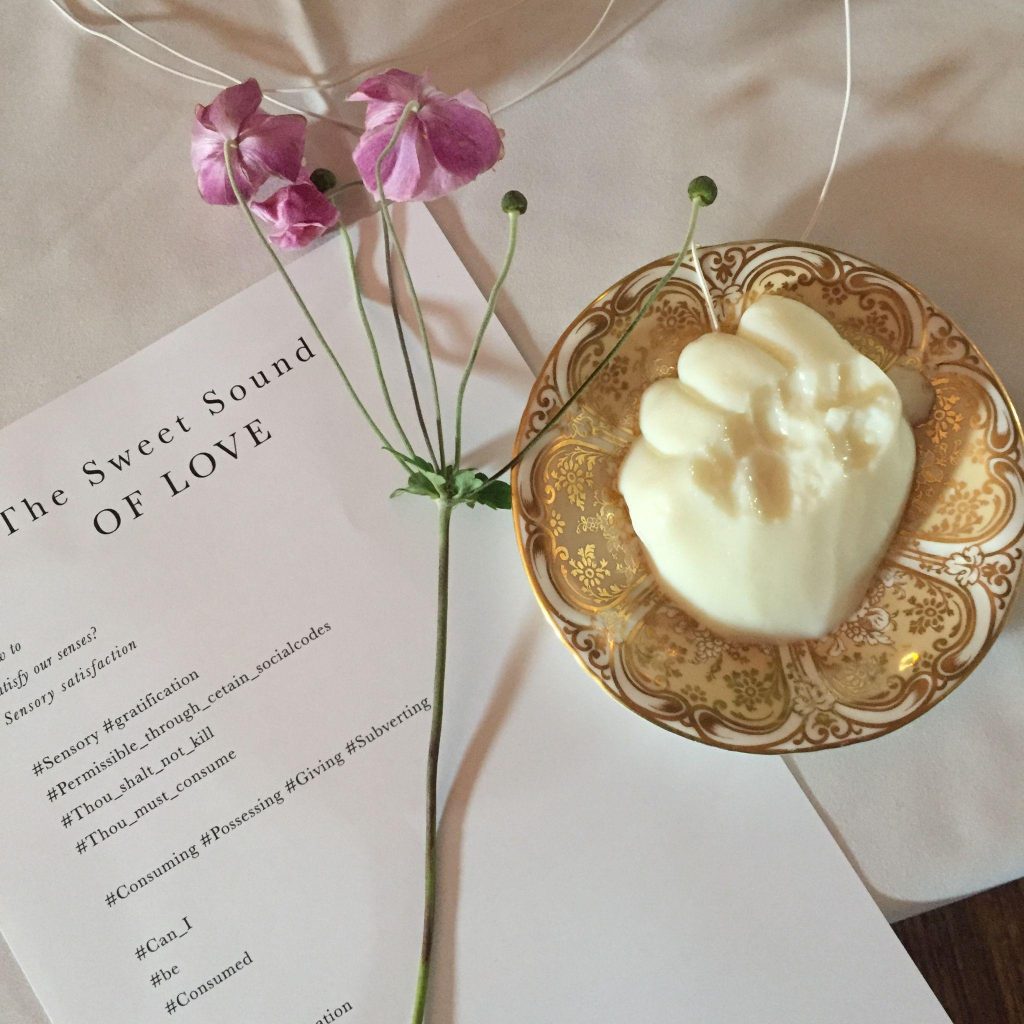 While COVID-increased communication through screens, emphasised a look, but don’t touch mentality, between 2020 – 2022 soap was one of the few things we were actively encouraged to touch. I had hoped the market might cater to mass tactile deprivation with public scratching posts, (maybe to some extent, crazes for sourdough starter were connected to a desire to feel something). I wanted to see soap playgrounds, soap icons, and more creative soap rituals than the old anti-bac wipe down. But Ablution is not a novelty soap. Inviting the audience to touch, not just look, inverts sensory hierarchies common to art museum frameworks which prioritise sight and looking as the best means of appreciation.

In The Sweet Sound of Love (2017) Mokhova invited her audiences to literally eat abstracted female body parts such as hands, elbows and ankles without using their hands, and in doing the audience became (part of) the spectacle. In our exhibition Mozhno Poznakomitsa? (Can I Get To Know You?) (2016), she instructed participants to wash their hands on Ablution, but people were tentative about following orders, perhaps perceiving their public handwashing on Saint Teresa’s mouth as perverse – perverted, even. This was a delight to behold, as it connected erotic and libidinal possibility, with shame, sin, and purity neatly. Much is written about the all-consuming Gaze, but the multisensoriality within Mokhova’s work points to multiple other ways of objectifying, reducing, and instrumentalising bodies.

Washing hands on the mouth of Saint Teresa in Ecstasy is not a soft action – it is provocative and pointed. On the one hand Ablution is a soap – an instrument of hygiene, and ideological signifier associated with Soviet (post-Soviet, and Western) biopower, consumer society, mitigating sin, and keeping pandemic death at bay. On the other it is moulded in mimic of a saint’s open mouth – a mouth which loses detail as it is touched, transforming itself into a gooey stump, and transforming visiting publics into iconoclasts – destroyers of Art. Mokhova’s soap may sweeten little hands, but at what cost? It brutalises its users, while de-germifying them; disfigures itself, while used as designed. A post-truth soap; a bubbly auto-destructor, that mouths meaning making, while making meaning unclear. 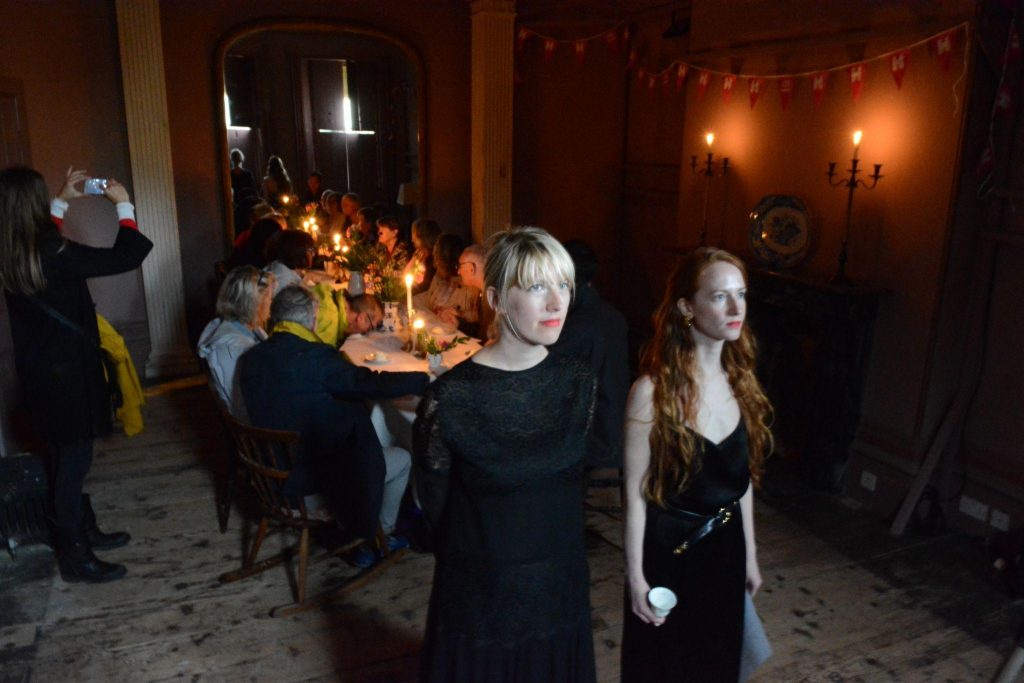 Anya Mokhova is a contemporary mixed-media artist who lives and works in Moscow. She received her MA in Fine Art from Chelsea College of Art in 2011 in London. She has also studied at Salzburg Summer Fine Arts Academy and at Royal College of Art.

Kitty Brandon-James is a researcher at The School of Slavonic and East European Studies, London. She spent half a decade living in Moscow, working as an art history lecturer, curator and writer.

Anya and Kitty have collaborative relationship, and have produced various exhibitions together, including The Sweet Sound of Love and The Depths of Reflection  for Heritage Open Days in Brighton in 2017, and Mozhno Poznakomitsa? (Can I Get to Know You?) in Moscow in 2016. This article was written via email exchange in fractured form, and is testament to connection across borders whatever the weather.

*Title taken from Michael Camille’s seminal text On Mouths and Meaning: Towards an Anti-Iconography in Medieval Art, 1993.