The State Russian Museum in St Petersburg holds the largest collection of Russian art in the world. Spread out over five palaces, including Michailovsky, Stroganov and the Summer Palace of Peter the Great, its exhibitions range from medieval icons to contemporary art. There are many gems amongst this myriad of artworks, though some of my personal favourites are from the turn of the 20th century. Influenced by Russian traditions and modern Western art, Russian artists from Arkhip Kuindzhi and Valentin Serov to Zinaida Serebryakova created their own trajectories.

In the late 19th and early 20th centuries, many Russian artists travelled to Italy and France, especially to the Cote d’Azur and Paris. There they inevitably came across Impressionist and later Expressionist art. Private galleries, such as Ivan Morozov’s and Stepan Shchukin’s, held extensive collections of Western European art, including works by Paul Cézanne and Henri Matisse. Cézanne became particularly popular among the group of artist known as the Knave of Diamonds who developed the specific style of ‘Cézannism’. Simultaneous to the penetration of European modernist traditions, a neoclassicism of explicitly Russian subjects gained interest amongst the artists. Scenery from Russian history, fairy-tales and legends were reconstructed in exaggerated, impressionistic terms. Combining the language of modernism with traditionally Russian scenes the artists created a unique moment of cultural transformation when varying styles existed side by side.

Here are a few examples of the works from the State Russian Museum collection reflecting the diversity of artistic expressions in the period:

Mikhail Nestrov, The Great Taking of the Veil, 1898.

Mikhail Nestrov, The Great Taking of the Veil, 1898.

This grand oil painting by Mikhail Nestrov shows a traditionally historical, explicitly Russian and deeply orthodox Christian narrative. The neoclassical scenery, at first sight so close to the old schools of painting, is particular to its time both in execution and in the renewed interest of representation of ‘Russian’ culture.Inspired by Pavel Melnikov-Pechersky’s novels, it depicts an Old Believers’ processions of nuns accompanying a novice to her taking of the veil. The solemn expressions of the women in clothes matte black as velvet is contrasted by the two light blue shining veils, and an oversimplified background that reminds us of those painted by Spanish and French painters of the early 20th century. 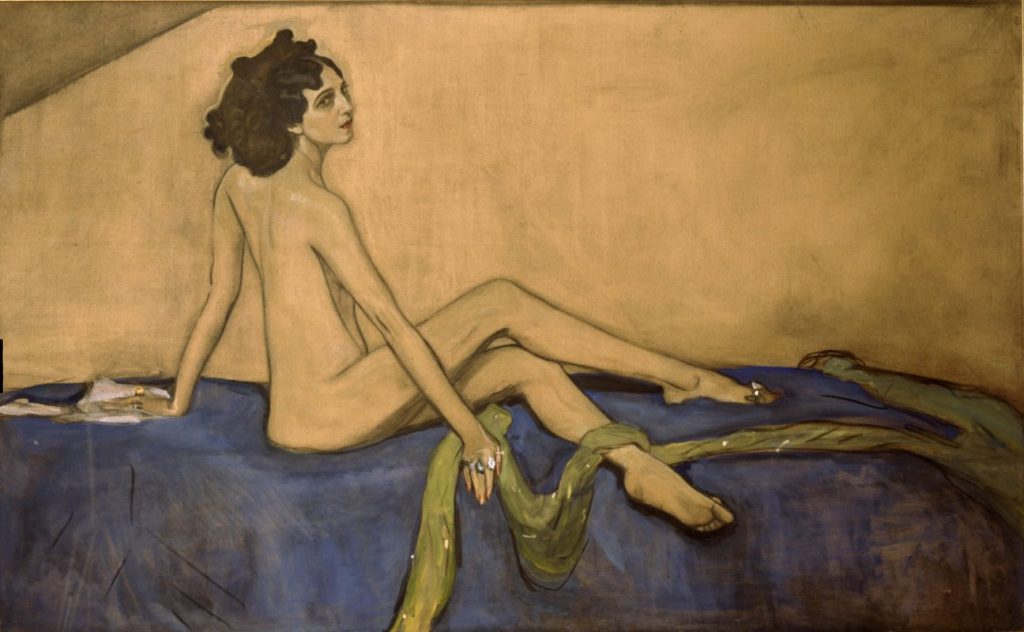 This incredible painting by Valentin Serov is the iconic work of Russian Art Nouveau. With its Modigliani-esque figure, the Russian ballerina Ida Rubinstein — famous all over Europe for her performances in Sergei Diaghilev’s Ballets Russes— draws the viewer’s attention with her fierceness and sensuality. In an interplay between the two-dimensional and the three-dimensional, she seems to be ready to walk off the bed and out of the painting. With varying level of details Serov places Rubinstein at a crossing point between the real and the surreal, at once in the world of the viewer and his own artistic imagination. 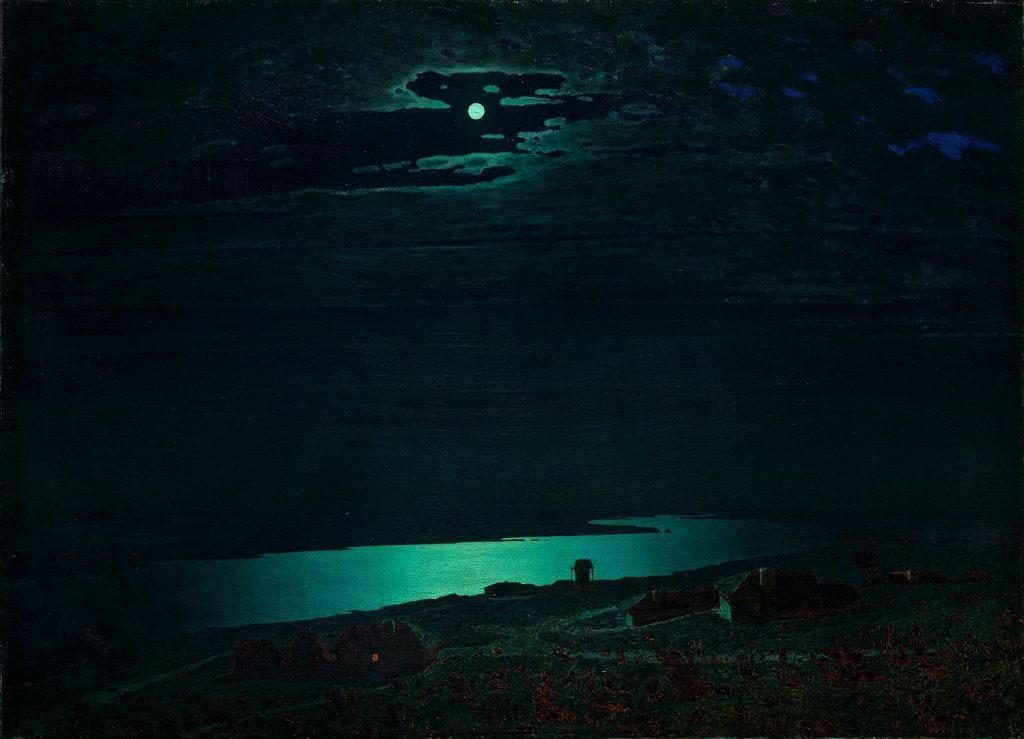 At first sight a classic neo-romantic landscape, Kuindzhi’s view of the Dnieper River is painted with a fluorescent paint that makes the moonlit river and sky shine in a dimly lit room. Painted in 1880, it is a forerunner to the colour experiments of the 1930s and 40s that continue to this day. The play of light and darkness, although of interest to artists for centuries, is exaggerated to create the atmosphere that is at once foreboding, beautiful and as mesmerising as walks under the moonlight can be.

Pyotr Konchalovsky was member of Knave of Diamonds group that took their inspiration from Cézanne. This still life is perhaps the perfect example of Cézanne’s influence evident in the colours, expressionist style, and the positioning of the objects as if they are in the constant movement. However, the objects depicted are traditionally Russian and the composition is almost directly taken from signboards of the time. By deploying an expressionist technique to create a still life that speaks of simple meals of his country, Konchalovsky establishes a dialogue between Western modernity and Slavic traditions. 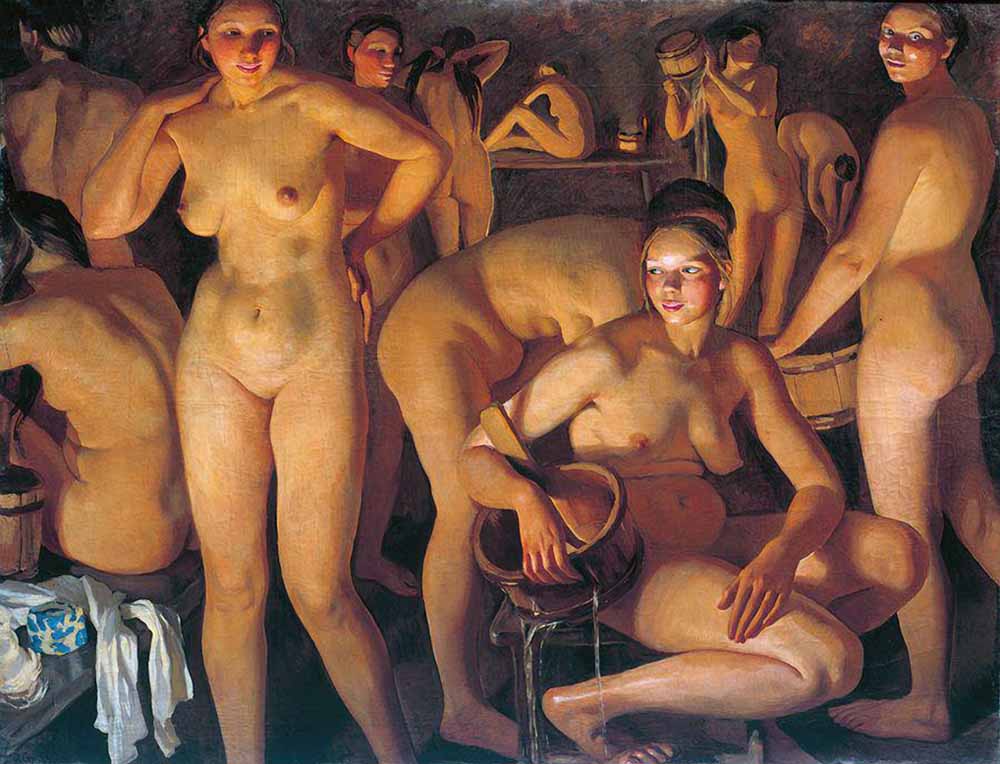 Last but not least, one of my favourite paintings of all times is Zinaida Serebryakova’s Bath House. Painted in warm colours the female bodies are both desexualised and beautiful, reflect the warmth and homeliness of the bath. Seeing the painting in person gives you the impression of being close to the fire and evokes a simple and joyous  feeling of the celebration of life. Serebryakova shifts from  very realistic representation of women at the front to the more simplified depictions of figures in the background creating the space that is at once flat and has an incredible perspective of depth. It is not just a painting of the bath house, it is the reflection of what being in a bath feels like which in my view makes it one of her best works.