Mikhail Larionov: a genius or an inferior technician?

The inevitable knees-up that followed the opening of the personal exhibition of Mikhail Larionov (1881-1964) at the Tretyakov Gallery on Tuesday gave rise to a number of questions as to the relative talents in the Larionov/Goncharova debate. This, it might be argued, is an irrelevance to any review of the personal exhibition of the artist but, such was the link between the two, that it is slightly difficult not to use comparison as the judgement benchmark.

As the only representative of a normal nation at the table, I put forward the view, something that was countered in the most forceful of terms, that this exhibition merely evidenced the fact that Larionov was an inferior artist to Goncharova, as though one can actually quantify such sweeping statements. However, hardly had I uttered the fateful words before the Charge of the Heavies Brigade (loving that cheeky little Crimean War allusion?) was let loose and rode me down in its tracks. 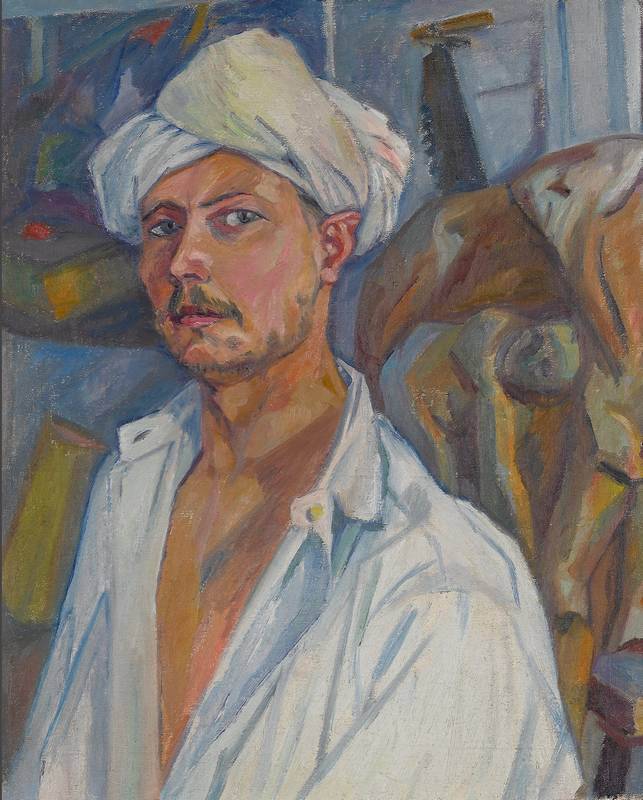 Mikhail Larionov. Self-Portrait with a Turban. 1909

Debate with Rooskies is almost as absolutist as it is with the pan-fried mega loons at Momentum for, whilst Rooskies do humour on a large scale and whilst Russia contains some of the most fabulous human beings to ever break bread, they do take exception, on purely racist grounds, to someone exercising an opinion that might run counter to their own. “How could you possibly know? You’re not Russian”, was the refrain.

Having studiously ignored this racial deficit in my make-up for those thirty five years, always considering myself a vastly superior human, and having always laughed inwardly at such comments as bagatelle I did something unthinkable.

I considered the possibility that I might be wrong and revisited the exhibition.

For this Damascene moment I have to thank my friends, young and old, but the path to righteousness is often rocky. They also supplied the pearls of information that Goncharova always considered herself Larionov’s pupil and that Larionov was the touchpaper that lit the avant garde, the godfather of one of the greatest, most experimental and, frankly, brilliant art movements of world history.

Therefore, my review is essentially a review of that second visit when, armed with this information and suppressing my Larionov/Goncharova inner debate, I seek to give you, fortunate reader, my view of Larionov as an artist, as seen through the prism of this exhibition. 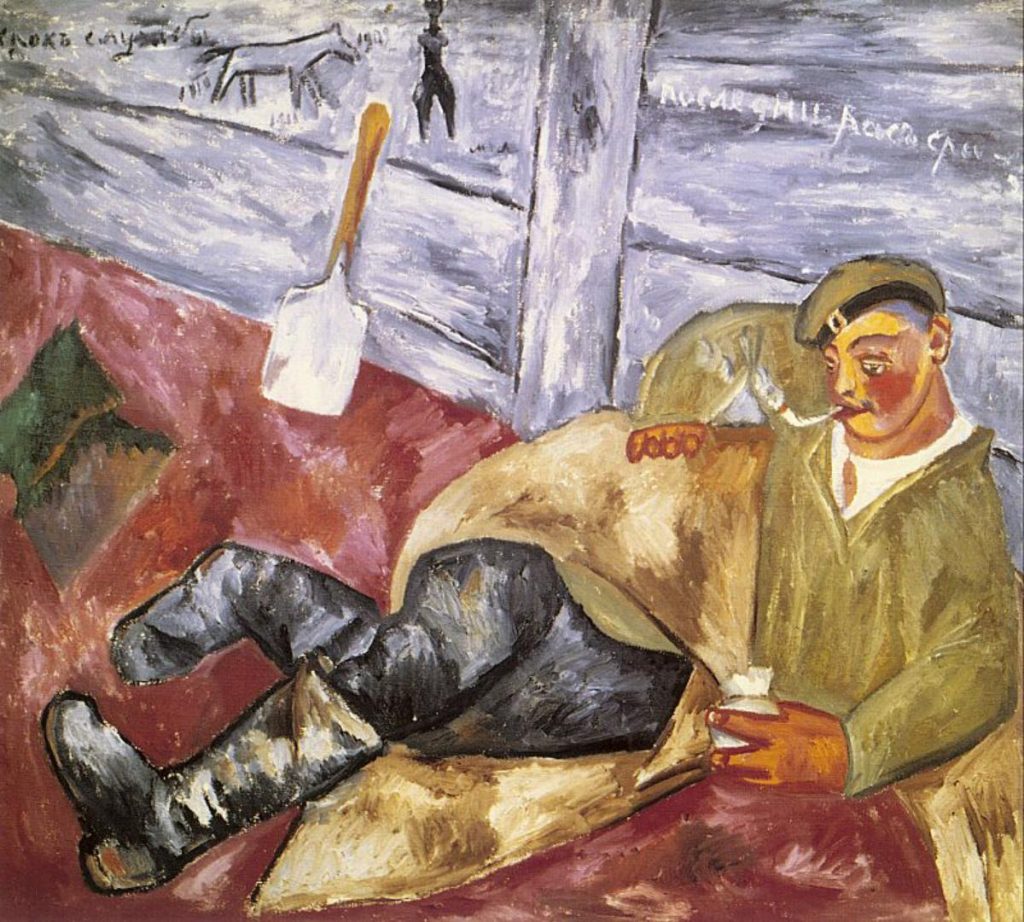 Firstly, I need to rid myself of this early, to my Anglo-Saxon, non-Slavic eyes, this show clearly shows that Larionov is the inferior technician and, furthermore, lacks the breadth of imagination of his wife. Sorry, His “Self portrait with a Turban” from 1909 is fine. I love the arrogance of the sitter, his sheer confidence but pictures such as ‘Soldier Resting’, indeed the entire army series seem to me far more about substance than style. They are funny, satirical, sharp, lovely vignettes of the what must have been a stifling existence in the Tsarist Army. But the paintings themselves, technically at any rate, are third-year student level which, as I am sure my Russian friends will tell me, is the actual point.

The comparison between Larionov’s Peacock and that of Goncharova is moot. Larionov’s versions, whilst popular among fakers, simply do not have the visceral impact of Goncharova’s seminal work. I struggle to see their point, where is their visual hook? Similarly, whilst the voluptuous nudes (one looks like one of Goya’s Majas which is, I am sure, the intention), must be viewed in their historical context and are, even on these grounds, revolutionary in every sense of the word, there is nothing to hit the viewer in the solar plexus. Some of the landscapes, ‘Camp’, ‘Stables’, so help me God, are just plain boring. 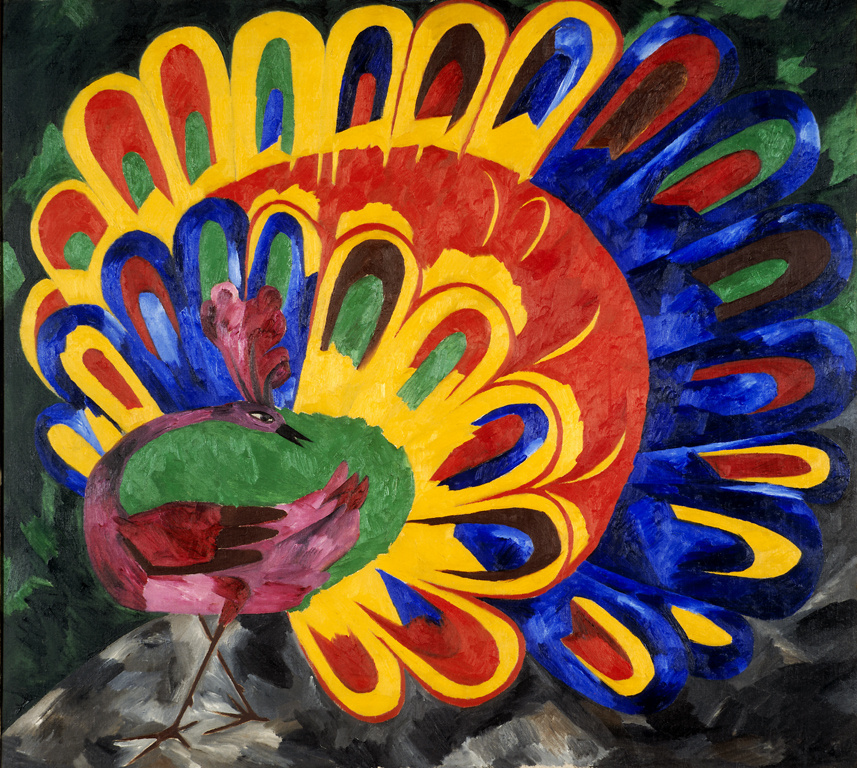 The exception among the nudes, Venus from 1912, in which lies the yellow figure of Venus lying on a white sheet in a great expanse of orange, is a marvelous joke. It must be a joke, for it cocks a snook at every Venus ever painted, from Titian to Giorgione, via Velasquez. This is fun, this is satire, but is it art?

The Four Seasons are painted in the same primitivist vein. These are fun pictures, there is no denying it, glorious dashes of irony, lubki with a twist. I love the sense of self confidence, the sheer arrogance of the artist sticking his middle finger up at society. Russian history has always been the individual versus the state debate and here is the ultimate self-expression. Imagine stiff-shirted, conservative, Russian society being subjected to such images in 1913, the half-naked Goncharova carried on stage by the demonic Larionov still beggars belief but, as works of art, as visual images? Do they work? They are revolutionary, in the sense that they are images painted in a style previously unknown in the world art canon outside of so-called peasant art but, are they great works of art? I am not sure. 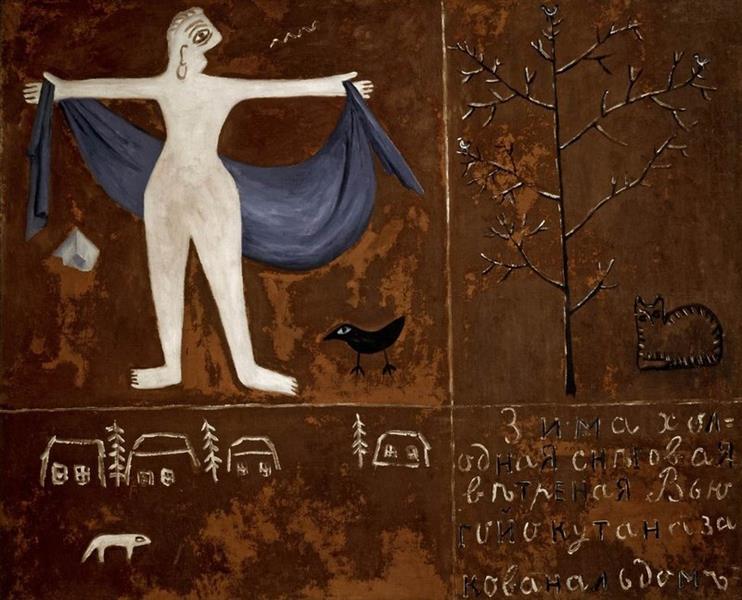 Larionov is a far more uneven artist than Goncharova and I am going to ignore their entire Paris output when, quite frankly, they lost any, and all, inspiration but I could not help recalling the 2014 Tretyakov personal exhibition of Goncharova. That show had, if I recall, twenty, twenty-five masterpieces. Here, they number but ten. 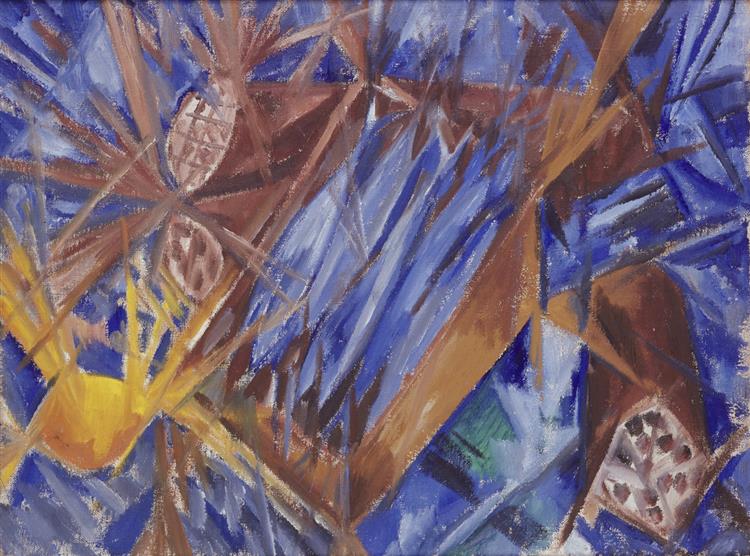 Where Larionov really hits his straps and becomes a true Futurist is in his Rayonist paintings. These are utterly spectacular, brilliant bursts of visceral energy and rhythm. However, I could not help noticing that those paintings which mostly grabbed my attention, purely in terms of their quality, were mainly held by Western Museums and collectors. The finest picture at the exhibition, ‘Portrait of Tatlin’, a world class, hit-you-in-the-nuts masterpiece is from the Pompidou. Likewise, ‘Promenade’, ‘City at Night’ is in London, ‘Rayonist Sausages’ from the Ludwig, ‘Glass’, from the Guggenheim. It is these museums that had the first pick of Larionov’s atelier and, as museums tend to do, took the cream. Whilst this argument is slightly erroneous, Soviet Russia had neither the funds nor the access to Larionov’s oeuvre, it seems no coincidence that those earlier primitivist paintings so admired by my Russian friends, ‘Cossack’ from the Tate aside, were almost entirely ignored by Western institutions. I believe this is no coincidence.

The Tretyakov Gallery, despite having among its staff some of the nicest and most charming ladies in history, has also really outdone itself with the appalling hanging of the show. At the opening party, one Russian collector, long past his sell-by date, was heard howling at the halls at the primitive level of hanging and lighting and it was hard not to agree with him. As the only Russian organisation not predisposed to help rid the world of Russian fakes, though in their defence I feel sure they have had instructions from above, I am never entirely sympathetic with the Tretyakov but the only one of the halls that was not hung and lit in amateur fashion was the Rayonist section where, guess what, the seminal ‘Tatlin’, Larionov’s finest picture, hung on his own.

Now what could possibly be the reason for that?