Our contributor and artist Ksenia Kazintseva met with musician Mariia Chernaia to talk about art, music, education, and performance.

Ksenia Kazintseva: So, an artist and musician meet for interview – I am very curious to know more about your interdisciplinary practice. It would be great if you can tell us about yourself to start with.

Mariia Chernaia: I’m Mariia, a pianist working in different genres. Throughout my life, I’ve been in touch with music via different formats as well as art. Being from St Petersburg, that was a natural trajectory for my life as the city is rich in culture. There are many collaboration between disciplines and so the boundary is quite blurred, when a performance combines visual art and music, as well as movement. 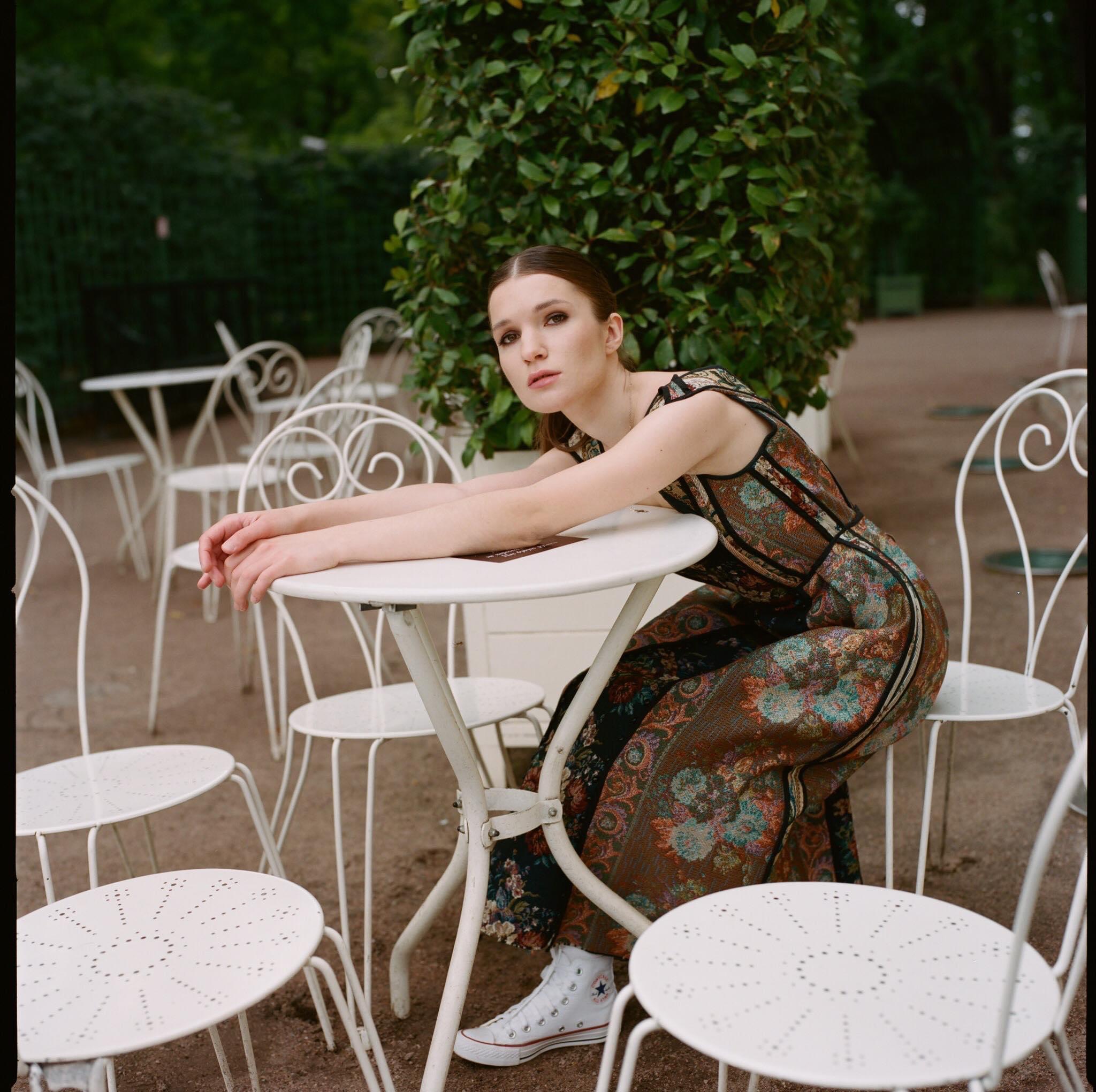 Ksenia Kazintseva: I saw one of your performance pieces and was really impressed – it was definitely on the border of fine art, especially since installation and this kind of videos are now part of art education. How did you come up with the idea for the project? Or did you get involved through friends?

Mariia Chernaia: A good friend of mine, Nastasya Khruscheva, a composer, and her husband Alexander Artemov came up with the idea. I was only the performer of the concept. If I watched it without knowing the idea behind it, I think I wouldn’t understand the whole sequence of events, the revealing dress, loud breathing and the absurdity of it all. It is a return to the newest archaic, a pre-birth state of the new academic passion. Everything is out of line. It is shown there purposefully. During the process of the performance, I truly fell into a trance, a state of almost complete insanity. Therefore, I understand why for some audiences it is hard to understand it without knowing the context. The point we were trying to make was that this is contemporary art that proves the genre of concert is slowly dying. It’s all very sarcastic to such a point that there is a kind of eroticism, the director is breathing with me. Originally, we planned that I’d be breathing alone, but the sound was too faint and to reinforce it, he joined in. When I watched it afterwards, I was scared that people wouldn’t understand it, I certainly wouldn’t. I don’t know how people watched it because it’s challenging. 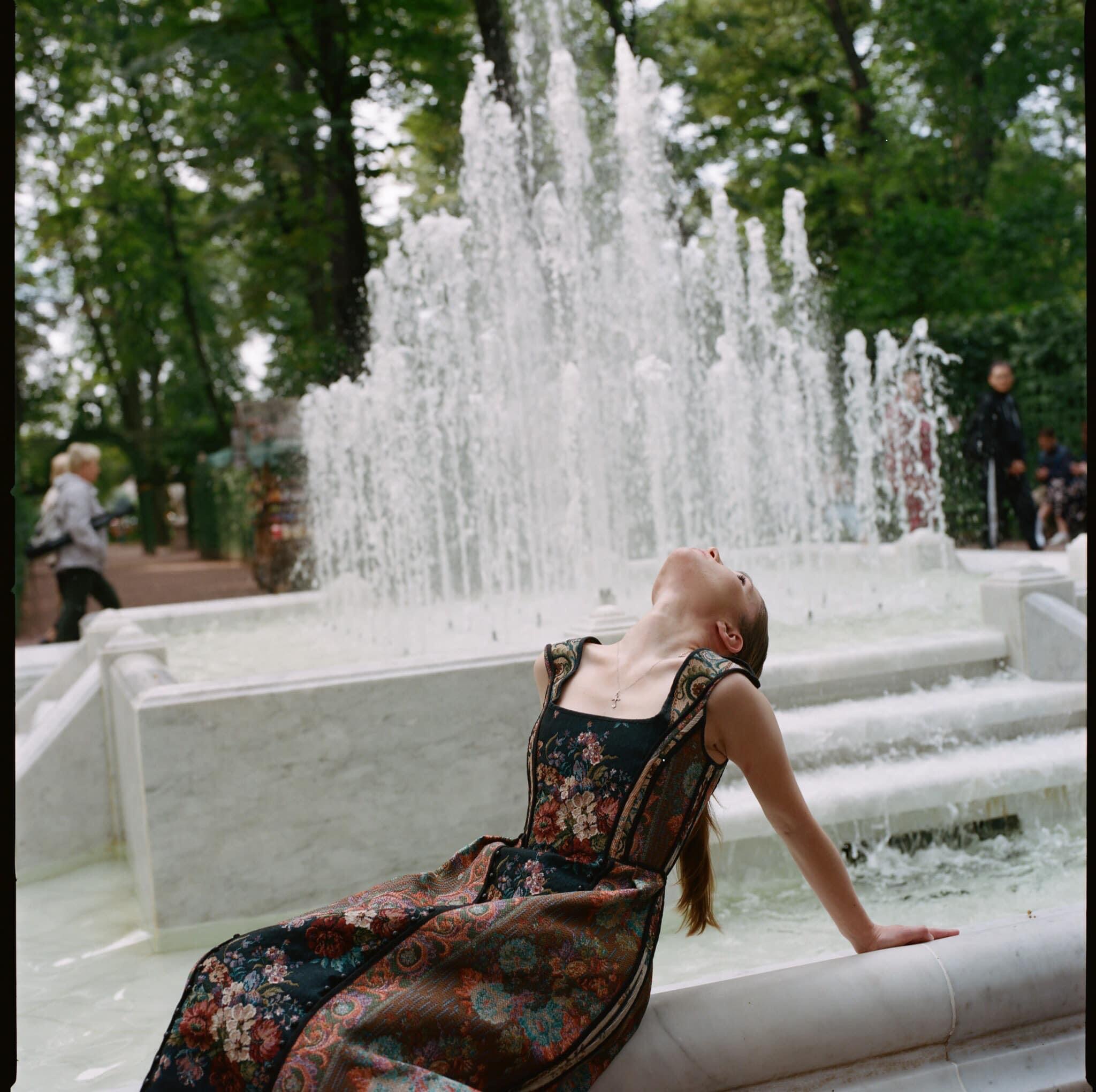 Ksenia Kazintseva: I think the European audience is quite used to it, and it’s more understandable. We’ve seen Marina Abramovic and so many other artists, whose works are hard to understand to begin with, but then the signifiers add up over time.

Mariia Chernaia: Absolutely. So, my whole character in that work and the breathing man and the dress, the tactility – everything is satire, and is somewhat vulgar. It was meant to be this way and used beyond just its original form, with an additional element that will make it a whole project. This is only a part of it, but to me it was so harmonious that I enjoyed watching it as a standalone.

Ksenia Kazintseva: Could you please also tell me about your story, how did you get into music? Where did you study?

Mariia Chernaia: It’s pretty typical really, my family are very musical because it was common to do extracurriculars in the USSR. So all the way to my great grandparents, there is a history of studying music, and I think I became a part of that tradition. I was very young when I started, maybe four years old, and changed a few tutors as well as institutions. Finally, I wasn’t forced to play but guided through, including the well-known “putting the hand in the shape of a house above the keys”. It was playful and interesting, and I studied there for nine years. It was right on the cusp of the change from seven-year music school requirements to nine, which didn’t bother me and was rather welcome since by that point I wanted to do it professionally. I think many creatives and even people in sport have a moment in their studies where they want to quit. For me, it happened just after graduating from music school. However, I decided to continue my education at the Rimsky-Korsakov school and studied there for four years, where I stopped spinning in the wheel of contests and prizes, I had more choice around what I was playing and where I was going professionally. Constant self-improvement is really important to me, it’s all in your hands. At the moment, I’m studying at the conservatory, and although now the work is more intense, of course, I couldn’t ask for anything else. I think there’s always room for perfection and it’s so valuable to have someone to sign post you through it.

Ksenia Kazintseva:  I definitely understand, and I think as a professional vocalist, I found that I want to do it on my terms which was not possible. And the studies kind of pushed me away from it and into the fine art realm. So I applaud your perseverance.

Mariia Chernaia: I think in music and in sport, it’s easier to win when you are younger. Of course, it’s hard work, but the level of competition is not as high. Adult contests depend on luck and extremely hard work, so they often become the breaking point. It’s clear though that this is the crisis point for most, but I think it shapes you. Luckily on my path, there are not a lot of physical barriers, except for tight hands and crooked backs, but I always try to vary the activity.

Ksenia Kazintseva:  I’m also really interested in how you merge your traditional education and the pull toward the contemporary. I see that you’re very passionate about innovation and not being stuck in the past. And in the West, I see strong conceptual development. This can become detrimental to actual skill, but at the same time new work is so needed.

Mariia Chernaia: I agree, there are many cases where musicians study in Russia and then move to Europe to study contemporary music. I didn’t used to understand it, even my colleagues’ music. Phillip Glass was not for me at all, and I rejected all similar things. But after immersing myself in it and hearing colleagues talk about it, I understood more and more. I truly value traditional preservation, and don’t understand people who have not studied historically significant work and claim to be musical experts. We just don’t align there, because you cannot listen to Glass without knowing Bach. It’s evident that new creatives have gaps in their expertise whereas I’m definitely a traditionalist. I feel that as an artist, I have to be able to contextualise myself. And maybe some rejection of contemporary literature is still present, I don’t like most of it and feel ashamed putting it next to Nabokov in a library collected by my family through the decades. It’s so important to be culturally educated, and aware.

Ksenia Kazintseva:  And I think that also allows us to classify contemporary work, similarly to developed visual taste, literary and musical education allows us to find valuable, meaningful pieces created in the 21stcentury. That’s part of the reason cuts to funding in cultural education are so concerning.

Mariia Chernaia: I think also, education is not something that owes you something. You need to absorb and process it, to fuel the learning process. You could read something and not understand a word, and, of course, that’s not the education’s fault, but a matter of your commitment to it. We have many resources, and we should use them accordingly while we have the chance.

Ksenia Kazintseva: It’s important in finding a network as well, maybe this type of education helps us find people who still want to know about history. But it is a shame that the focus is shifting from that, I think many get caught up in routine and anything, but inner depth.

Mariia Chernaia: I think looking at the world, I feel like mine is immovable, and that life is cyclical. Whatever is meant to come your way, will do so, and it’s important to focus on your life and growing personally. Life could end at any moment and we have to make the best of it. Some people feel they mean something, but I feel quite alright not impacting anything, rather enjoying what is available.

Ksenia Kazintseva: In my view, it’s not that everything is bad, but I think rather culturally complicated.

Mariia Chernaia: I believe that better work can’t be made, the peak of the arts has passed. Sometimes it feels like everything has been so unnecessarily complicated just to look sophisticated. There’s baroque and classicism, romanticism, and we can’t make better. It’s important to contribute for the sake of maintaining interest, that’s for sure. But I feel like everything will disappear eventually, and I think we live for the fulfilment of our own soul. As long as you feel fulfilled, and have a light heart, you are succeeding no matter what you do.

Ksenia Kazintseva: Nonetheless, I think it’s interesting to see how far you can push yourself in creativity. And it’s not necessarily about changing the world, but maybe producing something that evokes emotion, that brings people together.

Mariia Chernaia: I think my musical practice is a little screw in a bigger picture that preserves culture. I believe just contemporary art and music will not fuel the deepening of the soul. And also, I think it is our responsibility to preserve culture, one person at a time. Even Abramovic has released a project, I couldn’t really watch it. I like the visuals and the production, but other than that, I couldn’t penetrate the idea. I do know her work very well, and what inspires me is her partnership and her story overall, her femininity. Her performances evoke emotion do resonate with me, even if I don’t always agree or understand her.

Ksenia Kazintseva: I don’t think each of Abramovic’s works has to appeal to everyone, but she’s able to connect to the audience, to evoke a reaction. That’s something that connects contemporary art successes today, they often focus on the reaction. Coming back to our original conversation, what can we expect from you going froward? Are you working on any new projects?

Mariia Chernaia: I am planning many things but can’t really share too many of them. They will be released shortly, and I can confirm that thanks to the pandemic I had time to think about the future, and more projects. We’re all in a bit of a suspended state, but it’s valuable time we can take advantage of. I performed some digital concerts, but they were so homey, I felt like it was a little too relaxed. Although it builds a bridge with the audience, I thought they were not as good as they could have been. So many artists have found ways of producing things better, but I think the format is not quite for me. But yes, absolutely keep an eye out for new releases, here is the link to the most recent one.