The Editor at RAC, cruelly and with malice aforethought, has been badgering me to write a review of the sensational sales results at RAW and, having been ensconced in my rural lair for so long, the spirit is willing but, God help me, the flesh is sooo weak. But then, isn’t all flesh weak? Mine, for example, previously apollonic, positively hangs, sags, as it begins its journey into eternity.

This panic-enforced absence has also left me with an in-tray the size of Mount Elbrus and thus my normally pithy, in-depth, review will be short, truncated and decimated. Sorry.

As we emerge, blinking into the sunshine, from the worst nine months since my last pregnancy, there is on the horizon light. The Future. Arcadia. Personally, I think we have emerged from this latest attempt at collective suicide as the most vacuous, egocentric and hapless generation since the ape-creatures of the Indus prowled the Planet but that’s just me. Even my Alma Mater has got into indoctrination. Viva Marx! Floreat Etona? My proverbial rear quarters!

Phew, got that out the way.

So, my little Christmas bunnies, forgiving my little cathartic outburst, let us look, as did the Magi, with wonder at the results of the three auction houses basking in the manger of their collective success. As I write the total in sales is nudging £28,000,000 (twenty eight million smackeroonies sterling) so let us give thanks, journey from the East and follow the star to Bond Street, London where we should award medals, the gold, frankincense and myrrh awards to our Bond and King Street chums, for unto us a stonking result is born, unto us Hope is given.

To Bonhams we award the Myrrh Award, as delivered by Melchior

The previous critic incumbent at RAC, a fine man of several summers, tended to an acerbic approach to reviews but always, and this was a point very much in his favour, looked at statistics. I have learned at the feet of this Master and, from now on and assuming I can hold down the post, I will include these figures.

Despite something of an M4 pile-up in the Works of Art section, I reckon Bonhams set a pretty good tone for the auctions getting some absolute howlers under the radar. The Nesterov, of which I had been so scathing in my previous review sold, the weak Larionov Still Life did extremely well at £75,000 (or £20,000 hammer), a gopping Nissky hit £37,000 and both Harlamovs Hit the Heights. One was called ‘Contemplation’, a state of mind that affects me sorely whenever I think about anyone, assuming they are human, who has parted with hard cash for these daubs.

A Maria Vassilieva portrait of a mother and child also sold for £8,925. After a long and tortured harlamovesque period of contemplation during which my pen hovered over the, ‘you are sodding joking’ button, I have decided that the Christmas spirit is upon me and, rather than risk a visit from Joseph Marley’s (any relation of Bob?) ghost after a Michaelmas-skinful would like to offer my sincere congratulations to the buyers.

To Christies we award the Frankincense Award. Modelled and delivered by Caspar

This award, which rhymes with ‘rank nonsense’ is not to be confused with Frankenstein whom, so I am reliably informed, was a monster. The term ‘monster’ is, of course, not one that reflects the views of the Editor, nor Advisory Board, at RAC but, as an independent critic I am free to give the phrase rein. Caspar, it is thought, was from the continent-that-isn’t-Europe so genuflect now, my little merinos!

Christies’ Sale was a Monsters of Rock-sized belter, the Led Zep of sales with extended Jimmy Page solo but, bum note of bum notes, why don’t they put those lots that didn’t sell on the website, maybe someone might contemplate a cheeky post-auction offer? I understand that it was a policy much beloved in Soviet Russia and is very much de rigeur in Borist Britain, if in doubt lie, but it’s fabulously annoying for any reader and potential after-sale buyer.

Bonhams save the statistician hours of buggering about by printing the total number of lots sold, or unsold, but the Christie Gang, of Rillington Place fame, put this reviewer, with hardly any time on his hands (I run an international art-dealing business), in the position of having to trawl through the site and count up the number of lots unsold likje an infant with an abacus – it was 24 out of 115 in the picture section and that’s a percentage of 79%. Total sales – and admirable £8,500,000 odd.

The leading lots did famously, except the Roerich which was, as predicted, put up again for sale for too soon. Shock, horror, this information is not available on Christies site but then what can you expect from a site which, in quite fabulously annoying style, allows you to click on a lot, examine it in detail and then hit the ‘back’ button only to be sent back to the home page. Sort it out, my little tidings of comfort and joy.

A £200-300,000 Paris-period Korovin hit, after exorbitant auction-house charges, well over a million squids, Aivasovsky was solid, likewise Nesterov but then Nesterov is, by nature, solid. Impenetrable. Stodgy too. Like Spotted Dick. On the subject of stodge, Nickolay Boggy-Bells did well, as did Serebriakova, one of those artists whose success I cannot fathom. A very average Exter also hit over £450,000 on a £200,000 estimate. Other bumper, stocking-filled-to-brim numbers included the Shchekotikhina-Pototskaya (that took me half an hour to write) which, to my immense surprise, sold for three figures and a Soviet plate with a £20-30,000 estimate. Some owner lucked out when this baby went for over £200,000. 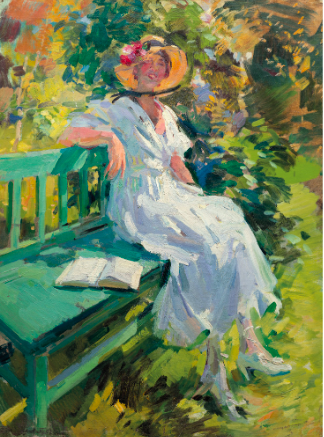 To the infant Sotheby’s, in its swaddling clothes, I give not only the Gold Award, as offered by Balthazar, but a little Christmas ditty:

What a lark! You’re a buccaneer.

I’m a worthless hack, back on crack, a flop,

Yeah baby, let those Christmas bells ring out for Sotheby’s Inc! I can find no Arsenal-inspired adage, let’s be honest they’re crap, that can come close to describing the sheer ‘Bingo!’ of their Russian results. Twenty million. Yes, brothers and sisters, come close to the radio and hear the tidings. Twenty million.

Glory to the Bond Street King,

Figures in the realm of wild.

Let’s get out of the way that about which I know nothing, works of art and, in particular those items sold by the Brooklyn Beckham Museum. White Glove Fever baby! 100% sold and every man jack of them way over top estimate. Pandemic? What pandemic? I bet the negotiations for that little treasure trove took a certain amount of charm, generous rates of commission and sweat but as Karl Marx, a figure with all the historical credibility of Ванька-станка once remarked, the end justifies the means and Sotheby’s should be monumentally proud of themselves.

All the Aivasovsky paintings, like the very boats that feature large on these canvasses, came in with one, a(nother, bleeding) shipwreck, hitting the £2m mark. Semiradsky did just fine, the plethora of poor paysages all found buyers and then the Somov. In its defence, this was a very good Somov, apparently unknown before this sale (it was snapped up for some bargain price in France a few years back). With a £300-500,000 estimate, this sleeping marquise erupted Edward Van Halen-like and hit £900,000 hammer. 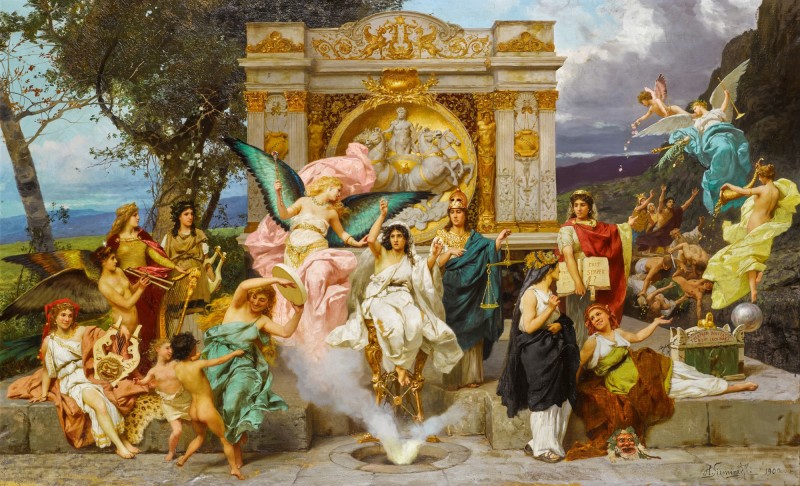 Then began the cream.

I had waxed lyrical about the sale beforehand but, to say that Sotheby’s had amassed a pretty good collection of theatrical pieces is rather like saying that AC/DC are a pretty loud band. What Sotheby’s had put together was the Greatest Hits version, with every one a coconut and the Yorkies must be thrilled to bits with the results.

There are some songs, rather like the beginning of the Sotheby’s crescendo, that begin slowly. ‘Running with the Devil’, begins with a few simple lines of bass followed by an apocalypse of guitar, crashing cymbals and gonzo vocals and lo, Good King Wenceslaus looked out and, as with this rock classic, delivered a few Benois’ lines of bass. Then Goncharova’s crashing Frankenstien came bursting in, followed by Exter’s mad vocals. Result after result, breaking of upper estimate after breaking of upper estimate, it was a riot. Of course, there were times when the band held back, the unsold costume design by Willy Pogany, springing to mind. Forgive me dear readers, but a name like that, in any language has ‘overtones’ and whilst поганый Willy failed to deliver, the show stormed on. Tchelishchev hit the high notes, way exceeding expectation, before an admittedly stunning Georges Barbier, on a £4-6,000 estimate, found its way to six figures. Rock on!

The expected lull, two wildly over-estimated works by Goncharova and Larionov that failed to sell were followed by a return to form when two middling Bogomazov’s sold, albeit for low estimate. It is a matter of enormous sadness that ‘Catafalque’ was not purchased by a Ukrainian Institution, a location to which it belonged, but you might as well put your hand in a barrel of piranhas rather than deal with that lot. Corruption, what corruption? Endemic? No, pandemic.

My Russian friends, who number in the thousands, are often critical of my dismissive attitude to the work of Russian artists of the mid-1920’s to mid-1930’s but, and in this case they are right, I really don’t ‘get it’. I know that old Christmas Chops was a pupil of Malevich but that doesn’t make him a great artist and when the staggeringly dull ‘Silo’ was sold for £650,000 odd on a £40-60,000 estimate you realise that you are in the Magic Mushroom Realm of Art Dealing. ‘Boy with a String of Onions,’ by the same artist shows, as the title suggests, a boy. A further clue suggests that this boy is represented with a string of onions which, and this is not made clear in the title, have a life of their own and have become, for want of a better word, erect. ‘Boy with an Ushanka’, which could be rhyming slang, does the same. The Ushanka is not fixed on top of the poor lads’ head giving him the look of a Spanish police official circa the Civil War. Perhaps these stylistic quirks are just that, stylistic quirks and I am just an ignorant Scrooge? 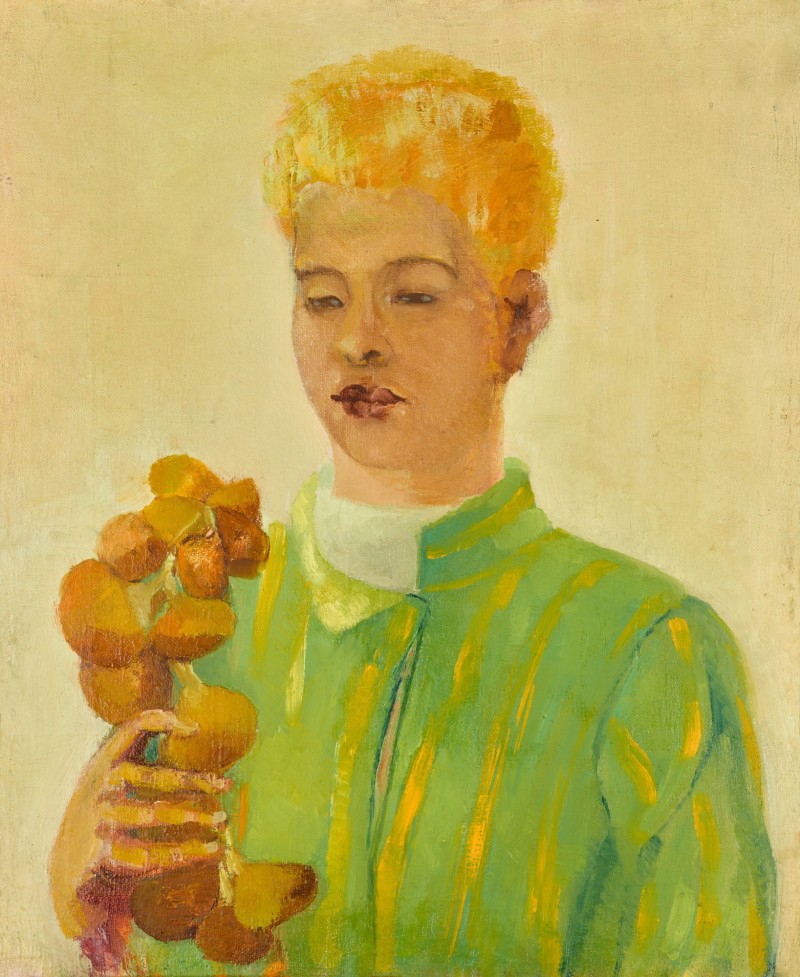 The auction then fell into a bit of a lull, as is almost always the case at the end of any auction, as a few Soviet-era landscapes lurched their way over the finish line, before a couple of Ivan Chuikov’s gave the sale the end-of-times ending required, fetching four times their upper estimate. Cue clashing cymbals, zithers, lutes, guitars, lights, dry ice and bass.

Forgive, my little Christmas puddings, the brevity of this review but doubt nothing in my love of the collective you this Yuletide.