The Magic of Imagination: Mamuka Dideba’s Paintings on Show in London 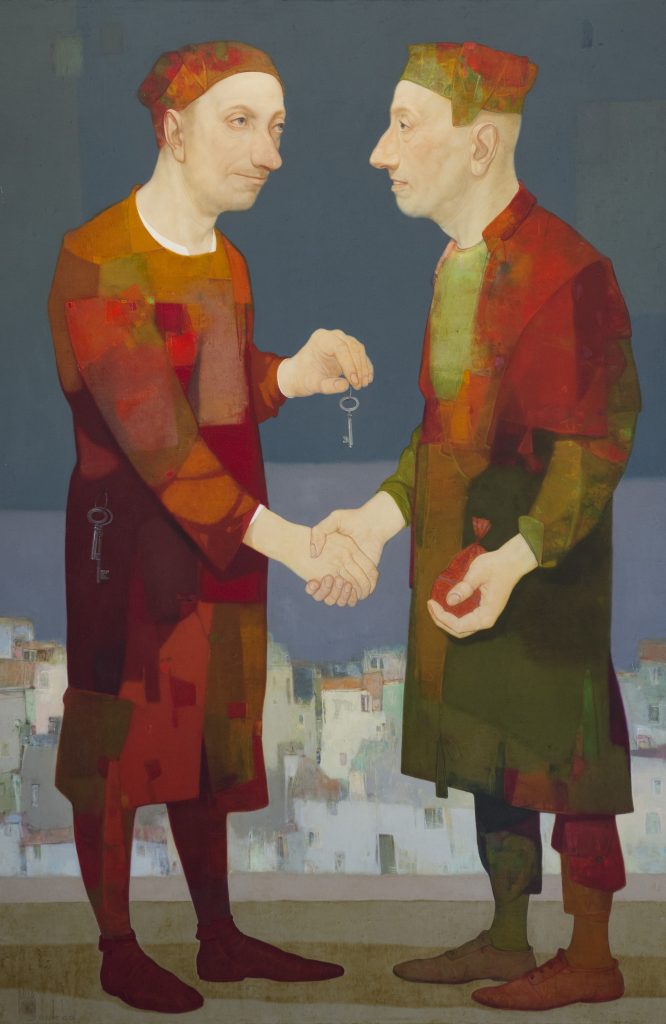 Each artist is a universe in his or her own right. Like magicians, artists conjure up whole new realms and make them visible. Some of these realms are the utmost delight to explore! This can be undoubtedly said of the Magical Worlds of Mamuka Dideba (Didebashvili) and the characters who dwell there: engaging, determined, quixotic, stern or serene, occasionally pompous, they nevertheless remain playful, naïve and somewhat childlike. The artist’s fantastic world is inhabited by multiple eccentric characters, such as wandering vagabonds, philosophers, warriors, revellers, jesters, house-keepers and all possible human types represented with love and gentle humour. Sometimes they may even invite you to join their feast of Georgian wine and home-made cheese. Even though life-like, they are generalisations, an artist’s meditation on the human condition and human character. As Dideba himself points out, “I strive to present them in such a way, so that their essential character could be glimpsed from hints at their occupation and descent. I also display their personal accessories, because they are informative and add to our ability to understand and interpret the characters.” 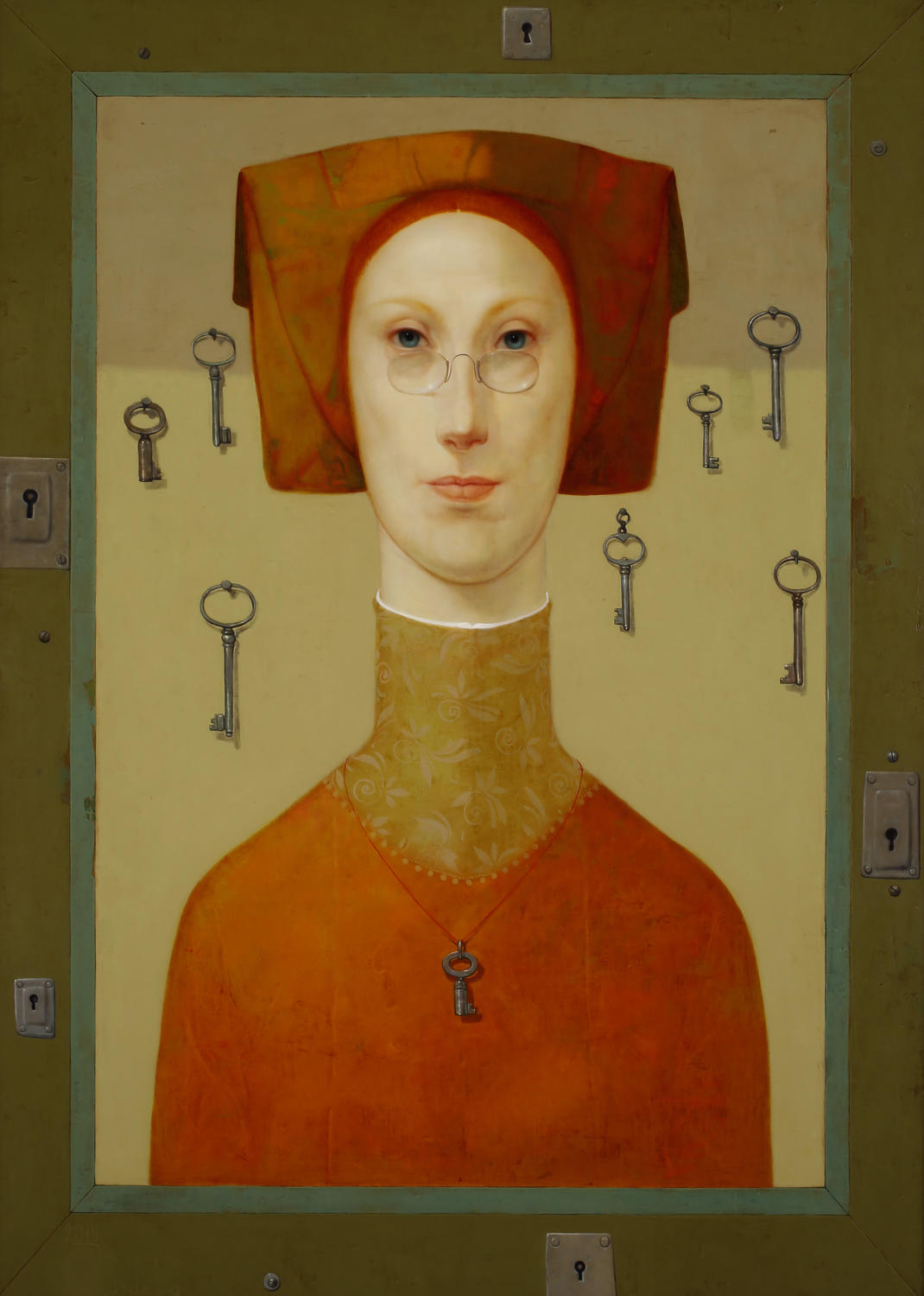 When looking at Dideba’s figurative compositions and portraits, one cannot fail but notice his intrinsic connection with the Renaissance, both Italian and Northern. His Sommelier (2016) is as regal as Bronzino’s Cosimo di Medici or Quentin Matsys’ Portrait of an Old Man. A double portrait of husband and wife is iconografically related to the famous Uffizi diptych of Federico da Montefeltro and Battista Sforza by Piero della Francesca. While the female image of the Key Keeper (2015) is reminiscent of Rogier van Weyden portraits or of some 17th century Flemish genre scenes, his Water Seller (2015) almost directly points to the bodegon by Velasquez of the same title. His Old Warrior (2015) is introspective and contemplative, while the Gladiator (2018) turning towards the viewer has something Brueghelesque in his features and bearing (it is not by chance that Dideba was dubbed “Georgia’s Breughel”). And the artist’s Self-Portrait (2014) somehow reminds one of Pontormo’s Castiglione. 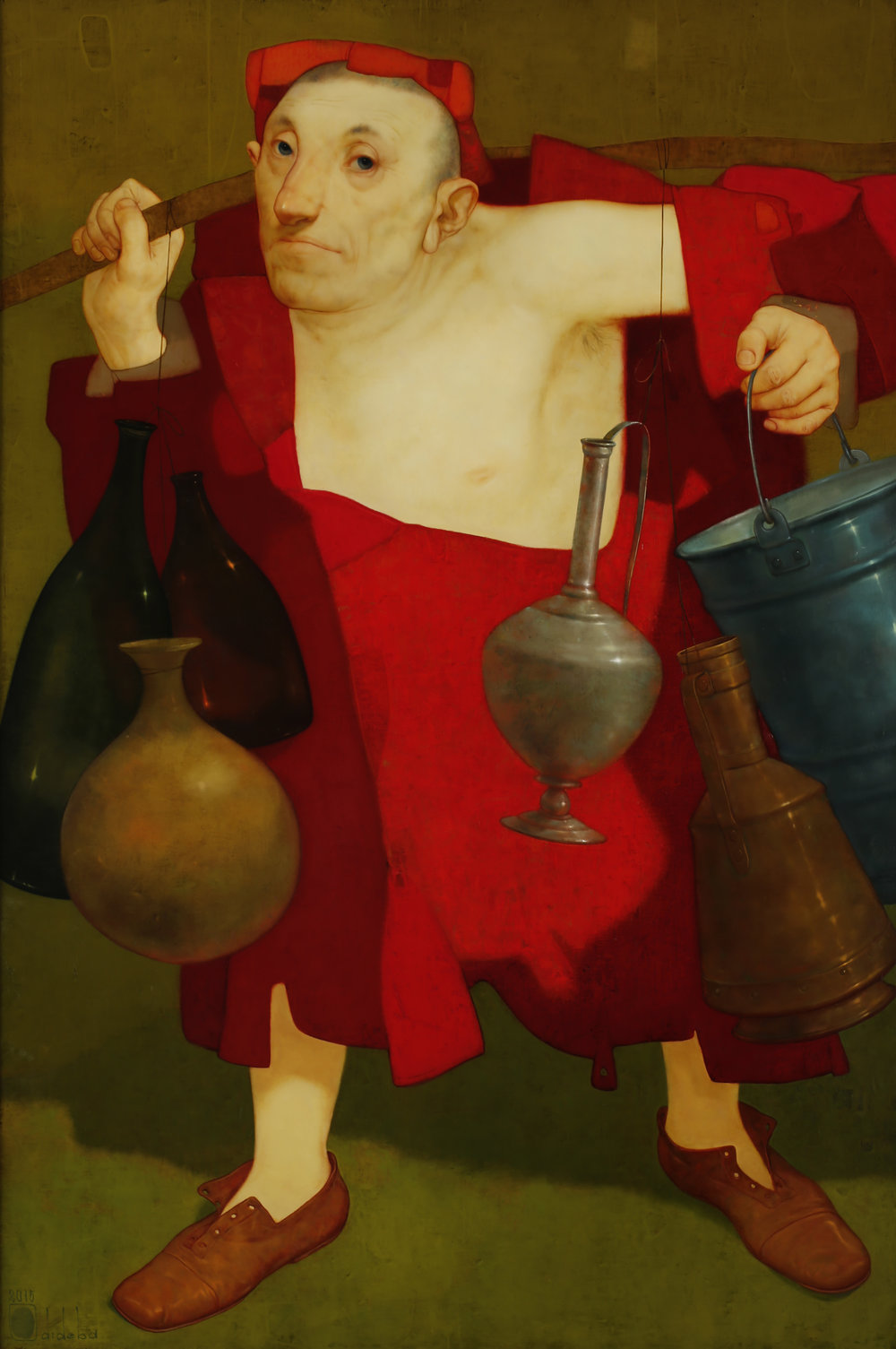 We may infinitely continue this intellectual game and keep on finding more and more art-historical parallels and prototypes, without establishing any direct source. No work of Dideba’s is an imitation of the Renaissance portraiture, but a visual synthesis, supplied by memory. The Tbilisi-born artist must have also been inspired by everyday scenes from Georgian life. Although pointing to the Renaissance, Dideba’s paintings possess an unmistakeably Georgian quality: cheerful, philosophical and celebrating life. These visions, memories and impressions have been transformed and elevated by the artist’s imagination. As he once himself acknowledged, “my chief goal is to transform the mundane and the realistic into something special and elevated”. As a result, each painting turns into something mythical, monumental and replete with visual allusions.

Moreover, not only does Dideba appropriate visual idioms of the Renaissance and Early Baroque art, but he also displays extreme technical mastery in adapting the imprimatura, a multi-layer Renaissance technique, requiring skill, patience and knowledge of pigment properties, to his artistic and expressive purposes.

He does not stop here, though. In his typical manner, Dideba continues to experiment with the Old Master technique and uses it in his abstract compositions to an astonishing effect. His geometrically and colouristically complex abstractions take on new contemplative and expressive dimensions. The painterly surface radiates light, adding to the mysteriousness, emotion and depth of the artwork, as can be seen in the Autumn Prelude (Night), (2017).

Now some of these paintings can be finally seen and admired at The Magical Worlds of Mamuka Dideba, the artist’s solo show in London, organised by Katrine Levin Galleries in partnership with Russian Art + Culture. Follow the link for all the details.