Valery Gergiev, known for his bold choices of repertoire and the ambition to keep it as vast as possible, has recently tended, as far as productions are concerned, to take only safe bets: impressive costumes, expensive sets and as little direction as possible. In this context, the revival of ‘The Enchantress’ is even more of a triumph. 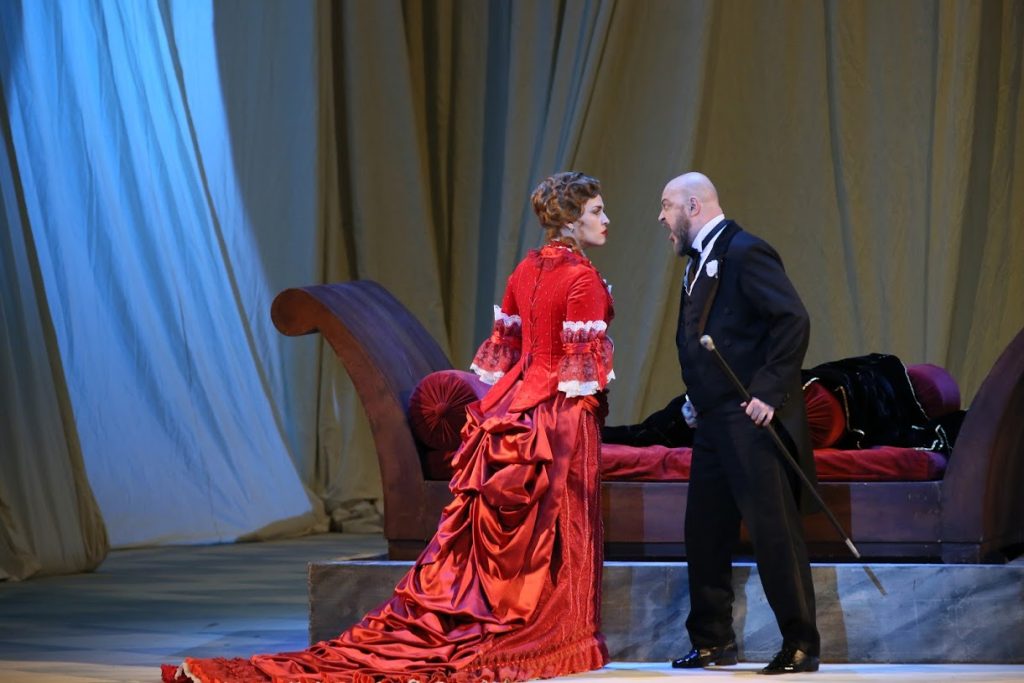 ‘The Enchantress’ is a rarely performed piece by Pyotr Tchaikovsky – which one might find surprising, as it is a late work with only ‘Iolanta’ and ‘The Queen of Spades’ ahead, meaning that he had already written ‘Eugene Onegin’ and ‘Mazeppa’, and a ballet as musically rich as ‘The Swan Lake’ – and proved himself to be able to handle a period drama, a love story, and a fairy tale with equal knowledge and innovation. Still, the opening night was far from a success, and music and the libretto by Ippolit Shpazhinsky were equally criticised – and the latter has remained a problem for posterity, too. The idiosyncratic and mannered wording for a complex plot (involving two intersecting love triangles, a chaste woman with poor reputation, an attempted slaughter and an actual poisoning, and a mad scene in the end) was, however, chosen for the Mariinsky production in its protogenic form – complimenting David Pountney’s spectacular production and Valery Gergiev’s tongue-in-cheek conducting. 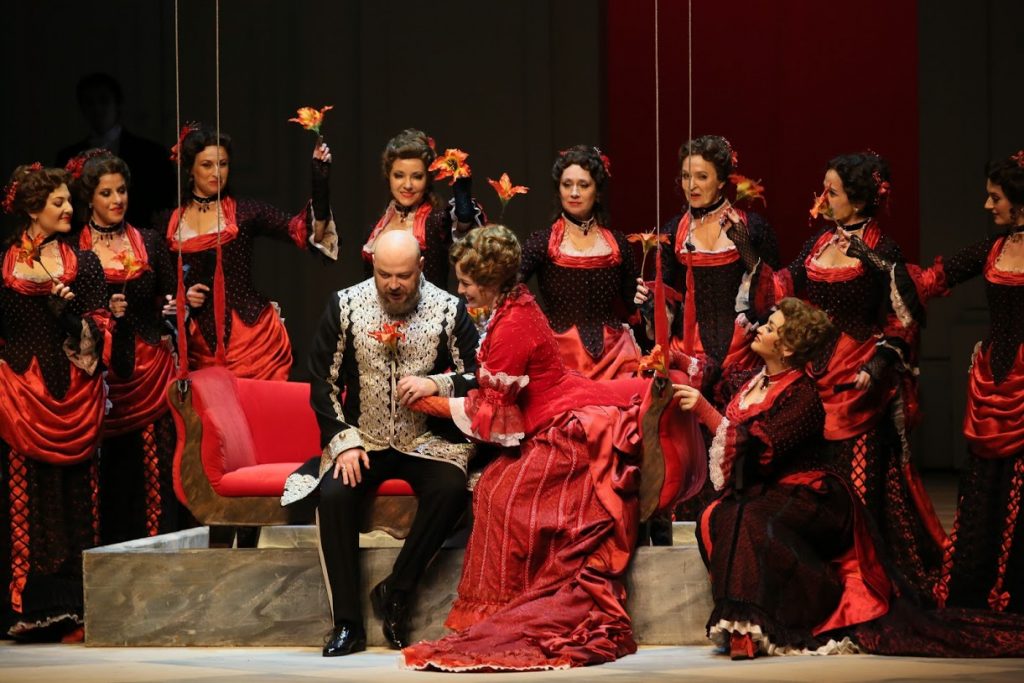 The opera lasts for almost four hours, but the evening is bound to be exciting, and not only for music addicts.

A connoisseur of Tchaikovsky and an exquisite conductor (if you catch him on a good night), Gergiev does not take the drama too seriously. Instead, he is focusing on its hidden musical gems, linking ‘The Enchantress’ to the vast world of European opera, past and present. When the baritone Prince Kurlyatev (Vladislav Sulimsky) first confronts the compromised soprano Kuma (Elena Stikhina), his menacing attitude is much like that of Georgio Germont in‘La Traviata’ by Verdi – and so is the musical setting. And the finale with the baritone seeing ghosts, as flutes and violins whirl in a crazy vortex – is that not a reminiscence of Donizetti’s ‘Lucia di Lammermoor’? And of course Rimsky-Korsakov’s ‘The Tsar’s Bride’, written almost a decade later, and Tchaikovsky’s ‘Queen of Spades’, have their musical cameos. 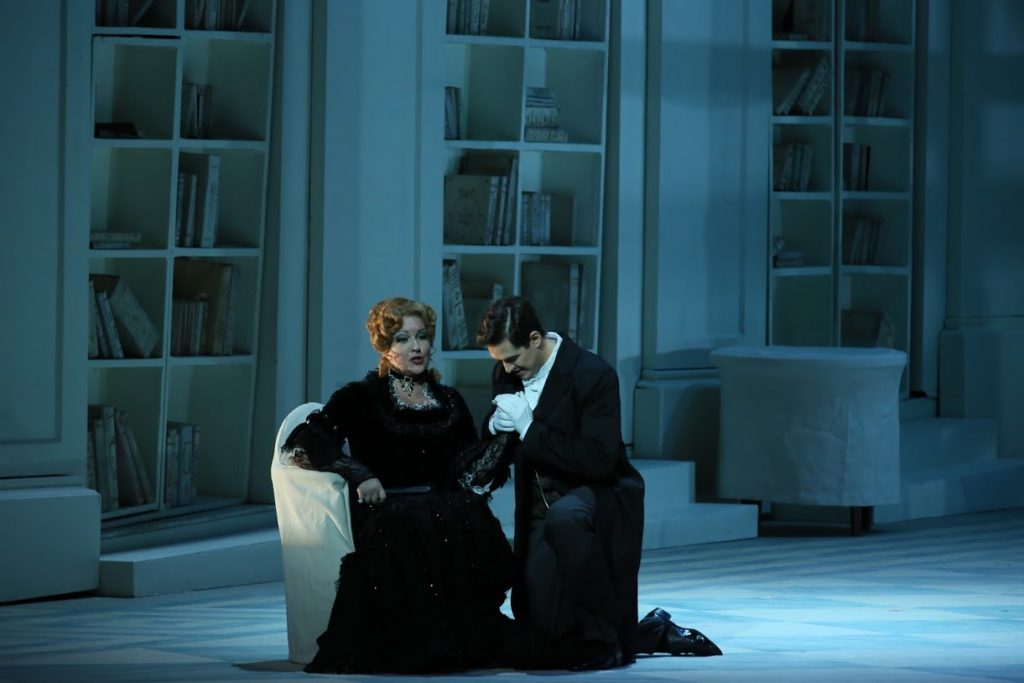 David Pountney sticks to his usual method: uses recognizable images of the Tchaikovsky era and Russian history, and making the most out of the political and the social contexts, he tells a story calling to mind the downfall of the Romanov family. The monk Paisiy (Andrey Popov, always a star in character tenor roles) is a ludicrous Rasputin, the striped singlet of Kichiga the fighter (baritone Vadim Kravets, who has gradually become one of the strongest members of today’s Mariinsky ensemble) evokes similarities with a revolutionary sailor’s vest. The people riot and then are pacified, but the Revolution is in the air. Yet this is only oil for the magic lantern that only Pountney can light – and this wizardry brings to life vivid images that address the emotions, not the mind: Kuma flying on a red sofa, Nenila (mezzo Lyubov Sokolova) with her knitting in her hands – weaving the threads of life, Mamyrov (bass Stanislav Trofimov) turning now into the ardent admirer of the Prince’s wife (mezzo Olga Savova) and then into a woodland warlock. 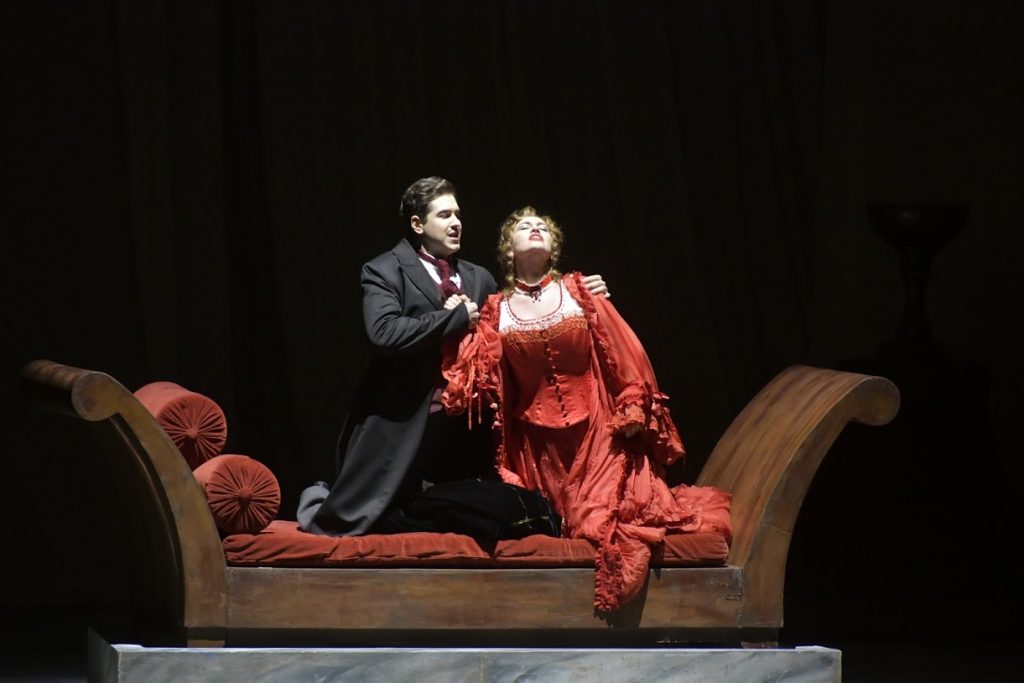 The stakes are rising as the music develops. The first act is a warm-up, with the ladies dancing in their red girdles and flowers in their hands intoxicating the gentlemen. The second, black-and-white, with static blocking, makes one feel the tension grow. The third act has love, blood and passions. And in the fourth everything comes together, with the sets and the lighting as intense as the acting, and irony as piercing as the tragedy. And to top it off, a twist in the finale: the Prince’s daughter (Veronika Romasheva, silent role) in a white gown hopping on a toy horse past the struggling adults.

In 2003, when the production was set at what is now called The Old Mariinsky (originating in Lisboa Teatro Nacional de São Carlos the same year), it was underestimated and ran only 13 times in five years. Last year, the Intendant Paolo Pinamonti who originally commission the production in Lisbon gave the work its Italian premiere at the Teatro San Carlo in Naples with the Mariinsky cast – and finally it is back on the stage of the Mariinksy-2 as probably the best production The Mariinsky can boast today.

The revival still sports the red, black and white sets of Robert Innes Hopkins and the graphic lighting by Mimi Jordan Sherin (adapted for the Mariinsky-2 by Yegor Kartashov). Yet in 2018 the production seems a prophecy of the productions yet to come. It seems that David Pountney could foresee the most essential solutions employed by opera directors since: the claustrophobic white halls of German Regietheater, the parade of quotes – a prop to fight reality in the 2010s theatre, and the trademark omnipresent humor spiced up with the celebrated post-irony – en vogue now, and a rare dish then.

Two upcoming performances are scheduled for January 5. It is hard to foretell how long the production will run, so there is every reason to hurry. Follow the link for further details.

Other Articles By Aya Makarova 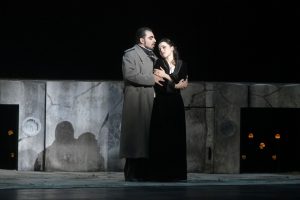 “Lucia di Lammermoor” at the Mariinsky: a display of musical power, and a theatrical letdown