Last year, when Russia prevailed over Spain in one of the biggest upsets in World Cup history, Moscow erupted with chants of “Ro-si-ya! Ro-si-ya!” But the real epicenter of the celebration was a few miles south of the Russian capital, in a place called “The Meadows”, where the nation’s premier stadium, the 81,000-seater Luzhniki Stadium, resides.

Russia’s victory over Spain is just another chapter in the Luzhniki Stadium’s decorated 60-year history. Located in the Khamovniki District of the Central Administrative Okrug, the UEFA Category 4 stadium is the largest stadium in Russia and among the largest in Europe. Its size has meant it has hosted many of the most memorable moments in world sports history, including the 1973 Summer Universiade, the 1980 Olympic Games, the UEFA Cup Final in 1999, and most recently, the 2018 World Cup.

The stadium was built as the Soviet government’s response to its growing prominence in the world of sports. In the 1952 Helsinki Summer Olympics, the Soviet Olympic team managed to bag 71 medals and second place in the team standings. Coupled with its inevitable rivalry with Europe and the United States, the construction of the Luzhniki Stadium was a monument to the country’s dedication to developing world-class athletes. First called the Grand Arena of the Central Lenin Stadium when it opened in 1956, it was declared as Russia’s national stadium. It became the training base for Russia’s Olympic teams and the venue of its domestic sporting events.

One of most memorable matches the stadium hosted was the October 13 match between the Soviet Union and Italy where the Soviets prevailed 2-0. It managed to handle 102,538 fans that day, the largest in its history.

The first major international sporting event that it hosted was the 1980 Summer Olympics. It was the first Olympics held in Eastern Europe and in a Slavic-speaking country. While the games were fraught with scandal, most notably the US-led boycott along with 66 other countries, it showcased Soviet talent to the whole world and established its position as a global power. The country topped the standing with 195 medals, 80 of which were gold. The enormous scale of the Grand Arena as displayed in the opening and closing ceremonies also served as a testament to the achievements of Russian socialism. The fact that East Germany and Cuba, both Soviet allies and communist countries at the time, were included in the top five also contributed to this narrative.

The stadium’s history, however, was not without blemish. In October 1982, the stadium saw the worst sporting disaster in Russian history in a match between Spartak Moscow and HFC Haarlem. After the Soviet police forced fans to only two of the four stands, most fans went to the East Stand which was the closest to the Metro Station. At the end of the match, the crowd rushed into the exits, leading to a stampede that resulted in 66 casualties. In the aftermath of the incident, the media was forbidden from reporting any details and blame was squarely placed on the fans, by the state.

In 1992, after the collapse of the Soviet government, the stadium was renamed to Luzhniki Stadium. It also saw significant renovations including a roof over the stands and enlarged seating areas. It decreased seating capacity in the process but also brought the stadium up to code with global safety standards and accessibility requirements.

In 2007, Luzhniki hosted the Champions League final between Manchester United and Chelsea. While the media anticipated rowdy fans to flock the stadium, the match was largely incident-free. The Russian organisers received praise for their excellent handling of the event.

In 2013, the 14th IAAF World Championships in Athletics was held in the stadium. It is best known for Usain Bolt being considered as the most successful athlete in the history of the World Championships after bagging 8 gold and two silver medals. A large part of the stadium was demolished in the same year while the self-supported cover was retained. 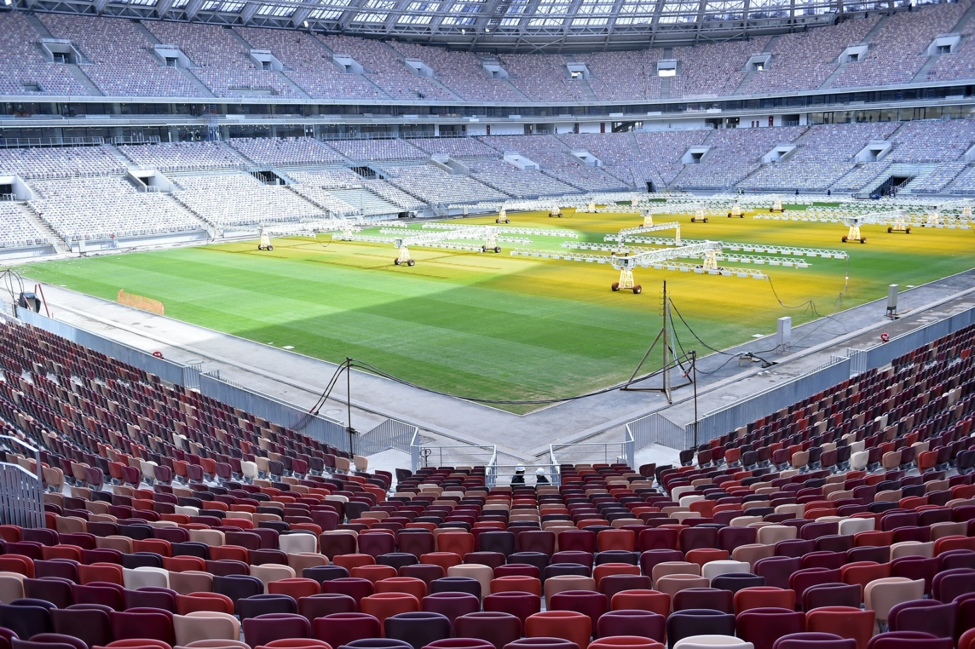 A new stadium was completed in 2017 and its capacity increased from 71,000 to 81,000 seats. Today, the Luzhniki has become known for hosting the 2018 FIFA World Cup’s opening and final matches. While the stadium used to be home to Spartak Moscow, it is now solely used by the Russian national team. Nonetheless, it has hosted a lot of other sporting events such as the Rugby World Cup Sevens and numerous track and field events.

For more stories such as this, follow the Russian Art and Culture Mag. You might want to check an upcoming exhibition titled “Time travel: daily life in the Soviet Union in the 60’s” at Rossotrudnichestvo, London on February 11. It will feature photographs from the archives of the Soviet intelligentsia, showing the daily lives of people in the suburban science town of Lytkarino and other places from the 1940s to the 1980s. There is a lot more to learn about Russia so go ahead and subscribe to Russian Art and Culture’s newsletter for more fascinating stories.