THIS WAS THE DULLEST Russian Auction Week anyone can remember…. Our International Editor Simon Hewitt presents a comprehensive overview of Russian art sales that have taken place in London earlier this June.

With Anglo-Russian relations at an all-time low, there had never been a less encouraging time to consign. A number of Moscow collectors stayed away because of visa difficulties, and auction attendance was down around 20%. Total sales slumped 41% from last November to £23.9m. So limp were the proceedings that none of the firms bothered to issue a post-sale press release.

With nothing major for Avant-Garde or Fabergé fans to get there teeth into, only two lots were expected to reach £1m: a late Shishkin at MacDougall’s, and an imposing pair of Imperial porcelain vases at Sotheby’s. Both failed, leaving an Alexander Yakovlev red chalk and charcoal drawing of a Dancer in Spanish Costume as the week’s highlight with a double-estimate £1.11m at Christie’s. Yakovlev also starred at Sotheby’s, where his 1922 Harlequin, in similar media, soared to £730,000. 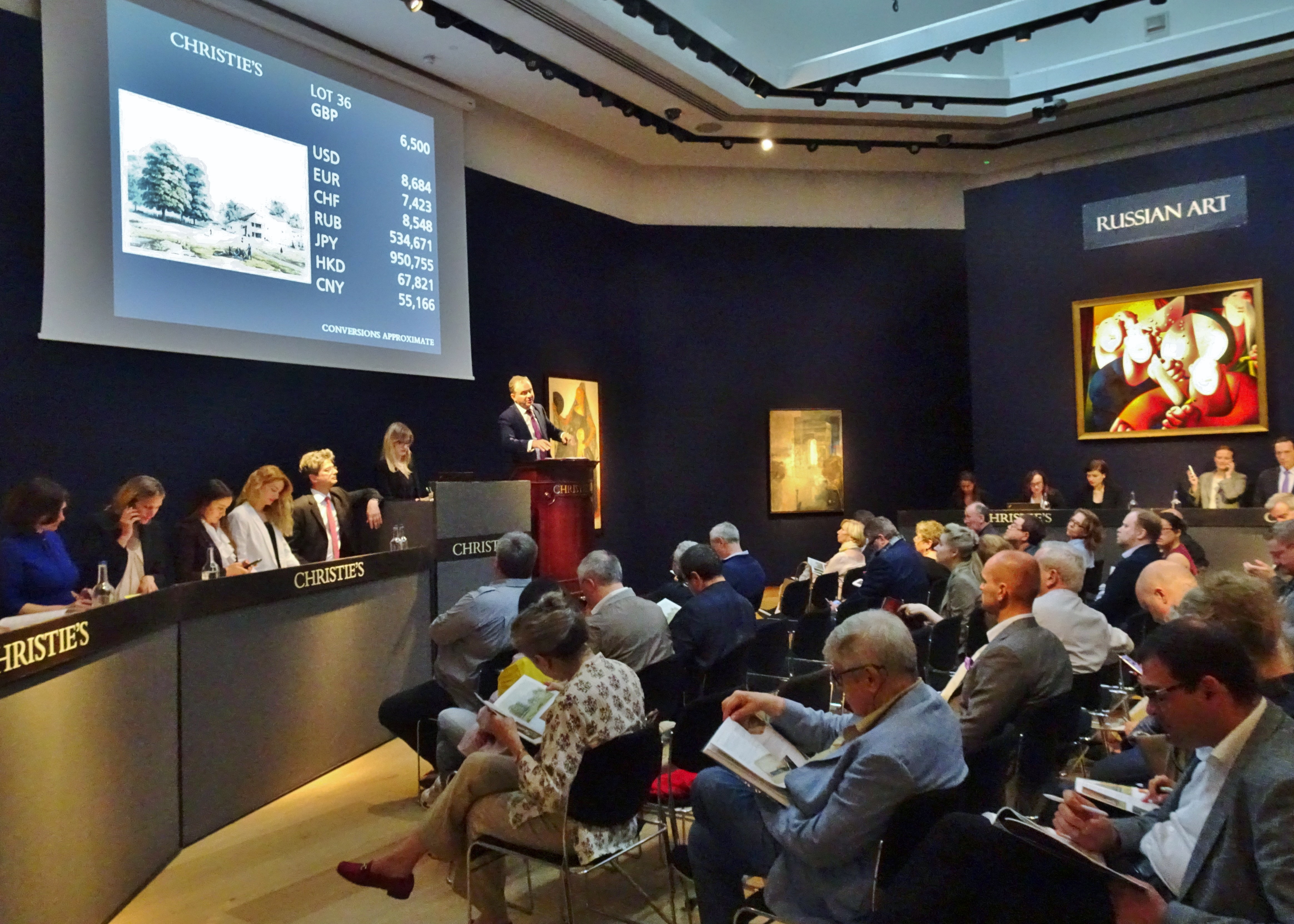 Christie’s sale began with a dozen works by Konstantin Somov, donated to his young friend Boris Snejkovsky and consigned by the latter’s descendants. A 1933 Somov Self-Portrait in pencil, crayon and red chalk impressed on £172,500, and his 1936 oil painting of Boris Snejkovsky in Profile rated £72,500.

Four works seen in recent years at TEFAF Maastricht (something the catalogue curiously failed to indicate), consigned by the same cashflow-conscious London dealer, sold in line with estimate: Yermilov’s Design for a Room in the Kharkov Palace of Pioneers (c.1934) at £50,000; Volkov’s Oriental Fantasy for £23,750; Larionov’s 1915 Jester Costume Design at  £18,750; and a Grigoriev drawing, Cabaret, at £10,625. 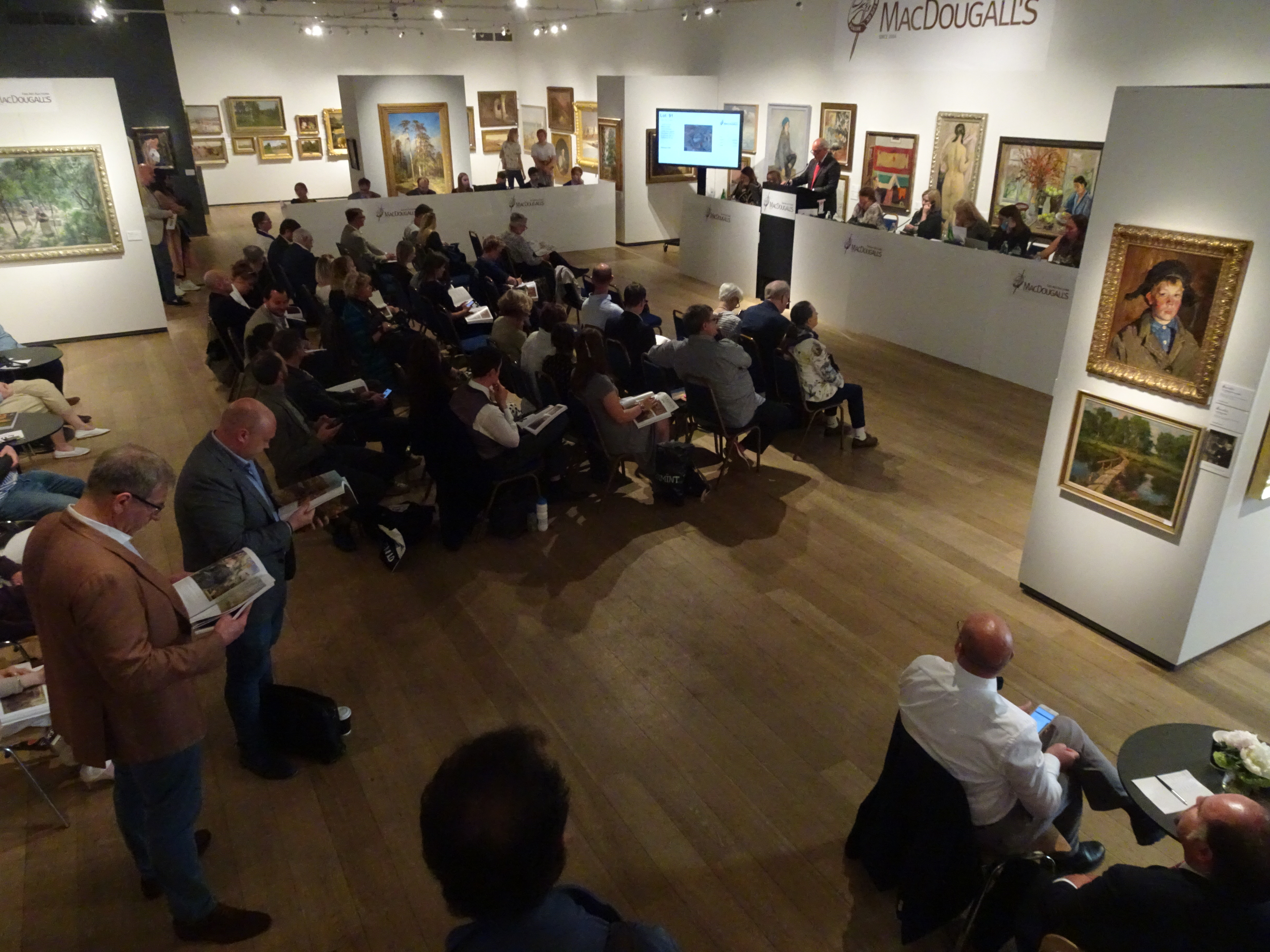 Bonhams sold Levitan’s 1888 Field of Rye for £68,750, but his later and more important Snowy Meadow remained on the block. 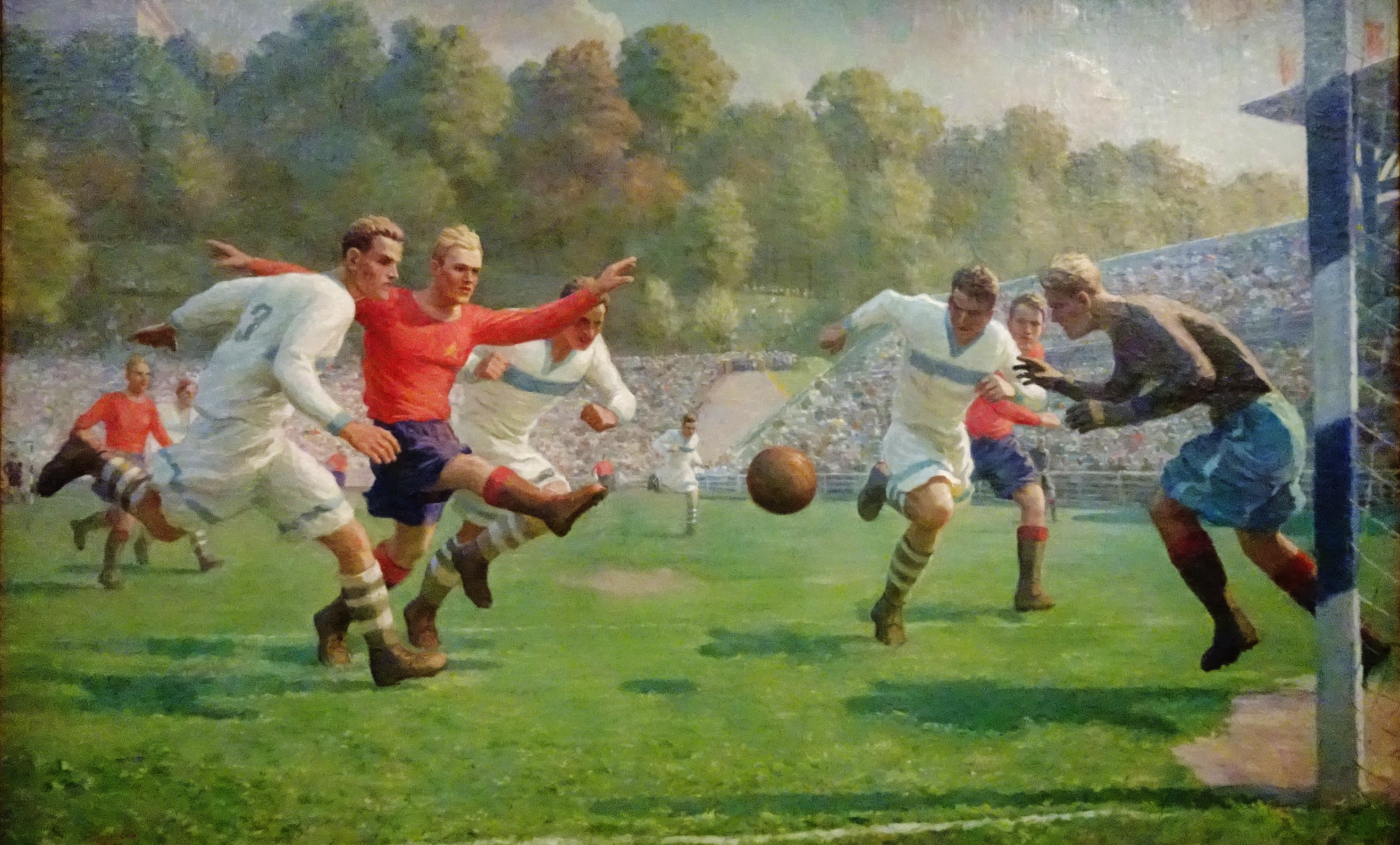 Andrei Korotkov’s 1949 Football Match, taking place (as the catalogue curiously failed to observe) at Dynamo Kiev’s quaint, tree-lined ground in central Kiev, exceeded hopes on £106,250 to become Sotheby’s top Soviet painting. At the insistence of artful Chelsea fan Lord Poltimore, keen to honour the Russian World Cup, Sotheby’s lined their staircase with a giant blow-up of this work for the pre-sale viewing. Rublev’s 1933 Relay Race was unsold, but Maximov’s Boats in a Chinese Port sailed to  £68,750 and two minor Popkovs claimed £15,000 apiece. 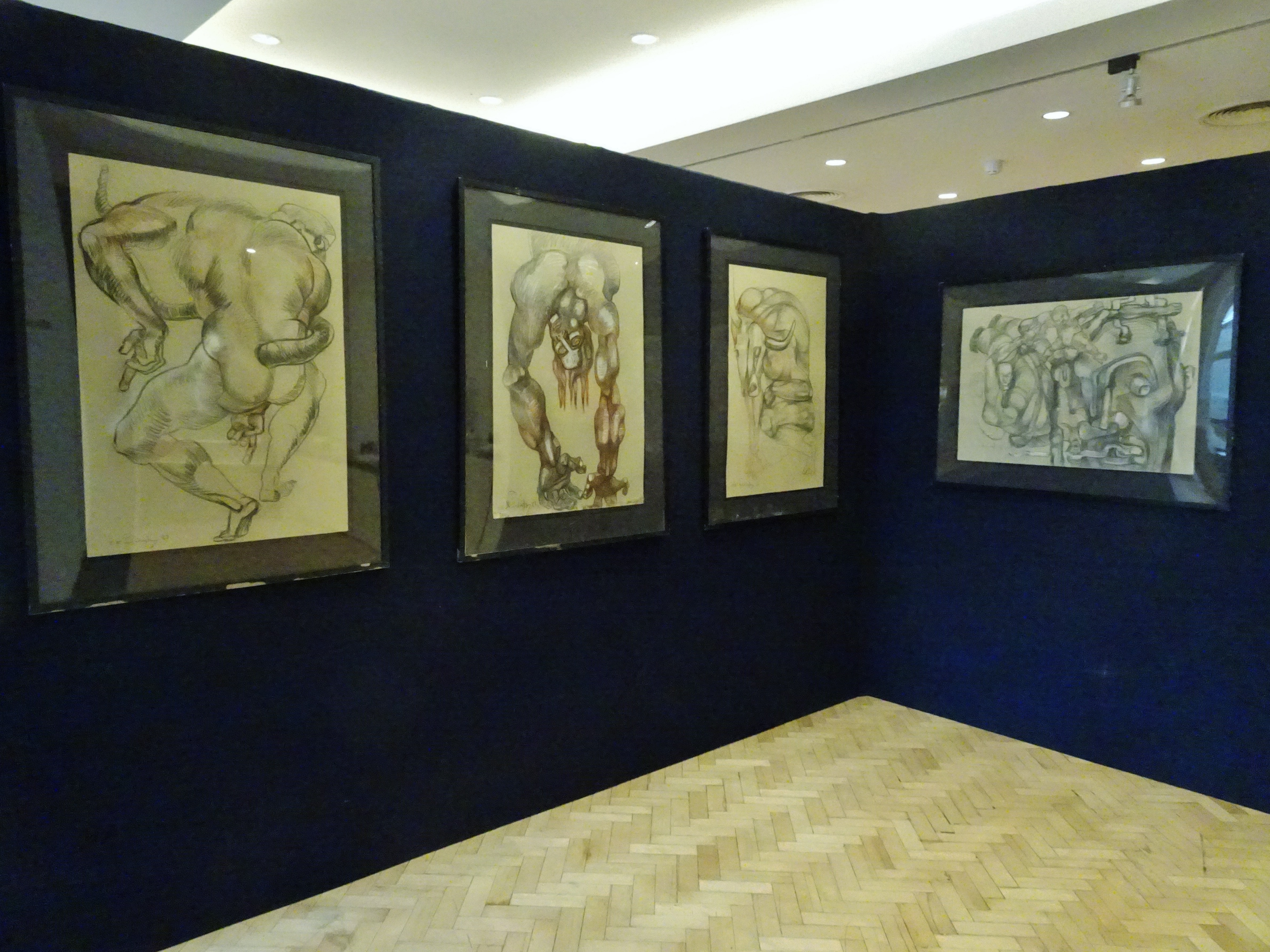 Contemporary highlight was a 1963 Tselkov Group Portrait with Watermelon that Igor Tsukanov snaffled for £187,500 at Christie’s.

‘I expected heavy bidding for this important and historic Tselkov painting’, — Igor told me afterwards. ‘I was prepared to bid much higher, but there was no strong competition. It was a very good deal as far as I am concerned!’

Tselkov was also contemporary top dog at MacDougall’s, where his 1974 Portrait of Maya Lugovskaya took £61,600. His smaller, 1978 Untitled in mixed media on card mustered £22,500 at Bonhams.

Works by Vladimir Ovchinnikov (1941-2015) graced two salerooms, with his son Misha – manager of the Fabergé Museum in St Petersburg – dispatching his glamorous assistant, Princess Sofia Grigoryeva, to keep an eye on things. She was delighted to see Vladimir’s Kazan Cathedral (1983) spin to a quadruple-estimate £43,750 at Sotheby’s. Over at MacDougall’s, Clearing Snow (1991) made £14,300 and Angel Behind A Telescope (2007) took £4680.

Another late-departed artist to figure prominently during Russian Week was Ernst Neizvestny (1925-2016). A set of 22 extraordinary drawings on the theme of Dante’s Inferno, in pencil and pastel on grey paper and dated 1987, tripled predictions with £20,000 at Bonhams – despite half of them being appallingly framed, and the other half not framed at all.

Christie’s, as usual, led the way here with a Sudbinin white marble bust of a Woman with Braided Hair that soared to £309,000, five times estimate, on the back of rumours that it portrayed Anna Akhmatova.

Despite the failure of their pair of monumental 1825 vases (est. £1-1.5m), Sotheby’s generated hefty prices for Imperial Porcelain, selling 129 pieces from the Banqueting Service of Grand Duke Alexander Alexandrovich (future Tsar Alexander III), divided into eleven lots, for a triple-estimate £272,500, and a set of Nicholas I flower-patterned Imperial Porcelain luncheon plates for £115,000.

MacDougall’s offered 84 pieces from the colourful Grand Duke Mikhail Pavlovich Service, made for Nicholas I’s younger brother, in 14 lots; all sold, for a combined £152,225.

Five Soviet Porcelain plates dated 1921, led by a Rudolf Vilde open-book design on £38,750, sold for over £25,000 at Sotheby’s – who recorded the week’s top Fabergé price of £200,000 for an 1897 rectangular gold and enamel box by Michael Perchin, its lid set with the diamond-studded cipher of Nicholas II.

Christie’s sold an earthenware Duck (1899-1908), with body by Moscow’s Stroganov School and silver mounts by Fabergé, for £150,000. A Fabergé Chimpanzee (c.1915), carved from agatized petrified wood, made £106,250 but an obsidian Sea-Lion and purpurin Rabbit were unsold. A Fabergé silver-framed St Nicholas icon, with the maker’s mark of Viktor Aaarne (St Petersburg 1899-1908), fetched a mid-estimate £52,000 at MacDougall’s.