Nicholas Roerich’s monumental painting “Pechory Monastery, Internal Exit from the Old Belfry”, considered lost for over 115 years, will appear at 15 October Russian art auction at MacDougall’s. The re-emergence of this masterpiece is a truly significant event for the Russian art market.

The work belongs to the famous “Architectural Series”, created by the artist during his trips across Russia in 1903-1904, organised by the Imperial Society for the Encouragement of Arts. It was after these trips that Roerich notes “It is time for a Russian educated person to discover and fall in love with Russia”. 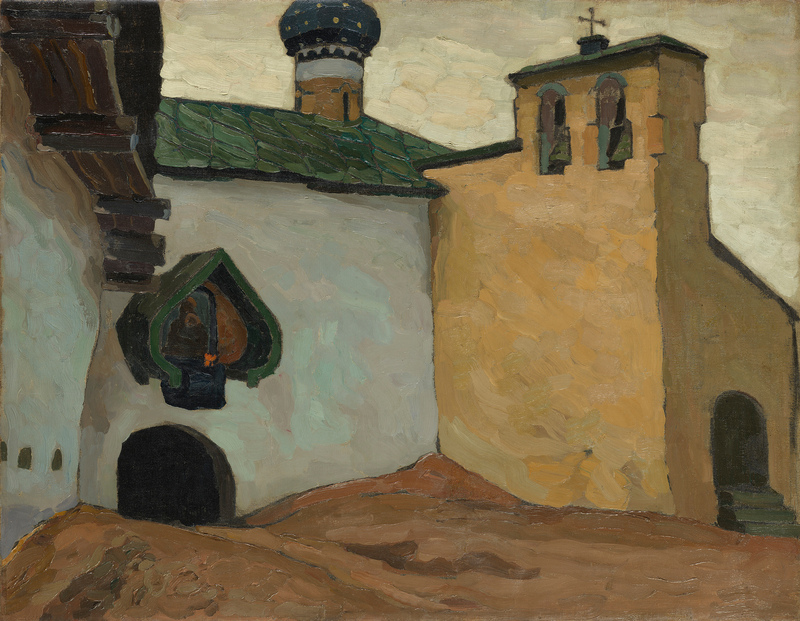 Since Roerich worked en plein air, most of the works he created during his travels are small sketches painted on plywood. The absolute uniqueness of “Pechory Monastery. Internal Exit from the Old Belfry” is that it is a large, fully accomplished oil painting on canvas.

This work by Roerich is not just one of the finest examples of the best Russian period of Roerich, but also a symbol of modern Russia entering its spiritual past. However, it’s fate was tragic.

After it was exhibited in St. Petersburg in 1904, Emperor Nicholas II gave the order to buy the painting for the Russian Museum. Both Russian and European art communities commented on the work with enthusiasm. It was reproduced in French (Roseau, Nicolas Constantinovitch Roerich, L’Art Decoratif, No. 86, November 1905, p. 175) and Russian press (S. Makovsky, Svyatyni nashei stariny (Po povodu etudov N. Rerikha), Zhurnal dlya vsekh, No. 6, June 1904, p. 355).

Roerich, who dreamed of world fame, decided to first send the canvas to exhibitions in London and Paris and only after that transfer the work to the Russian Museum. Soon, he was given the opportunity to participate in a larger project – the St. Louis World Exhibition of 1904 in USA. Many other outstanding Russian artists, such as Klavdy Lebedev and Petr Petrovichev, took part in that exhibition along with Roerich.

However, the painting was never returned from the United States because of the fraud of the organiser of the exhibition, E. Grunwaldt, who secretly sold the paintings of the Russian artists and embezzled the money. Roerich repeatedly and unsuccessfully tried to return “Pechory Monastery. Internal Exit from the Old Belfry to Russia”. The painting disappeared out of collectors and museums sight for over 115 years. Until now.

Catherine MacDougall, Director of MacDougall’s commented: “We very much hope that after a century of troubles, Roerich masterpiece Pechory Monastery, Internal Exit from the Old Belfry, will find a place in a museum or other significant collection”.