Lithographic Legacy on the Neva – A Century-Long Journey

Petersburg shall be empty – screamed Tsarina Evdokia Lopukhina as she was banished to Suzdal’s Intercession Convent by Peter the Great, her husband. These ominous words and the ‘Petersburg Myth’ came to mind earlier this year when pacing the city’s quarantine-induced vacant streets. St. Petersburg suddenly echoed the supernatural, theatrical, and sparsely populated images created by early 20th century World of Art and Symbolist artists. Aleksandr Benois (1870-1960), Mstislav Dobuzhinsky (1875-1957), Anna Ostroumova-Lebedeva (1871-1955) and Pavel Shillingovsky (1881-1942) defined a ‘Petersburg Myth’ and infused the city’s printmaking school with the resilience, principles, and vitality to outlast the Soviet Union, and continue to thrive today.

Crucially, the legacy navigated the challenging 1990s, thanks to artists and printmaking technicians, who continued to create, as the ‘Communist Myth’ crumbled and the ‘Petersburg Myth’ was renewed.  During this period, one important lithographic treasure trove was Andrei Gennadiev’s studio, then located just off Nevsky Prospect near Millionaya Ulitsa. Andrei Gennadiev (b. 1947) superbly captures the city’s myths. He was an active participant in the 1970s’ ground-breaking Leningrad Non-Conformist Art exhibitions. Andrei traces his metaphysical, mystical, and ‘Petersburg Myth’ style to the fact he grew up on Millionaya Ulitsa a stone’s throw from the Hermitage and Russian Museums, surrounded by the city’s opulent architecture. He also credits the impact of a life-changing encounter with Mihail Chemiakin. Mihail Chemiakin (b. 1943) is a charismatic figure on the St. Peterburg art scene, and familiar to Russian art collectors and art market watchers. Among other achievements, Mihail organised the daring and infamous 1964 exhibition of Non-Conformist works at the State Hermitage Museum. The event led to the museum director’s sacking. 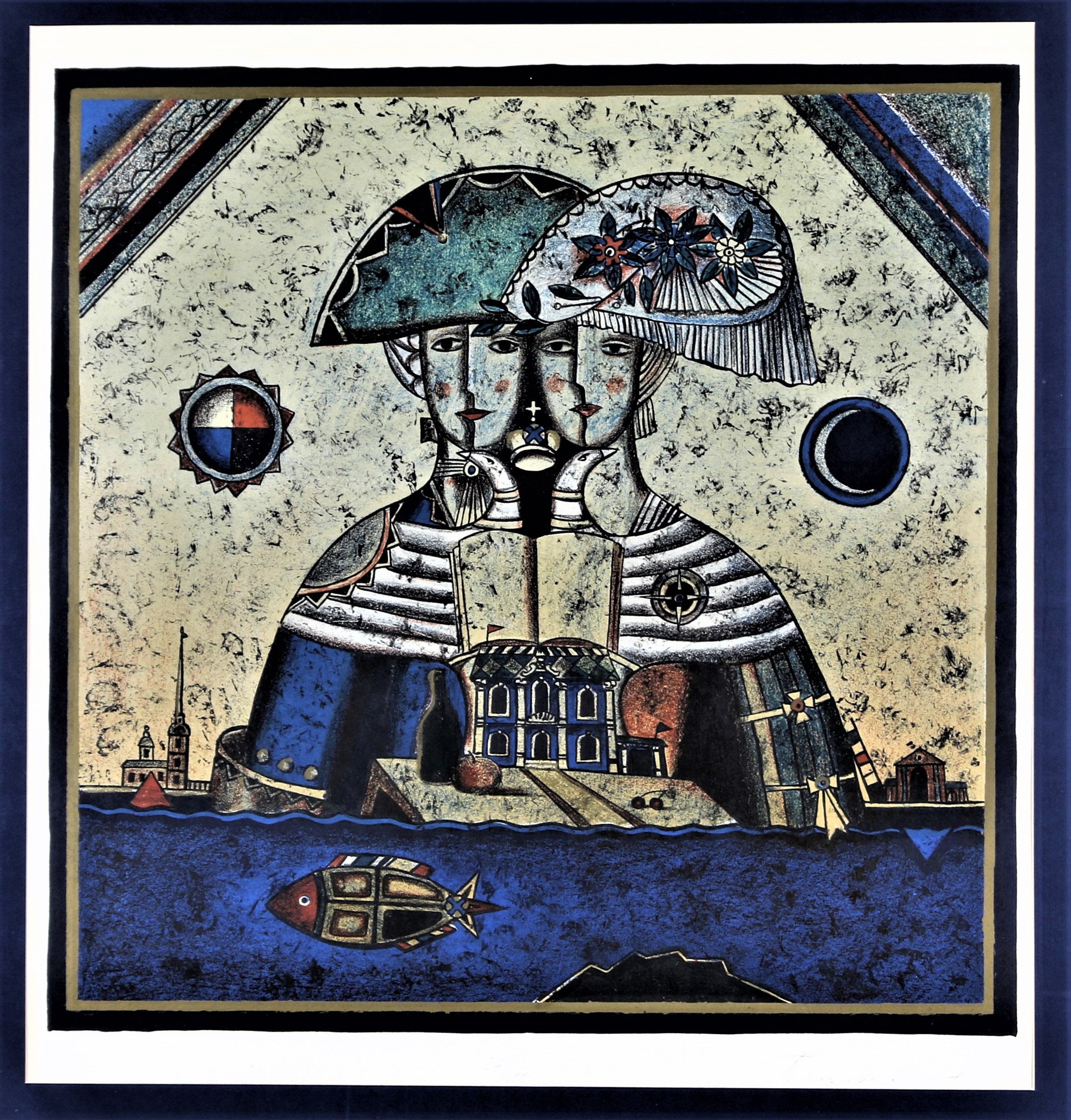 During the early 1990s, Gennadiev’s studio was a creative and community meeting place.  Regardless the hour, while apprentices worked on a massive Gobelin-type tapestry with his signature piscatorial motif, another troika may be sitting around a table singing and celebrating, as invited visitors explored his latest creations. The artist’s colossal lithography portfolio revealed striking, boldly-coloured images unifying symbolism, humour, and literary elements. One prize work is entitled, Svadba [Wedding], first completed in the 1980s. It is a charming allegorical piece, naturally including his ubiquitous fish. The ‘Petersburg Myth’ is embodied by an elegantly attired couple fused against an outline of the Peter and Paul Fortress, as the city’s symbol. A stylised Menshikov Palace entrance-gate and double-headed eagle are emblazoned across their chests.  Before them is a celebratory table with wine and fruit, though with the Neva waters visibly rising, approaching guests need to be wary of flooding. Perhaps, the couple would rather be alone, so that ‘Petersburg shall be empty’ just for them.

Gennadiev created his lithographs, including Svadba, at a printmaking workshop located at No. 16 Pesochnaya Naberezhnaya in the city’s Petrograd district. Gennadiev worked at the facility, officially called Leningrad Experimental Graphics Laboratory (LEGL) from 1977 until it closed. Founded in 1933, after the government disbanded artistic groups in an effort to harness creative energies towards formation of a ‘Soviet culture’, LEGL existed under various names for over half a century, until it shut around 1996. It played a crucial role in the transfer of the city’s World of Art and Symbolist printmaking legacies to subsequent generations. World of Art, Symbolist, Parisian school, and Western modernism devotees worked there, side-by-side. Over time, LEGL attracted ‘contrarians’, who valued Western European art and had an affinity for forbidden Russian traditional, and avant-garde trends. It was, thus, a refuge for artists whose creativity did not conform to prevailing Socialist Realist canons. Among the many artists flourishing at LEGL was Grigori Izrailevich (1924-1999), who arrived there in the 1960s, over a decade before Andrei Gennadiev. In his memoires, Izrailevich recalls fondly, “The Workshop was a remarkable place in our artistic life, where freedom reigned in everything even during the darkest times, which is why it was called ‘experimental’….”

In 1961, thanks to events organised by the London gallerist, Eric Estorick (1913-1993), Izrailevich’s works, along with prints by twenty-six other LEGL artists, debuted to enthusiastic London and New York viewers. Grigori’s mesmerising depictions of owls, evoking both lithographic mastery and the ‘Petersburg Myth’, featured in London art magazines and were acquired by museum collections, including the National Gallery in Washington, DC. 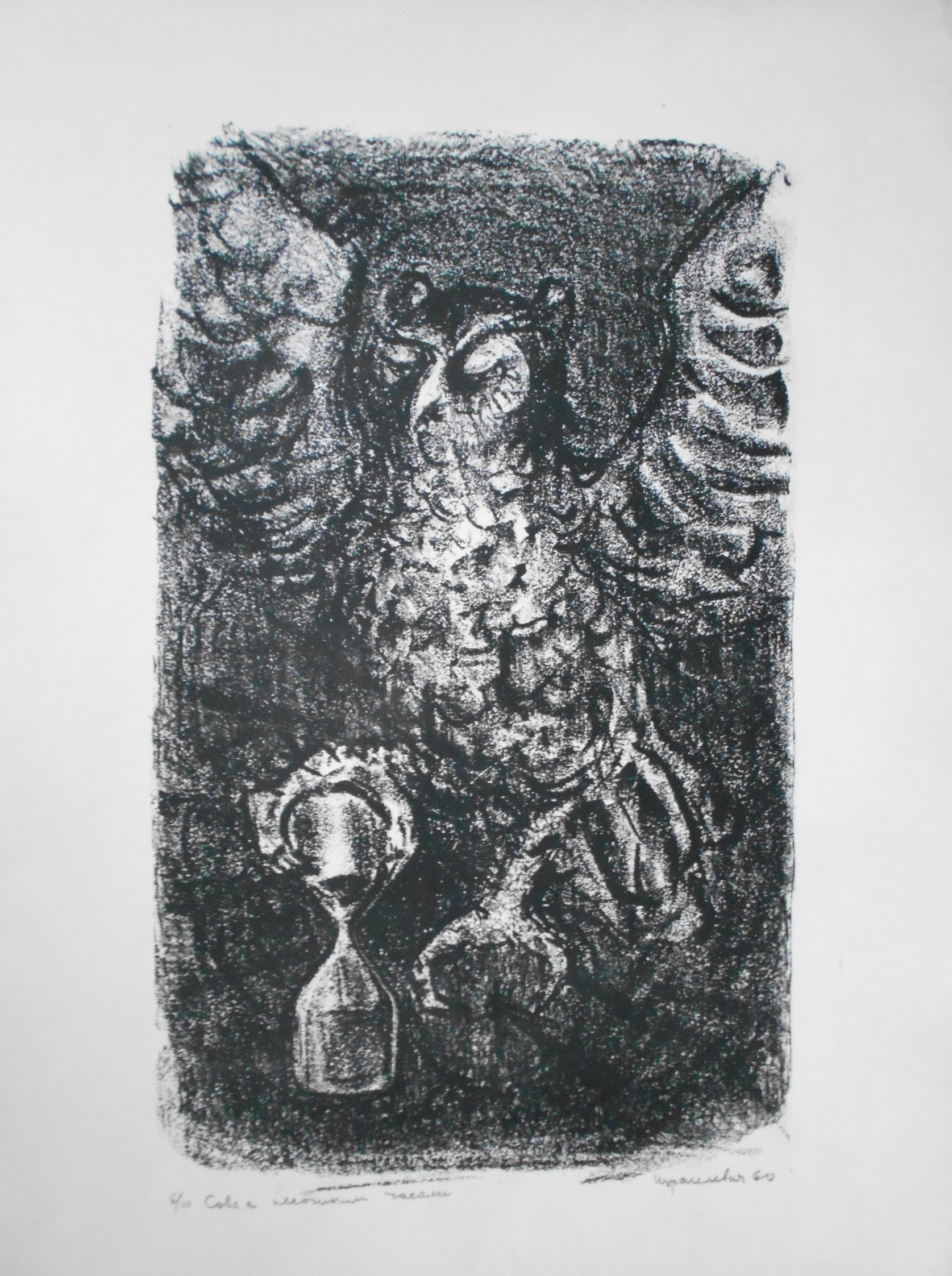 It is notable that an outsider, Eric Estorick with his entrepreneurial and marketing flair, managed to identify ‘Leningrad lithography’ as unique and universally appealing for international audiences. He prompted the first acquisitions of Soviet works outside the USSR, during a time when Western audiences expected non-commercial, pristine, government-curated presentations of Soviet and Russian art. Instead of stereotypical Socialist Realist portraits of factory workers and tractor drivers, Estorick widely shared his serendipitous discovery of images embodying the city’s sophisticated, feisty and experimental artistic traditions, evoking Cézanne, Malevich, Marquet, Matisse, and Modigliani. In November 2019, to commemorate this pioneering gallerist, and to introduce these Leningrad artists to new audiences, the Estorick Collection of Modern Italian Art in London hosted the exhibition, Lithography from Leningrad: Eric Estorick’s Adventure in Soviet Art.

Cold War-era travel restrictions did not permit the artists to witness their international triumph firsthand in the 1960s. Nonetheless, Estorick’s focused efforts delivered tangible benefits to invigorate the Leningrad artistic community and printmaking school through the foreign press reviews extolling the LEGL as a trailblazer, as well as the several acquisitions by prominent museum and private collections. Back in the USSR, the positive recognition reverberated, significantly, inside the Union of Artists. There it was no secret; graphics and prints stood below painting in the artistic ‘Tabel’ o rangakh’ [Table of ranks] hierarchy.  Estorick proved that ‘Leningrad lithography’ was a distinct phenomenon on the city’s artistic landscape. Although, it took Soviet art historians and curators some time to acknowledge his verdict. The first LEGL group exhibition at the State Russian Museum took place in the 1980s, over twenty years after Estorick’s Grosvenor Gallery exhibitions.

The Workshop operated at Pesochnaya Naberezhnaya from 1963 until around 1996. In 1978, serendipitously for the city’s printmaking heritage and longevity, Aleksei Valentinovich Baranov Sr (b. 1958), secured a job at the enterprise as a printmaking technician, or ‘pechatnik’, following his army service. By then, LEGL had become the ‘Printing Workshop under RSFSR Graphic Arts Enterprise’.  Baranov Sr subsequently managed the Workshop’s operations for almost twenty years. 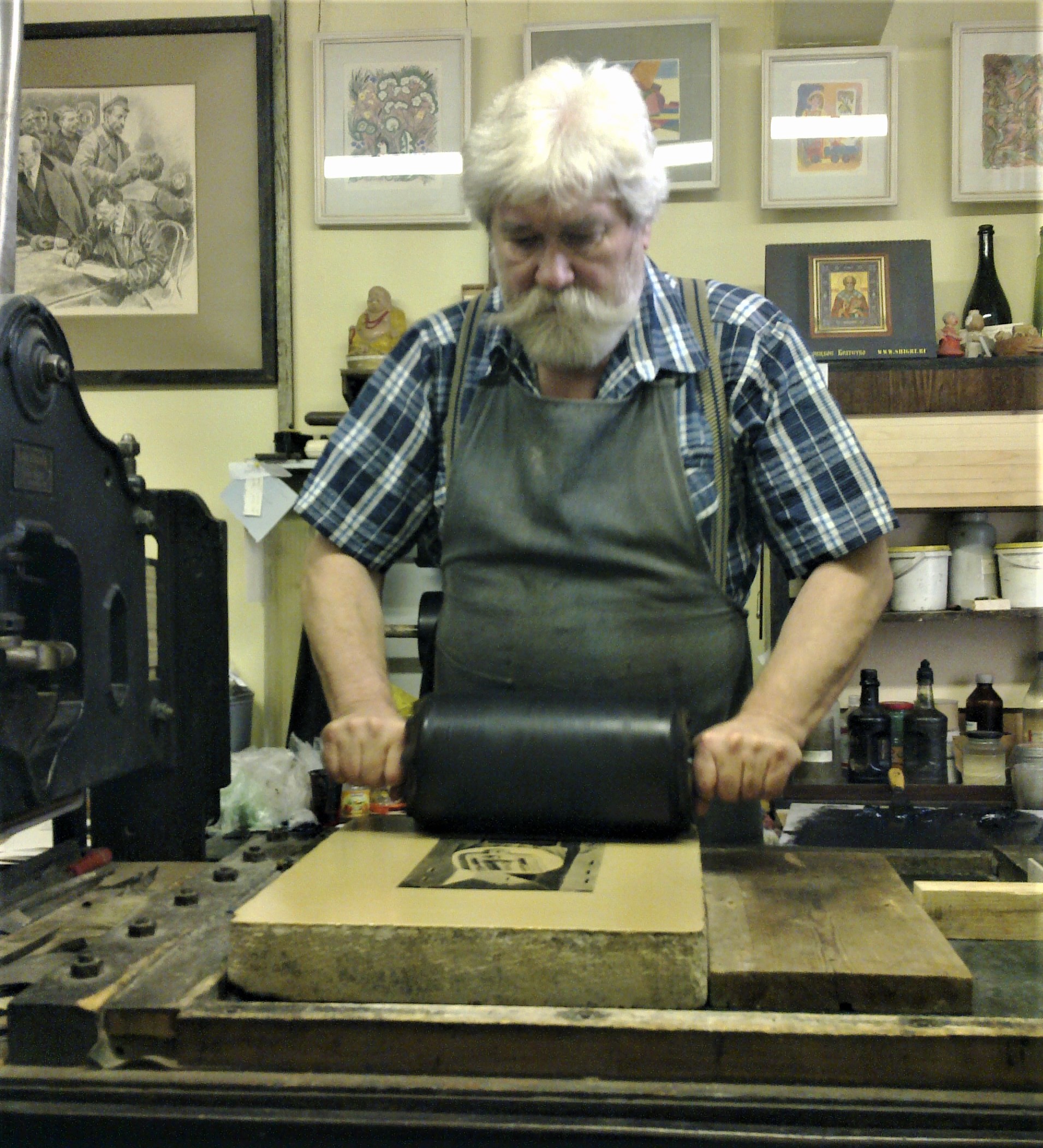 In 1991, the city’s name change prompted ‘Leningrad lithography’ to evolve definitively into ‘St Petersburg lithography’. Economic restructuring, after the workshop at Pesochnaya Naberezhnaya closed, guided Baranov Sr to found his own enterprise, Masterskaya Pechatnoi Grafiki, in the early 2000s. Originally, it served as a teaching studio at the St. Petersburg Decorative and Applied Art Institute’s Graphics Department. In 2013, its operational scope broadened to offer creative space for artists. His son, Aleksei Baranov Jr, assumed daily management. A leading representative of the next printmaking generation in St. Petersburg, Baranov Jr brings continuity to earlier practitioners and traditions. Using the studio’s antique ‘Berlin’ presses, he mastered classic flat-printing, as well as techniques developed over the last century. While in the spirit of predecessor LEGL, Baranov Jr also explores experimental procedures and production methods to assimilate novel trends and technologies into artists’ works. 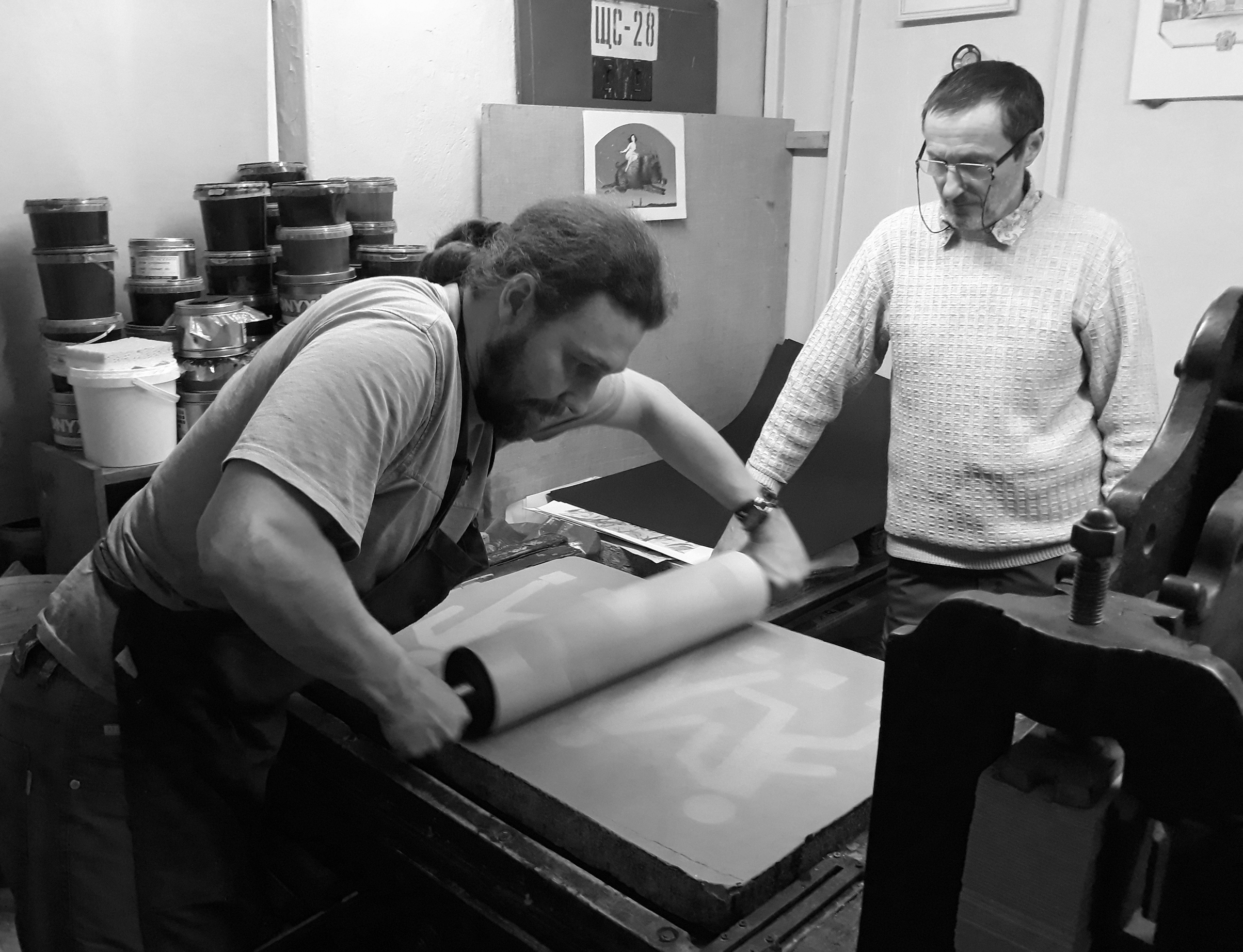 Today, Masterskaya Pechatnoi Grafiki facilitates printmaking for both novice and established artists from Russia, and abroad. In 2019, Art for Guernsey, a charitable initiative launched by Guernsey art collector, David Ummels, began a collaboration, in the spirit of Estorick’s earlier cultural diplomacy.  There are also several other on-going projects underway.  Many works may be viewed via Instagram @litograf.spb, and Facebook @grafika.spb. Undeniably, the ‘Petersburg Myth’ is alive and well, flourishing and evolving to capture St. Petersburg’s enchanting beauty via paper, ink, and stone. In particular, works created with the Baranovs by artists Aleksandr Fedorov, Oleg Mikhailov, Valery Mishin, Anna Perekhodko, Olga Vasilieva, and Boris Zabirokhin represent the city’s enduring graphic arts heritage. 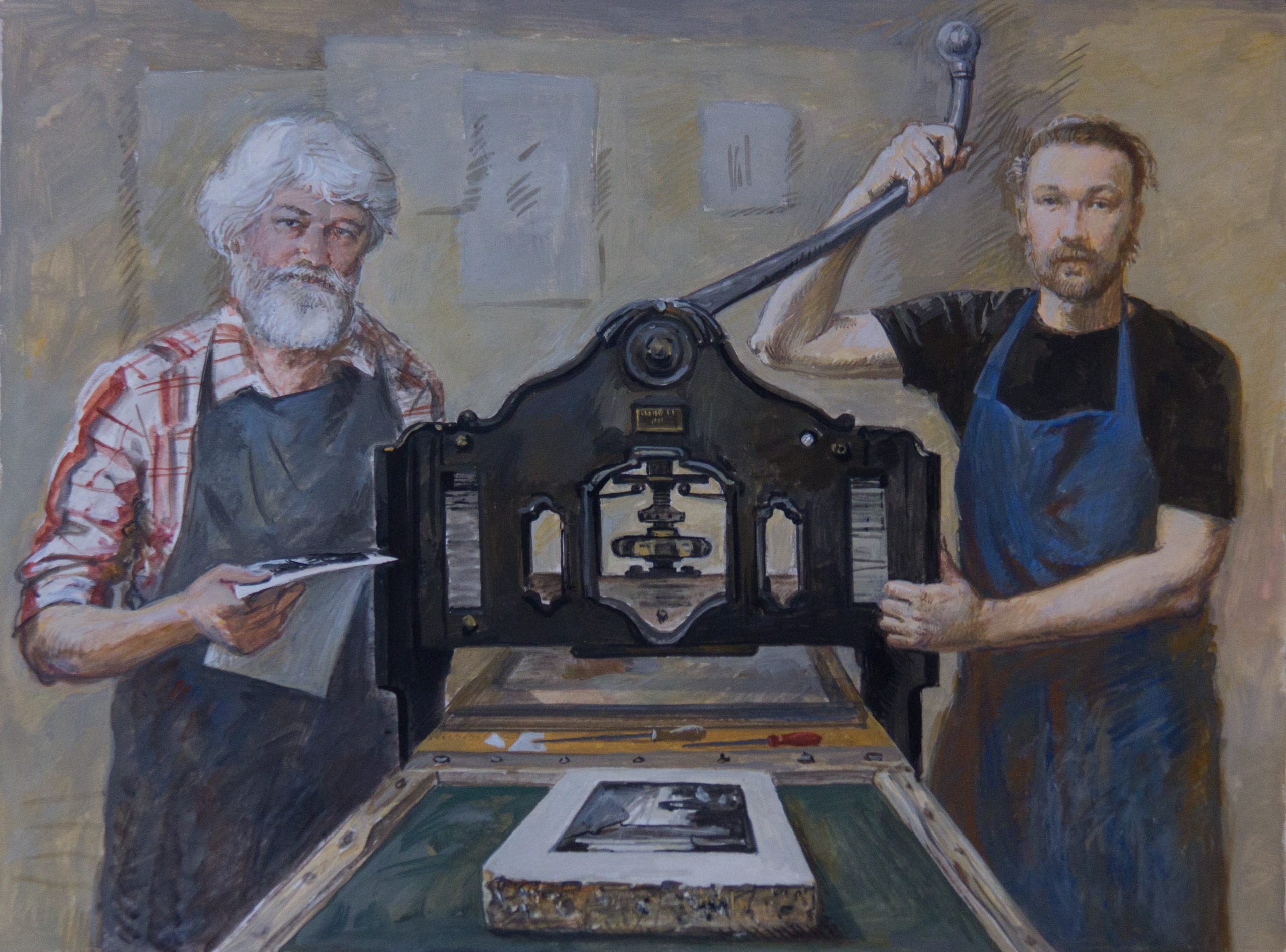 Masterskaya Pechatnoi Grafiki and Eurasian Galleries will host a 10-day study programme ‘Set in Stone’ in May 2021 (TBC), and invite artists, as well as Russian art and print aficionados, to learn about graphic printing techniques, the history and traditions, as well as the St. Petersburg cultural influences that inspired and continue to inspire artists working in this medium. Hopefully, “Petersburg shall not* have to be empty” and it will be possible to welcome participants in person in the magnificent Venice of the North. Otherwise, the unique curriculum with be presented via virtual metaphysical reality – on-line.

A comprehensive history of the city’s printmaking school, splendidly illustrated and meticulously researched by Nikolai Kononikhin, Leningrad Lithography: A Century-Long Journey, will be published (in Russian and English) in early 2021 by the Frants Art Foundation.