THE LAST TWO ‘RUSSIAN AVANT-GARDE EXHIBITIONS’ I reported on turned out to be not very Avant-Garde at all: a show in Mantua in 2013 (which had at least a handful of works that might have been authentic), and the infamous Toporovsky Collection in Ghent (which had none at all, and cost Museum Director Catherine de Zegher her job). So it was a relief to arrive in darkest Liechtenstein – after an hour’s train from Zurich, then 40 minutes on a bus from Sargans – and find a hallful of decent caboodle, awash with colour and stylishly displayed, supplied by the great Kensington Collector Vladimir Tsarenkov.

Kunstmuseum Liechtenstein would not look out of place on Berlin’s Potsdamer Platz: an anthracite blockhaus that, beneath the Prince’s medieval castle atop its rocky crag, squashes central Vaduz – a cute little town the size of Blandford Forum – underfoot. The Museum’s colossal, windowless, rectangular halls are chillingly, clinically white. Bringing them to life is no easy task. The Tsarenkov show does so with some outstanding works of art – and with the help of a partition that splits the hall into less minion-crushing proportions. 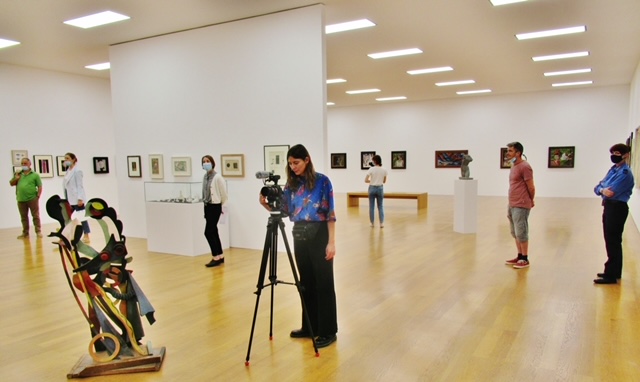 “Russian Avant-Garde from the Tsarenkov Collection”. Photo by Simon Hewitt

Each of the show’s six walls has a theme. The first wall, to the right as you enter, is devoted to the Jack of Diamonds. The far wall is the preserve of Goncharova and Larionov. Then comes a wall dominated by geometric works. The near wall, devoted to Baranoff-Rossine, faces a partition smothered with Malevich. The other side of the partition hosts David Yakerson. A handful of sculptures are dotted around.

Two of them are brightly painted wooden figures by Baranoff-Rossine, positioned in front of his psychedelic paintings. The largest of these, Nymphs & Centaurs (1914), features interlocking concentric circles redolent of Sonia Delaunay – who, like Baranoff, was based at La Ruche in Paris before World War One. There are seven Baranoffs in all, one of them a startling Counter-Relief from 1916/17. The Kunstmuseum’s wide open spaces offer a stimulating contrast to the intimate, black-walled St Petersburg Gallery on Cork Street where several of them were displayed in 2013. 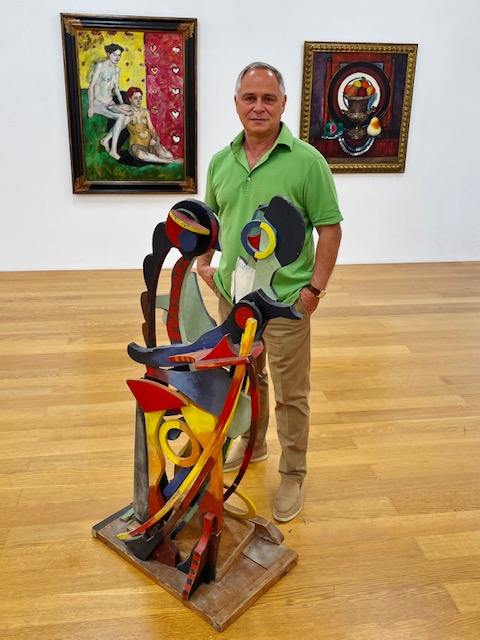 TSAR VLADIMIR – BEHIND A BARANOFF, BETWEEN TWO MASHKOVS. @Simon Hewitt

The Jack of Diamonds wall at the Kunstmuseum is lent equal visual punch by the strident figures of Mashkov, Lentulov, Konchalovsky and David Burliuk. Lentulov’s 1913 Portrait of Sergei Lobachov (youthful patron of the Jack of Diamonds) is an atypical but accomplished work by the master of tutti frutti onion-domes. Burliuk’s Night Rider (c.1911) catches the eye with its surface of rough jute. The work nearest the entrance, however, is out of place: a 1922 Mashkov Still Life with Pear that post-dates the Jack of Diamonds by over a decade. Mashkov’s pair of Female Nudes (1908), next door, have superior pedigree.

Representing artists by a couple of works is a curious tendency of the exhibition, and recurs further along the wall with first Burliuk, then Alexander Deineka. It’s always good to see Deineka brought to the attention of a Western audience, but to find him in a show devoted to the Avant-Garde is disconcerting – even if, with their flattened perspective, his early works are among the most innovative in 20th century art. 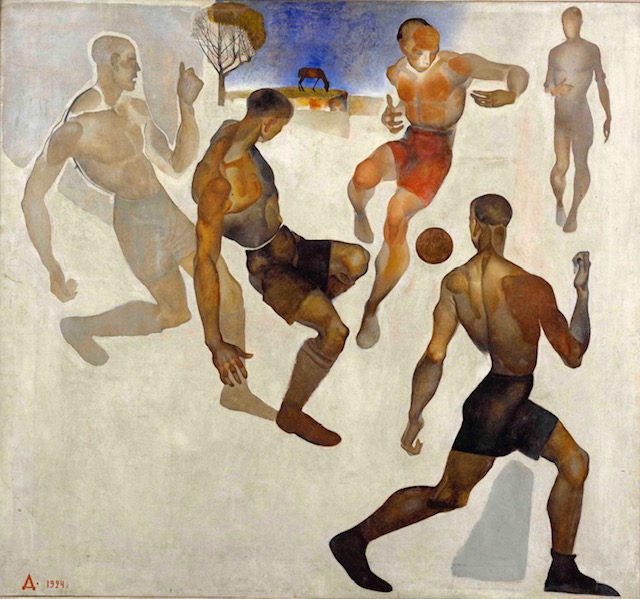 His Footballers (1924) on show here anticipate the two-tiered composition of Deineka’s most famous work, his 1928 Defence of Petrograd – which just about justifies their presence in Vaduz. A whole exhibition could be devoted to whether, before the onset of Socialist Realism in the early 1930s, Deineka deserves the accolade of Avant-Garde or whether – like the writings of Ilf & Petrov – his 1920s paintings epitomize the short-lived era of post-Lenin, pre-Stalin freedom associated with the New Economic Policy.

Deineka adapted to changing political circumstance so adroitly that in 1935 (again like Ilf & Petrov) he was granted permission to visit the United States, where he produced stylized sketches of skyscrapers that evoke Malevich architectrons. None of these sketches have made it to Vaduz – unlike an unduly large close-up of two Baseballers that is not so much Avant-Garde as sloppily painted Kitsch, of note solely for the batter’s hands, which (a) are the wrong way round, and (b) would be re-used by Deineka for the giant, grenade-wielding hero of his 1942 Defence of Sevastopol. 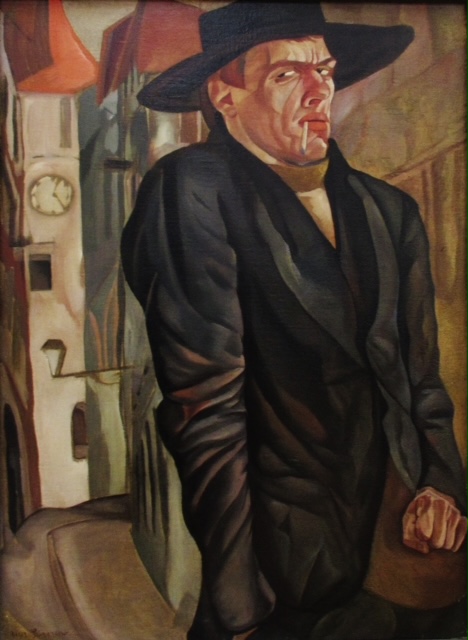 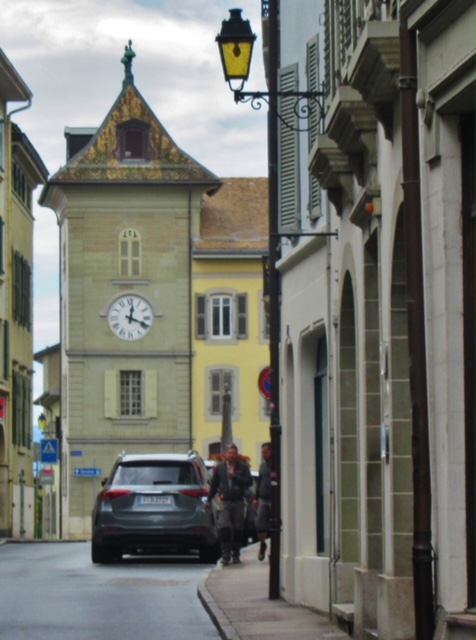 It seems a little incongruous to find Deineka’s Baseballers next to a couple of works by Boris Grigoriev painted nearly two decades earlier (few exhibition visitors are likely to be aware of the stylistic similarities between Deineka’s youthful portraits and Grigoriev’s). A 1916 Self-Portrait with Cigarette is an arresting work, and it would be nice to know in which narrow-streeted, red-roofed, Central European town Grigoriev was unleashing his Mayakovsky scowl (strikes me the setting is inspired by Grand-Rue in Nyon, Switzerland). Come to think of it – with the fag, the scowl and the black hat – the figure looks like Mayakovsky as well, so maybe isn’t a self-portrait after all.

The best of the three Goncharovas is her Rayonist Oarsmen from 1912 (below); the best of the three Larionovs his quasi-abstract City By Night (1912-14). The next wall starts with a Rayonist Composition (1914) by Alexander Bogomazov. Good to find this glittering but under-rated Ukrainian artist in such elevated Avant-Garde company. The implied correlation between Larionov, Bogomazov and Rayonist Abstraction is thought-provoking, but would be more evident if City By Night and Rayonist Composition were hung side-by-side rather than round the corner – and if the Bogomazov were shown inside the thick black frame it had when shown by James Butterwick at Maastricht in 2016. The silver frame in Vaduz lessens its impact.

The geometric works that take over from the Bogomazov, authored by Popova, Vesnin, Kliun and Chashnik, cover the years 1916-26. The largest, at 107 x 90cm, is a Colour Composition by Alexander Vesnin, probably the least familiar artist among the four. The deftest, a 1917 gouache-on-paper Composition by Liubov Popova, has the feel of an origami Chinaman, anticipating Matisse’s famous cut-out paper Snail by over 40 years.

A small, square, oil-on-panel Suprematist Composition by Ivan Kliun (c.1922) involves a white circle with blurred edges on overlapping Black-and-Tan diagonals. The colour scheme probably doesn’t pay homage to the constables appointed in 1920 to fight Irish Independence, but the blurred circle may pay homage to the optical experiments of Olga Rozanova in 1917 – culminating in her slightly fuzzy Green Stripe, arguably the greatest of all Minimalist paintings. 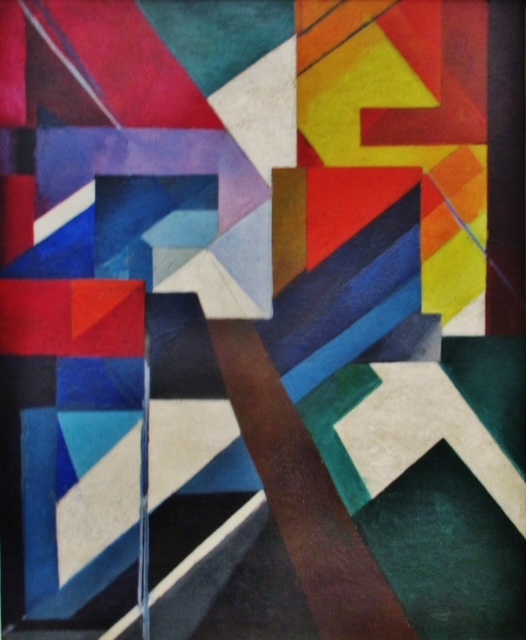 Connecting the austere geometrics on the side-wall to the coloured exuberance of Baranoff-Rossine on the back-wall can have been no easy curatorial task. The aesthetic gap is breached by Exter, Matyushin and Jawlensky – the lynch-pin being an aggressively geometric, kaleidoscopically coloured Exter from 1921 (above). It is again a case, here, of two-by-two, à la Noah’s Ark. The second Exter is a clumsy still life from 1913. Matyushin’s Abstract Composition (1919) embodies his pioneering, take-no-prisoners approach to colour-contrast; his diddy canvas from 1912, speculatively entitled Trees In Blossom, looks like a quirky experiment in brush-wiping.

A Woman with Head Bandage (1909) by Alexei Jawlensky is more important than his Flowers in a Vase from 1918, which could almost have been daubed by his friend and contemporary Emil Nolde. It’s nice to look at Jawlenskys that aren’t stylized heads, but it would have been even nicer to have a Filonov or a Petrov-Vodkin instead of a second Jawlensky – and an Elena Guro instead of a second Matyushin. 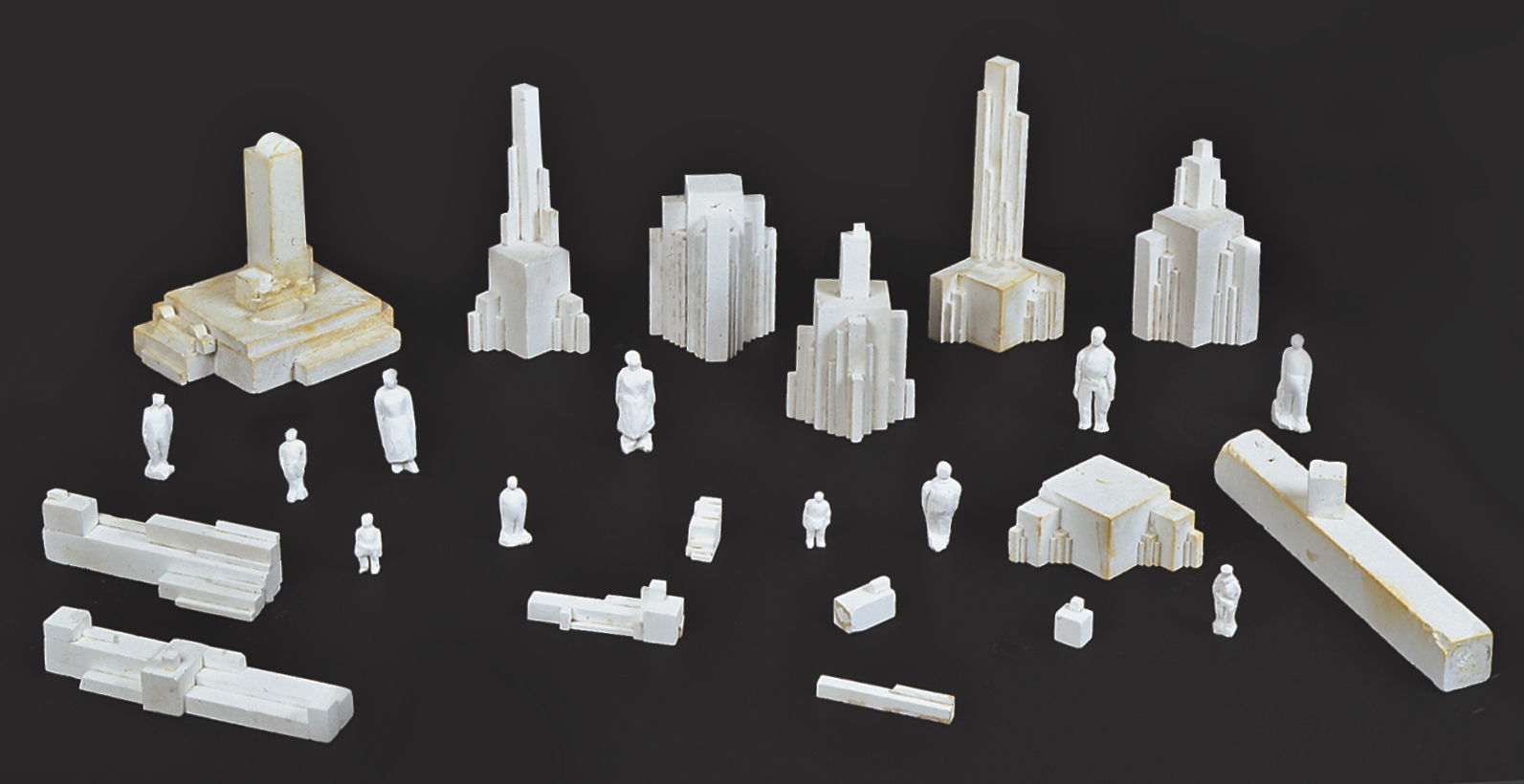 The Malevich wall features three small, early Figurative works from before 1910; two small paper sketches; and a glass cabinet containing 11 figurines and 15 architectons made from plaster (above). Tsarenkov obtained these from Malevich’s descendants, and considers them among the jewels of his collection (the much larger architectons presented at Tate Modern’s Malevich show in 2014 were reconstitutions produced in the late 1980s).

Another highlight is an ensemble of 13 works by David Yakerson: ten on paper (monochrome except for two works in paint) and three sculptures.

If you want to know anything about the sensationally gifted Yakerson (1896-1947), other than that he came from Vitebsk and taught at Chagall’s school, you won’t find it in the catalogue (where his Cubist-Suprematist Composition is curiously reproduced horizontally, despite being hung vertically) but in Alexandra Shatskikh’s extensively researched, superbly illustrated Vitebsk – The Life of Art, published by Yale University Press in 2007 (that said, knowledge of Yakerson’s career remains scant).

Fronting the Yakerson display (above left) is his 51cm high plaster model for a 1920 monument to the Socialist martyr Karl Liebknecht (executed in January 1919, when the Spartacist Uprising was crushed in Berlin). The full-size monument (above right) – which has sadly not survived – was chiselled from half-set cement, a technique pioneered by Paris sculptor Joseph Bernard, whose Vitebsk-born assistant Oskar Meshchaninov had a brother married to Yakerson’s sister. The extraordinary asymmetric pedestal inspired the base for Sergei Evseyev’s statue of Lenin outside St Petersburg’s Finland Station, designed in 1925 by the architectural partners Vladimir Shchuko & Vladimir Helfreich (best known for their constructivist Drama Theatre in Rostov-on-Don).

The other Yakerson sculptures are also from 1920, and in painted plaster: a  Standing Nude 75cm tall, and a smaller, aggressively angular Cubist-Suprematist Figure that looks like a design for a café waitress at Prague’s U Černé Matky Boží (House of the Black Madonna).

Three more sculptures complete the show. One is a startling concoction made from iron, wood and a glass rod by Vladimir Stenberg in 1920, when he was 21. The other two are by Alexander Arkhipenko: a bronze Femme Penchée (c.1911), and a marble Turning Torso (1922). It’s a pity the early bronze is not placed closer to the Bogomazov painting: he and Arkhipenko were rebellious art school buddies in Kiev. In fact, no fewer than six of the artists in the show were Ukrainian (Malevich, Exter, Burliuk and Baranoff-Rossine being the others).

The 63 works constitute a generous permanent loan from Vladimir Tsarenkov to the Liechtenstein Museum, where they are complemented by a reconstruction of Rodchenko’s Worker’s Club, installed in 2015, and early20th century art West European art from the Hilti Art Foundation. The Liechtenstein Museum has previously staged exhibitions devoted to Chashnik’s Suprematist Lexicon (2013) and Malevich’s Black Square (2018).

Tsarenkov’s loan, however, concerns only part of his collection – which was shown in full in another offbeat venue, Chemnitz (ex-Karl Marx Stadt) in east Germany, in Winter 2016/17. That show also contained The Tsar’s extensive collection of Soviet Porcelain, and was accompanied by a more substantial catalogue than the lightweight effort available in Vaduz (which lacks data about provenance and exhibition history). Tsarenkov began to acquire works of the Russian Avant-Garde in the early 1980s; a number were shown at the Musée de Montmartre in Paris in 2002, and several at TEFAF Maastricht in 2015/16.