LEONID DESYATNIKOV AT THE BARBICAN 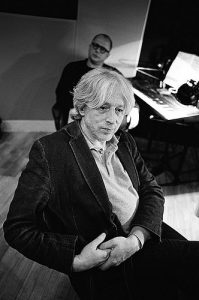 They call themselves a non-profit, non-governmental, privately-funded cultural organisation. There is something independent and free about M.Art., they don’t seem to care about existing mainstream and the needs of a modern audience. They create their own platform that attracts curious minds, artistic hipsters and defined intellectuals.

The concert took place in the Milton Court Concert Hall that is part of the Guildhall School of Music Institution, reminding one of a Kings palace: small but cosy, it welcomes finest degrees of dynamics.

Composer Leonid Desyatnikov himself was present in the hall while his chamber music was performed. Among the musicians there was pianist Aleksey Goribol, one of the Desyatnikov’s most faithful performers, and pianist Lucas Geniusas who was a finalist of Tchaikovsky Competition in Moscow. Violinist Alexander Trostiansky was especially convincing, alongside violist Sergey Komachkov and double bass player, Grigory Krotenko.

It is impossible to identify Desyatnikov’s style. While being very contemporary, his rhythm reminds us of  Sviridov’s Time Forward, but at the same time echoes Philip Glass.  While quoting from Schubert, Piazzolla, Rachmaninov and other composers, with his vivid rhythms, complex harmonies and eternal melodies, he manages to relate to Soviet times without identifying himself musically as a Russian composer. Whilst being strongly rooted in the past, his music seems to be rootless and free from any obvious dogma. The atmosphere of his sound is unlabelled and undefined. There is humour, an ability to hold the listener’s attention and a natural freedom in the whole being of Leonid Desyatnikov. 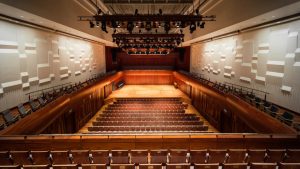 My favourite was 12 Preludes from the Songs of Bukovina for solo piano which, according to the programme notes (wittily and informatively written by composer himself), was not a commissioned work. Written in 2017, the composer refers to his childhood ambiance in Ukraine. Another favourite of mine Du côté de chez Swan for two pianos opens up the composers’ depth and humour at the same time. Juggling seriousness and irony seems to be Desyatnikov’s signature tool. Chamber music in comparison to opera or ballet, allows the listener to be closer to the composer’s imagination.

All in all, we should all urge Mr Musk to hurry up with his space travel plans in order to cherish and preserve such unique personalities as Leonid Desyatnikov.

This composer should live on another planet: one that is fully adjusted to life but almost lifeless. There he wouldn’t waste his precious time on paying bills or choosing comfortable shoes, he would be saved from unnecessary socialising, useless travelling and common generalisation.

His visit to London offered the full spectrum of his chamber music. So,  let us also hope to see his ballet and opera productions in the nearest future.