LEAP INTO THE FANTASY WORLD of Victor Bregeda

Victor Bregeda is a master of “metarealism”, a cultural movement that can be viewed as a later version of surrealism. The key difference is that “metarealism” primarily appeals to the superconscious, while surrealism is heavily influenced by subconscious expression.

“Metarealism” is a direction in Russian art and poetry that was popular from the 1970s to the 1980s. The term was coined by Mikhail Epshtein, a Russian-American literary theorist and critical thinker. Seeking to depict the reality which exists beyond a psychological subjective perspective, “metarealism” becomes a tool for the evolution of consciousness.

Each artwork presented in the exhibition is a unique, philosophical journey that combines hidden clues and multiple storylines. Some paintings appear as fascinating riddles with concealed imagery, challenging the observer to solve them.

Bregeda’s artwork makes references to a number of infamous surrealists, such as Magritte and Dali, amongst others. However, artistically he seeks inspiration from the classical school of art, as well as academic painters, most notably: Leonardo Da Vinci, Hieronymus Bosch, Peter Bruegel, Max Ernst, Nicholas Roerich and Andrew Wyeth.

Bregeda’s works present themselves as examples of impeccable technical execution. His process employs a meticulous style of layering paint and colours, which is practiced mostly by the Old Masters, producing eternal compositions. 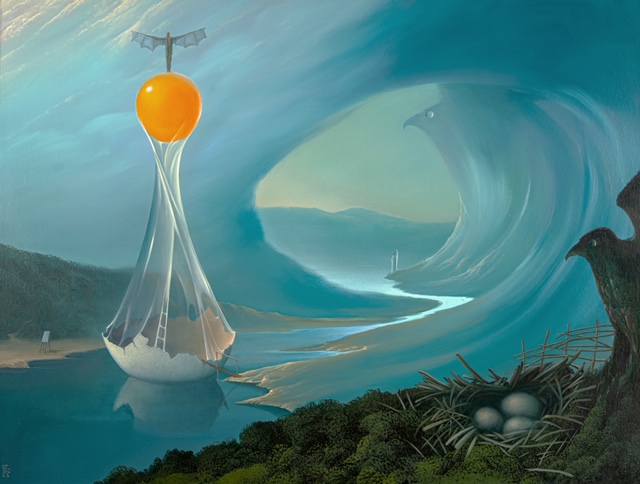 His worlds are populated with grandiose animals that become elements of dreamlike visions, revealing deep inner desires, much like the hidden metaphors which can found within Bregeda’s pieces. In this game of reality and desire, the artistic language acquires a surrealist expressive tone, reassured by a slow and meditative 3D animation.

Both of the artists explore the mystical world of the superconscious within humanity and nature. This transcendent experience, therefore, feels, as if a breath of fresh in the busy setting of London.

All works come from an important private collection and are exhibited for the first time in the UK. The prices range from 5 000 GBP.