As the pandemic has curtailed our movements it has also challenged museums around the world to find new ways of displaying their collections and engaging visitors unable to physically tour their spaces. In the case of the Anna Akhmatova Museum in St Petersburg, this has opened up new possibilities for dialogue between the digital visitor and the museum. Of course, to have one’s movements limited by border closures and quarantine regulations is not in any way comparable to the experience of being in Leningrad during the siege of September 1941 to January 1944. A sense of dislocation on the part of the (non) visitor, however, can prompt a new, if limited, way of thinking about Akhmatova’s wartime experiences in those apartment rooms that currently seem so distant when seen from our locked-down homes.

The Akhmatova Museum also incorporates another intriguing space on its ground floor in the shape of ‘Josef Brodsky’s American Study’. Here, again, the visitor encounters a ‘memorial room’ but, unlike those elsewhere in the Fountain House this is not the preservation of a space dear to its subject, but an assemblage of furniture and objects donated in 2005 by Brodsky’s widow, Maria Sozzani-Brodskaya, from his study in South Hadley, Massachusetts, and augmented by a further gift in 2015 of items from his Brooklyn apartment. Akhmatova’s recognition of the young Brodsky’s talent played a key role in his early years after their meeting at her dacha in Komarovo in August 1961, but Brodsky did not visit the Fountain House, and certainly never had a study in it. Nonetheless, in a room he never saw, the visitor still feels something of his presence, channelled through some of the things that Brodsky accumulated on his travels, carried with him, and set up in the American homes that came to stand in for the Russia from which he was expelled in 1972 and which he was destined not to see again. While we may miss our opportunities to travel away from home, the second half of Brodsky’s life was marked by a previously unimagined freedom to travel, but always with a return to a home rather than the home that would be always inaccessible. Even in death, he would be buried beside the canals of Venice rather than those of St Petersburg. 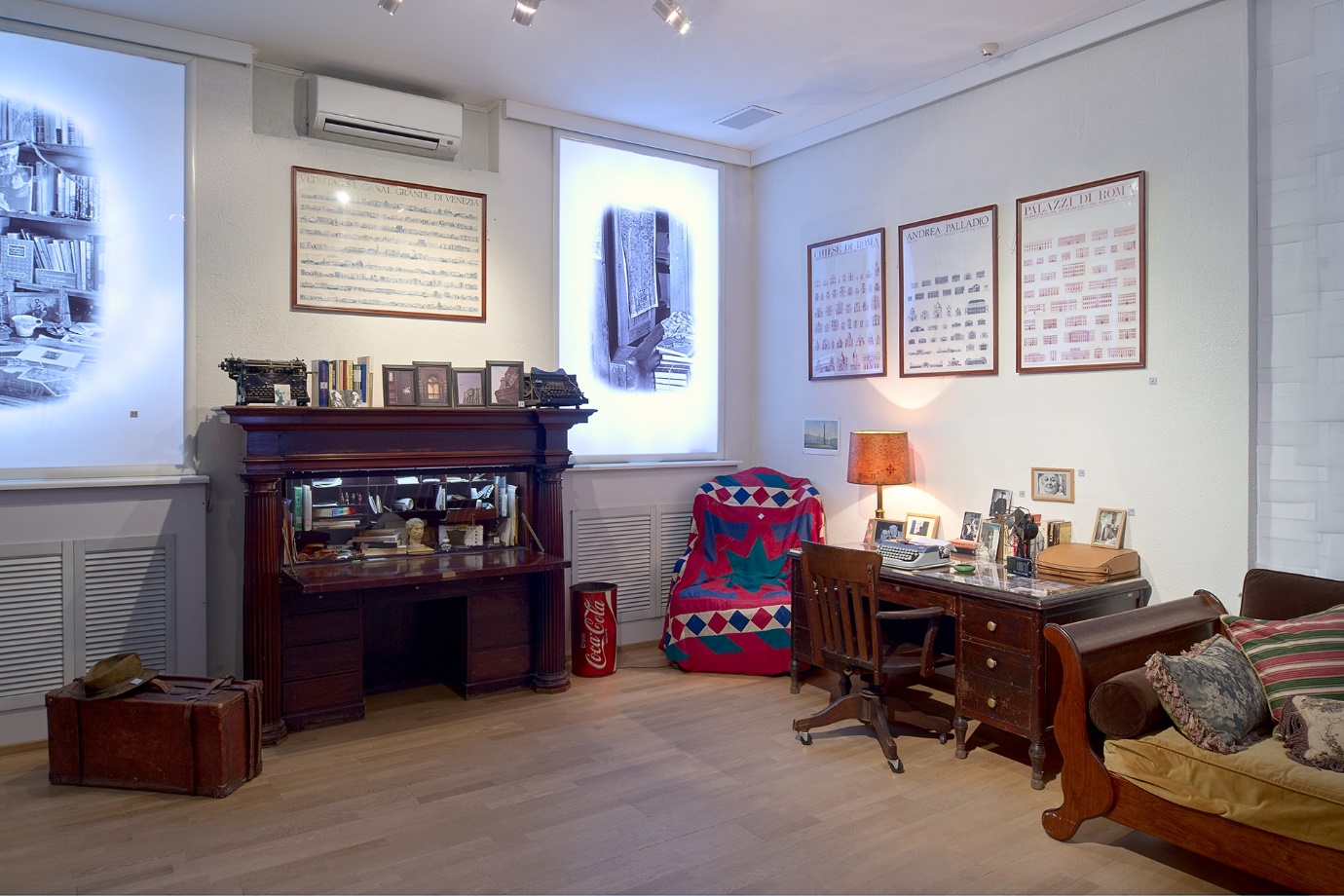 The St Petersburg apartment at Number 24, Liteiny Prospect that Brodsky did once live in opened as a museum in 2020.  It was here, as a young man with his parents, that he occupied the famous ‘room and a half’ (as his essay of the same name describes it) in a mansion block subdivided to meet the state’s ideas of appropriate domestic space. Although only the rooms themselves remain, the projection of photographs onto the apartment’s walls gives visitors some sense of the space in which Brodsky’s creative world was formed, and organised walking tours lead groups around the ‘renamed city’ that he carried with him imaginatively throughout his life. “There is no other place in Russia,” he wrote of St Petersburg, “where thoughts depart so willingly from reality.”

For a wholly online visitor, though, the Akhmatova Museum has produced something new to remind us of Brodsky’s life as a traveller, weaving together objects and episodes from his biography on a curated website ‘Joseph Brodsky: Continuation of Space’ (Продолжение пространства). With these items of ‘evidence’ the visitor can follow Brodsky as he makes his way around the world, from Britain and France to Italy and Poland, and of course to Sweden, another Baltic state with which he always felt an affinity, and where in December 1987 his work would receive the highest form of recognition via the award of the Nobel Prize. Now in possession of more than 4,500 items owned by or connected to Brodsky, the Museum is perfectly placed to undertake such a project, and, recognising that our cultural transition to a more digital way of life circumvents our need for contact with ‘authentic’ things without wholly assuaging it, has devised a virtual space within which we can feel closer to Brodsky via a better understanding of each object’s resonance.

From his suitcase to his cufflinks, and from postcards of paintings, cityscapes, and the portraits of friends to an ashtray in the shape of a Venetian gondola, these objects attest to Brodsky’s journeys in the world and his intellectual and emotional engagement with it. Some of these objects were obtained by Brodsky himself, while others acquired totemic significance in his life having come down to him from his father, whose own experiences and travels, particularly in China, provided Joseph with a taste for a world beyond that found in 1950s Leningrad. There is no narrative as such to the site, and that is in keeping with the view that Brodsky’s biography, like many of his poems, resists a clear-cut sense of linearity and process. “Any biography can be thought of as geography,” it tells us, adding that Brodsky was, in his own words, “not a historian, not a journalist, not an ethnographer. I am a traveller at best, a victim of geography. Not history, mind you, geography.”

Like his evocations of the ancient past that blend historical eras into common experience, these objects and moments from his life knit together in whatever order we encounter them. Books feature quite prominently in the exhibition content, reminding us that through his reading Brodsky was always aware that places on the map can be ‘visited’ in the imagination before any physical contact, with the writings of others facilitating movement in mental space. Thus, a 1950s copy of John Donne’s poems attests in the first instance to Brodsky’s interest in the 17th century English poet.  The particular book itself, however, given to Brodsky in 1964 by the writer and critic Lydia Chukovskaya while he was exiled to the village of Norenskaya in Russia’s remote north, and inscribed “To Joseph, with respect, gratitude, and hope” embodies not only the young Brodsky’s interest in Donne’s metaphysical verse but also his own changing circumstances and shifting sense of place and time. Objects are acquired in and are resonant of particular locations, but can then reappear in others, creating new links between them. A Burberry trench-coat may signal a taste for British design but, as the site points out, may well have been acquired in Venice, where Brodsky can be seen wearing it, or one very similar, in several famous images. 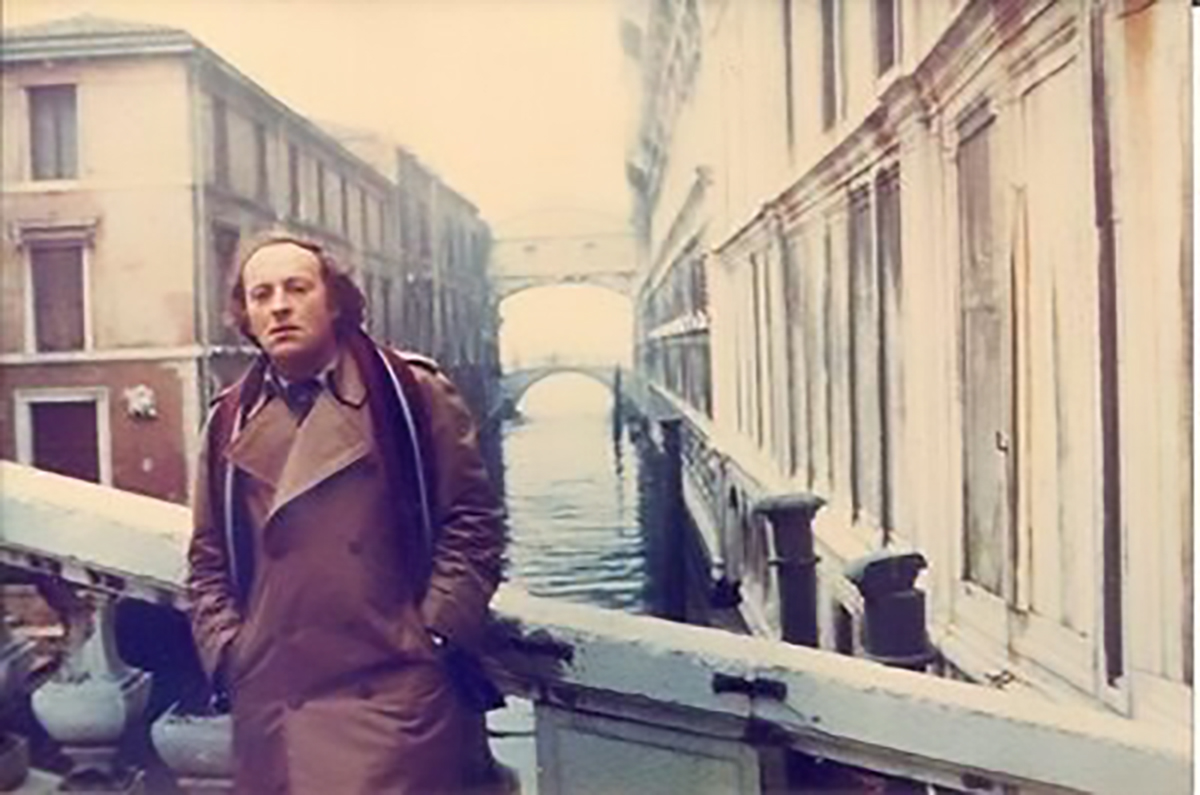 Brodsky with the Bridge of Sighs in the background, Venice. (Source: https://thelores.com/finding-modernism-in-venice/)

Brodsky’s writing on Venice in his long essay Watermark guides the reader through his interactions with the place that for years provided him with a winter escape. Reading it, we feel for ourselves the winter damp of the city out of its tourist season, shrouded in dense fog that bemuses the pedestrian in its crooked streets. It is precisely this imaginative and thoughtful engagement with a place often seen through the accounts of others before seeing for oneself that helped make Brodsky so perceptive a writer when it came to analysing his experiences of the places he did see. Trying wherever possible to evade the tourist’s check-list of sights but always conscious that the relationship between the resident and their home is built up over years and cannot be readily assimilated by the visitor from outside, he understood the uses of postcards, photographs, and souvenirs in preserving memories. These were often acquired not so much for himself as for his parents, who remained behind in Russia and were able to share their son’s travels only in the same vicarious manner that they could share his literary success.

There is no American element to this exhibition, reflecting perhaps that Brodsky’s relationship with the country he would consider his adopted home was of a different nature than with those through which he was always travelling. America was a place of employment, of teaching duties and professional responsibilities. Other countries were places for leisure, for realising plans nurtured in Leningrad that ironically only became viable when the Soviet state, having already sent Brodsky to one of its most remote regions in a bid to cure his ‘social parasitism’ through hard labour, finally concluded that there was no place for him inside the USSR’s borders. Comparing his countrymen and women to those elsewhere in Europe, Brodsky wrote in ‘In a Room and a Half’ that Russians are “a very settled people. […] For us, an apartment is for life, the town is for life, the country is for life.  The notions of permanence are therefore stronger; the sense of loss as well.” Objects and memories sustain the traveller by attaching emotions to map references. To remember where one has been is also to connect with who one has been. It is also, as we understand in our own time when social contact is so limited, to connect with those in whose company those memories were formed.

Designed in such a way that the visitor can make their own way around and through its contents, and richly informed by passages from Brodsky’s essays and interviews, this virtual exhibition allows us all travel with him and to engage with the different locations in thought-provoking ways. Until it becomes possible to travel for ourselves again, travelling with Joseph Brodsky is a timely way of mediating on what our journeys say about us, and the world through which we hope one day to resume our movement.

‘Josef Brodsky: Continuation of Space’ is curated by the Anna Akhmatova Museum in the Fountain House, Saint Petersburg.