Inside out and round and round, sang that diva of divas, Diana Ross and that, dear and cherished reader, is our theme for another stellar review. You see, oh dearest and best beloved, when the Lord created our woke planet, he clearly left out the less technically gifted. We are the Damned but without Captain Sensible at the helm.

The Damned, as you all know and this is, after all, a wide-ranging cultural site, are not only a seminal British 1970’s pop group, (‘Smash it up’ is a masterpiece) but also a Calvinist precept. Predestination. You see old Johnny babes felt we were predestined for hell and damnation, whatever our deeds on earth. I, for example, number among the Damned for I am predestined a technical moron. I am also, in the opinion of many, a moron without any technicalities, but that remains one for the long winter evenings by the fireside. Thus, as a moron, can someone please tell me, for the love of God, how to make Christies effing website go horizontal on my iPad and ‘hand held’ device (how the hell else are you going to hold your telephone? Jimi Hendrix style?)

I am going to paint you a picture and, in doing so, give you some idea of the quite extraordinary physical lengths your reviewer goes in the service of Art. The search for the waters of oblivion was nothing to the gyrations I am currently having to undergo to make this review. Kharlamov is bad enough without you having to contort yourself like Olga Korbut to see it, but the damned Christies’ site, also predestined, for reasons known only to the Great Yoga Master, will only show in portrait mode. Furthermore, as I am trying to review whilst on one knee, with right fist raised in supplication in the service of humanity, it’s beginning to hurt.

Therefore, from my current prone position, it is my sworn and painful duty to review a Christies sale that is, to quote Yevtushenko, pretti dem gud. 300 lots and, as the Spartans before them, they pack quite a punch. Regrettably, we are going to have to, again, brush over the works of art and the porcelain sections, about 50% of the sale, because I simply do not possess the wit or wisdom but I am bored of making excuses for my failings.

I therefore respectfully doff my cap to Alexis and Sarah. This is a really good sale.

Thus, we hit our straps with paintings which, after another little incident last week in our bid to rid the world of Russian paintings of ‘dubious authenticity’, only 49 this time, we hopefully possess some ability, it is in this section that our review begins. Now if I can only detach my left arm from my right ear and actually see the blessed things.

Christies have, it being an on-line sale, mixed things up a bit. Normally, paintings would begin the sale, then works of art, then icons. Here, they all nudge shoulders with one another which, as a layman, I find confusing, but others might disagree and, if they do disagree then, to quote a well-known organisation currently on the front pages and getting rave reviews – ‘expect us’. 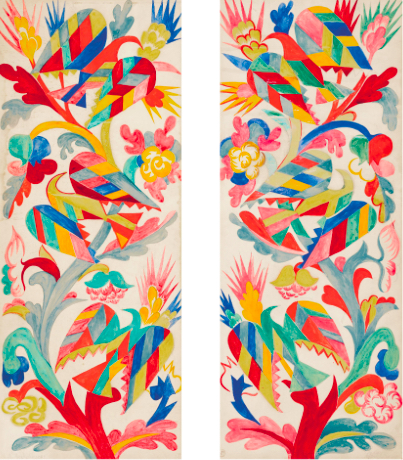 Lot 4 and 5 impress, that old hubby and wifey duo, Larionov and Goncharova. Doubtless, I have insulted someone by not naming them Goncharova and Larionov but, if we concentrate on the art, it is a matter of fact that the wife beat the husband, albeit metaphorically. There are other articles in which I have made this statement and I stand by it. Take Goncharova’s spiralling, multi-coloured, a riot of the imagination, designs for Coq d’Or (isn’t is sweet, I assume, probably quite rightly, that readers of RAC don’t need me to name the composer?) and put them up against Larionov’s Femme et Chat. I get that the latter is quirky, cynical even, but technically, Larionov is, was and will be (being dead has its advantages) an inferior technician and artist than his wife. At time of writing, and showing how up-to-date, on-the-button and in-the-swim this review is, a bid have been taken on the former with two weeks till close of play. Kerching! The provenance for both is that paean to the Russian Avant Garde, Ingrid Hutton. Someone should write a book about her and Leonard, their achievements, their gallery, their role in getting the Russian Avant Garde where it belongs. Ingrid had a laugh that came straight from her bootstraps and I loved her to bits. 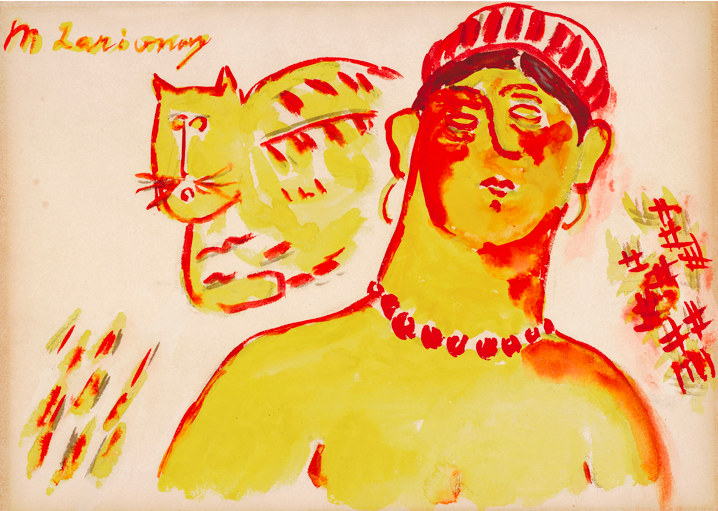 I also enjoyed Christies spelling of the next lot, by the Artist formerly known as Pogedaieff. He’s morphed, honey! Did he, secretly, attempt to get a job with Disney on their first colour feature-length film under an assumed name, with added accents, umlauts and aigus,? The seven gentlemen of restricted growth that form the lot are actually well-drawn and commercial, one of Pogédaïeff’s better efforts, though Grumpy looks like Ivan Shishkin whilst Dopey, the Russian for which is «обкуренный», looks like…now, that would be telling. Happy? I am never sure we (I have dual nationality) Russians really do “Happy”.

Landscapes featured large at Sotheby’s and Macdougalls last month and Christie’s, not to be undone, have unearthed three pretty good ones. Of course, neither of them touch the dizzy heights of the ‘Great Road’ by Levitan sold by yours truly at the beginning of the year, one of those rare occasions when both buyer and seller side with the angels, but Christies have dug up a pretty good combo. Levitan is, actually, a very good artist, always able to sum up mood which he does very successfully in his twilight view of a ‘Lake in the Forest’, and the study for ‘High Water’ (as in the phrase, ‘come Hell or’). Expect these two to sell well, as should the Joker in the Pack, the Muhammed Ali, the Billy Turner of Russian landscape painting, Fyodor Vassiliev. In the 200 years I have been on this market, I have yet to encounter a Fyodor Vasiliev at auction. I have seen a couple in Moscow, but none in the West and I have always had a, ‘what might have been’, romanticized view of this artist. But hereby hangs a tale.

Many years ago, I knew a Moscow collector, AS. Great fun, former spy, magnificent eye, swore like a bootmaker – for our foreign readership Russians swear not, as do we English (I have dual nationality, see above) like ‘troopers’ or ‘navvies’, they swear like Manolo Blahnik. At any rate, AS had a large landscape by a well-known landscape painter (you see how I’m not revealing the details, I don’t want a message from the ‘organs’, mine are especially sacred, saying ‘expect us’?) in which the young Vasiliev lay on the grass in front of a monastery. It so pricked my interest that I began taking every opportunity to discover more about this young prodigy and was quite astonished to know that he had died of typhoid aged 23 in that peninsular of Eastern Europe now under new management. 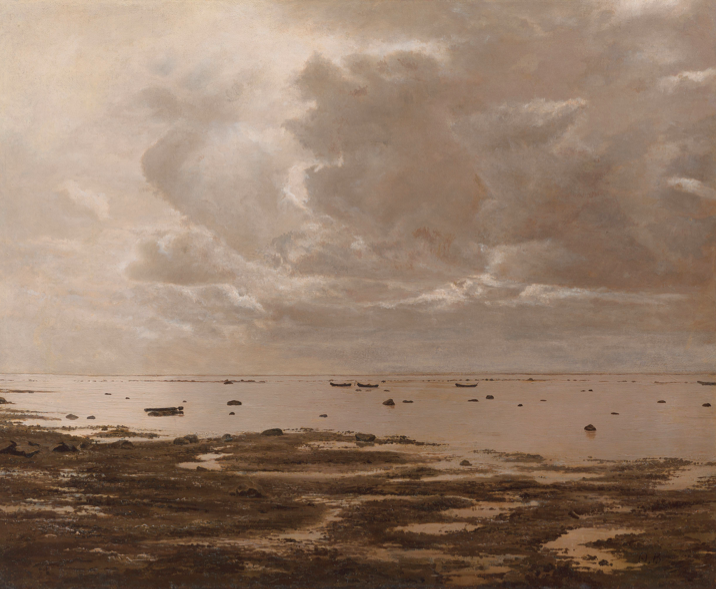 The quality of his work, at such a tender age, was breathtaking. We all know ‘Thaw’ and ‘Wet Meadow’ and, in my opinion, his strongest work, ‘Swamp in the Forest’. Please bear in mind that the artist was a stripling, a baby barely out of Pempers when he completed them, 18-22. My daughter, n-n-n-nineteen, she can paint. She can’t paint like Vasiliev. Thus, the offered lot at Christies, No. 42, is a mega discovery with attractive estimate and provenance. Go Vass!

Another painting quite capable of hitting the heights is Pasternak’s, ‘Still life with hyacinths and tulips and hollyhocks and peonies and…’ It’s got the word ‘commercial’ plastered all over it and I am going to predict a £100-plus result. Why? Because it went for £72,000 hammer last time it came up which, whilst we are on the subject, was the last time, November 2008, when the world was heading south in a rather large handcart. 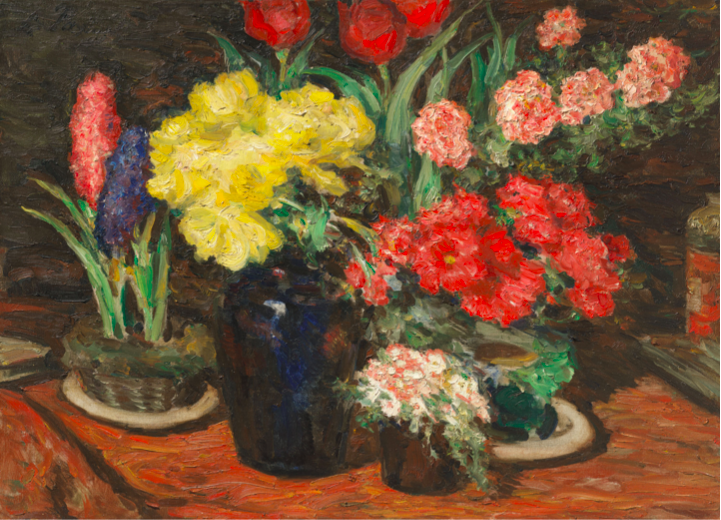 But, as the world and his wife know, the early 20th century is my bag and Lot 13, a costume design for ‘Sadko’ by Bakst is a right belter. It’s big, not unimportant (double negative alert), has a cracking exhibition history and was formerly in the collection of Monty and Barbie Passes and, before you think that I am going to move on to the next paragraph without remarking on the jaw-dropping surname of the previous owners, think again. Passes? To whom? Ken? Ronaldo? The Passes, close relatives of the Simplon, St Bernhard and Khyber families were, it seems, responsible for the distribution of Levi jeans in Europe. A, wait for it, Bakstop, in effect. Buy it. It’s a blinder and, lo! Lo! A light in yonder auction breaks! Someone has already placed a bid on it! I am vindicated! It will hit £70,000 or my name isn’t Barbie Passes. 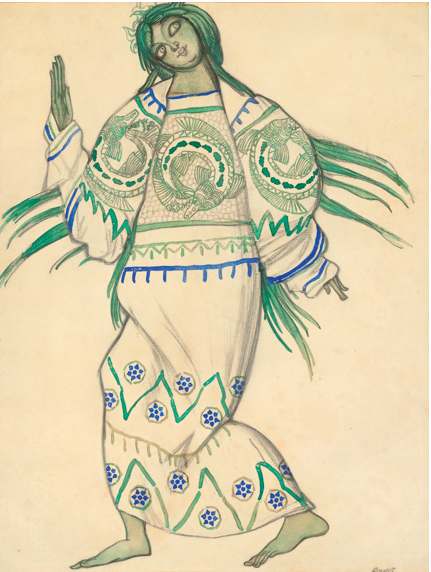 Pornography, a Marmite sort of a subject, also features in Christies sale. Eisenstein, whatever his genius as a film director and, let’s be honest, he’s better than Hitchcock and Kubrik combined, sure had some interesting sexual proclivities and, should you get past the warning of explicit material on Christies site, you are greeted with gyrations similar to the ones I am currently having to perform in reading this damned site.

In closing, I have an announcement. We are now going to have a Reader of the Third (because, God help me, likes threesomes, sorry ‘troitsy’) Month competition! Inspired by my own victory in some trifling writing competition recently and, spurred into action by one of my readers claiming that she did not know that, ‘I possessed such depth’, I am putting out this monthly prize, details of which are, as yet, unavailable, for all readers! Send in your comments, each will be judged on its own merits, i.e. whether or not it likes our site/me. Monty Passes judgement.

I am thrilled to announce that our winning candidate for June/July and August has already been crowned! Your laurels await! Victor Ludurom! In fact, I wish to propose this reader for an annual award as well because, in writing to our sainted Editor about my reviews, he described my words as ‘disgusting’, ‘nothing about art’, ‘can’t spell’ and has cancelled his/her/its subscription forthwith.