I’ve Been Abducted Hundreds of Times. Gosha Ostretsov in Venice, 9 May – 30 June 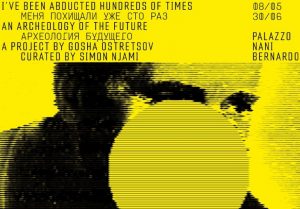 The exhibition «I’ve been abducted hundreds of times» is a journey conceived by Russian artist Gosha Ostretsov and his curator Simon Njami. It will take place at Palazzo Nani Bernardo from May 9 to June 30, 2017. «I’ve been abducted hundreds of times» is a hallucination, a heterochrony, and archaeology of the future. Using the specific world of an artist, we have decided to present history as a script in which components complement each other, break up and conduct a dialogue. These components are an Italian renaissance palazzo, relics of Soviet-era culture, archives, an interstellar flight, literature and, of course, the plasticity of Venice hosting the best examples of contemporary art from around the world. We have put our heads together with Gosha Ostretsov to tell you a story where everyone can find himself or herself, a story of all forms and all periods in human history.

Russian artist Gosha Ostretsov was born in Moscow in 1967. In the 1980s, he abandoned the Soviet-style study of academic art and joined a group of avant-garde artists who worked in a kindergarten. He went to Paris in 1988. It was the age of perestroika, and the West wanted to know about young Russian artists and what they had to say about their experience. Ten years later, Gosha returned to Moscow where he tried his hand at a variety of artistic forms, including performance, sculpture and painting. He found inspiration in illustrations for science fiction and religious books, comics, fiction, Soviet films from the 1950s and 1960s, icons, and much more.

Gosha Ostretsov tells us fantastic stories through his painting and performances. In 2010, he brought together a group of about 20 artists and called it VGLAZ. In 2012, art collector and gallerist Charles Saatchi chose some of their works for a group show called «Gaiety Is the Most Outstanding Feature of the Soviet Union», and later bought some of them.

Simon Njami is a writer and an independent curator, lecturer, art critic and essayist.

He has published his first novel «Cercueil et Cie» in 1985, followed by «Les Enfants de la Cité» in 1987, «Les Clandestins» and «African Gigolo» in 1989. He wrote two biographies, about James Baldwin and Léopold Sédar Senghor, several short texts, and scripts for feature films and documentaries.

Njami is the co-founder of Revue Noire, a journal of contemporary African and extra-occidental art, and he was Visiting Professor at the University of California San Diego (UCSD). He curated many international exhibitions and was among the first to show contemporary African artists’ works on international platforms. He has served as Artistic Director of Bamako Encounters African photography biennial from 2001 to 2007. Njami is the curator of the Africa Remix photo exhibition that was on view in Düsseldorf (Museum Kunst Palast), London (Hayward Gallery), Paris (Centre Pompidou), Tokyo (Mori Museum), Stockholm (Moderna Museet) and Johannesburg (Johannesburg Art Gallery) from 2004 to 2007. The exhibition «The Divine Comedy: Heaven, Purgatory, and Hell Revisited by Contemporary African Artists» was shown at MMK (Museum für Moderne Kunst, Frankfurt am Main), the SCAD Museum of Art in 2014, and at Smithsonian Institution’s African Art Museum, Washington, in 2015. Simon Njami was the Artistic Director of the 12th edition of Dak’art, the Dakar Biennale, which took place in Senegal in 2016.

Invited to numerous art and photography juries, such as the World Press Photo Contest, Njami is the Art Adviser of the Sindika Dokolo Foundation (Luanda) and the Artistic Director of the Donwahi Foundation (Abidjan) and member of the scientific boards of numerous museums around the world.