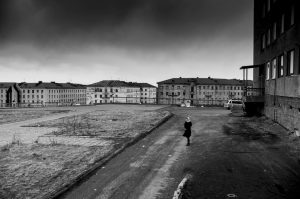 Borimir Totev: What is it about Norilsk in particular, out of all the so-called former mono-cities in Russia – that attracted you and your camera lens?

Grigoriy Yaroshenko: In 2015 I was invited to take photographs in Norilsk by Olga Sviblova, head of the Multimedia Museum in Moscow. The subject was the 80th Anniversary of Norilsk and it’s metal production industry. Today it’s been 82 yers since the city was built, largely on the “bones” of labour camp prisoners. When in Norilsk, one can sense that hundreds of thousands of lives are buried there.

There are many mono cities in Russia, but I have not been to many of them. Norilsk for me is one of those incredible places that are so abundant with material for photography. However it’s important to see beyond the first impression of the rubbish dumps, cracking buildings, red rivers, pollution and smog from the factories. It’s important to make sense of the city. I am not sure how much I achieved  in one week but I tried.

BT: Are your photographs of to be viewed as constructing a particular story of Norilsk, or do they all speak for themselves in separate ways?

GY: Great photographs always make a story. You should try to place them in a series and that’s a good result from a photographers point of view. Have I managed? It’s hard to say but I like this project and the series, although I’m not the one to say if they fit into one particular storyline.

BT: In view of your other series of photographs of Norilsk, how much of a character is the city in its own right and what is the role played by the citizens of the city?

GY: People are important, they create an image of the city. The city could not be a city without the citizens. I made two series in Norilsk: black and white photographs that you see in my book and just over a dozen photographs of citizens in colour. In Norilsk May and June are the “White Nights” period, it doesn’t get dark at night. So after I spent day time photographing factories and workers, at night I went on the streets and photographed the city and it’s people. There are couples and groups and single portraits. They were shown along with other industrial photographs in the exhibition in Moscow Media Museum which afterwards was shown in Norilsk.

People of Norilsk are remarkably strong people. They have one common purpose – to leave the city one day and send their children elsewhere. It’s what they dream about. But they also love the place, it would not be possible to live there and to hate it. It would take harmony out of their lives otherwise. It’s a hard and frightening place at times but it’s been improving recently. They have more theatres and exhibitions coming to the city, cultural events are happening more and more. The hardship and difficulties don’t frighten people there. It’s their reality. So when I start complaining about my own problems in Moscow I start remembering what it’s like for people in Norilsk. 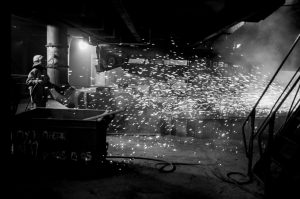 BT: How is it that Norilsk is a contemporary ruin to itself, upon which the city continues to be built? What does this do to ones understanding of time and space in Norilsk?

GY: Norilsk makes a dual impression. The first frightening impression departs once you start talking with people and understand the history of the place. Norilsk developed around the mining industry. Its earth has produced layers of metals, gold, platinum, copper etc. It also has permafrost and 24h of darkness for 6 months out of 12. It has 9 months of winter. This place was not created for people’s leisure. It’s a place for work and extracting all the resources you can get out of the ground. The living conditions are very tough: winter temperatures go as low as minus 50 C. Summers are short. The locals say if the plant is not quick enough to blossom it dies. Same for people. Permafrost ruins buildings. It’s impossible to clear the ruins as there is nowhere to move them, no roads. Only railways and airfreight. It takes four days sailing to Krasnoyarsk via the Enisey river. Time flows differently too. Summer is more like spring. Winter is one endless night. In my photographs people strive to survive the night and to live to see the spring.

BT: Could you explain to us a little bit more about the difficulties of traveling to, being, living and working in Norilsk?

GY: We arrived in Norilsk in summer, the best season. We found many interesting communities there. They have great photography community called ”Zapolyarny”, a sports stadium also called “ Zapolyarny” (beyond the Polar). Life is full of hardship for these people. There are tons of metres of snow. In winter there are special bridges built for people to cross from factories to bus stops. There are walking ropes to lead them from point A to B. It’s unimaginable for us how people survive winters there, hence they dream about sending their kids away. In the summer we were driving everywhere. In winter there’s nowhere to go. You can move around areas of the city or visit Dudinka port on Enisey river. But it’s almost impossible to reach it in winter. railways get buried under the snow.

It’s a special place. Today they closed the oldest and most polluting factory. But when I was there in 2015 it was still extracting sulfur, which you would smell at times and made it  impossible to breathe. The “fog” that appears as a photographic device was in fact a pollution cloud, not a morning mist. This plant is now closed and the authorities are improving the ecological situation. Probably one day it will be clean or they will stop mining and resources will come to an end. People will move out and leave the ruins behind them. Or maybe they will build new roads and railways, despite the permafrost, using new technologies. The city will not be so isolated. But now it’s an island. Citizens of Norilsk call the rest of the country a “continent”. Norilsk is an “island” if you look on the map.

BT: Are your photographs of Norilsk an art project or a documentary?

GY: I’m not the best judge of my work. Time will tell, later historians and art curators will categorize this work. For me it’s a document of time. It’s what photography should be. I didn’t try to make the reality more beautiful or on the contrary shocking. I photographed what I saw in the most objective way I could. In 10-15 years everything will change. The buildings, the roads, the people will no longer be there. The city may no longer exist. The role of the photographer is to document the present and pass this message to the next generations. They will make the image of the time we lived in. I think it’s important.

Order your book in our Online shop. 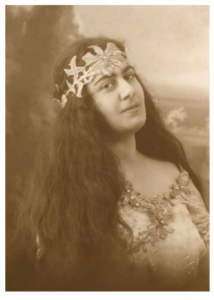