In Conversation With Andrey Zvyagintsev, Film Director And Screenwriter

To mark the release of his new Oscar-nominated film Loveless Col Spector talks to director Andrey Zvyagintsev about centrifugal storytelling and getting chilling performances from his child actor. 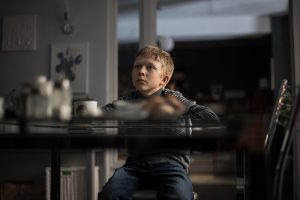 Col Spector: Where did the initial idea for Loveless come from?

Andrey Zvyagiuntsev: After making Elena I was trying to think about what I would do next and the idea came to me to remake a very well known film of Ingmar Bergman’s, Scenes From A Marriage. My producer liked the idea but we couldn’ t get the rights. However, the idea stayed with me and so, when my co-writer Oleg Negin found a new story about the volunteer movement Liza Alert in Russia, these two ideas – the family which was breaking apart, and the search for a missing child – somehow coalesced into a story which eventually became Loveless.

CS: Are the characters of the parents, Boris and Zhenya, based on people that you and your co-writer Oleg Negin know?

AZ: No. These are fictional characters based on our observations of ourselves and of people we meet in life. They are the result of an amalgamation of what we see and observe in life.

CS: So they are a combination of many different people?

AZ: Yes very much so – out of our observations and our experience. I could quote Bergman himself when he was asked how long it took him to write Scenes From A Marriage he said: “I wrote the script in 20 days.. and 20 years.” So it was from the experience of his entire life. And for me and Oleg we have a multitude of little different things – big and small that we have been observing and that we put together. For instance, I was in a taxi with a friend and she turned on Siri on her phone and asked “I dreamed off a tooth being pulled out – what does that mean?”  And you come home and you immediately want to write that line into your script. The only question then is which character am I going to give it to?

CS: In your films, the camera often moves, almost as it’s a character itself – how do you decide when and how you move the camera?

AZ: I can’t rememeber who the great director was who said that the movement of the camera is not a purely technological thing, it’s an ethical gesture, and it can get repetitive so you should not overuse it. I find the moving camera a way of observing or contemplating human beings or nature.

CS: Is it almost as if the moving camera represents your eyes as you observe the scene?

AZ: It’s not me Andrey Zvyagintsev or the author of the film, it is an invitation for my audience to be that person who is in the middle of what is going on. It is an open door to them, my audience, to get into the story.

CS: Sometimes in your films the main characters will leave the scene for a moment and we will briefly follow another story for a moment  – such as in Loveless the volunteer group leave the school in search of the missing boy but we go back into the classroom and see a teacher, who we have never seen before, as she cleans the blackboard and then the camera drifts towards the window. Why did you do this?

AZ: The sequence with the teacher and the camera drifting to see the snow out of the window was completely unplanned. We thought it could work as a connection with the long sequence from the opening with the boy walking along the snowy landscape by river. When we were filming in the classroom we were just shocked and stunned by the beauty of that snow which had just fallen and we wanted to bring it into the film – and with the teacher looking to the window we were trying to make a connection between that sequence and the opening sequence – trying to bring that snow and nature closer to the centre of the film.

There is a sequence in Loveless where the volunteers are plastering the leaflets on lamp-posts and then we see a man who is just walking along and then goes into an alley. The camera follows him for a while, who we never see again. To my utter surprise, there were quite a few people in the audience who said that man is, in fact, a kidnapper or a murderer. Of course, I didn’t intend that. For me, the audience are so used to cliches that they are prepared to see a maniac in a passerby who happens to be at a bus stop. And for me, these centrifugal sequences or characters are just a means of expanding the scope of the story – showing how whilst the central story is evolving life is going on.

CS: There is an incredible moment near the beginning of the film where Zhenya leaves the bathroom and the camera tracks back to reveal her son standing there silently screaming. How did you get that performance from the boy?

AZ: For me, this scene is the way that the viewer gets into the very heart of the film.

The boy who was acting in the film had not read the script. He had not heard a single word of what had been said in the kitchen by his parents so he had no idea what was going on in the kitchen – and that was absolutely deliberate. On that day when we were filming as soon as I saw that the boy was ready, that he was prepared for this emotional state, the actress got up from the toilet and walked away and we moved to the close-up of the boy and he was crying. We had agreed that he would think about something he’d been dreaming of for a long time and at a certain moment he was to imagine that whatever it was that he had been dreaming of for years, that that dream was never, ever going to materialise – he was never ever going to see, or have, or experience it. So that was pure imagination – purely an acting assignment. I’m sorry not to have included in the final credits the waiver that no child was damaged in the making of this film!

Loveless will be in cinemas from February 9th.