Interview with Marat Guelman, Curator of Art Riot Show at the Saatchi Gallery 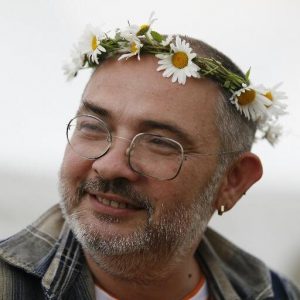 Today we are publishing our concluding interview in the Art Riot series. Russian collector, gallerist, curator and art -manager Marat Guelman is a respected veteran of the Russian art scene. He first came to prominence and became internationally known during  his years in office as Director of PERMM contemporary art museum in Perm.

Prior to that, in 1990, a year preceding the collapse of the Soviet Union,  Guelman founded his own art gallery. And it will not be an exaggeration to say that the history of Guelman’s gallery mirrors the process of evolution of the contemporary art in post-Soviet Russia. From the very initial stages of its existence, the  Gallery has not just been an important exhibition space, but also a melting pot of ideas, an intellectual hub where some major concepts, prevailing in contemporary Russian art at the moment, were either born or found their further development.  The Gallery alternated exhibitons of the respected leading classics of Moscow conceptualism (Yuri Albert, Igor Makarevich, Vadim Zakharov, Dmitry Prigov) and leaders of  Sots Art ( such as Vitaly Komar & Alexander Melamid) with then unknown artists who later became stars of the Russian art -scene. Over the years, the gallery has collaborated with almost every prominent artist in Russia, including Pavel Pepperstein, Georgy Ostretsov, Timur Novikov, performance artist Vladislav Mamyshev-Monroe, Yury Shabelnikov, painters Valery Koshlyakov, Alexander Vinogradov & Vladimir Dubosarsky, Dmitry Vrubel, actionist artists Oleg Kulik, Anatoly Osmolovsky, Alexander Brener,  Avdey Ter-Oganyan, Blue Noses to the pioneers of media art, such as  AES+F, Olga Chernysheva, Vladislav Efimov & Aristarkh Chernyshev  or installation artists and painters Alexander Brodsky, Alexey Belyaev-Gintovt, Dmitry Gutov, Grisha Bruskin and Irina Nakhova. Many of them represented Russia at the Venetian Binnale over the years.

In 2014 Guelman moved to Montenegro to flee from political pressure put on him.  In 2014  Guelman along with Neil Emilfarb and Petar Cukovic launched Dukley European Art Community residency programme. The programme was initially invitation-based, however, now it welcomes all artists to sumbit through application. It was actually running Russian seasons between 2015-2017. The works resulting from the residency programme are exhibited on a regular basis. Eventually, this project  has brought about significant changes to the cultural status of Kotor, and of the whole Montenegro region. Marat Guelman has now chosen this country as his country of residency in order to further advance and implement his concept of post-economy society and humanitarian engineering.

This long preamble was preceding our interview taken from Marat at the Saatchi Gallery, where he acted as curator of the Art Riot show, which was met with mcuh enthusiasm and to a great critical acclaim.