INTERVIEW: Conversation with Erik Bulatov on his Monumental Installation at Tate Modern. By Katya Belyaeva 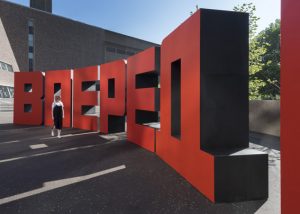 Forward 2016 is Erik Bulatov’s first sculpture which was conceived following a visit to a decommissioned 19th century iron foundry in Maubourguet, France. The work consists of the word ‘forward’ spelled out four times in Cyrillic letters, each standing ten feet high and arranged in a wide circle. The project was supported by the London non-profit organisation a/political which facilitates the realisation of ambitious projects.

Katya Belyaeva: Two years ago, you opened the BOT (VOT) exhibition initiated by Simon De Pury and curated by Kasia Kulczyk at the Kulczyk Foundation, and now you are showing this monumental sculpture at Tate. How did this come about?

Erik Bulatov: There was no initiative on my part, and museums usually do not show much interest in my work, even though I have been awarded the Chevalier des Arts et des Lettres by the French government, and some of my works will now be in the Centre Pompidou in its permanent collection. However, in this particular case, the initiative comes from the Tate Modern itself.

KB How did this installation come about?

EB: For me, this work is a painted image. This is the next stage of my painterly practice. What is a painting? It is a vertical flat surface, real, tangible and quite concrete;  and an imaginary space that we can build underneath this surface. So, this work represents flatness and space joined together.

This installation is the next stage in my advancing towards the goal. What if a painting is immersed not into an imaginary, but into a real space? Will this painting hold this space, will there be a natural connection between the painting and the reality or not? It seems to me that this connection works in this installation. When we are inside the circle, we are surrounded by a flat row of equally coloured red letters. We see this flat surface because we face each letter individually. That is, there is a continuous plane surface that surrounds us. This is the surface of the painted picture that surrounds us, and there is a real space behind. They are so organically connected that it creates a natural world. This opens up the possibilities of the painting within an installation. 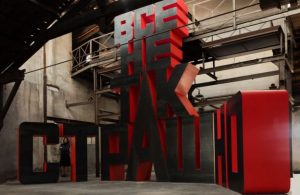 The sculpture was cast at the iron foundry in Maubourguet, France. In fact, this is our joint work with the artist Andrei Molodkin who made the actual sculpture. What you see at the Tate is only a one third of the original installation. The whole work consists of several paintings and two sculptural installations. I would love to show the whole work one day, but it would have been very difficult to bring it here because of the size of the installation. The second part is actually six meters high and consists of four words: Все не так страшно (Everything is not that frightening). So, something to look forward to. Right now, one may see the whole piece only in the iron foundry in Maubourguet, and I do not know if there will be an opportunity to have it displayed elsewhere.

KB: Tate Modern marks the centenary of the 1917 October Revolution with this work. How do you link the installation with the Revolution?

EB: The Soviet intonation in the slogan “Forward” is definitely present there, however, it does not refer to the Soviet theme only. The wish to achieve something at all costs very often leads to our being thrown far back. One letter simply falls from fatigue in this installation. I like how this work is installed, and I am pleased that this installation has instantly entered the the urban life and blended with the urban space.

There is some politics in art. For instance, there will run a big exhibition of Ilya Kabakov at the Tate Modern later this year, so for me it is a signal that there will be no other “Russian” exhibitions for a long time. Contemporary Russian art in the West is represented by very few artists, still none of them can represent Russian art as a whole.

When this revolution in art happened in the 19th century, with the school of the Impressionists emerging, it was a collective effort of a group of artists. They argued, shared their views on art, and as a result, we can now speak about the French art as a whole. In Russia, nothing like that happened. When our underground art movement just began, it was not because a group of artists with related or similar views and ideas came together, but only because a certain number of artists refused to do what the Soviet authorities ordered or expected  them to do. The views of these artists were very different, they had completely different views on art, they had practically nothing in common, except for the fact they stood up against the official Soviet art. The only idea bringing them together was being “against”. It did not matter how one did this, it only mattered that one did this counter the way one was expected. Many artists were doing what had already been done in the West.

Then, gradually, some serious artists began to stand out through their own ideas on art, they started coming out with their own artistic programmes, but they were in no way related or united. For this reason, it is very difficult to exhibit contemporary Russian art, as group exhibitions more often than not sow confusion and misunderstanding. Some artists managed to achieve great success, but this was only their personal success, and not the success of the Russian art in general. Such masters as Chagall or Kandinsky became part of the European art history.  However, ultimately, it is not clear what the contemporary Russian art is and which ideas it promotes.

Other Articles By Katya Belyaeva 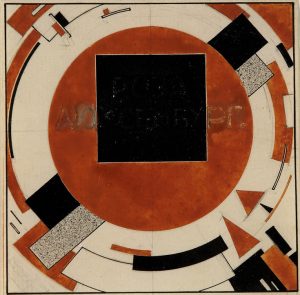 Maria Tsantsanoglou tells RA+C about why and how the legendary Costakis Collection has been relaunched. 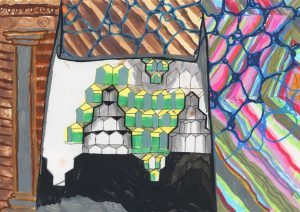 INTERVIEW: The Moscow Triennale Curators Share their Vision for the Russian Contemporary Art, its Major Trends and Future. By Katya Belyaeva. 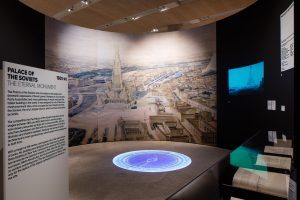 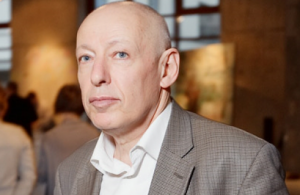 INTERVIEW: Joseph Backstein on His Work and Contemporary Art Practices. By Katya Belyaeva