Frieze Art Fair has since its establishment in 2003 attracted an increasing number of galleries and visitors confirming its position as one of the leaders of modern and contemporary art. As in previous years, the 170 galleries showed a wide range of art including some Russian artists of interest. The two Russia-related booths at Frieze Masters were Alexander Gray Associate’s display of Sergei Eistenstein’s illustrations, drawings and film clips, and Galleria Continua’s extraordinary exhibit of Ilya and Emilia Kabakov. 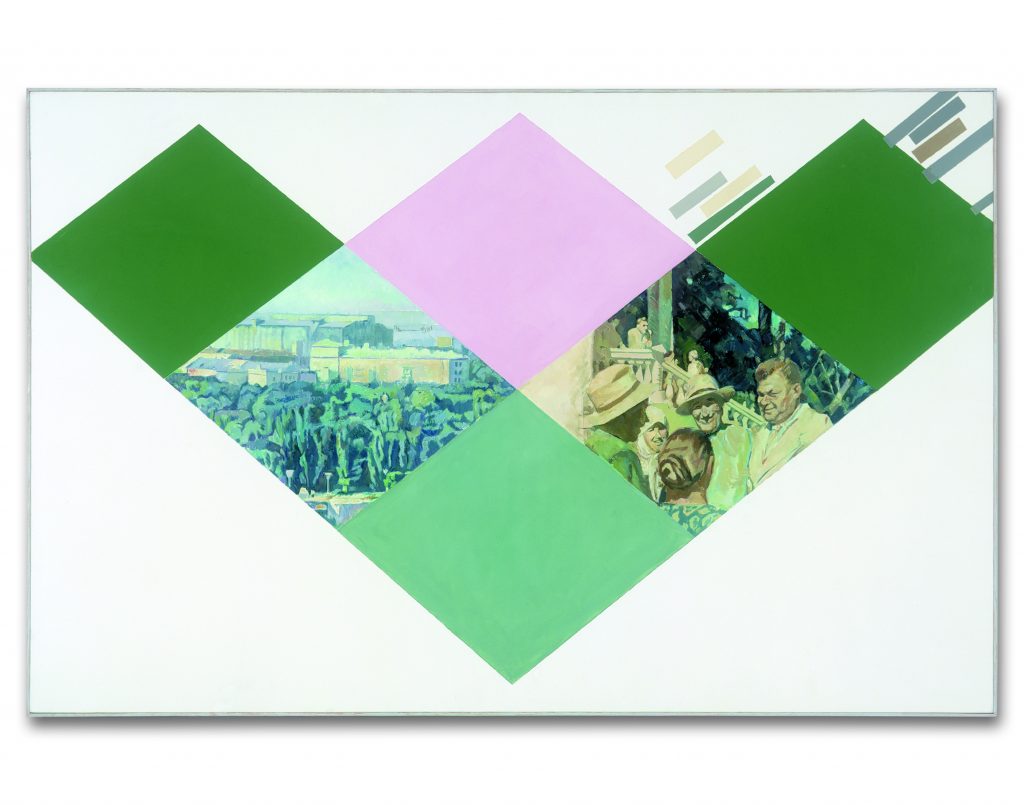 Ilya KabakovCharles Rosenthal: Twelve Commentaries on Suprematism # 5, 1926, On the staircase of the sanatorium, 1998

The Kabakovs’ display featured seven pieces from the Charles Rosenthal: Twelve Commentaries on Suprematism series (1989), the mixed media installation The Rope of Life (1985/2018),three large masonite plates with extracts from USSR regulations (1982), and several drawings. The Rosenthal series’ presentation consisted of seven out of the twelve paintings initially made, two more being in the gallery’s holding. Their arrangement replicated the layout of the first display in Mito, Japan in 1999.

The series is worth further attention. It is quite a late work of the now 85-year-old Kabakov created in the decade following his immigration from Russia to (eventually) Long Island, New York. While all the paintings in the series can function as individual artworks, as a whole they constitute a patchy insight into the life of a fictional artist Charles Rosenthal, creation of Kabakov’s fantasy and arguably his alter ego.  The works are white canvases upon which geometrical shapes of varying sizes are painted, some of them are monotone, in shades of pale green or pink, whilst the others, more colourful and realistic, constitute a ‘window’ into the life of Charles Rosenthal. Initially the works were part of the installation The Life and Creativity of Charles Rosenthal (1999). It represented a retrospective of Rosenthal (1898-1933) and development of his work paired with commentaries and diary excerpt of this entirely fictional character. This exploration of art through the eyes of a fictional artist allowed Kabakov to raise the questions on the artistic traditions preceding his own life and at the same time to distance himself from the solutions of the early twentieth century’s problems of light and geometry reflected in Rosenthal’s work. The project is a part of Kabakov’s life-long investigation on alternative art histories. 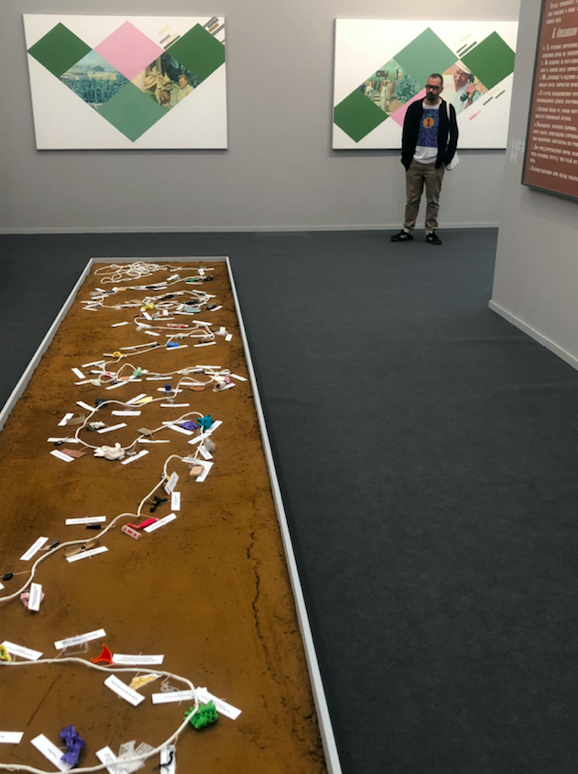 The Rope of Life is placed on the floor amidst six paintings from the Rosenthal series. First realised in 1985 it is a reflection on memory, recycling and all the things we leave behind in the course life. The work consists of a white rope spread on a rectangle of brown sand with attached pieces of ‘garbage’ — papers, fragments of bottles, notes – each with a label referring to a date and sometimes a particular event. The dates range from 1933, the year Kabakov was born, to 1985, when the installation was first created, although the rope continues to both sides of these dates without the attached pieces.

Being framed by the Rosenthal series it raises intriguing concerns about the continuity of life and brings to attention the curious fact that Rosenthal died the same year that Kabakov was born. Is the artist toying with an idea of reincarnation? Continuation of artistic tradition? Or does this fictional predecessor suggest the existence of Kabakov before Kabakov? Although produced in different decades and in different contexts, both works explore the themes of time and life span which Kabakov continues to work on in his later career together with his wife and partner Emilia.

Views and responses towards communism and Soviet state is another major thread in Kabakov’s work. Considering it to be similar with other utopias such as capitalism, and thereby of human nature, he tends to depict it as an idealist project that could fall into the trap of authoritarianism not because of it being fundamentally wrong but, as one of the gallery representatives jokingly told me, because ‘life happens’. 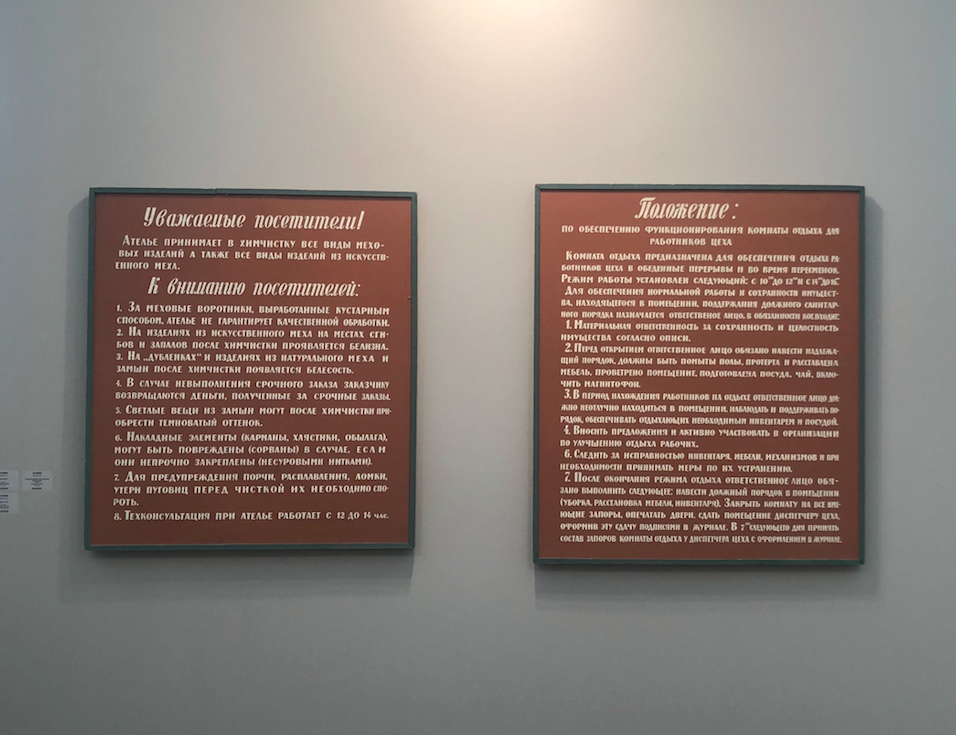 This humanising (and perhaps slightly romanticised) view of communism and capitalism also allows Kabakov to remain contemporary in the decades after the Cold War. For example, the Rosenthalproject can be read as a commentary on the dichotomy of Eastern and Western Europe which dominated most of the twentieth century and remains topical today. The images of Rosenthal’s life refer both to Malevich’s Suprematism with its play of geometrical shapes, and the nineteenth century Western European Post-Impressionist traditions which Kabakov explores in the style of the depiction of the scenes.  The fact that most of the scenes have some positive atmosphere and feeling behind them reflects Kabakov’s own ‘light’ perception of the ideologies which he often depicts despite all the struggles with the regime.

Ilya Kabakov is not only one of the most well-known contemporary Russian artist, but also an artist whose works remain urgent and contemporary. Undoubtedly, some of Kabakov’s ideas are deeply rooted in the histories and aesthetics of Russia, the USSR and the Cold War. However, he has a unique ability to transcend beyond these limitations and challenge the boundaries between the fictional and the real, between utopia and realism which remain topical in any context.