On the 9th February Russian London saw the premiere of a multimedia, one man science show Homo Mutabilis with Ilya Kolmanovsky in the starring role.

Kolmanovsky needs no introduction. At the start of the performance I overheard other audience members discussing how they never miss any of his London shows and how his youtube series, Pocket Scientist, is now the only Russian language content their children ever watch. Many actually brought their children with them – it was advertised for all those 12 years and over. I was hardly surprised therefore to see the show practically sold out. And when a chatty group of teenagers sat down beside me, I thought well this will be a great test. How often would they get their phones out or rustle their crisp packets.

Spoiler – not one of them! Of course having a good London upbringing plays a part plus coming to such an intellectual event. But the real reason is what happened on stage. The room fell silent immediately and no one got their phone out or fidgeted at all. 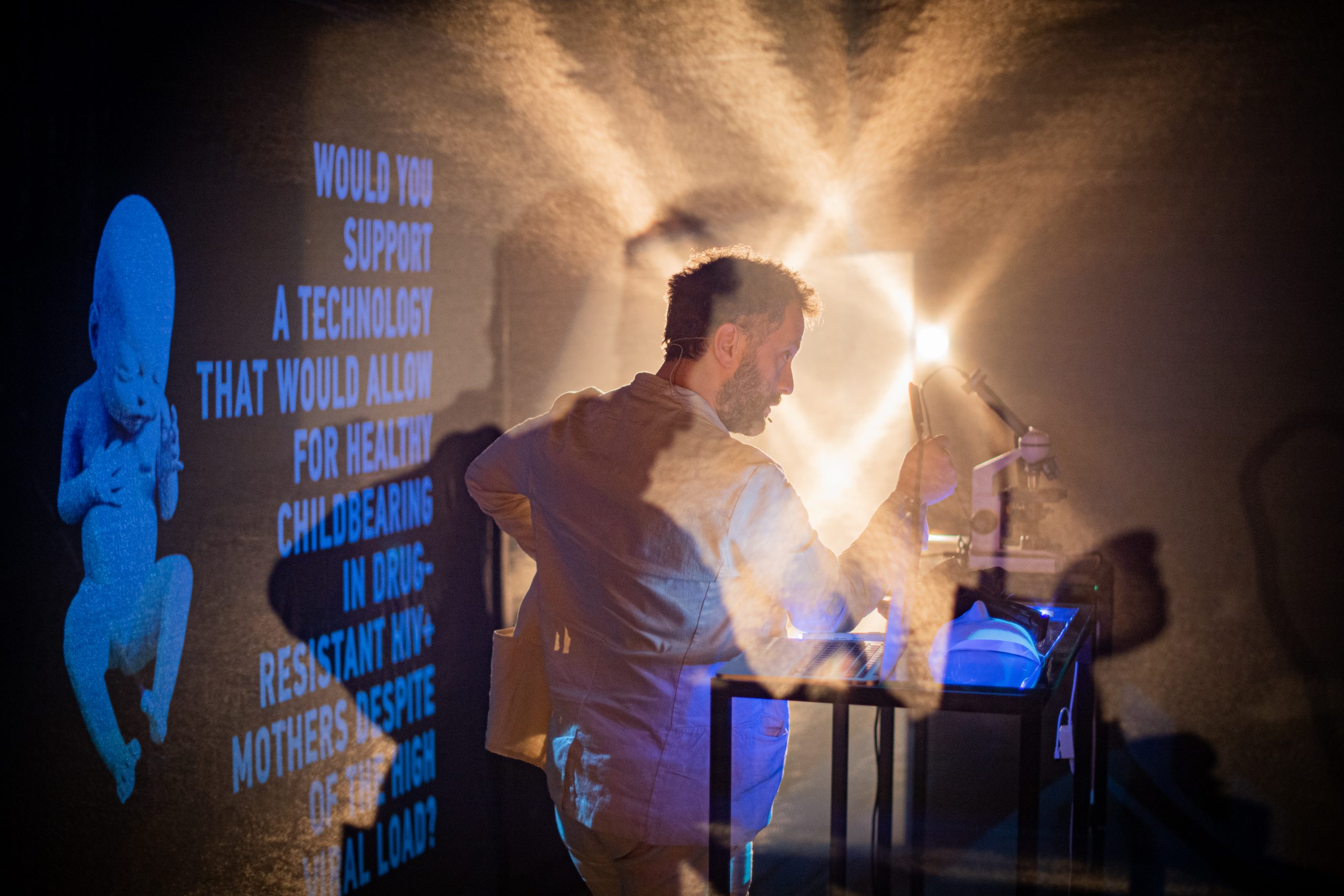 The format Bird & Carrot chose worked perfectly to illicit as much focus, emotion and thought from the audience as possible. The scientist was dressed in a white surgical jacket and stood in a transparent cube under complete darkness. He began by throwing a question directly to the audience. They reacted very responsibly voting for their response to the medical ethics problems posed to them. But the questions became increasingly more complex, tensions rose. That tension lasted for the next 60 minutes. I don’t remember focussing on anything that intensely even in my student years.

Kolmanovsky presented us with a colourful series of events in the history of gene therapy, full of facts, personalities, discoveries, political meddling, delusions, prison sentences and much much more. What we got was a weird and wonderful mix of biology and the life of the academic community involved set against a backdrop of political intrigue and futurist predictions. This was all accompanied by subtle visual and audio effects which gave everything an almost cinematic feel. You couldn’t help recalling ‘The Black Mirror’, but that was just a thought. 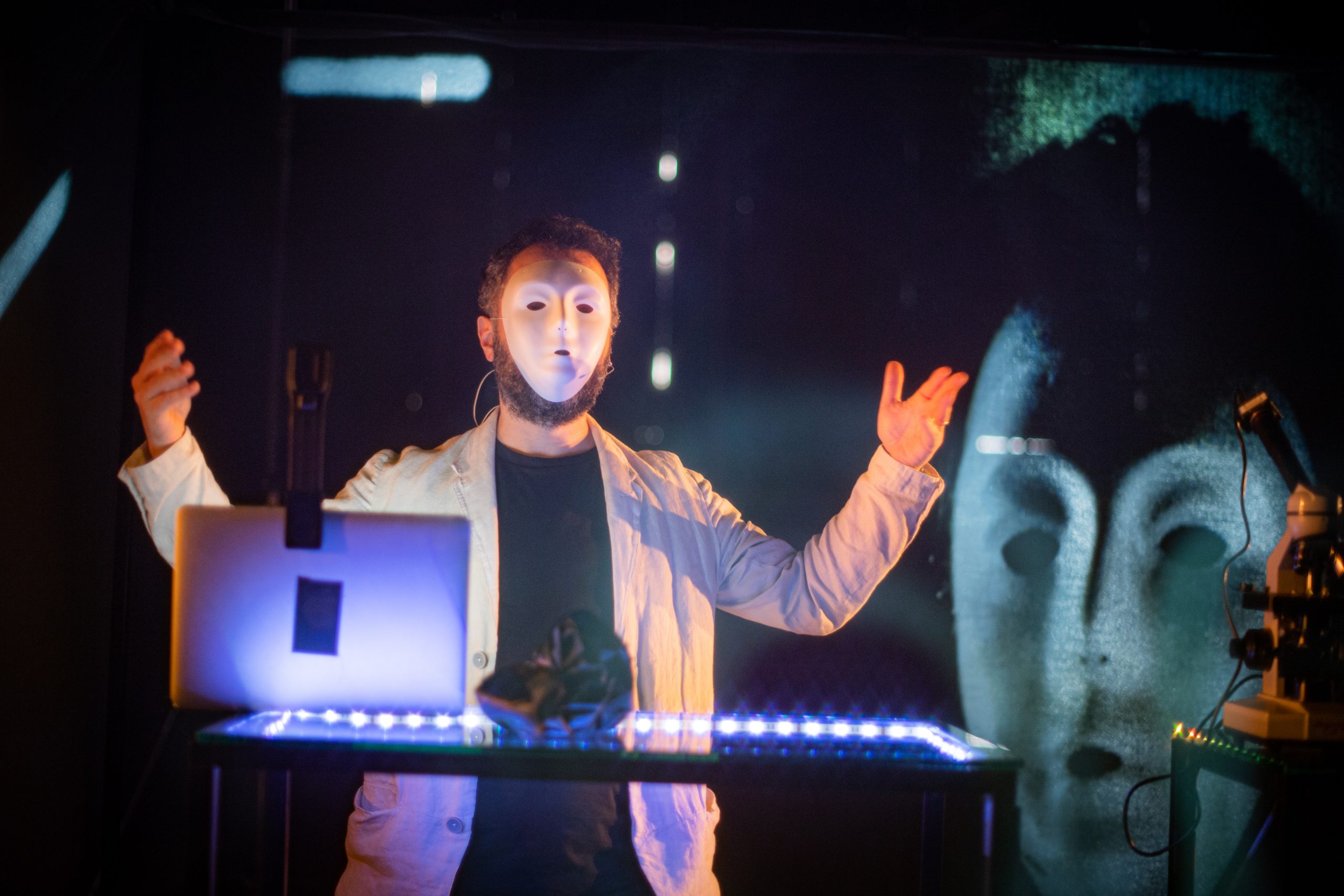 When Kolmanovsky finished his hour long performance and stepped out of his transparent cube the audience was left in slight confusion. Was that really the end, or would there be time for the classic Q & A? But that really was the end. As was the case in this show, many questions remained unanswered. It was up to each individual audience member to find the answers within themselves. Even my chatty teenage neighbours left rather more subdued and thoughtful.

In my opinion this is just what we all need – complex moral problems, based on hard facts in environments specially designed to maximise focus and immersion. Ilya Kolmanovsky and Bird & Carrot pulled this off beautifully.

May, June and July 2021 have been three months tha

“I doubt that lovers of Russian culture will com

We were delighted to have our contributor @essenti

This week will see the opening of the Up Close and

'Passionate and #ambitious women rule the House of

“it was a relief to arrive in darkest #Liechtens

Looking for a unique gift? We stock one of a kind

In honour of the late, great #Rezo #Gabriadze, Sta

The 2021 season’s most spectacular #opera is not

An exciting, #interactive musical #performance for

Join @pushkinhouselondon on 2-4 July for the onlin

If you’re looking for a new art exhibition to ex

If you missed one of @ysavikovskaya’s latest int