Interview with Gvido Trepsa, Director of the Nicholas Roerich Museum in NY 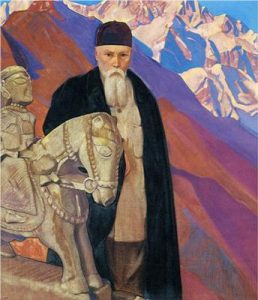 Rounding up the Russian Art Week in London, follows  the interview of our new US contributor Jonah Locksley  with Gvido Trepsa, director of the  Nicholas Roerich Museum in New York. Nicholas Roerich was born in Saint Petersburg in 1874, and is today a famous and honoured figure in Russia, Asia and in the West. He was a versatile artist: in his youth he was drawn to archaeology and ethnography, he was a prolific painter and  a successful stage designer, as well as famous writer of spiritual treatises who rallied for the preservation of culture. In his lifetime he was regarded as a guru, a prophet of a new religion, while also being rumoured about as a Soviet spy and a leader of Freemasonry.The Roerichs are also known to have stayed in London between 1919 – 1920, when Nicholas Roerich arrived to work with Dyaghilev as a set designer for the Royal Opera House in London. This interview discusses the spiritual sources of Roerich’s art and day-to-day workings if the Nicholas Roerich Museum in New York.

It is not an easy task to summarise the artistic contributions of Nicholas Roerich. His dreamlike work—though surely produced in the world of sense and matter—seems to exist on another plane, a phantasmic sphere where myths and legends reign supreme as tangible, all-pervading truths.  Indeed, in December of 1920, one reviewer in the New York Tribune spoke of Roerich’s “depth of imaginative power” and his ability to evoke the “strangeness of fairyland”, so much so that beholders would feel that this “fairyland has come true”. Similarly, in a review published in The Argus in 1927, Professor Alexander Kaun of the University of California, Berkeley, wrote that Roerich’s art “rises as a world apart”. It was, Kaun mused, “new yet hoary, strangely fantastic yet uncannily familiar”.

Evocative as they are, these descriptions merely encapsulate a kernel of Roerich’s overall capabilities. It goes without saying that he was a certifiable polymath, a Nobel Prize-nominee and explorer who—at the height of his fame—was the darling of intelligentsia and Illuminées on both sides of the Atlantic. His art was as polyvalent and chameleonic as his own life.  With soulful and seemingly effortless finesse, he painted everything from Old Rus and the last vestiges of Slavic pagandom, to scenes from The Koran and the Mahabharata. All the while, he lent his support to myriad humanitarian, pedagogical, and scholarly enterprises. 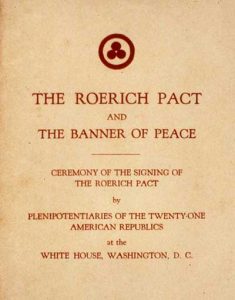 The title page of the booklet about the signing of The Roerich Pact.

For example, in the mid-1920s, Roerich and his family led an American-funded expedition to Inner Asia. According to Alexandre Andreyev, author of The Myth of the Masters Revived: The Occult Lives of Nicholas and Elena Roerich (2014), one of the putative aims of the trip was to gather more information on the existence of Shambhala, a paradisal land mentioned in Far Eastern folklore. Later, Roerich translated his desires for a future utopia into The Roerich Pact, a proposal for the universal preservation of cultural artefacts. Ratified by the U.S. government in 1935, the treaty has been described as  “a new path to international unity and permanent, world peace”.

Much can be said about Roerich’s lofty ideals, but far less has been said about the deep-set beliefs that informed those ideals. A disciple of Helena Blavatsky, he was very much interested in what she described as the psychic powers “latent in man”. In fact, it should not be forgotten that Roerich, along with his wife and muse Elena, syncretised contemplative practices by drawing from such diverse sources as Eastern Orthodox Christianity, Lamaism, Sufism, Theosophy, and Rigvedic mythology. These schools of thought and forms of religious expression all apparently factored into  Agni Yoga a system of spiritual alchemy developed by the Roerichs in 1920. It is in this system, as well as in the numerous artworks which adorn the walls of private and public galleries and museums around the world, that Roerich’s spirit lives on.

Like some never-dying sage, Roerich’s personality continues to escape the ravages of time by way of ensoulment. It constantly renews itself through the activities of those institutions which continue Roerich’s mission. For instance, in New York, a portion of Roerich’s soul—so to speak—rests in the New York Roerich Museum. Founded in the early twentieth-century, The Roerich Museum houses an extensive collection of Roerich’s art and also maintains a programme of educational events; all of which hearken back to Roerich’s promotion of cosmopolitanism, inclusivity, and high culture. To learn more about the history of the museum we spoke to Gvido Trepsa, its director.

Jonah Locksley: When were you first introduced to Roerich? What initially inspired you to learn more about him? What do you value most about his art (message, artistic style, technique etc)?

Gvido Trepsa: In 1977, in Latvia, which was then part of the Soviet Union, I joined an underground group of followers of Roerich’s ideas, mainly because of his non-materialistic message.

What do I value most? — Line and colour.

J.L.: : When did you start getting involved in the day-to-day activities of the museum?

J.L.: In what way has the museum most changed since you joined the staff?

G.T: Its mission has remained the same; the budget, however, has increased about threefold.

J.L.: : What can you tell us about your relationship with the former director, Daniel Entin?

J.L.:  It’s been said in recent years, particularly in the West, that Roerich hasn’t received the kind of attention he deserves. Do you agree?

G.T: No, I think in the West he attracts about the right amount of attention. He was a pioneer in many areas, but these have been well-nurtured by people who came after him, and it’s quite normal that those who planted the seeds are forgotten.

J.L.: : If so, why do you think that is, considering he was–at one point–one of the most famous artists living in America?

G.T.: Well, fame comes to those who find themselves in the right place at the right time, and who work at self-promotion, while immortality, like Cezanne’s, transcends the particular moment in the passage of time, and is more objective. I believe that overall, after, say, 100 years, every artist, Roerich included, comes to be treated more or less according to her or his real value. There are exceptions, of course.

J.L.: : As for Roerich’s art, Roerich himself cited his wife Helena as a driving force of his creativity. How much do we know about their creative and spiritual partnership?

G.T.: Well, they were very close. From the moment his paintings were finished, they were actually considered Helena’s property. Not a few were based on her visions. 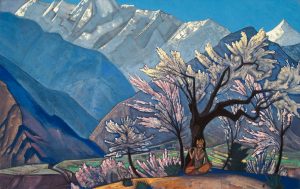 J.L.: In your estimation, what percentage of Roerich’s works are currently in the museum’s collections? Can you tell us a bit more about the museum’s recent acquisitions?

G.T.: Roerich left about 4000 paintings, studies and sketches. Here we have about 220. The State Museum of the Roerichs in Moscow has over 1000, the State Russian Museum in St. Petersburg — about 450, and the State Tretyakov Gallery in Moscow about 40. There are many paintings in India — in museums and in private collections.

J.L.: The New York Nicholas Roerich Museum has apparently maintained relations with the International Center of the Roerichs for years. What’s your view on the recent seizure of its collection by government officials?

G. T.: The expression “seizure of its collection by government officials” is wrong. The Roerich collection which you are referring to and which was recently returned to its rightful owner — the Russian state — was given, in the early 1990s, by Roerich’s son Svetoslav to the “Soviet Fund of the Roerichs”. Soon after it was seized by ICR and kept all these years, while the lawsuit against this illegal seizure by ICR was bouncing through the courts and endless appeals, etc. Finally, in 2016, the court of final appeal declared that ICR has no rights to this collection and that it should be returned to its legal owner, which at that moment was the Russian state. ICR refused to comply with the court’s order, so, after going through the necessary legal procedure and having exhausted all other means, the state took possession of its property in the way it did. 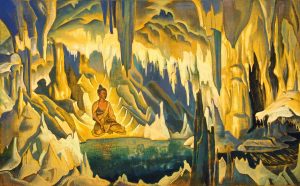 When dealing with Russia, and with a dispute involving the Russian State versus a public organization, there is a tendency to assume automatically that the state is wrong and the public organization is right. But as you know, every rule has exceptions and this is one of them.

J.L: How do you see the NYC Roerich Museum in the next ten or twenty years? What specific goals would you like to achieve?

G.T.: The main goal would be to ensure the longevity of the paintings. They are in need of conservation and of professional exhibition space (microclimate, etc.) Our budget so far has never allowed us to even start thinking about that. This year 2018 is the first year when we have been able to begin doing something along these lines. So, we hope to continue with this project.