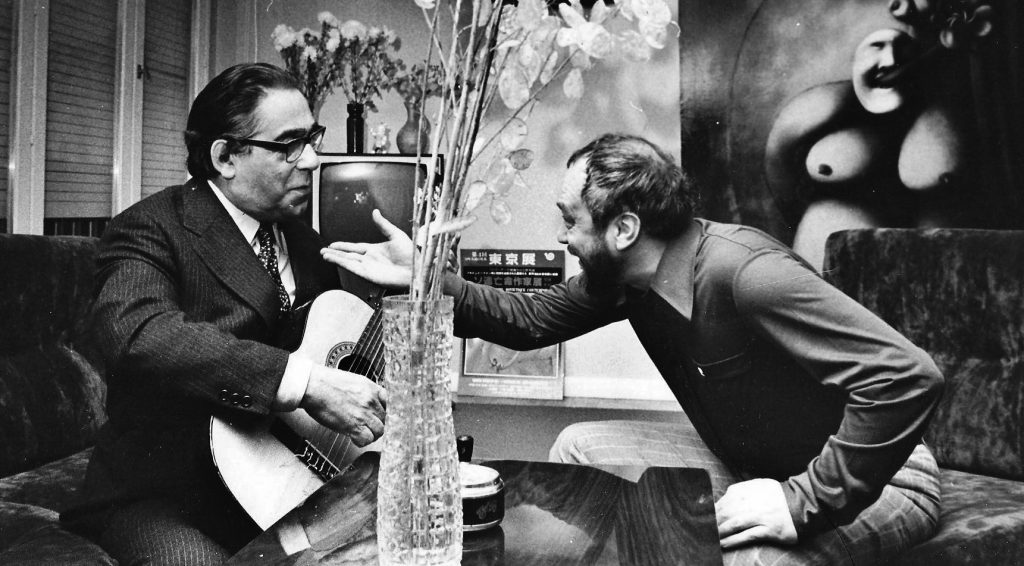 Although the Russian Avant-Garde is a powerhouse of the global art market, its figurehead collector remains a hazy presence in the public eye.

George Costakis (1913-90) was an exiled Greek whose menial jobs in foreign embassies left him enough free time to scour bargain-basement Moscow for pictures nobody wanted.

Or so the story goes. The truth’s a bit different.

Costakis was born and grew up in central Moscow. Although a Greek citizen, he felt Russian through and through. His childhood coincided with World War One, the October Revolution and the Civil War. His Greek-born father, a tobacco merchant, went bust. The palatial family apartment near the top of Tverskaya – servants and all – was exchanged for a kommunalka. George would live in a kommunalka until he was nearly fifty.

‘He had no higher education – he was a self-made man’ points out his daughter Aliki. ‘He started working at the Greek Embassy when he was 19. He married the same year. He didn’t have time to study. Maybe that’s good. His eye wasn’t spoilt by others.’

For a dozen years George Costakis worked as a handyman, chauffeur and caretaker at the Greek, Swedish and British Embassies in Moscow. For the next thirty he was Head of Domestic Personnel at the Canadian Embassy – and bought Avant-Garde art. He met Tatlin, Larionov, Goncharova, Rodchenko, Udaltsova and Chagall along the way. In 1962 he moved into his first private flat, on Leningradskoye Chaussée. He was already acquiring celebrity status in underground circles. Artists flocked to visit his Collection and seek his patronage.

By the time Costakis moved again in 1969, to a larger flat on drab Vernadsky Prospekt in south-west Moscow, diplomats, musicians and foreign VIPs – including Igor Stravinsky, Edward Kennedy, David Rockefeller and Pierre Trudeau – were beating a path to his door.‘It was hell!’ recalls Aliki. ‘We had dozens of people round every single night! He couldn’t say no to anyone!’

State authorities had kept an eye on this unorthodox art-lover since Stalin’s day. Costakis’s mother, aunt and younger brother spent time in the Gulag. His elder brother Spyros – the 1928 USSR Motor-Cycle Champion, would you believe! – suffered a fatal crash on his Harley-Davidson shortly after spurning NKVD attempts to recruit him. When George went into hospital to have a kidney-stone removed, he was subjected to bizarre heat treatment that turned his skin yellow and left him at death’s door.

The KGB would try, in vain, to get George’s own wife, Zina, to report on his activities. Pressure increased after George accused the KGB of being ‘worse than Fascists’ at the Non-Conformist ‘Bulldozer Exhibition’ in 1974. He was followed whenever he went out. Cars with giant aerials circled his apartment-block day and night. His flat was broken into (twice). His brother’s dacha outside Moscow, where he kept part of his Collection, went up in flames. He and Aliki avoided travelling in the same vehicle to ensure one of them would survive any ‘accident.’ At home, the family talked with the taps running or exchanged written notes. His grand-daughter Katerina was too scared to go to school.

By the time Costakis cut a deal with the Tretyakov to escape the KGB to Greece – a country of which he knew virtually nothing – he had acquired over 2,000 Avant-Garde works and become the most important Russian art collector since Schukin and Morozov. He had also endured James Bond levels of danger and intrigue. Yet the only account of this extraordinary life was written 24 years ago: George Costakis – A Russian Life In Art by Peter Roberts, First Secretary at the Canadian Embassy in Moscow from 1957-59. It has long been out of print.

In 1977 Costakis divided his Collection, leaving part to the Tretyakov. Even though ‘they didn’t want small things, just those with wallpower’ (reveals Aliki), these works would not be shown in the USSR until 1986. The ones Costakis took with him to the West enjoyed greater prominence: major exhibitions in Düsseldorf and the Guggenheim, with follow-ups at venues across North America and Europe.

Public enthusiasm for the blockbuster Costakis show in Athens in 1995/6, embellished by many works he had donated to the Tretyakov, prompted the Greek government to start negotiations to buy his remaining Collection. A deal was sealed in 2000 and the ensemble sent to Thessaloniki – the city of Culture Minister Evangelos Venizelos – to be housed in the Moni Lazariston, a converted Catholic monastery built in 1886… when Salonica was part of the Ottoman Empire, and the monastery loomed above open countryside. Today it is in suburban Stavroupol – a two-mile, 20-minute taxi ride from the city centre. 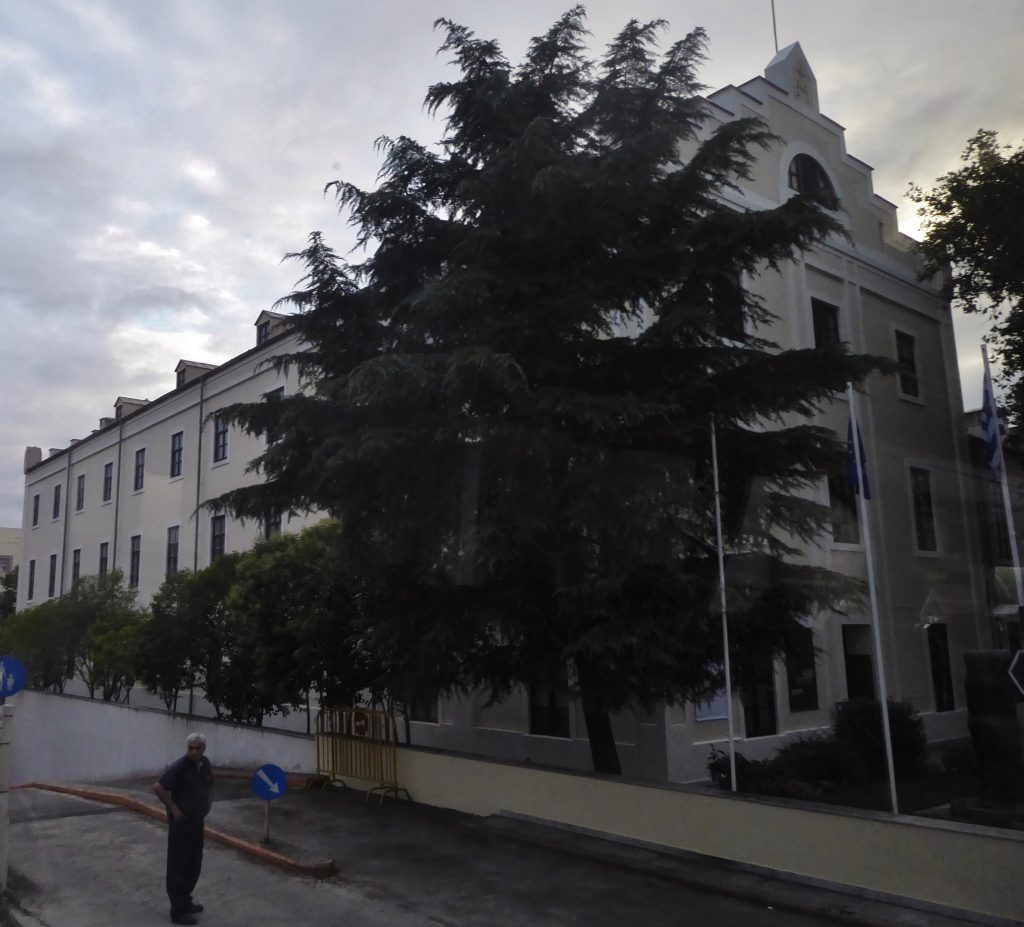 EVENTIDE AT THE MONI LAZARISTON

The Costakis Collection was obliged to share the monk’s former walls with Greek contemporary art from the State Museum’s permanent collection. As recently as August 2017 visitors expressed dismay at finding no Avant-Garde works on display.

Kristina takes up the story:

‘Maria was keen to get people round the table and talk.  She was looking for investment. Greece was in economic crisis. Government support for the Museum had been slashed. She decided to set up a board of trustees, consisting of people who would give financial support.

‘She invited me at the suggestion of Sasha Rytov, Director of the Stella Art Foundation. I came and had a good look round. When Maria said she wasvery open to any kind of dialogue, I asked her what her goal was. She replied that it was to attract attention and people, not just institutions. To get the public coming here – a wide audience, not just specialists.

‘I told her that, in my opinion, they needed to change the display and focus only on the Costakis Collection. We agreed it would be better to transfer the contemporary art to the Macedonian Museum across the city.

‘My idea was that people needed an explanation about the history of the Russian Avant-Garde and the personality of George Costakis. I don’t think Greeks really understand what kind of person he was and what kind of contribution he made. I also worked out a strategy for the next three-five years in terms of development – communication, exhibitions, scholarship programme, different stuff…. 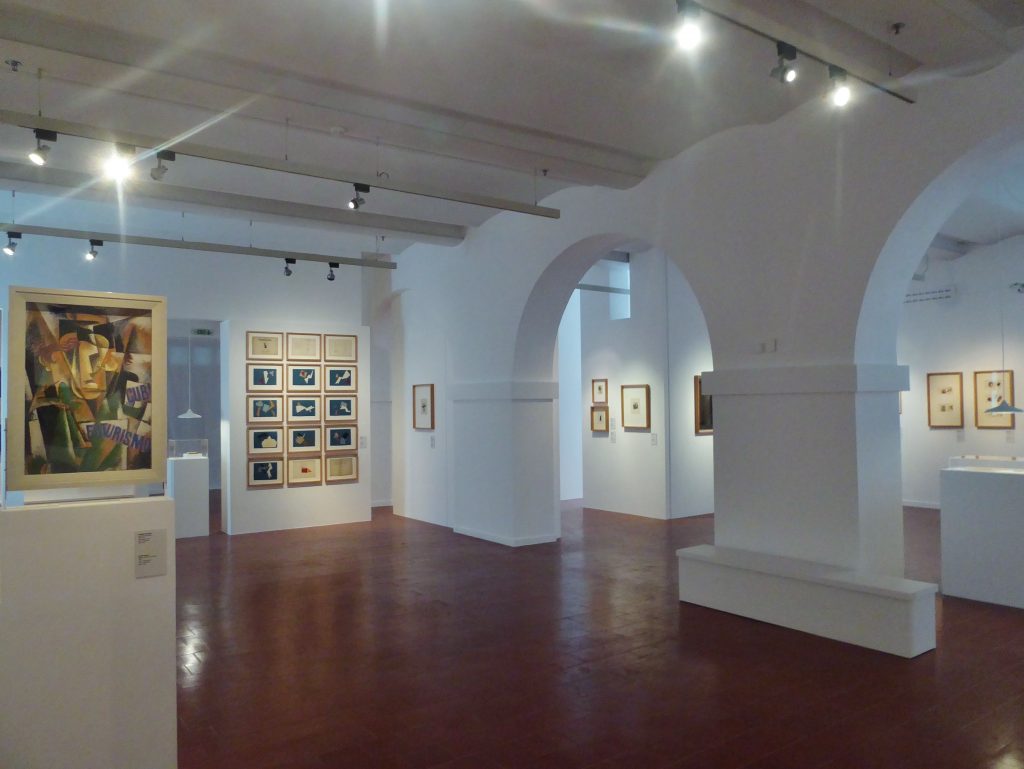 ‘The exhibition halls were redesigned by Kirill Asse and Nadia Korbut. They came here and were inspired. Look, they said, Avant-Garde floors – all red! The building is quite old. There can be a good dialogue between Avant-Garde art and this type of architecture, even if it’s not really suitable for displaying such art. We just needed to change the design of the rooms.

‘Kirill and Nadia analysed the whole Collection and created a wonderful architectural design. We took the most impressive, important things from the Collection, the ones that really talk about the history of the Russian Avant-Garde, and made a permanent display accessible to visitors at all times. What I would really love is for people who don’t know anything about Costakis or the Avant-Garde to visit the three floors and come away feeling they have understood something.’

Kristina also used her ‘network and resources’ to ‘bring people in from the outside who could be supportive.’

The most substantial support has come from Andrey Cheglakov, a maverick philanthropist who made his fortune selling Dendy video-game consoles in the early 1990s and bankrolled the Marussia Formula One racing team from 2010-15.

‘They’ve done a very nice job, especially as the monastery space is quite difficult to manage’ declares Aliki appreciatively. She and her daughter Katerina were guests of honour at the re-opening in June, which included an academic symposium, gala dinner, and rare performance of the 1913 Futurist opera Victory Over The Sun, with its Malevich costumes and zaumtext by Olga Rozanova’s husband Alexei Kruchonykh.

The new-look Museum’s ground-floor features a shop, early 20thcentury Russian Figurative works, World War One lubokprints by Malevich, Mayakovsky and Lentulov, and a roomful of Costakis memorabilia – including archive photographs; his guitar; his own 1989 painting Gulag, inspired by his visit to his brother at the Kotlas camp near Arkhangelsk in 1938 [below]; and a copy of the Spatial Construction (now in the MoMA) he was given by Rodchenko. 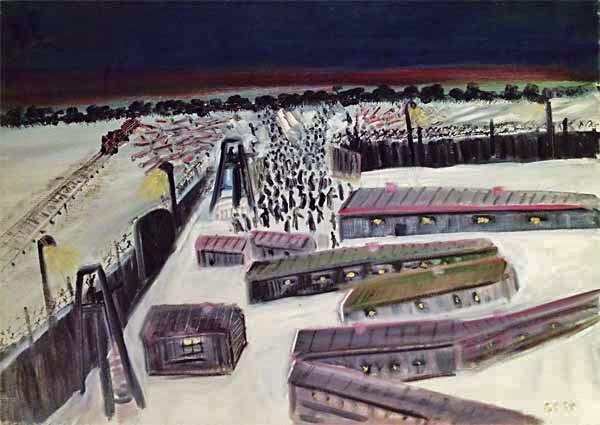 New archways and partitions elegantly divide the main halls on the two upper floors, providing extra wallspace. Costakis’s fabled array of Popovas are to the fore – many of them part of an extensive graphic ensemble that includes a plethora of coloured Suprematist works by Kliun and Udaltsova.

Rodchenko’s extraordinary creativity as an Avant-Garde painter, before he turned to photography,  is  an  exhibition  highlight. Less familiar names granted handsome tribute include Vasily Chekrygin, with his 1918, Zverev-like Resurrection [above]; Filonov’s follower Sulimo-Samuilo [below]; and Matyushin’s colourist disciples Elena Guro and Boris, Xenya, Maria and Yuri Ender. The startling Cosmic abstractions of Kliment Redko, Ivan Kudryashov, Mikhail Plaxin and Ivan Kliun stand in stark contrast to the taut, drab-paletted human dramas chronicled by Solomon Nikritin and Udaltsova’s husband Alexander Drevin, who – together with his compatriot Gustav Klucis (represented by a welter of sharp-lined designs) – was arrested as a ‘Latvian nationalist’ on 17 January 1938. Both were shot at Butovo, just south of Moscow, on February 26. 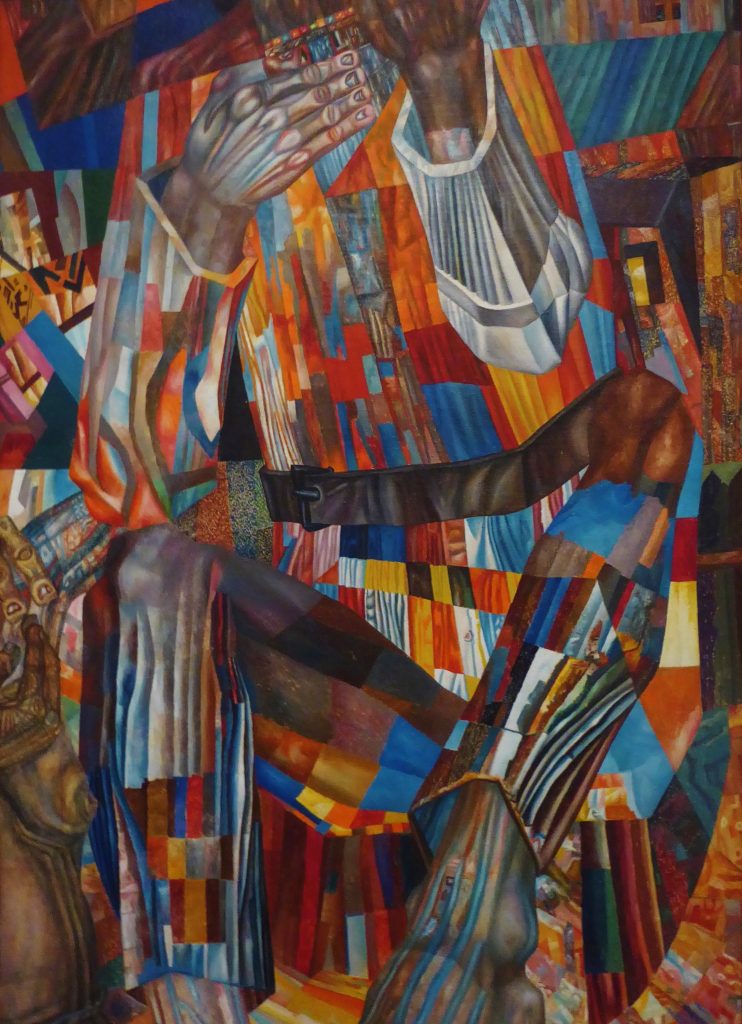 ‘It was very moving for me to encounter pieces I had not seen for decades’ acknowledges Aliki. ‘Bearing in mind that the Museum has a vast amount of the Collection’s archives, I hope collaboration will be increasingly productive. There’s a great opportunity to organize an Avant-Garde Research Centre!’ 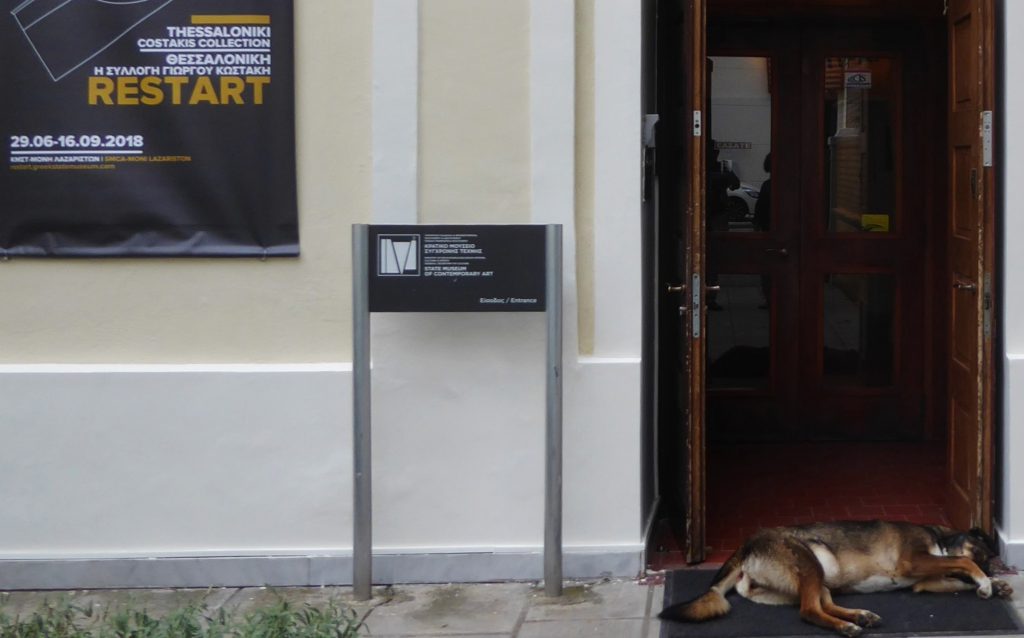 AVANT-GUARD-DOG: FEROCIOUS SECURITY IN FRONT OF THE THESSALONIKI MUSEUM

For a PDF version of this article, please click here