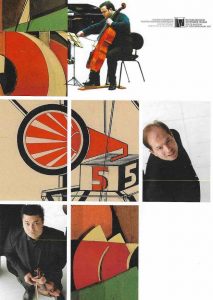 0, 2017 a musical evening with the Transcription Ensemble took place in the Athens Concert Hall Megaron. The group itself was formed in 2007, her members being Christos Grimbas (cello), Nikolaos Zafranas (piano) and Yorgos Kandylidis (violin). The group became popular among the Greek audience as well as outside Greece. Educated at internationally acclaimed institutions (University of Illinois in the U.S., Berlin University of Arts and the University of Folkwang in Germany, the Tussingen Music Academy, Graz Music University in Austria and the Brunel University in London), the three Greek performers toured throughout Europe with the repertoire of works transcribed for a small ensemble, and unknown to general public. On May 10, the Transcription Ensemble was in their usual element: their Greece Meets the Russian Avant-garde programme featured works of Alexander Scriabin, Alexander Krein, Sergey Prokofiev, Dmitry Shostakovich, as well as of Arthur Lourié, Paul Juon and other composers of Russian lineage.

These compositions dating to the first half of the twentieth century were accompanied by series of slides reproducing the works of the Russian avant-garde artists from the State Museum of Contemporary Art in Thessaloniki. The musical soundscape perfectly matched the visuals: mainly, the merit of Maria Tsantsanoglou, specialist in Russian Avant-Garde and director of the Thessaloniki State Museum of Contemporary Art. The idea to synthesize the aural and visual art was favoured by the art director Dimitris Maragopoulos, who organised the evening. The audience appreciated the combination of musical sounds, visual images and their interaction with the chosen architectural space. Overall, the audience had the chance to see about 200 slides of works by 40 Russian avant-garde masters, such as Rodchenko, Popova, Stepanova, Larionov, Goncharova, Klucis, Malevich, Matiushin, Kliun, the Enders, Filonov, Nikritin, Udaltsova, Pestel, Redko, Drevin , Ioganson etc.

The poem Listen! by Vladimir Mayakovsky was read at at the very opening of the evening, tuned the public in for the subsequent performance. The musical component of the evening was inaugurated by Alexander Scriabin’s Etude in C♯ minor, not in its original version for piano solo (the composer wrote it in his teens, as a fifteen years old in 1887), but transcribed by a founder of the Russian-Jewish School, Alexander Krein (1883-1951). The latter was much influenced by Scriabin, whom he knew personally from early on, but subsequently developed an interest in folk music, especially after using Jewish themes and melodies in his compositions. Ivan Klyun’s pastoral landscapes and village houses from the Kostakis were a perfect match for Scriabin’s Etude. It was followed by Arthur Lourié’s (1892-1966) Forms in the Air (Formes en l’air) dedicated to Pablo Picasso and composed in 1915 during Lourié’s experimentation phase. Once again, the visual series ran alongside the harmonically austere compositions, replete with Scriabin’s dissonances, creating a Cubist effects in music. They were echoed by Mikhail Larionov’s the Untitled, featuring the bright red sunset, as well as by works of Kandinsky and Picasso, complementing the music by Arthur Lourié.

Much less experimental was the Piano Trio No.3, Op.60 in G Major by Pavel Juon, the Russian-born Swiss composer, brother of Konstantin Juon, Russian painter and theatre designer associated with the World of Art (Mir Iskusstva). This Trio, composed in 1915, comprised three movements (Moderato assai, Andante cantabile, Risoluto, ma non troppo allegro) and followed a comparatively less radical musical programme. As Juon’s piece was being performed, it was synchronised with the geometric images of spheres, geometric shapes and colour stains, which soared in space, as if not subject to any gravitation laws. The second part of the evening began with the fragment from Dziga Vertov’s Man with a Movie Camera. Straight after, the Transcription Ensemble performed a selection of Prokofiev’s famous early work Visions Fugitives (1915), transcribed for the Trio but still retaining its original vibrant, fragmentary character. The visual narrative for Sergei Prokofiev’s Visions comprised colourful spots, strange objects and human silhouettes. Particularly noteworthy was the image of Pavel Filonov’s Head.

The evening ended with Shostakovich’s Piano Trio No. 2 in E minor, for violin, cello and piano, Op. 67. It was composed in 1944 and is made of four movements (Andante, Allegro con brio, Largo, Allegretto), with the Jewish theme from his famous String Quartet No. 8 re-appearing in the final movement. Artistic images, selected for Shostakovich’s work, were the most revolutionary and politicized, as if encapsulating the whole evening: among them were Lubov Popova’s propaganda posters All for a Rally!, Forward to Communism! from the series Earth in Turmoil (1923), as well as Music and Revolution.

Such synthesis of the arts, bringing together video, music, poetry and fine art throughout the evening, gave fertile ground for the variety of interpretations. The paintings projected during the concert helped to understand initial ideas of the composers, simultaneously demonstrating the intensity of the relationship between the Russian Avant-Garde music and painting. As a result, one could trace the whole set of experimental tendencies in music and visual arts between 1910 and 1930. It is most regrettable that a significant bulk of the Russian avant-garde music still remains unknown to the general public, as well as the names of such outstanding composers as Yavorski, Mosolov, Protopopov, Feinberg, Obukhov, Wyschnegradsky, whose works are still mainly absent from the classical concert repertoire. Even more resaon to be grateful for the Transcript Ensemble’s enthusiasm. 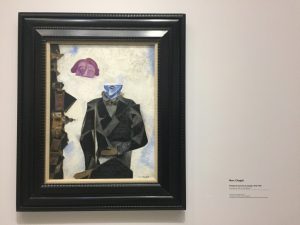 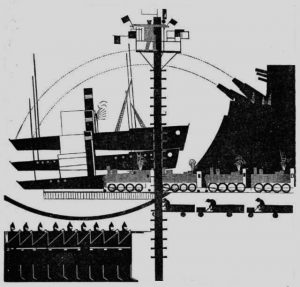