Renowned for its opulence, Olgovo was once one of the richest estates in the Moscow region. Owned by a noble family for nearly two hundred years, it had a rich history – and an impressive art collection. After the 1917 revolution, the collection was nationalised and for a short period in the 1920s the estate became a museum, before later falling into ruins.

The artist Igor Grabar (1871-1960) first visited Olgovo in 1919, together with other members of the All-Russian Commission of Museums, with the purpose of preserving the spirit of the disappearing noble estates. Grabar’s painting, Room Interior in Olgovo in 1850s, which is one of the highlights of The Russian Sale at Bonhams New Bond Street, London on 9 June, certainly archives that aim. The captivating work has an estimate of £80,000 – 100,000. 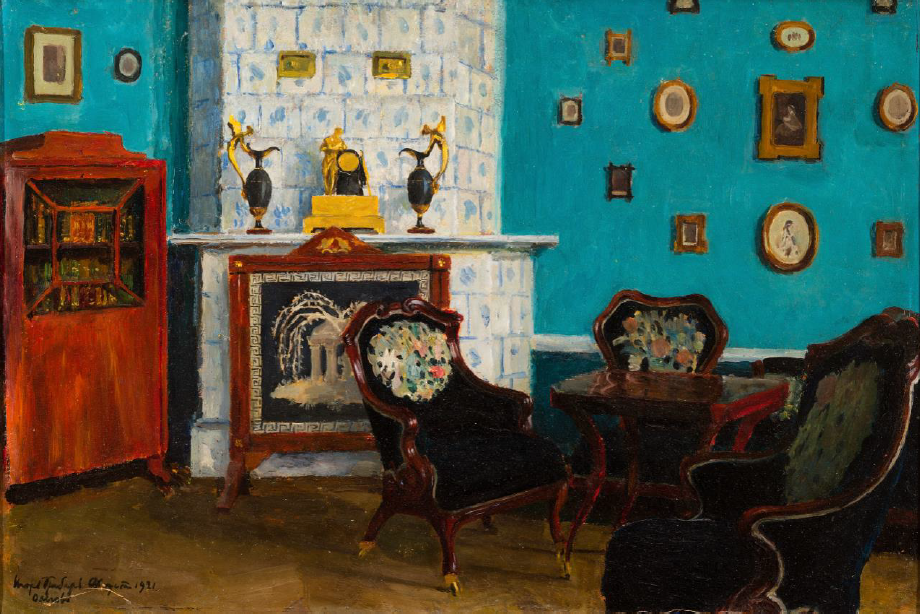 Director of Bonhams Russian Department, Daria Khristova, commented: “Grabar’s Room Interior in Olgovo in 1850s returns the viewer to the past. The painting is, in part, a historical document capturing the room’s enchanting details: jugs, clocks in the Empire style on the mantelpiece, portraits on the walls and a Chinoiserie-style fireplace screen. Appearing as if the owners had only stepped outside a minute ago, the empty room at Olgovo emits a feeling of nostalgia and the passing of an era. In 1921, when the work was painted, constructivism prevailed, and it was no longer possible to imagine life in decorative interiors. The Post-Impressionist Igor Grabar rarely addressed the theme of interiors in his paintings, and this is a rare – and particularly appealing example – painted during the peak of his artistic maturity.”

Photograph the room interiors at Olgovo depicted in the work

From 1740 to 1917 Olgovo belonged to the Apraksin family. The Apraksins were enthusiastic collectors, and they consequently filled the home with paintings, sculpture, porcelain and furniture. The owners of the estate were famous for their hospitality, regularly holding balls, hunting trips and staging performances in the fortress theatre, attracting guests from nearby Moscow. Later, the estate became a museum, which was disbanded in 1925-1926.

Igor Grabar (1871 – 1960) was a Russian post-impressionist painter, restorer, writer, publisher, and historian of art. He trained as a painter under Ilya Repin in Saint Petersburg and Anton Ažbe in Munich and spent time in Berlin and Paris. In 1901–1902, Grabar presented twelve of his paintings at an exhibition hosted by Mir Iskusstva. They were considered to be the first “truly French” impressionist works displayed in Russia by a Russian painter; one of the works went straight to Tretyakov Gallery, others were auctioned to private collections. In 1905, Grabar travelled to Paris to study the new works of French post-impressionists and changed his approach. The depiction of snow remained one of his favourite subjects.

Between 1910 and 1915 Grabar edited and published his opus magnum, the History of Russian Art. In 1913 he was appointed executive director of the Tretyakov Gallery. Grabar diversified the Tretyakov collection into modern art and in 1917 published its first comprehensive catalogue. In 1918, Grabar took the lead of the Museums and Preservation Section of the Soviet Government, the Museum Fund and the Moscow-based state restoration workshops – becoming de facto chief curator of arts and architectural heritage for the whole Moscow region. In 1921 he became the first professor of Art Restoration at the Moscow State University. Grabar supervised and exhibited work in a number of international exhibitions.

This work is a rare and important survivor of Burliuk’s avant-garde works painted in the Soviet Union before he emigrated in the early 1920s. In contrast to the artist’s impressionistic paintings, which were in demand by private collectors even in Soviet times, his avant-garde works were not taken seriously, and many were destroyed. After Burliuk settled in America, he attempted to recover some of his “Moscow” artworks, hoping to include examples of his early works that would visually reinforce his proud title of “father of Russian futurism”, for an exhibition he was planning in New York with Igor Grabar. In the end he was unsuccessful and since the 1960s, the painting has been in the collection of the director of the Russian Museum, Vasily Pushkarev, who actively sought and collected works of “leftist” artists. The work is the earliest known example of Burliuk’s later favourite still life construction, in which, along with household items, his own works are used. 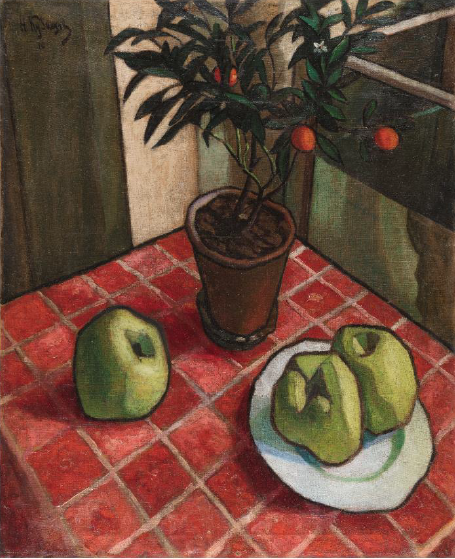 In the 1910s, the genre of still life became a laboratory for artists to experiment with styles – especially evident with the Jack of Diamonds group, which brought a riot of colours to Russian paintings in a statement that the avant-garde artists have arrived. During his membership in the Jack of Diamonds group, Kuznetsov created a series of paintings, mostly still life works, using the experience gained from Matisse, with whom he studied in Paris in 1907. Still life with apples and an orange tree, 1916, is an excellent example of innovations in the still life genre. Works by Nikolai Kuznetsov are mainly found in museum collections and are almost never offered at auctions.

These three large-scale works come from the collection of American surgeon John Ignatius Perl (1896-1972). Like Anisfeld, he was an immigrant from Eastern Europe, born and raised in Hungary, and the first of his family to receive an academic degree. He arrived in America in 1924 and settled in Chicago, where he learned English while working to confirm his medical qualifications to practice medicine in America. Besides his passion for medicine, he was fascinated with visual arts. In 1942, without formal art education, he took up painting as serious vocation. In just a few years he became a prolific painter, actively exhibiting and winning a number of prizes at regional fine art competitions. He even tried his hand at frame-making – and all the frames on the Anisfield paintings in this sale were made by Dr. Perl. 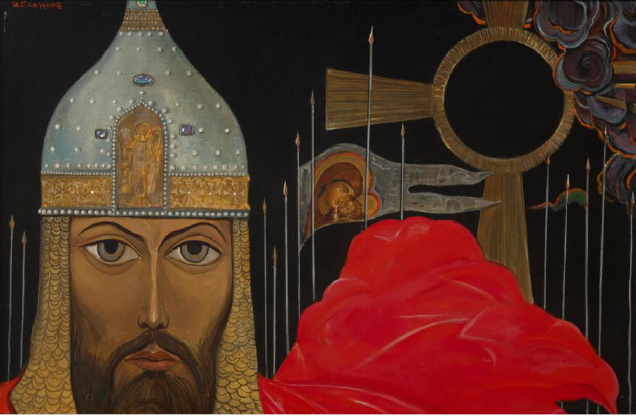