Russian animation, best known for its loveable characters on the small screen, has been bold and distinct in character from its inception. Some of its characters made during the communist period have reached almost cult status: for example, Cheburashka, a beloved teddy bear/orange hybrid which bagged itself a place on the Russian Olympic Team uniform in 2004, 2006, 2008 and 2010, as well as Rabbit and Wolf. These were distinctive television figures in the USSR which held a distinctive artistic quality directly reflective of the art scene of the time which largely circulated a template stylism of satire, political posters and pamphlets. In the 1970s, owning a TV set became part of normality and as a result, animation, mainly aimed at children, became accessible to around 93% of the population. It was known to be a vital source of moral values – promoting the foundations of the USSR and often using the traditions of folklore. 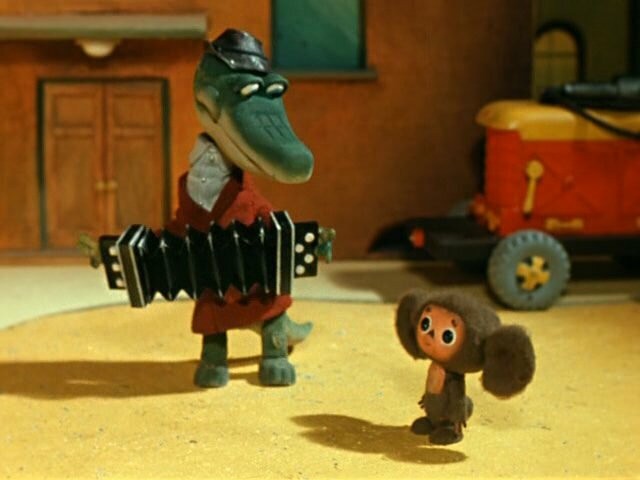 The origins of Russian animation and arguably all stop-motion animation, began with a focus on form and human movement, influenced by scientific preoccupations at the time. It has been accredited to the Russian ballet dancer Alexander Shiryaev (1867-1941), who served as the lead character dancer and ballet master at the Mariinsky Theatre. Shiryaev made his first stop-motion film in 1906 on a 17.5mm film Biokam camera that he had purchased in London. 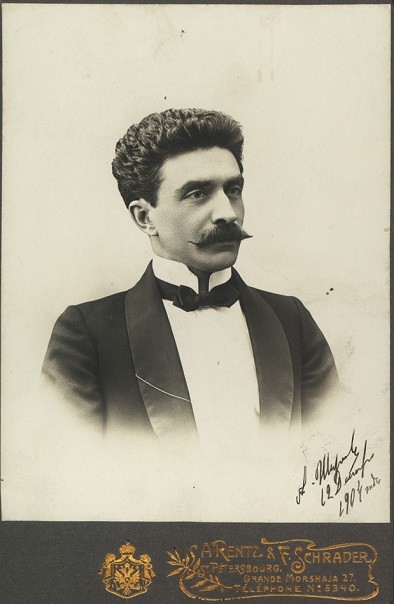 Starting with fine line drawings to capture the movement of dance, Shiryaev soon moved to model animation. It was not an interest in animation that inspired Shiryaev but the study of human plastics. He would make his 20-25cm characters from papier mache or clay, attaching limbs by wire, filming them frame by frame as they recreated various ballets in a homemade toy theatre. One example is a trimmed version of the ballet ‘Harlequinade’, renamed ‘Harlequin’s Jest’ for the 15 minute animation made in 1909. This was a ballet Shiryaev had previously performed in with ballerina Olga Preobrazhenskaya who had a famously distinct style of turning the fouette, which experts have observed in the puppet’s movements. Shiryaev had acute knowledge of the human form and its dexterity which allowed such pioneering stop-motion to be made at the time – though his work has only been discovered and celebrated posthumously.

In the period following the 1917 Revolutions, modernists continued to dominate the artistic vision of animated films. Directly influenced by propaganda, artists including Sergei Eisenstein, Alexander Dovzhenko and Diga Vertov made the initial developments of animation in Russia. However, drastic changes took place in 1934 when Andrei Zhdanov prescribed Socialist Realism as art’s new canon at the Soviet Writers’ Congress. Modernist experiments were now out of the picture – the focus was on children and conveying a nationwide model of morality, whilst commenting on contemporary society. Up until 1934, folklore had, in general, been viewed as a remnant of feudalism – however, it was later considered the perfect vehicle for teaching moral values to children. Thus, Russian animation shifted from modernism to a more Disney-inspired model. Although Disney animation was characterised by plastic moment and Soviet animation was simpler and more cartoon-like in design, they both chose similar stories with simple moral formulas for their audience. The appeal of folklore was that it was founded in nationalist pride and heritage which would become a trademark of Soviet animation. The first film to be made in this way was ‘Fairytale about Tsar Durandai’ (Сказка о царе Дурандае) in 1934, created by the Brumberg sisters and Ivan Ivanov-Vano. It a story taken from a classic Russian fairytale. The film is undoubtedly a triumph of its time – animated black and white sketches based on Russian folktales. Unfortunately, only the first part of the film survives to this day. In the film we were presented with the greedy and powerful King Durandai who, in marrying, meets his match when his wife usurps the throne.

From this period of preoccupation on folk tales came animations of the likes of ‘Little Tower’ (1945), ‘Fairytale about a Soldier’ (1948) and ‘Geese Swans’ (1949). Russian folklore often took material from Aleksandr Pushkin, including ‘The Tale about Tsar Saltan’ and ‘The Tale about a Priest and his Labourer Balda’. Not all folkloric animation derived exclusively from folklore – ‘Wolf and Rabbit’, for example, though not embedded in a specific oral or written story, drew a strong likeness to folklore tales of the ‘trickster’ – the Russian equivalent of Looney Tunes characters. In a similar notion to folklore, Hans Christian Anderson’s tales were especially popular in the Soviet era – this has in part been accredited to his exploration of social inequality, with the tales of The Snow Queen and Thumbelina being two of his most established works to come to life on screen. Perhaps one of the most aesthetically recognisable folk tale animations is ‘The Scarlet Flower’ (1952), directed by Lev Atamanov. Tonal reds drench the film from start to finish, as it follows the effects that a sea merchant and his family face after he brings a ‘scarlet rose’ back from his travels.

Across the Eastern Bloc, the house spirit is a known element of oral tradition –  these spirits would personify spaces, residing in the house, water and countryside. The belief in place spirits is still alive today, oral tradition has passed down accounts of interactions with such spirits which have in turn become legends – terrifying forces that can threaten the lives of humans. The house spirit concept inspired the ‘Domovenok Kuzia’ series in the 1980s, and the forest spirit features as the central character in Maria Mouat’s ‘Uncle Au’ (Дядюшка Aу) series (1979). In the claymation series about Uncle Au, the typical depiction of the fearsome forest spirit is inverted and actually becomes farcical – as Uncle Au is a small, all too human man – he dresses in ‘spooky’ outfits to try to live up to the reputation that tradition dictates, attempting to scare children. But the kids see past Uncle Au’s endeavours – instead they treat him as entertainment – perhaps an unspoken suggestion that folklore was to be understood in a metaphorical sense and not as literal, in the USSR.

Soviet animation often depicted Russia through metaphor. One example is in the animation from Soiuzmul’tfil’m, Little Hut (Terem Teremok, dir by Leonid Amalrik) from 1971. The nations of the USSR are depicted as friendly animals, including a mouse, frog, rabbit and rooster. A small but quaint hut on stilts is situated in a forest, initially only one animal inhabits the hut, then slowly other animals approach and ask if they can join the household. The message is clear – neighbourliness is good, both on a micro and macro level. To justify each new occupant’s place in the hut they must explain how they will be of use to the household and to their created society. Upon their admission, all the animal inhabitants gleefully go about helpful jobs together, mostly outside amongst nature or carrying out domestic tasks in the hut – they play instruments with one another and most importantly live in harmony, as the nations of the Soviet Union were expected to do. Then, the representation of Russia arrives as a bear – the bear is too large to fit in the hut, they try to squeeze in but when it fails they sit atop the hut to benefit from some of the warmth. The hut collapses, sending the animals inside flying, with the bear sitting atop the logs that once made up the hut. The bear apologises and builds them a new house, stronger and more beautiful with multiple floors. The bear, who had once seemed scary due to its size, is now welcomed gladly by the other animals as they witness the benefits that size and strength have when building a home – perhaps a metaphor for the indomitable landmass of Russia.

By 1986 150 million people watched TV news every day (80% adults). The evening news was in fact immediately followed by a children’s programme called Spokoinoi nochi (Goodnight, Little Ones) – the status of this programme in prime time viewing highlights that Russia truly was in its golden age of animation, often credited to the 1970s and 1980s. Though there was a circumscribed restriction on storyline if you were a film-maker in Soviet Russia, this centralisation of state-funded filmmaking was liberating for some animation-makers – as they didn’t need to arduously seek funding from individuals before a project could begin, meaning that production value could often be large.

With the end of the Soviet Union, filmmaking was no longer centralised – it became privately owned and commercialised. This is not to say that Russia’s ‘Golden Age’ of animation is simply a relic of the past, on the contrary, it was only the start of what was to come. The schooling of animation still thrives to this day in Russia, supported by the opening of the SHAR animation training studio in 1993 by animators Yuri Norstein, Fyodor Khitruk, Andrei Khrzhanovsky and Eduard Nazarov. Modern animators including Yuri Norstein (the creator of Hedgehog in the Fog, 1975) and Aleksandr Petrov who famously directed The Old Man and the Sea, an oil paint on glass animation, have created masterpieces that are accessible to both children and adults, with universally appreciated lyricism and beauty. Child-centered animation still largely dominates animation as an artform, which has in more recent years created internationally popular animations like ‘Masha the Bear’, premiered in 2009, which has now been running for 8 seasons.

Through Russia’s animation repertoire it is possible to contextualise specific moments in history, of a country which has undergone vast changes in the last century and more. The narrative structures of folklore and its traditional imagery undoubtedly played a key role in defining the stylistic elements of Russian animation aesthetics for years to come, an artform which ultimately remains distinctive in its craft, continuing to serve as a language we all speak.