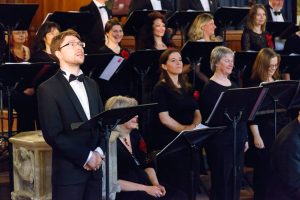 In June 2017 a rare piece by Alexander Kastalsky, Requiem for Fallen Brothers, which had laid forgotten for many decades, was performed by Russkaya Capella in Glasgow. The choral work was composed in 1917.

The Russkaya Cappella is a unique musical Russian-British collaboration, a mixed chamber choir with a wide repertoire drawn from Russia’s rich musical heritage, sadly unfamiliar in the UK: from sonorous and emotionally charged church music to vibrant and earthy folksongs, all sung in Russian and mostly unaccompanied. The choir’s sights are firmly set on the highest standards of musicality and linguistic authenticity.

Svetlana Zvereva and Stuart Campbell are musicologists and the co-Musical Directors of Russkaya Cappella. Dr Zvereva’s area of expertise is the music of Alexander Kastalsky (1856 – 1926) who composed liturgical and secular choral music in the neo-Russian style until 1917 and was a significant influence on a composer such as Rachmaninoff. A number of Kastalsky’s works including his major oratorio Requiem for Fallen Brothers were not performed for many decades after their composition. Ashley Holdsworth has kindly interviewed the founders of the capella, Svetlana Zvereva and Stuart Campbell,  whose research and dedication made the June premiere of Kastalsky’s oratorio possible. She asked Svetlana and Stuart about how Kastalsky’s music was marginalised during the Twentieth Century, and how the process of re-evaluation of his legacy began  in the Twenty First.

AH: How did you originally learn about the Requiem?

SZ: The work became known to only a very narrow circle of specialists because it was published right on the eve of the revolution. It is dedicated to the first world war and its victims. In Soviet historiography that war was regarded as an Imperialist war and therefore was little discussed over several decades. The score lay on the shelves but no one took any interest in it because there was no hope of performance. Evgeny Svetlanov conducted performances and a recording of it in the 1970s but with a completely remade Soviet patriotic text. But originally the work was fundamentally a piece of religious art, which was another reason why it was not liberated from the shelves during the Soviet period. It is founded on melodies from the Russian Orthodox, Roman Catholic and Anglican churches. It’s a unique interdenominational religious work drawing on different musical traditions. And naturally once it became a little bit more current people have begun performing it in various countries for various reasons. AH: How did it come to be rehabilitated?

SZ: The version that’s been done most is the one I found in the archive, which is with organ alone. This version is comparatively realistic for performers in different countries because it has organ, chorus and soloists, and the text is provided in three different languages: Church Slavonic, English and Latin. The composer allowed the singers to mix the languages. For example, if it’s performed in Russia one might expect it to be performed primarily in Church Slavonic. The second version of Kastalsky’s Requiem is very difficult to perform because of the huge resource demands it makes — chorus, large orchestra and organ — and it has rarely been performed. The third version is a cappella with canonically singable Russian Orthodox texts but it is also very demanding for performers. The third version is perhaps equivalent in status to the ‘All Night Vigil’ of Rachmaninoff and its time is still in the future.

SC: Kastalsky did not have much experience of writing for organ, and in any case organs and organists tend to be in more places than the choir are, so there are problems of contact. AH: You spoke to Graham Hair, who is a composer. SC: We asked his advice on how to solve the problem; we thought he might suggest two pianos, for example. His suggestion was, ‘if you like, I’ll arrange it for string quintet, and the advantage of string quintet is that you can put the players immediately beside the singers and they are much more helpful than an organ.’ AH: So,  you transformed an unedited manuscript into something that is singable by a chamber choir? SZ: Exactly, it is an edition of the future. It is really great material for choirs; it can be performed in all sorts of places for different occasions, and with organ or string quintet. For instance it was performed in Israel, by way of drawing the sting out of some act of terrorism in the vicinity. Strathclyde University Chamber Choir took a performance to Moscow, but with organ, not string quintet. The string quintet is ours! AH: The Requiem has been compared to Britten’s War Requiem. SC: It is a good analogy in so far as they are both works which use the word ‘Requiem’ and some ingredients of the Roman Catholic and Anglican Mass for the Dead in combination with other material, both musical and otherwise. They are alike in both being hybrid works. 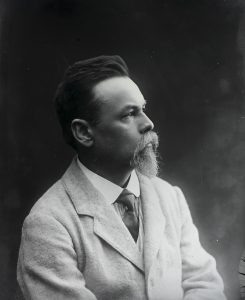 SZ: But Kastalsky used the idea of combining tunes from three religions. SC: Britten intended the work to be sung by Galina Vishnevskaya, Peter Pears and Dietrich Fischer-Dieskau; he was drawing three nations who had previously fought together, and there is first world war poetry by English poets but no melodies from different church traditions. AH: In the 1920s Kastalsky changed focus, writing secular music. SZ: Even before the revolution he had composed sound pictures of music in ancient Novgorod, for example. He anticipated Stravinsky’s works such as ‘Renard,’ based on Afanasyev’s folk tale. Kastalsky was greatly drawn to Art Nouveau style, which found expression in architecture and painting, and in music. Graham Hair wondered why Kastalsky had such strange melodic outlines, which don’t go where you expect, and my answer is that the musical language of ‘Requiem for Fallen Brothers’ is also the language of Russian Art Nouveau. He composed one opera, Clara Milich, and he sometimes thought rather cinematographically; even in Requiem for Fallen Brothers one finds that one kind of scene is suddenly succeeded by an apparently unconnected scene very immediately, like a series of pictures. AH: Russkaya Cappella ended its recent concerts with another Kastalsky piece, Troyka to verse by Oreshin, a poet from Esenin’s circle. SZ: An absolutely unusual work! It corresponded with Constructivist art of the time, as well. This symbol of the Troyka, the coach drawn by three horses, flying very uncontrollably and very destructively through the air. The red horses are also symbolic. You can see them on icons and in paintings, for instance. If you look at the art of Petrov-Vodkin or Roerich, you will find a boy on a red horse , and the troyka motif is also found in a painting by Vladimirov from 1919, showing some mad ride, goodness knows where, with unimaginable energy, brightness and clarity. AH: Do you have any other recommendations that readers of Russian Art and Culture might enjoy listening to or even performing themselves from Kastalsky’s choral work? SZ: They should listen to our recording of Requiem for Fallen Brothers accompanied by string quintet from Scottish Opera, which will be released later this year. 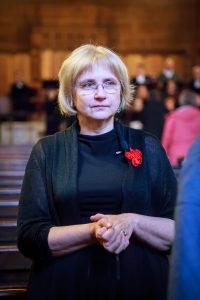 Svetlana Zvereva is a graduate of the Leningrad Conservatoire and an established specialist in Russian sacred music now working at the Institute for the Study of the Arts in Moscow. She is the author of around 100 scholarly articles concerned with Russian sacred music of the late medieval period and the late nineteenth / early twentieth century, and music and Russian Orthodoxy in the Russian emigration. Since 2002 Dr Zvereva has been working on the history of the Russian diasporas. A symposium she edited entitled The Russia Abroad: Music and Russian Orthodoxy was published in Moscow in 2013 and she is now completing a monograph entitled Music and Russian Orthodoxy in the Russian Emigration: History and Sources. Dr Zvereva is co-Musical Director of Russkaya Cappella. 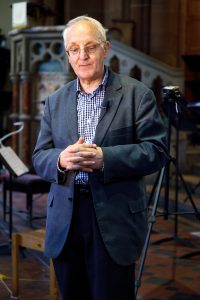 Stuart Campbell was Lecturer in Music, University Organist and Director of Chapel Music at the University of Glasgow. He compiled, translated and annotated two volumes of an anthology of criticism (Russians on Russian Music) published by Cambridge University Press in 1994 and 2003, as well as contributing entries on Russian topics to the New Grove Dictionary of Music and Musicians, second edition, and on Russian and Scottish topics to Die neue Musik in Geschichte und Gegenwart, the dictionary’s German equivalent. Dr Campbell is a member of the Editorial Board of the Critical Edition of the Complete Works of Sergei Rachmaninoff and a trustee of Musica Scotica. Current projects involve aspects of Musorgsky, Shostakovich and Stravinsky. He is co-Musical Director of Russkaya Cappella.

Other Articles By Ashley Holdsworth