Calvert 22 Foundation and MUBI are delighted to present the London premiere of Oleg y las raras artes (Oleg and the Rare Arts) as part of New East Cinema, the programme of contemporary cinema from the New East curated by The New Social.

Director Andrés Duque will join us via Skype after the screening for a Q&A with music producer Stephen Coates to talk through this award-winning new film, which follows the extraordinary Russian pianist and composer Oleg Karavaychuk. 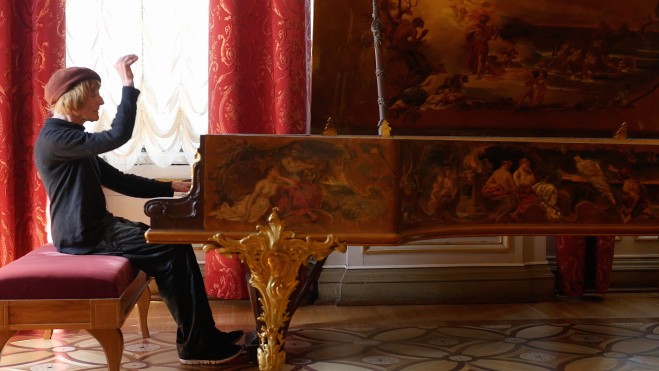 Who is this man who looks as if he stepped out of a story by Gogol?

The legendary Oleg Nikolaevitch Karavaychuk is the mysterious and moving subject of this loving film by the director Duque. He was moved by the music the pianist composed for a film by Kira Muratova and is the first foreigner to win the trust of the eccentric 89-year-old Russian composer and performer who sadly, passed away, early in 2016. So this film is also a rare and the only tribute to the gifted musician offered by the Western film director.

Several biographical facts: Oleg Nikolayevich Karavaychuk (born 1927) played the piano for Stalin as a child prodigy, attended the Leningrad Conservatory and in the course of his career primarily wrote music for theatre and film – for instance, for Paradjanov and Muratova. In Russia, he is admired for his music and his playing, but also for his unique and eccentric personality. At the age of 89, Karavaychuk is still a controversial and puzzling figure in Russian culture.

The beautiful film that Andrés Duque made about him is a gift to the viewer, a gift from an old artist who wants to be reconciled with the world and who transports us away from reality with words, gestures and piano playing, free of social conventions, to a world where clashing dissonance has a liberating beauty.

The film also premiered on MUBI on Friday 9 June. You can enjoy a free 30-day trial of MUBI here.

He has released many recordings and toured internationally since 2001. His music has been used extensively in international film, television, commercials, radio and arts projects.

He has made many appearances on UK and international radio and is closely connected with the London arts world and institutions with commissions for the BBC, Tate Modern, the British Film Institute and the Victoria and Albert Museum.

Since 2006, Stephen has been performing in Russia and working on various Russian music-related projects.

Since 2014 he has been instrumental in bringing to the West the music of one of the most significant of modern Soviet film composers, Mikael Tariverdiev.

His arts company Antique Beat have been producing and curating boutique events, music and publications for the last seven years.

New East Cinema is a bi-monthly film series curated by The New Social, presented by Calvert 22 Foundation in collaboration with the Barbican Centre, which looks across eastern Europe, the Balkans, Russia and Central Asia to uncover the most thought-provoking, daring and vibrant cinema coming from today’s “New East”.

Olga Jegunova – growing up in the USSR, is music a man’s world?