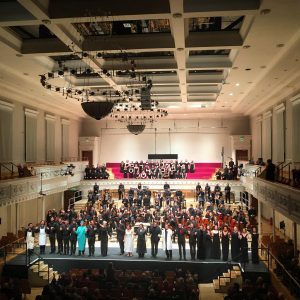 On December 3rd 2017 one of the best Russian operas of the XX century – The Fiery Angel by Sergei Prokofiev – was performed in Glasgow for the first time. A concert performance of the opera was staged by Scottish Opera and the Royal Conservatoire of Scotland. Held at the Glasgow City Halls, it has become one of the most vivid and memorable musical events of the year.

Today, The Fiery Angel adorns the repertoire of the best opera houses in the world. However, this brilliant work, which Prokofiev intermittently composed for approximately eight years and which he considered his best work during his time abroad, surprisingly did not find its way to the opera stage for a number of years.

Recall that after the revolution Prokofiev, from 1918 to 1936 lived outside of Russia – first in the US, then in Germany and France. The Fiery Angel was created by him during the period from 1919 to 1928. A novel of the same name by Valery Bryusov served as the foundation for the plot about life in medieval Germany under the Inquisition.

The composer, who died on March 5, 1953, never got to hear his favourite creation: The Fiery Angel was first performed in a concert version on November 25, 1954, in Paris by an opera troupe under the direction of Charles Bruck. Recorded for the gramophone, this performance prompted interest in the opera. In 1955, The Fiery Angel was staged in Venice at the Teatro La Fenice and in the following year at the La Scala in Milan. The initiative was picked up by opera companies in Spoleto, Trieste (1959), Cologne (1960), New York (1965), Frankfurt am Main (1970), etc. In the same year, the Frankfurt company brought The Fiery Angel to the Edinburgh Festival in Scotland. The next time the production was performed in the UK was only in 1991 by the combined forces of the Royal Opera House Covent Garden and the St. Petersburg Mariinsky Theatre. Since that time, the staging of Prokofiev’s opera in this country has not been undertaken.

The performance of The Fiery Angel is very difficult from the production point of view: it needs of an expanded orchestra and a large chorus, it is beyond the normal resources of most opera companies. Prokofiev’s opera is distinguished by the power of the music, the drama and the philosophical depth, the very complex intonational and rhythmic contour of the parts – instrumental as well as vocal. The orchestral element of the opera is so significant that on its basis the composer had created his Symphony #3 (C minor, op. 44) for expanded symphony orchestra.

The main characters – Renata (dramatic soprano) and Ruprecht (baritone) – must have not only powerful, flexible and robust voices, but also an uncommon gift for acting. It is they who carry on their shoulders four out of five acts of the opera, though the main burden is actually carried by Renata. The heroine is silent only in the second half of the 4th act, which unfolds in a tavern where two new characters appear on the stage – Faust and Mephistopheles. There are many other dramatis personae in the opera, which, as a rule, sing on the margins of large episodes, built on the dialogues of the main characters.

The whole might of the performers’ capacities crashes down on the listeners in the last, 5th act of the opera. The act contains a scene of exorcism in a convent, performed by an inquisitor who at length condemns Renata to being burned at the stake.

A guest director – Max Hoehn – had done everything possible to bring in some modest elements of stage action into a concert performance and to use to the maximum the space of the city hall. The singers not only sang, but acted their roles, appearing on the balcony and the gallery as well as the stage.

In Glasgow, where Mikhail Agrest was the guest conductor, the main roles were played by Svetlana Sozdateleva (Renata) and Evez Abdulla (Ruprecht) – artists already known for these roles in The Fiery Angel, experience which guaranteed their mastery of the roles in this performance. A number of other smaller roles were also performed by guest soloists. The Fortune Teller was sung by Agnieszka Rehlis; The Hostess of the Inn and The Abbess by Maria Maxakova; The Inquisitor by Alexei Tanovitski; Agrippa von Nettesheim by Dmitry Golovin; Mephistopheles by Luke Sinclar.

The lesser roles and the ensembles were assigned to the students of the Alexander Gibson Opera School, part of the Royal Conservatoire of Scotland. The chorus also was composed exclusively of vocal students; the orchestra was expanded thanks to the conservatoire.

For the oldest conservatoire in the United Kingdom, which celebrates its 170th birthday this year and which ranks third in the prestigious QS World Rankings 2017, this project had an enormous significance and deservingly became a part of performing history of the conservatoire.

It should be noted that operas by Prokofiev occupy a special place in the conservatoire. The project of staging a number of the composer’s operas, never beforehand performed in Glasgow, begun at the conservatoire in 2006.  To courage to attempt such a bold venture came from the partnership with Rostov State Rachmaninov Conservatoire (Glasgow and Rostov-on-Don are twin cities). In 2009 the joint forces staged a production of Prokofiev’s Love for Three Oranges (1919), and a year later the first edition of the epic opera War and Peace (1941/42) was staged. In both cases the orchestra of the Scottish Opera would come to the aid of the conservatoire.

The concert performance of The Fiery Angel differed from those productions in that it was not, if I may say so, an ‘academic’ venture: the forces of the conservatoire – around a hundred people – came to the aid of the theatre, which invited a list of professional operatic singers for this project. The Rostov Conservatoire did not take part in this case: the staging of the opera was the work of exclusively Scottish musical institutions.

The material was translated by Ivan Tudorov

Other Articles By Svetlana Zvereva 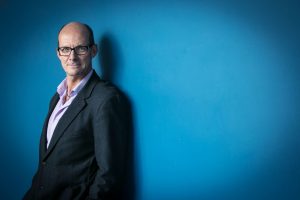 Staging “Fiery Angel in Glasgow”. Interview with Philip White, Head of Opera at the Royal Conservatoire of Scotland