An exhibition of objets d’art by Carl Faberge to mark the hundredth anniversary of the 1917 revolution for five days only from Tuesday 7th to Thursday 30th November 2017, 10.00am to 5.00pm, admission free.

An aquamarine and diamond pendant, purchased by owager Empress Maria Fedorovna of Russia, circa 1895

The 7th of November is an ordinary day for most of us but this year it is going to be 100 years from the day that changed the world. On the 7th November 1917 the Bolsheviks led their forces in the uprising in Petrograd, the capital of the Russia at the time, against the Provisional Government that had been established immediately following the abdication of Tsar Nicholas II on the 2nd March 1917.

The events of 1917 put an end to the Romanoff dynasty who had ruled the Russian empire for more than 300 years. During these centuries the Romanovs lived an extraordinary litany of tales of love and glory, drama and sensations, adventure and mystery. The Romanovs were renowned for their immense and breathtaking collection of jewellery and art. One of the most famous jewellers of the Russian Royal Court was Carl Faberge. Fabergé produced the very first of the Imperial eggs. The Hen Egg was given as a gift from the Tsar to his wife Maria Fyodorovna on Orthodox Easter 1885. So delighted was she that on the 1st of May of that year the Emperor assigned Fabergé the title Goldsmith by special appointment to the Imperial Crown. That was the beginning of an intimate relationship between the Russian Royal Court and Faberge. Soon Faberge became one of the symbols of Russian Royal Court and the name Faberge has become synonymous with the Romanovs and Imperial Russia. The House of Fabergé won international awards and became Russia’s largest jewellery firm employing some 500 craftsmen and designers, with shops in Moscow, St. Petersburg, Odessa, Kiev and London. 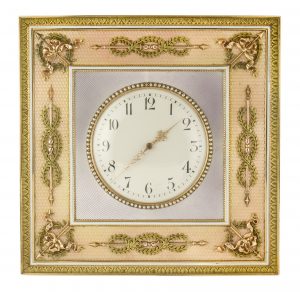 Bentley and Skinner’s exhibition ‘’Fabergé and the Russian Revolution’’, an exhibition of objets d’art by Carl Faberge to mark the hundredth anniversary of the 1917 revolution, demonstrates the contrast between the worlds of the Russian Imperial Court and the revolutionary proletariat. The exhibition includes Bentley and Skinner’s collection of Faberge which was created over decades and initiated by John Sheldon, the great uncle of the company’s current Managing Director, Mark Evans. John Sheldon’s Russian father, Leon Schlounde who was to establish gold refineries in South Africa before moving to London, had been a friend of Vladimir Lenin and fled from Moscow to Paris to escape the Tsarist secret police. Who could have guessed that a young Russian communist was behind the establishment of Bentley and Skinner, jewellers By Royal Appointment to Her Majesty the Queen and His Royal Highness the Prince of Wales, who are presenting this exhibition?