On 30 April 2021, at 7pm GMT, Klassiki, the world’s first ever video-on-demand (VOD) platform dedicated to classic cinema from Russia and the region will host a Q&A with star actor Alisa Khazanova, followed by a screening of festival crowd-pleaser “The Humourist”. 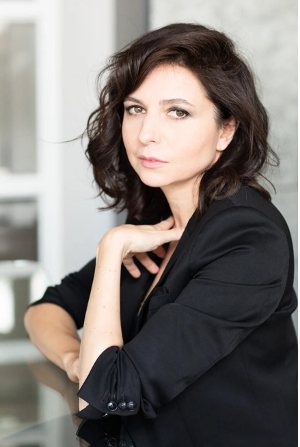 Alisa will sit down with Klassiki Founder Justine Waddell to discuss growing up as the daughter of famed Soviet comedian Gennadiy Khazanov, working in both Russian and English film and pre-production on her second film as a director. Born in Moscow to Russian actor and comedian Gennadiy Khazanov, Alisa began her career as a ballet dancer. Appearing in both Russian and English blockbusters, she is known for The Woman in Black (2012), and Tale in the Darkness (2009). Her 2017 directorial debut, Middleground, premiered at the Moscow International Film Festival. She is in pre-production on her second feature, The White List.

“The Humorist” is set in the final years of the Soviet Union. We follow a week in the life of Boris, a stand-up comedian tormented by external censorship and self-loathing. Taking inspiration from Eddie Murphy’s American style insult comedy, Boris takes revenge by trying out a new insult-style set at a high-ranking official’s birthday party with killer results. A highly watchable and whip smart social satire from Latvian born Michael Idov. Co-scripter of Kirill Serebrennikov’s Leto, The Humorist is Idov’s directorial debut.